Gavi Siddayya of Silicon City Academy of Secondary Education (SCASE) became the surprise winner of the Karnataka State Amateur Chess Championship by scoring an unbeaten 7.5/8. Despite starting out as the eighth seed and drawing his round 3 game, Gavi managed to win the tournament. Top seed FM Yashas D finished half-a-point behind the champion at 7.0/8 and secured the first runner-up position. Second seeded Vinayak Kulkarni suffered the only loss against the eventual champion of the tournament, scored 6.5/8 and secured third place. The tournament was organized by Innovators Chess Academy from 25th - 28th April 2019 at SCASE. Photo: Sushrutha Reddy 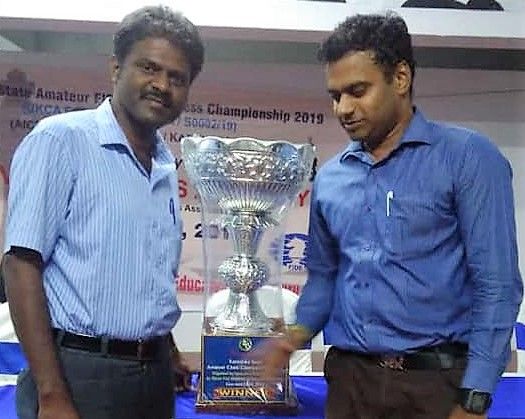 Starting from the sixth Round, it turned out to be a tense fight between several players - including the Organiser Sushruta Reddy himself. At the end of the fifth Round, the two players - Anand Vittal T R and Sushruta Reddy shared the lead with 5 points each. Anand Vittal  prevailed over Sushruta Reddy who took unnecessary risks in a drawish ending to propel his opponent into sole lead with two Rounds remaining. In the penultimate round, the much experienced Vinayak Kulkarni totally outplayed Anand Vittal. The lead was now shared between Gavi Siddayya and Vinayak Kulkarni with 6.5 points apiece. 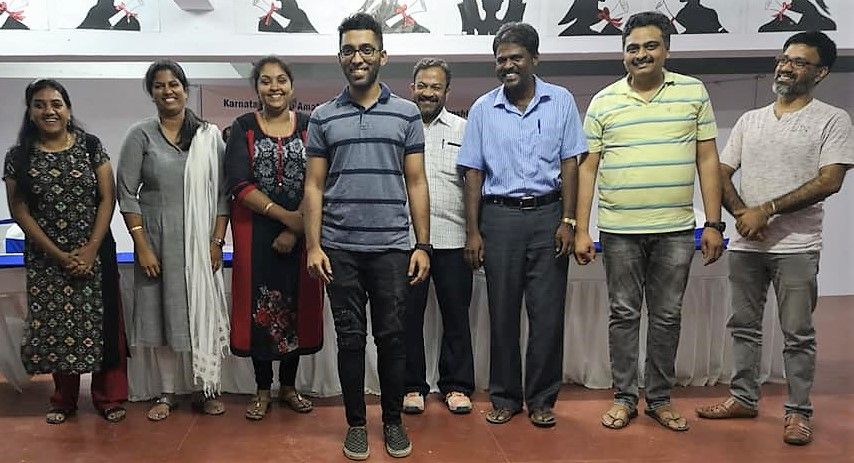 The vast gulf in rating between Vinayak Kulkarni (2200) and Gavi Siddayya (1861) mattered little as the two players know each others' games quite well and have been room mates in several FIDE Rating Tournaments, besides having prepared together as well. In the final Round, Vinayak Kulkarni had kept Gavi Siddayya on the backfoot in a game arising out of one of the side lines of the Kings Indian Defence. However, Vinayak Kulkarni uncharacteristically made a pawn and a piece blunder in the middlegame to suddenly hand over the game and title to Gavi Siddayya on a platter. Gavi Siddayya became the Karnataka State Amateur Chess Champion with a score of 7.5 out of 8 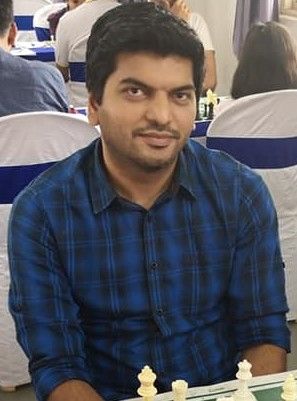 Speaking at the Prize Distribution, Gavi Siddayya thanked Deepak Kumar Payeng (his mentor), T.J.Suresh Kumar and his coach Srinath Narayanan who played an instrumental role in improving his game during the past couple of years. He further revealed that it was Sushruta Reddy who pulled him out of his profession (he was a CAD Designer) and brought him full time into Chess ten years ago. Gavi Siddayya also added that the win came primarily due to maintaining a fitness regime over the past few months. He emphasized the importance of mental and physical fitness that aided him in decision making during critical moments of the games.

The tournament had a Prize fund of Rs 2 lacs, attracted 221 Players with the Ekalavya Awardee Yashas Devappa being the top seed of the event. Yashas who probably played his last FIDE Rating Tournament in Bangalore as he is going abroad to pursue MS, finished second with a score of 7.0/8.

The Bangalore Open donors, Sahana Subramanya, Swapna Shivakumar, Rajeshwari, Shilpasri Kalpaka, Kannan, Srinivasan and the Chief Arbiter Saleem Beig gave away the Prizes. The Trophies of Innovators Chess Academy were as always some of the major attractions and were on the minds of most children.

Sushrutha Reddy is a well-known organiser who has been promoting chess at the grassroot level in Bangalore, Karnataka. Currently a chess coach at four schools, he has worked as the Joint Secretary of United Karnataka Chess Association and had been the chief arbiter at almost all tournaments in Bangalore held between 2000 and 2003. He is an occasional writer and had written the cover story on the Fischer-Spassky World Championship Match for The Week magazine in the past. Besides this, he owns the Innovators Chess Academy which has organised more than a hundred Chess Tournaments during the last thirteen years.