Frederic Friedel in India - Part I

In January co-founder of ChessBase and former editor-in-chief Frederic Friedel took a trip to India, to visit his partners at ChessBase India, to visit two big GM Opens, and to meet some of the incredible young talents the country is currently producing. There was a preteen grandmaster, a number of candidate GMs in their very early teens, and a delightful U12 girl's world champion. Frederic made many new friends, but he also used the opportunity to conduct his famous talent test on them. Here are the results and a biographical video.

Republished from chessbase.com with their kind permission

For my flight to Mumbai I chose Emirates — it is very reasonably priced and quite comfortable. I especially appreciate that I can catch the flight in Hamburg in the late afternoon, and have a 6½ hour flight to Dubai. You arrive just after midnight local time and have a 2:40 hour stopover at the sprawling airport. After that it is a three-hour flight to Mumbai, where you arrive in the early hours. The only disadvantage of the Emirates night flight: as soon as you manage to fall asleep they wake you up and feed you. Well, at least the food is excellent, and the on-flight entertainment with the latest movies, series, music, news is wide and diverse. Just remember to take your noise cancelling headphones along — that makes a world of difference. 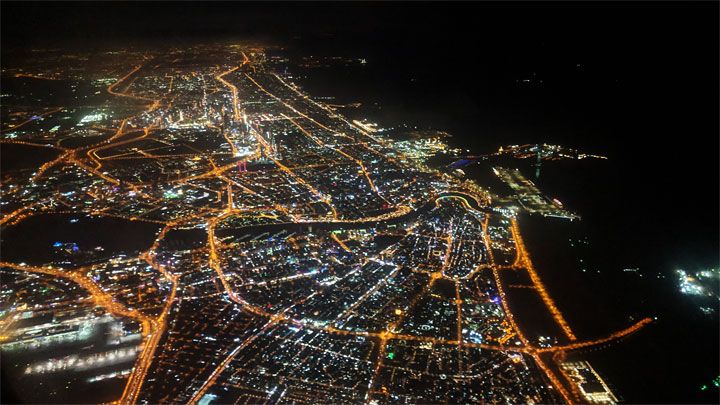 Mumbai's Chhatrapati Shivaji International Airport is the second busiest in India. Immigration is quick and efficient, and I find Sagar and Amruta are waiting to pick me. They are the founders of ChessBase India and running it with great dedication and many new ideas. They take me to their home and want me to "rest," but there is a major GM tournament in the city, where I am scheduled to meet the VIP guest Vishy Anand. So zombie Fred proceeds to the GM Open. 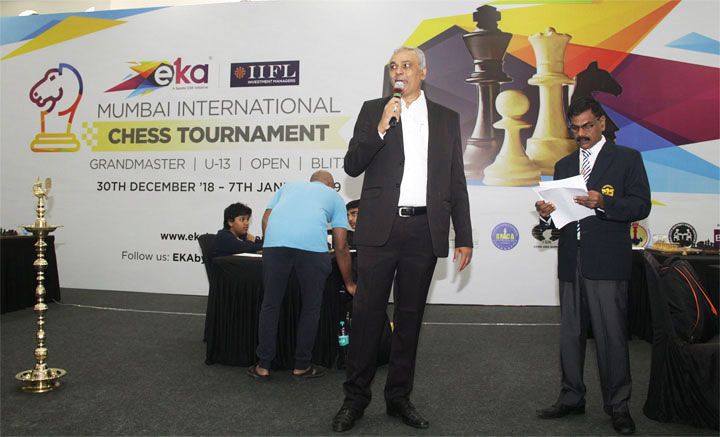 The IIFLW Mumbai International Chess Tournament is organized and run by Praful Zaveri (above), who is one of the most active organisers in India. He is also an old friend and greeted me with great warmth. We strolled around the tables and I saw something quite remarkable. 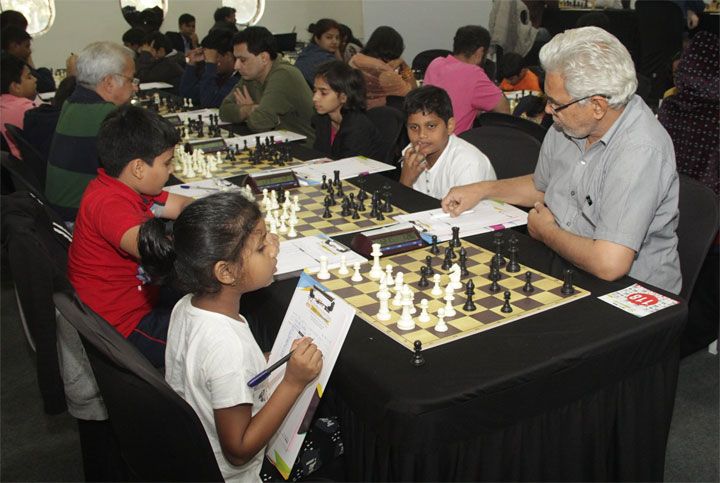 All over the tournament hall I saw little children playing in the Open. Your first impression is "How cute, so young and already knows how the pieces move." But on the other side of the board there is often an adult player, usually suffering! These kids are sharp as tacks. I met half a dozen pre-teen players who are approaching GM strength, and tell you more about them in a later article.

One of the young players I met was Savitha Shri, eleven years old, who two months earlier had won the World U12 Girls Championship in Santiago de Compostela, Spain, with 10 out of 11 points. At the time she was rated 1745, but had now climbed to 1900 (I guarantee she will be over 2000 in a month or two). Gukesh, whom we will come to in a second, won the U12 Open in Santiago with a score of 10/11, a point and a half ahead of the field. 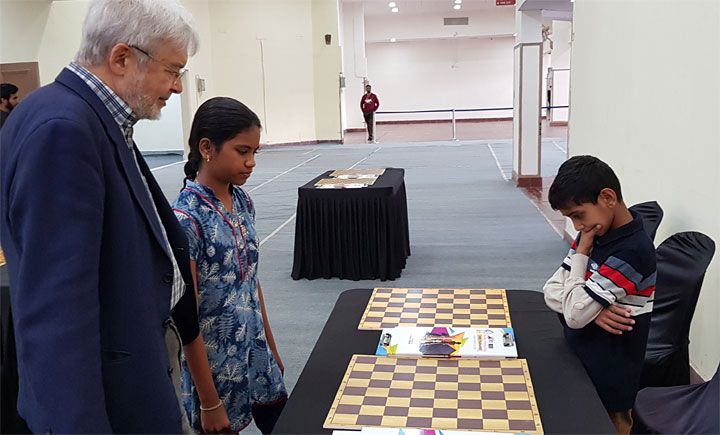 Savitha and an impossibly young boy were my first victims: I gave them my famous talent test problem which I have used on literally dozens of top players when they were very young. That means I have a lot of data on who was able to solve it in what time. Naturally it has to be solved without pieces, all in the mind, which Savitha gladly undertook. 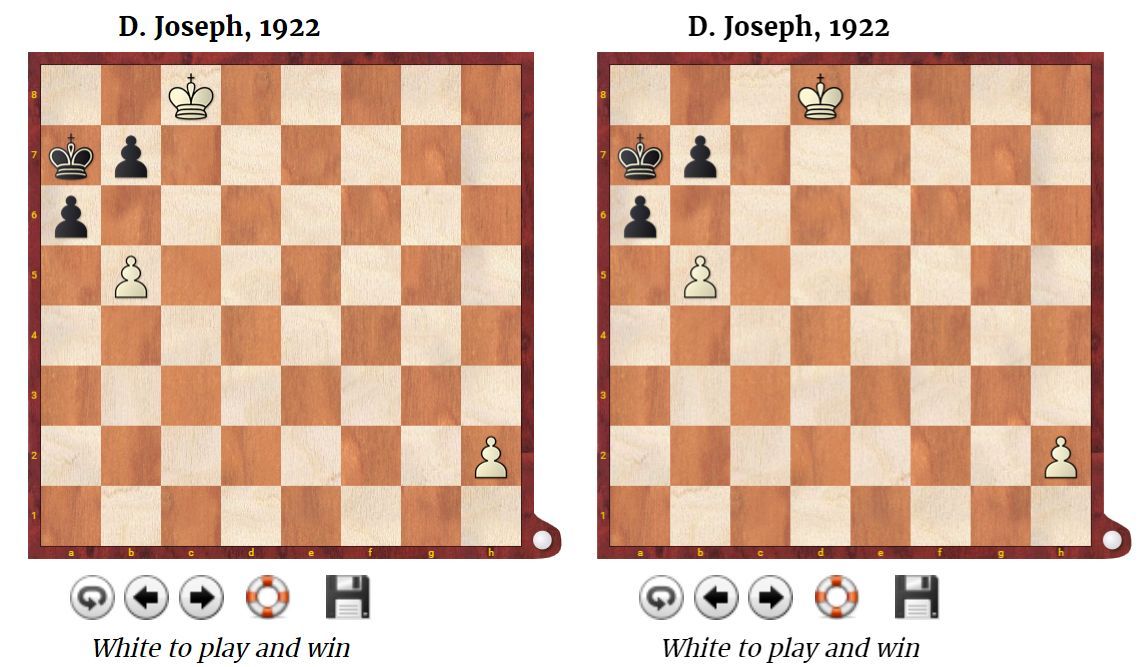 If you do not know this test, and if you are brave, you will do the following: look at the first position, then try to solve it in your mind. Make a note of the time it takes you to work out the white win. Also, think at least briefly about why other moves do not work.

Now do the same for the second position: find the win for White in your mind, without moving the pieces. Make a note of the time it took you if you succeeded. Do not, of course, give the solutions in our feedback section at the bottom of the page — pox on your house if you do. Just tell us if you succeed (or not) and how long it took you.

Now back to Savitha. She solved the first position, which I had dictated, in a few minutes. Then I told her to move the white king in the initial position from c8 to d8. It took her about thirty seconds to figure out why that made a big difference, and then she got to work on the more difficult study. The following short video shows her doing it.

Watch the girl's eyes moving the pieces on the empty board. She did not manage to solve the second position, but — and this impressed me no end — she spent 25 minutes thinking. Nothing could distract her, not the lad opposite her, not people who were waiting to place pieces on the board. Watch her searching for a win and tell me this girl does not love and cherish chess.

Fundraising for a champion

After reading about Savitha in ChessBase India, Deepan Subbiah, a digital product engineer living in London, started a fundraiser for the girl. Deepan writes:

"Savitha is the reigning world girls under 12 champion, but her family are struggling to make ends meet and getting her to play international tournaments is an expensive activity. So we are currently running a crowdfunding campaign called 'CheckMates' to raise funds for Savitha..." Chess fans can contribute on this Gofundme page. 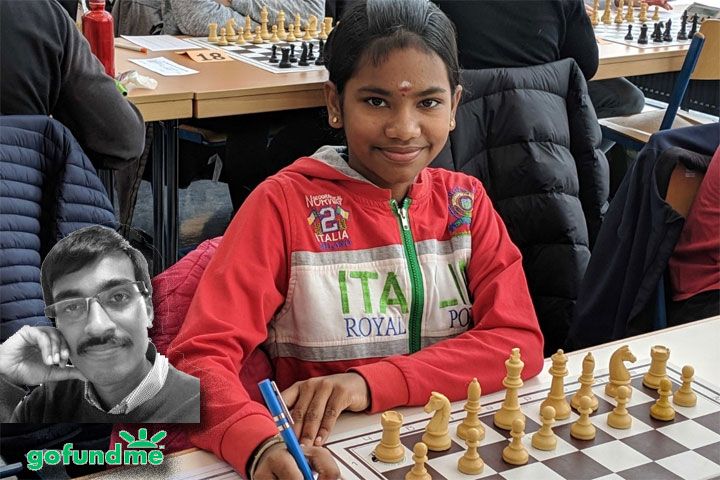 Then along came Gukesh...

He was the lad I was really eager to meet. We had written about him, and how at the age of twelve he was close to making his final GM norm to become the youngest grandmaster in history. When I met him this chance had passed — he was already a few days older than Sergey Karjakin had been when he got his title. But (spoiler alert): when I visited him again ten days later, in his home in Chennai, he had just completed his third norm and was a full GM, the second youngest (by a small margin) in history. 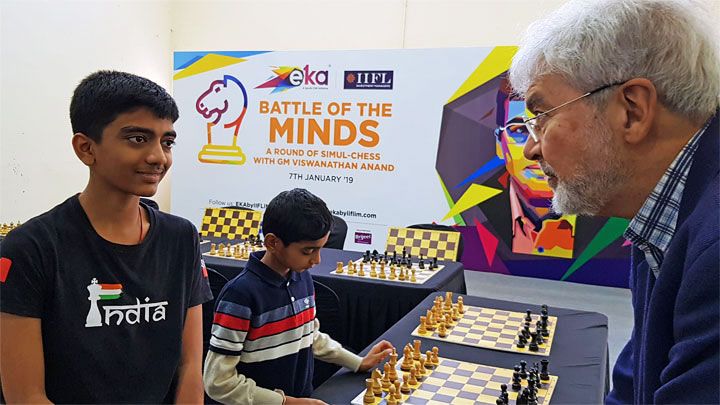 Gukesh was a very pleasant lad, a bit shy at first, but (like Savitha) ready to abandon the "uncle" and "sir" that Indian kids are brought up to use, in favour of Frederic or Fred. And he stuck to it, unlike India's number two GM Pentala Harikrishna, who spent a full year calling me "Freddy uncle". I chatted at length with Gukesh, and his father Rajini, who is an ENT surgeon. But at some stage could not resist: I gave the boy my talent test puzzle. 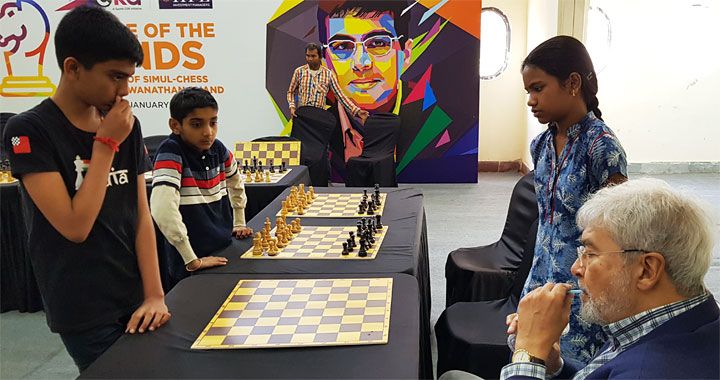 Gukesh started off by trying to recall my talent test position, of which he had heard. He could not remember the solution, but after about four minutes, with a little help from Savitha (she told him what didn't work), he had figured everything out. In the video below, from 7:33 minutes, you can watch him showing us the full solution, on an empty board at great speed.

As I write these lines, I see that Gukesh has just completed the 9th HD Bank Open in Vietnam, with 25 GMs, including 2700s. He finished in equal second place, scoring 7.0 points from nine games. His rating performance (hold on to your hat) was 2700! I have to remind myself: the lad turns thirteen in a little over two months. Incidentally, looking at the results of the event I notice that 22-year-old WIM P.V. Nandhidhaa, whom I met at the London Chess Classic back in 2011, came equal 12-23 and gained 74.2 rating points in the process.

In Mumbai, I was introduced to half a dozen young talents of similar calibre (I think they grow them in fields). And they all got my talent test dictated to them. A couple knew it from previous articles on our news page. Here's someone who didn't: 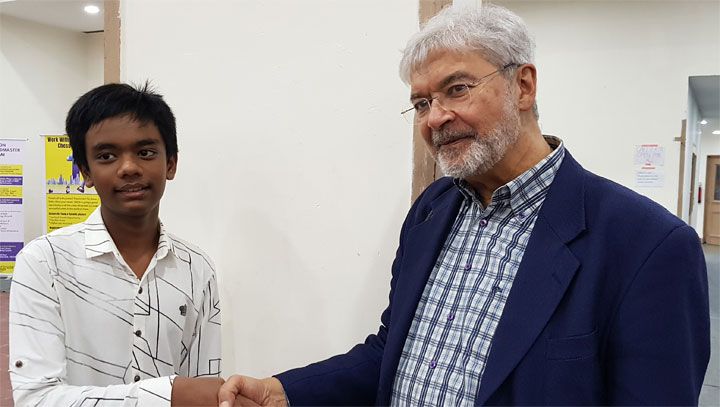 This is Zia Tahsin Tajwar from Bangladesh, son of GM Ziaur Rahman. Zia is 13 and currently rated around 2000. After the obligatory picture above was taken I simply dictated the position to him. He was slightly baffled — people you meet briefly and for the first time don't usually throw chess puzzles at you. He tried a few moves, which I refuted, and then left the venue. Fifteen minutes later he was back, flushed and out of breath: "I solved it!!" he said, gleefully, and rapidly dictated the correct strategy for White to win. 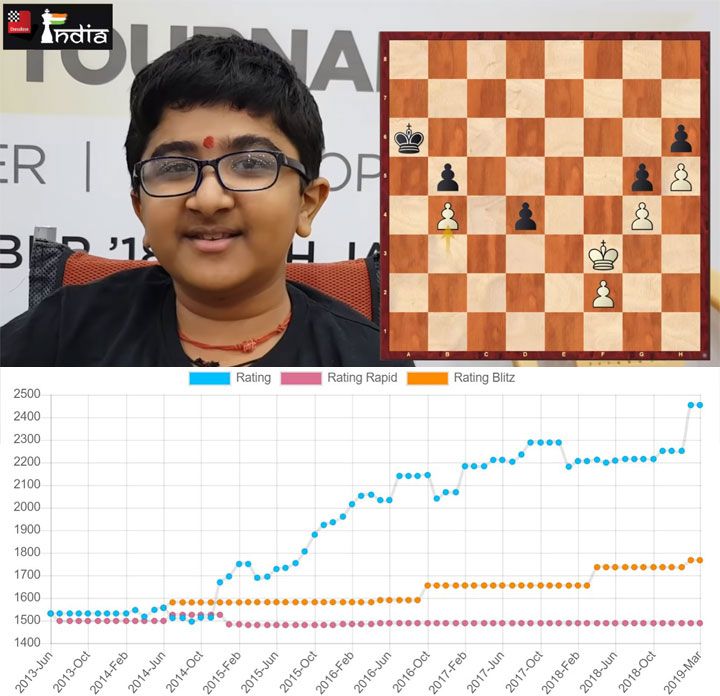 Another kid I befriended: Aditya Mittal was playing in a wheelchair after fracturing a leg and an arm. He was on his way to becoming an IM, and I now discover he made his final norm a month later, at the Aeroflot Open. Aditya's story is one of grit and determination. You can read all about the lad here in ChessBase India.

I continued with my experiments in Mumbai and ten days later at a GM Open in Chennai. Sagar watched all of this transpire and then, during breakfast in Bangalore (check the bright sunshine in early January!), set up his video camera and made me describe the history of my talent test.

I continued with my experiments in Mumbai and ten days later at a GM Open in Chennai. Sagar watched all of this transpire and then, during breakfast in Bangalore (check the bright sunshine in early January!), set up his video camera and made me describe the history of my talent test.

The full solution is included in the last part of the above video. I'm afraid this is the end of my talent test. In Mumbai, I saw a number of young players puzzling over it on chessboards — the super-talents had rushed off to show the puzzle to their friends. So in the future when I meet a budding young player and say: "I want to give you a puzzle to solve..." they will answer: "You mean the 1.b6+ talent test?" Well, it has served me nicely for almost forty years, with hardly any top player who has not been confronted with it.

One more thing: as I mentioned above I was scheduled to meet Anand at the event in Mumbai. He arrived soon after I got there, and this is how he was welcomed:

Eat your heart out, Magnus. He may be received by Very Important People, like Gates, Zuckerberg and Soros, but Anand gets trumpets, drums and dancing girls. Quite a different category. 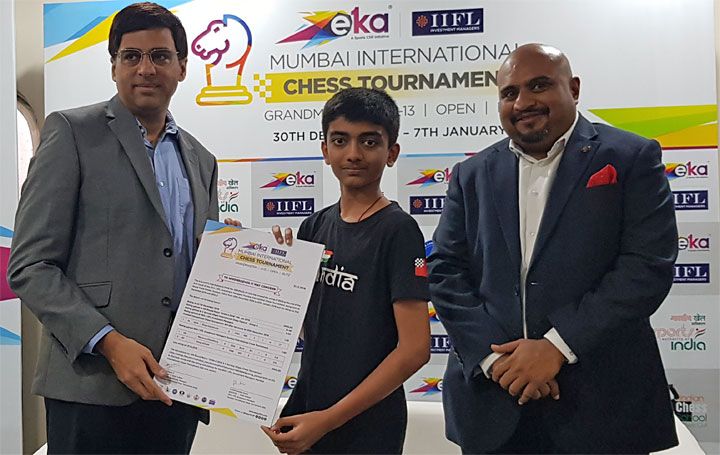 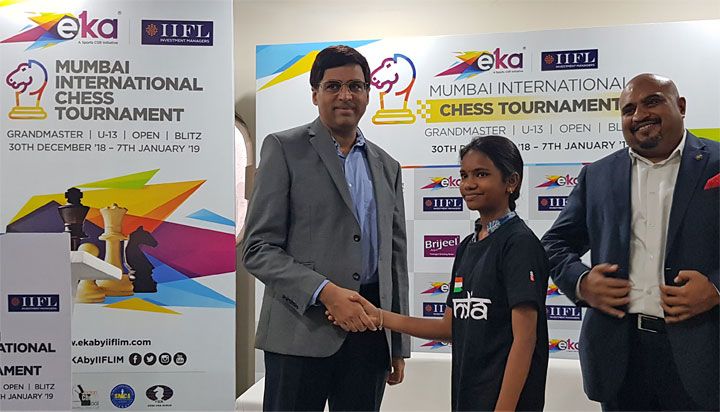 Savitha gets to meet her hero as well. Incidentally after reading about the U12 World Champion a London-based chess lover decided to sponsor her chess career — an the inspiring story. 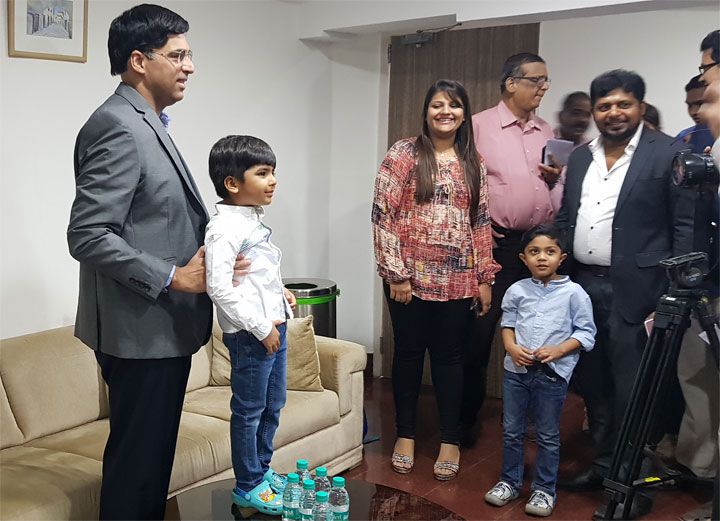 And finally: Anand encourages another chess talent, one that has no GM norms...yet 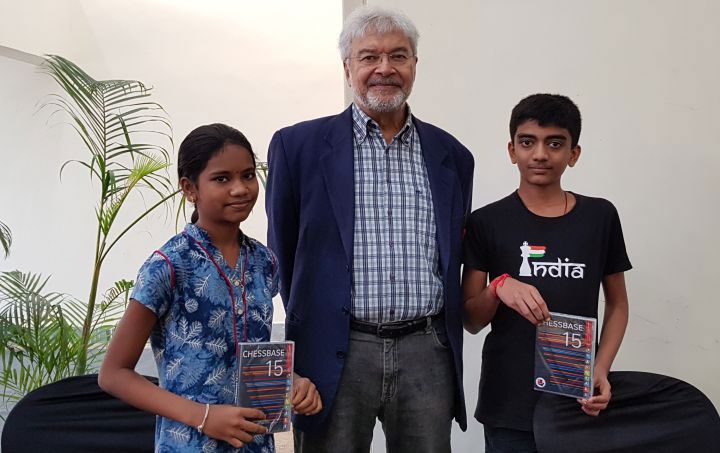 And from me, in return for working so nicely with me, Savitha and Gukesh got ChessBase 15. I also did a number of logical (non-chess) puzzles with the two, and with maybe a dozen other youngsters. They were even more enthusiastic about them. Want to hear about that?