Aleksandra Goryachkina beat Ju Wenjun in Game 5 to equalize the score 2.5-2.5 in FIDE Women's World Championship Match 2020. Ju made a questionable sacrifice of an exchange in the middle game and landed herself in troubled waters. Later in the Double Rook vs Rook and Knight endgame, Ju got a chance to make a comeback but she made an incorrect decision of retreating her knight and lost the game in another 15 moves. The final game in Shanghai, China, Game 6 will be played on 12th January at 3:30 p.m. local time, 1 p.m. IST before both players move to Vladivostok, Russia to play the remaining six classical games from 16th January. Photo: Zhang Yanhong / FIDE

Aleksandra Goryahkina bounces back and beats Ju Wenjun in the fifth game of the 2020 FIDE Women's World Championship Match. The challenger sets the score to 2½-2½ after five games, with only one left to be played in Shanghai; the remaining six games will be fought in Vladivostok. 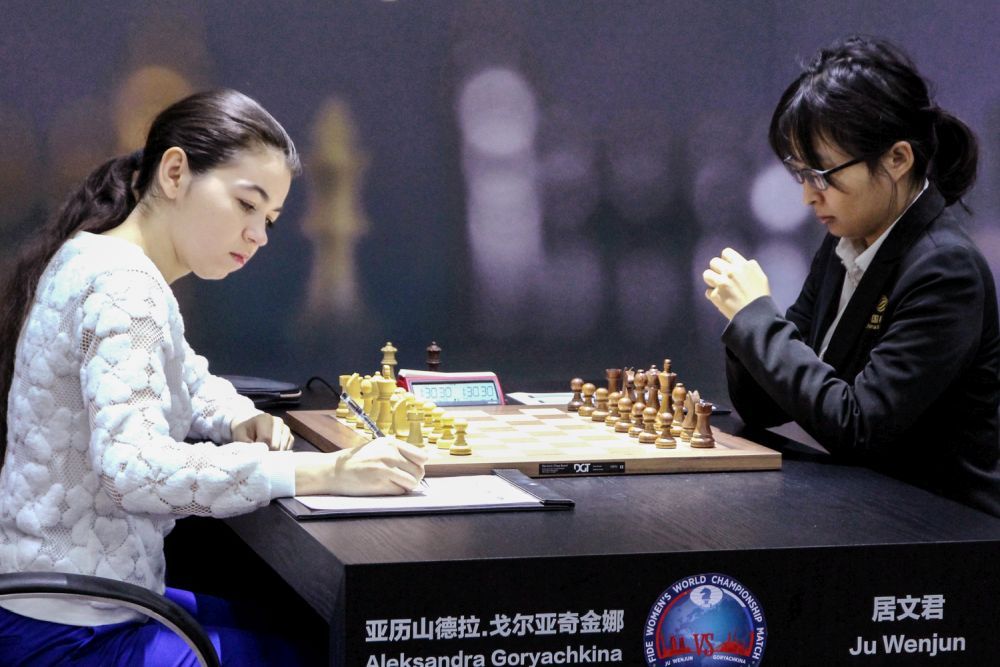 Before today, Aleksandra Goryachkina has never beaten Ju Wenjun. In fact, prior to the match, the Russian Grandmaster has never had a better position against the World Champion in any of their games. However, Goryachkina is a very young player still at the peak of her development, and already in the first games of the match she showed she could put Ju Wenjun against the ropes. 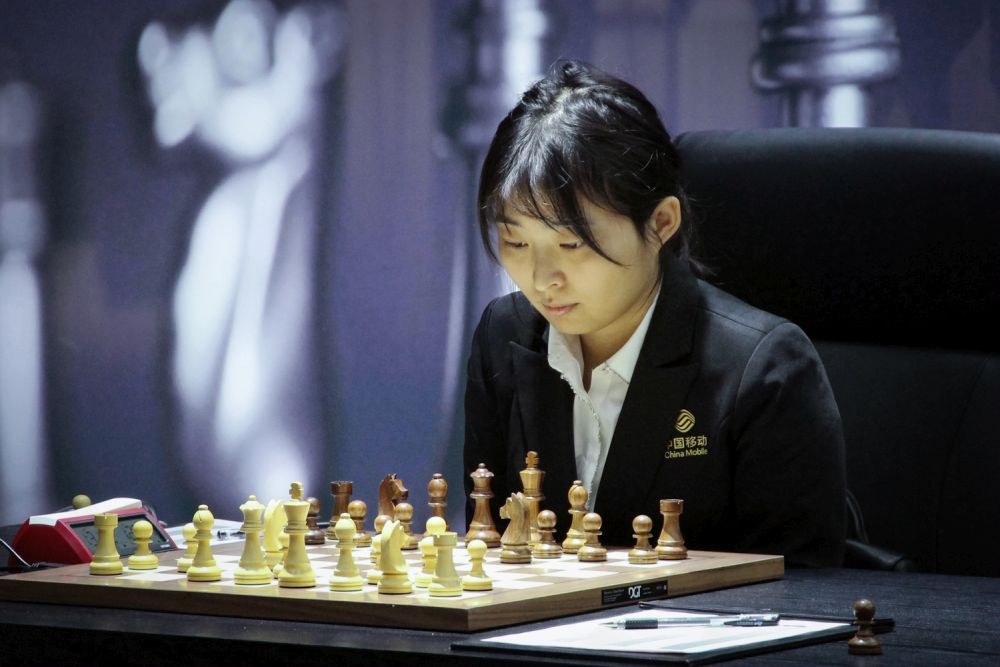 In that context, Goryachkina's defeat in the fourth game was a cold shower for the Russian fans, but the challenger did not display any signs of disappointment. And after a rest day, she came back to the board ready to put up a fight, and with today's victory, Goryachkina demonstrated the world that she belongs in this match and is the rightful challenger. 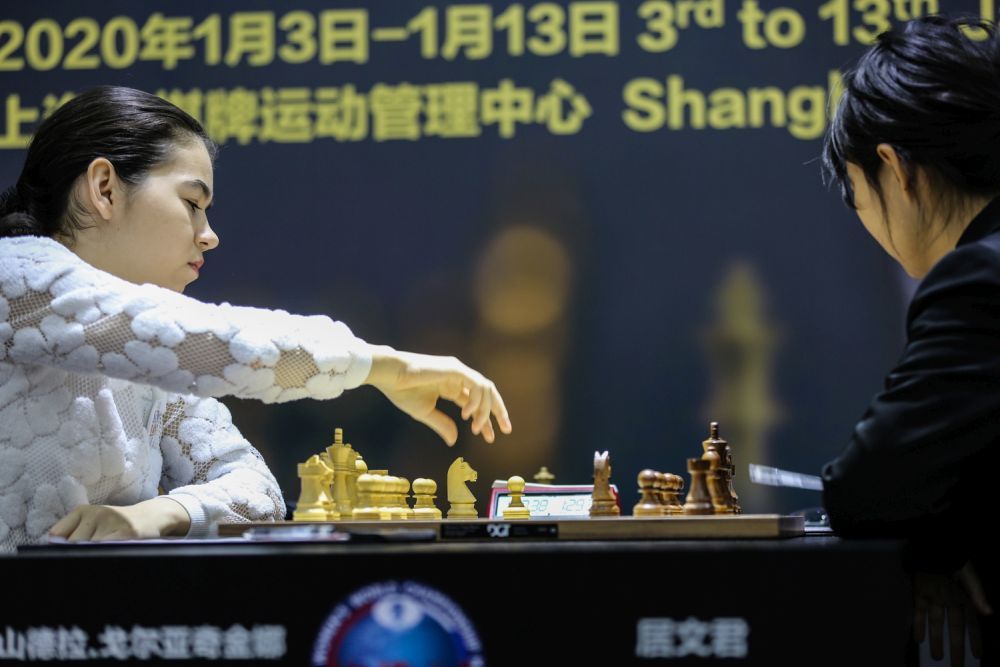 Goryachkina appeared to have surprised her opponent with 1. c4, which sent Ju into a short think. In the ensuing English Opening, players went for very sharp lines, with Ju producing the first novelty 12... Be4. This seemed to have taken Goryachkina out of her preparation and black quickly achieved a very promising position. 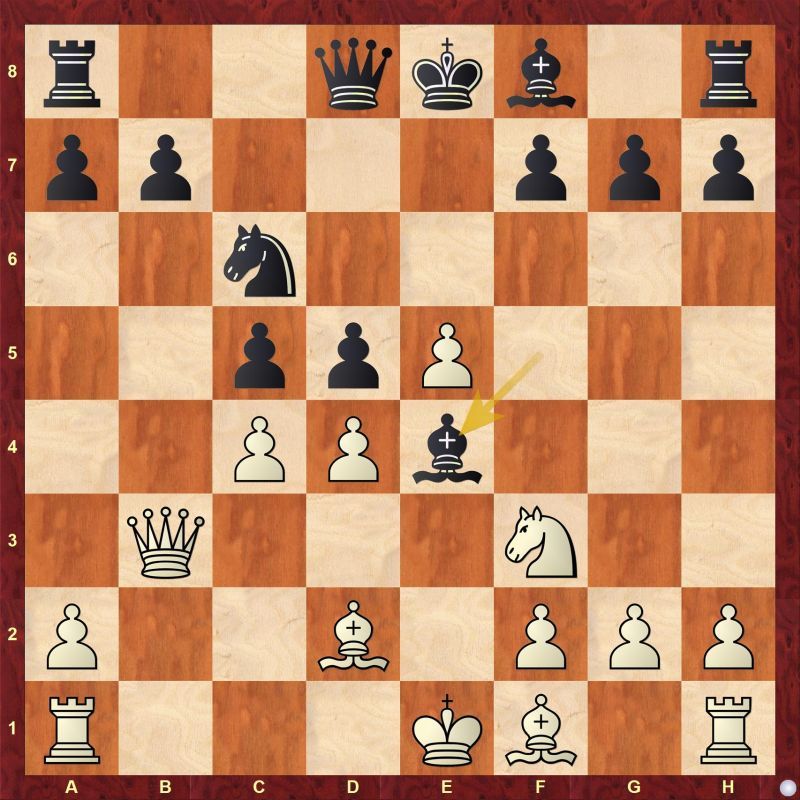 However, facing a 16.Qb5+, Ju went astray with 16...Qd7, unnecessary opting for a variation in which Ju sacrificed an exchange, with black having some compensation for it in a form a very unpleasant d pawn. Interestingly enough, in the post-mortem, Goryachkina thought that Ju simply blundered the exchange. 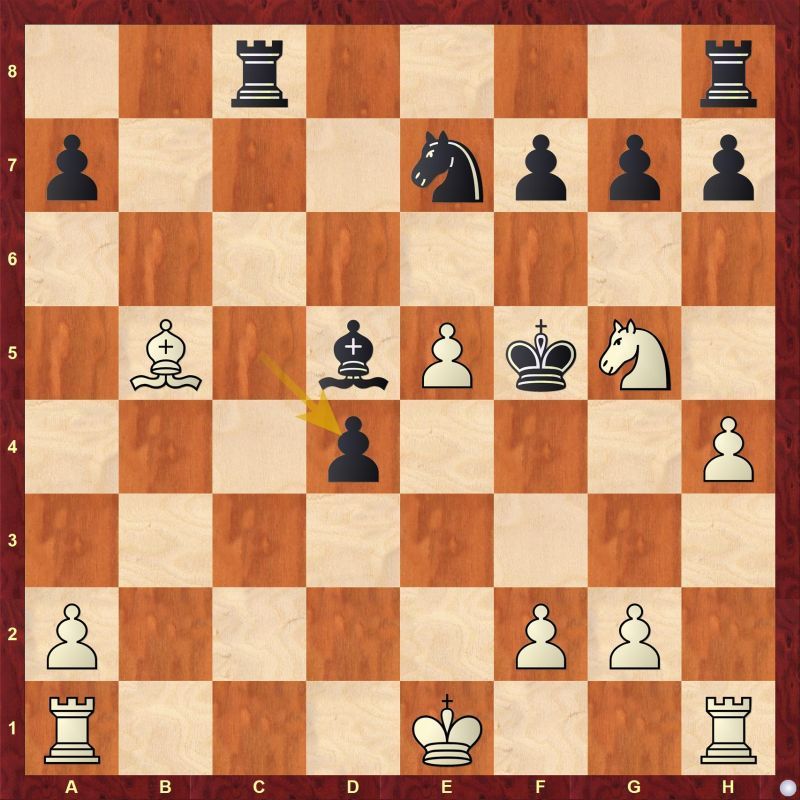 Ju made a questionable choice of sacrificing an exchange with 21...cxd4

Computer analysis showed a considerable advantage for white, practically the game was close to over. It seemed that Game 5 would follow a familiar theme from Games 1 and 3 where the Russian obtained comfortable positions out of openings, but squandered her chances with some little inaccuracies right before the first time control. In today's game, after 29...g6? and 31.Rxf7? the game appeared to be headed for a draw, but a serious blunder by Ju 34...Nc6?? allowed white to consolidate her advantage, and black resigned fifteen moves later. 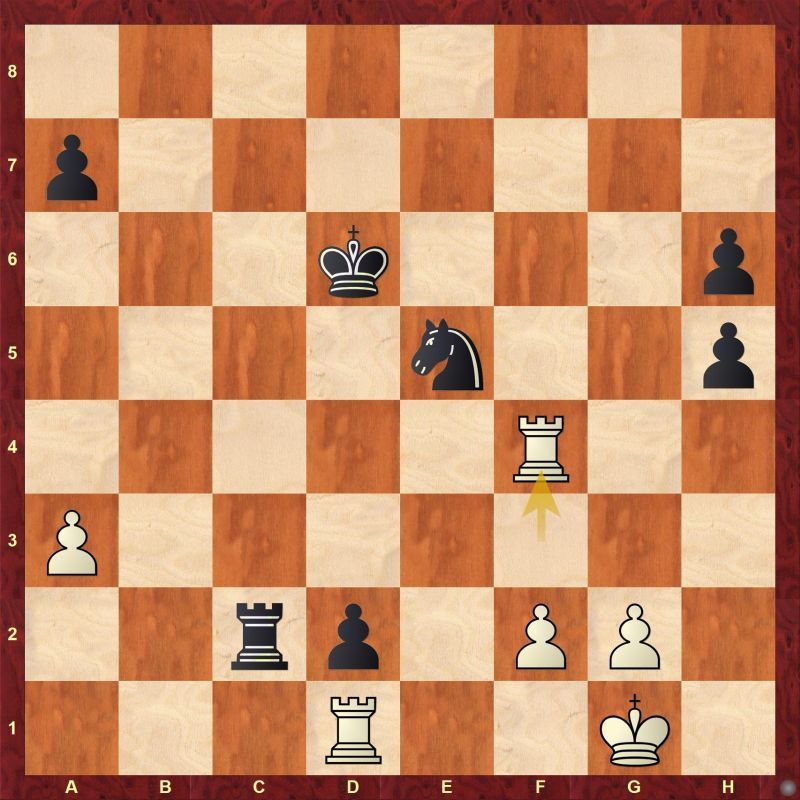 Ju made a questionable decision of playing 34...Nc6. What did she miss?

Ju got one last opportunity to get back in the game but she made an incorrect retreat with 34...Nc6 which was the final blunder of the game and there was no way to get back after that.

In the post-game press conference, Goryachkina said she was relieved and happy to be back in the match. Ju agreed that while today's result was disappointing, it was a logical conclusion and the overall score reflected the match thus far. 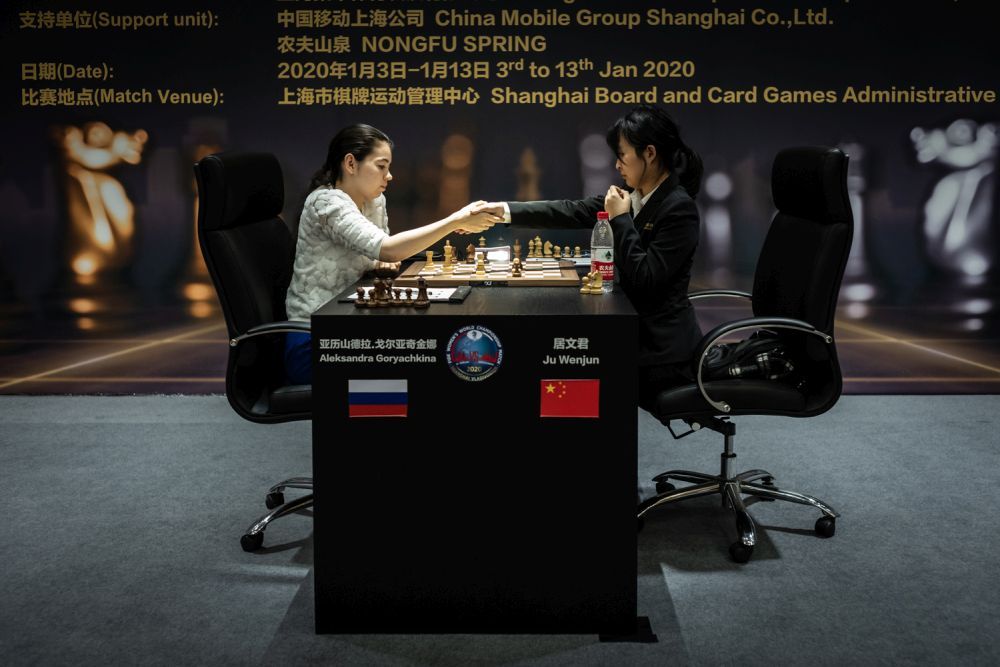 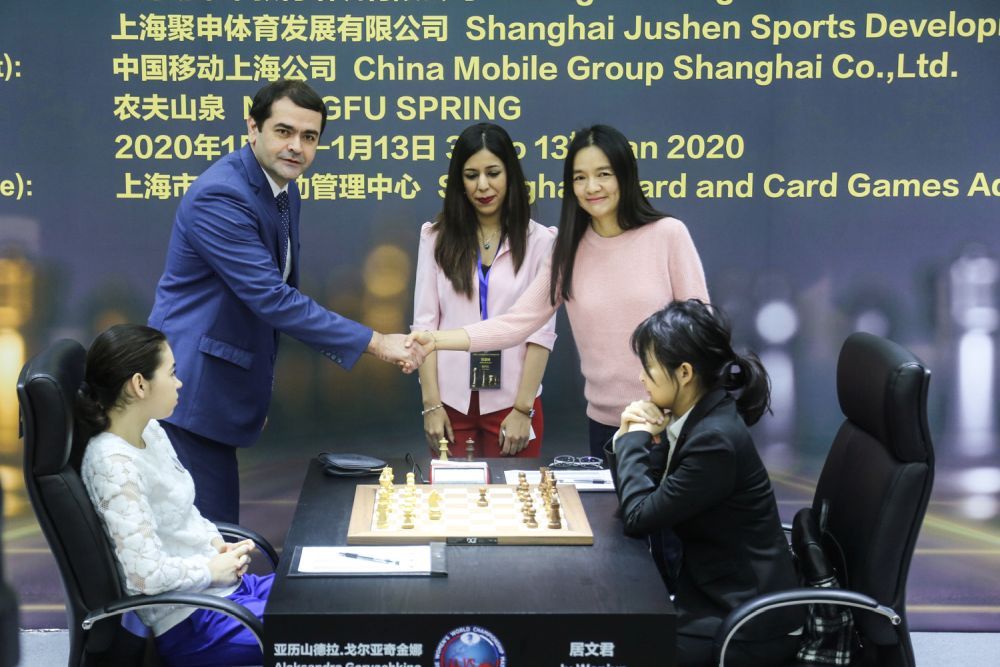 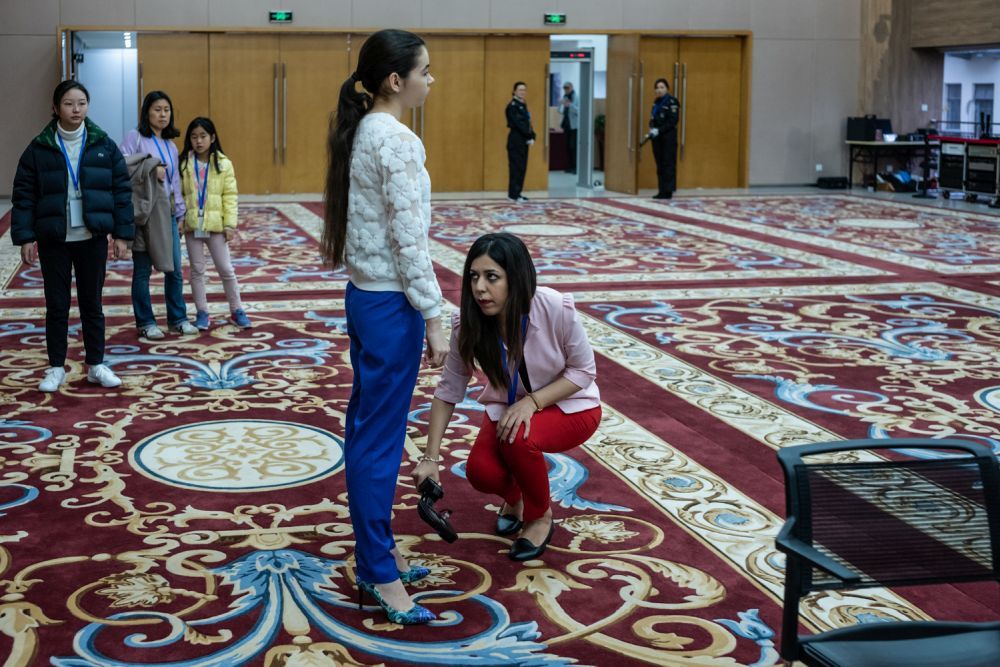 The games are slated to start at 15:30 local time, which is 1 p.m. IST. When the match moves to Vladivostok, games will start at 8 p.m. IST. The time control is 90 minutes for the first 40 moves, followed by 30 minutes for the rest of the game plus 30 seconds per move, starting from with move one. Agreed draws before move 40 are not allowed.

The next six games will be played in Vladivostok, Russia | Photo: Official site