The Controversy in Bengal Chess

Bengal Chess is witnessing a controversy where the state's first grandmaster Dibyendu Barua has levied some serious allegations against the Bengal Chess Secretary Atanu Lahiri. These allegations include not giving permission for the organization of chess events, banning players from participating in tournaments, banning top GMs of the state - Surya Ganguly and Deep Sengupta from attending ceremonies organized by Bengal Chess, no elections held, and misappropriation of funds. AICF has condemned the actions of Atanu Lahiri and has issued a press release. In this article we acquaint you with the current situation of this controversy in Bengal Chess. 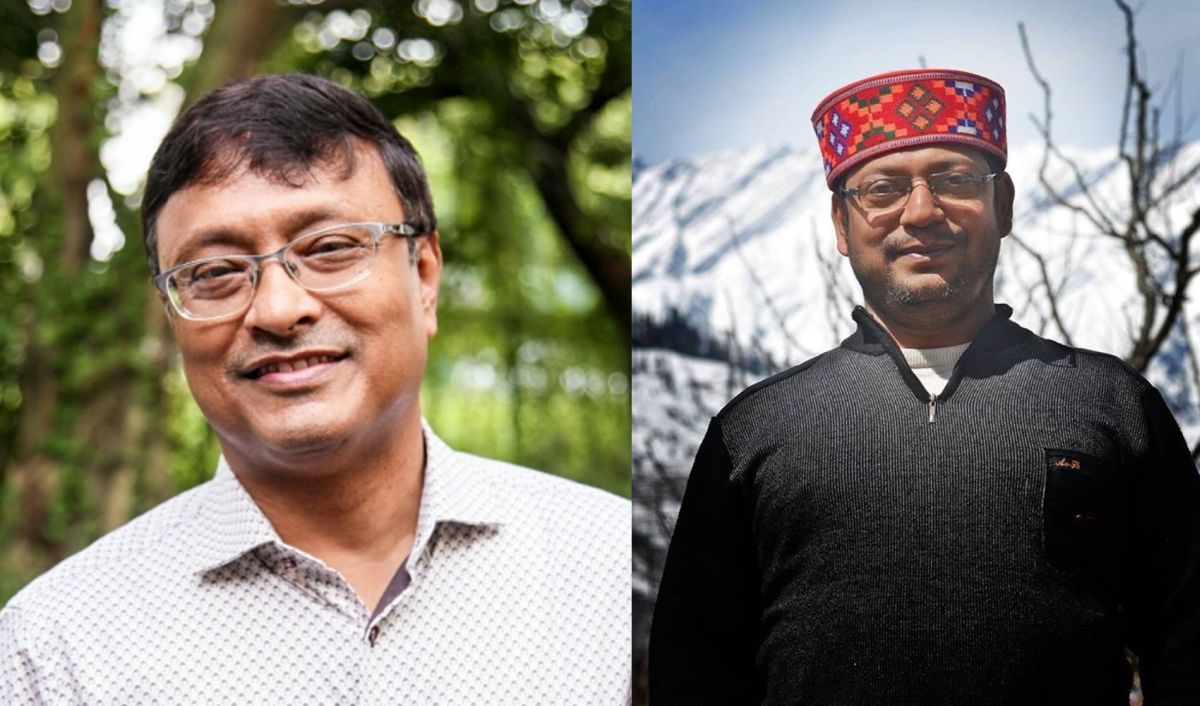 West Bengal Chess is witnessing a controversy where the state's first grandmaster Dibyendu Barua has levied charges against the Bengal Chess Association Secretary IM Atanu Lahiri. Here are the points mentioned in the press release by Dibyendu Barua.

1. Chess for Youth, an annual event conducted by Dibyendu Barua, was scheduled to be held on 2nd and 3rd of November 2019. On 25th of July, Barua had received an event code from AICF and had gone ahead with the bookings of the venue. The tournament had been listed on the AICF website as well. On 30th of July, Atanu Lahiri wrote a mail to AICF asking for the tournament to be removed from the AICF calendar.

2. According to Barua, two players veteran Dilip Das and nine-year-old Sneha Halder have been stopped by Atanu Lahiri to participate in tournaments taking place in Bengal.

3. The committee members of Bengal State have been verbally instructed that the state's top grandmasters Surya Sekhar Ganguly and Deep Sengupta should not be invited to any of their official tournaments. According to Barua, it was because the GMs had expressed their discontent on the organization of National Team Championships in a video interview published on ChessBase India.

4. Atanu Lahiri has not called for an election of the Bengal Chess Association, although the tenure of the committee has come to an end in 2018.

5. According to Barua, Atanu Lahiri is appointed as a consultant of Tribal Development Department by West Bengal Government to run the projects of chess development in tribal regions. For this he receives a consultation amount of Rs.25,000. Atanu Lahiri has recommended his own company Global Chess Foundation to receive the grant, which leads to a conflict of interest. The summary of transactions between March 2018 to March 2019 of Global Chess Foundation have been provided in the link below. Barua mentions in the press release that this money from the Government should go to the Bengal Chess Association and not to a private body. 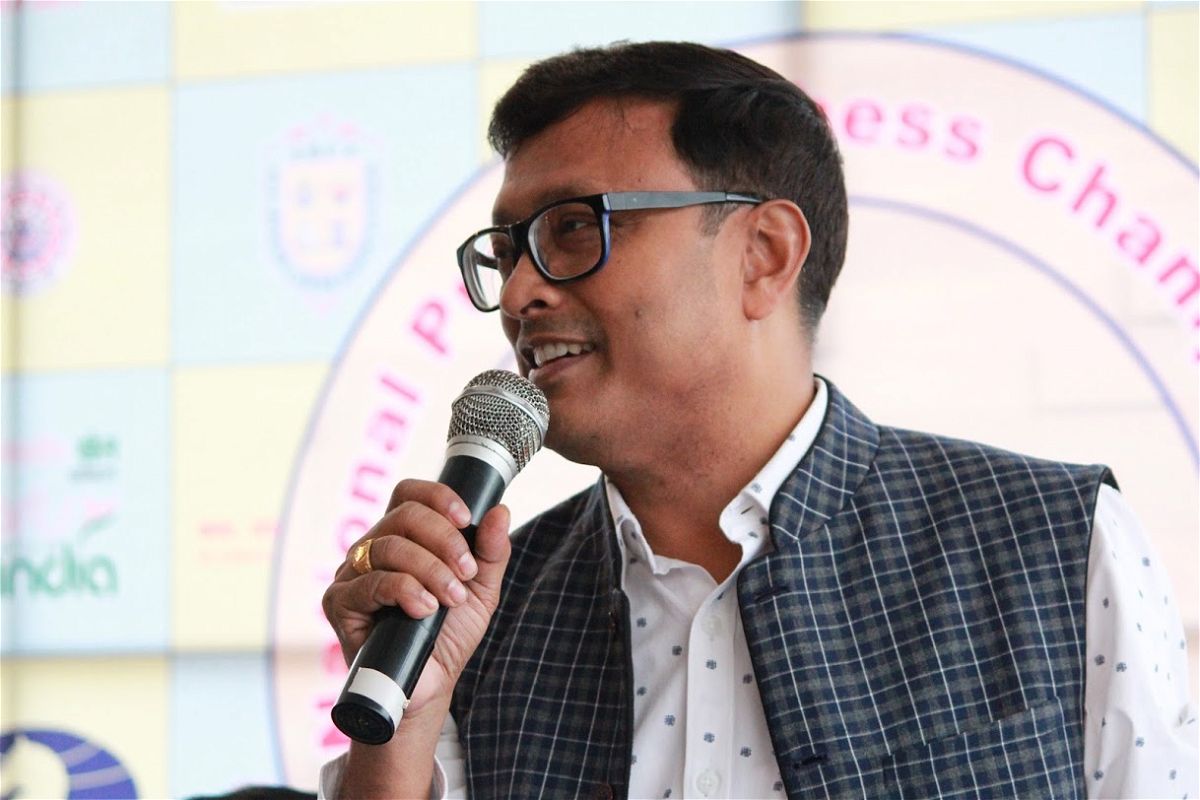 ChessBase India reached out to Atanu Lahiri for his side of the story. He wrote to us saying, "I am in Weifang China currently as the Head of Indian Delegation for the WCCC. All I can say now is the timing of attack is good politically but poor ethically and morally because I am not in a position to answer and discharging my duties for India. All the allegations will be addressed by me with proofs when I return." 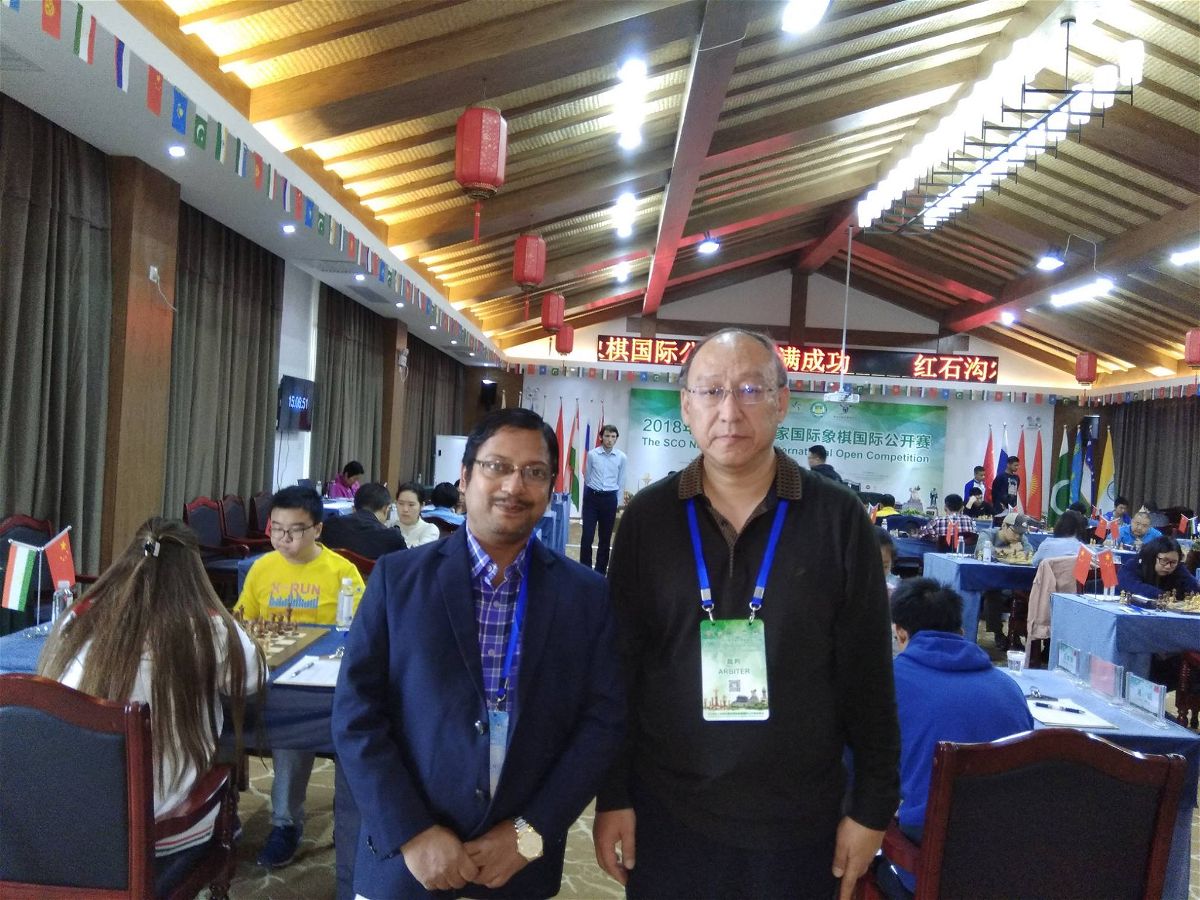 The All India Chess has condemned the actions of the Bengal Chess Association's Secretary Atanu Lahiri. As per the press release (given below) AICF will initiate a thorough inquiry into the affairs and a committee will be setup to look into the matter. 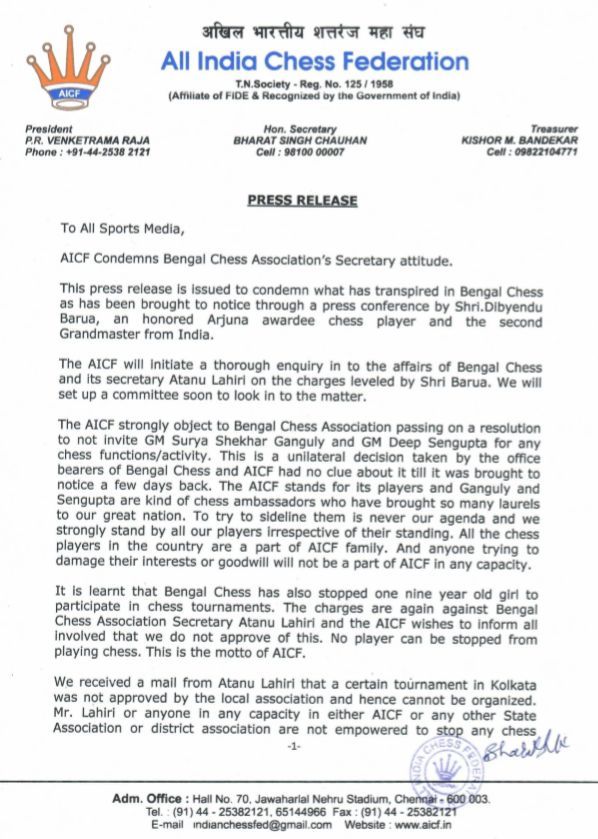 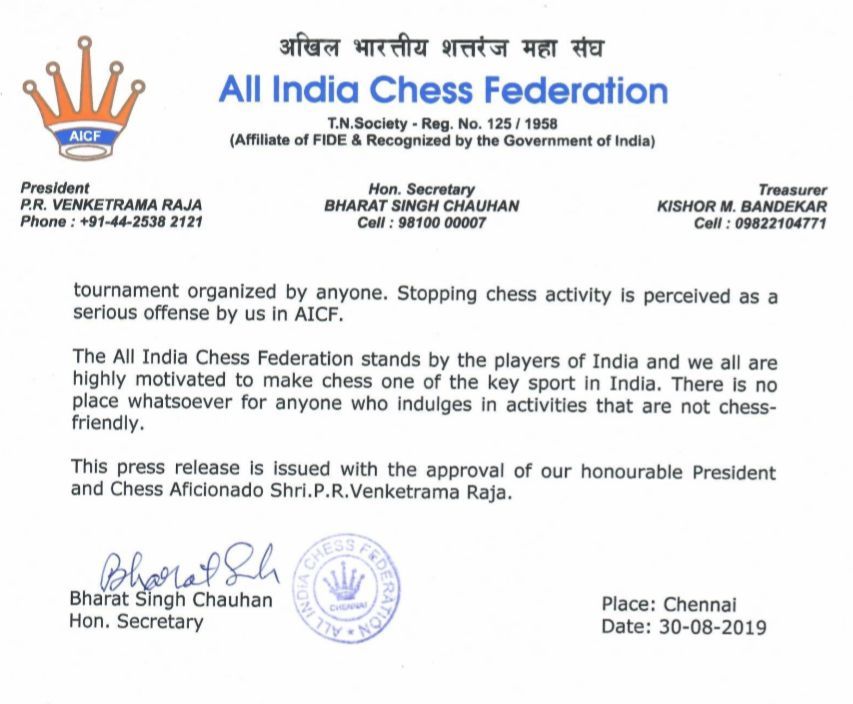 On 28th of February 2020, a letter was sent by Venketrama Raja to Bharat Singh
Election for West Bengal Chess Association office bearers took place on 15th of March 2020 and Atanu Lahiri's brother Santanu Lahiri beat Dibyendu Barua with a score of 14-9 votes. 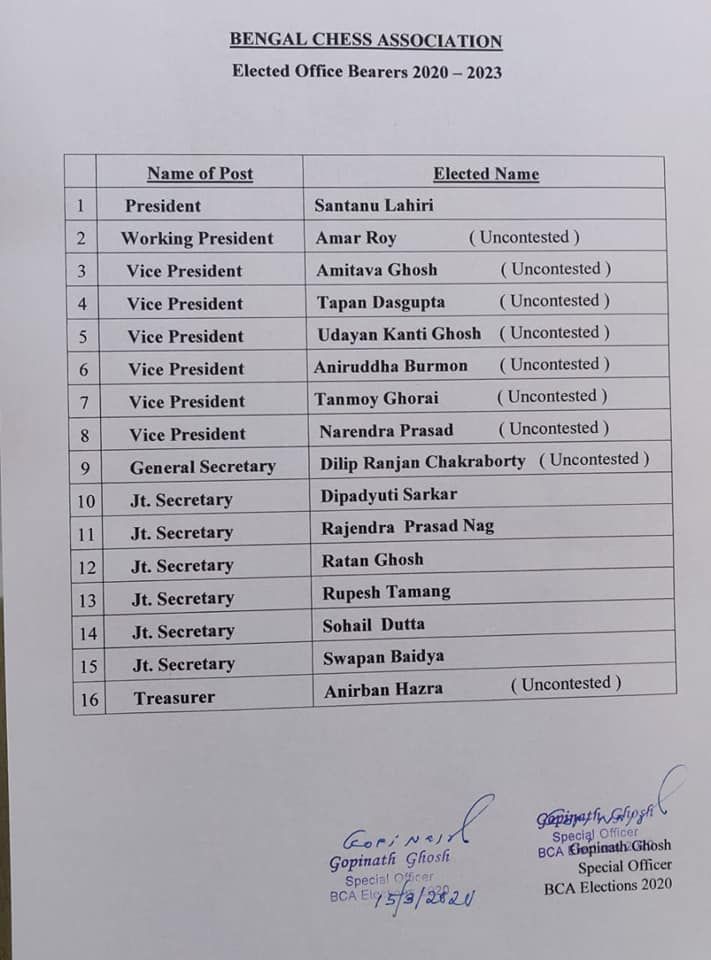 Mail from AICF to Dibyendu Barua

Coverage in other media