One of the most important things that we like to do at ChessBase is to involve our viewers/readers. That's the reason why we have regular contests where we have attractive prizes. Three contests were held recently and we are revealing the winners of them in this article. ChessBase India YouTube Channel hit 200,000 subscribers and we had the "Why do you Love ChessBase India Youtube channel contest". Best three answers get the ChessBase India t-shirt. On the Children's day we had a contest to guess all the titled players in a photo. ChessBase India Elite pass was the prize of that contest. And finally the Tata Steel Chess India contest where the best answer for why did you enjoy Tata Steel Chess India won a ChessBase 15 DVD signed by 8 participants of the event! Check out the article where we have picked out the winners, after careful consideration.

200,000 Subscriber Special (Why do you love ChessBase India): 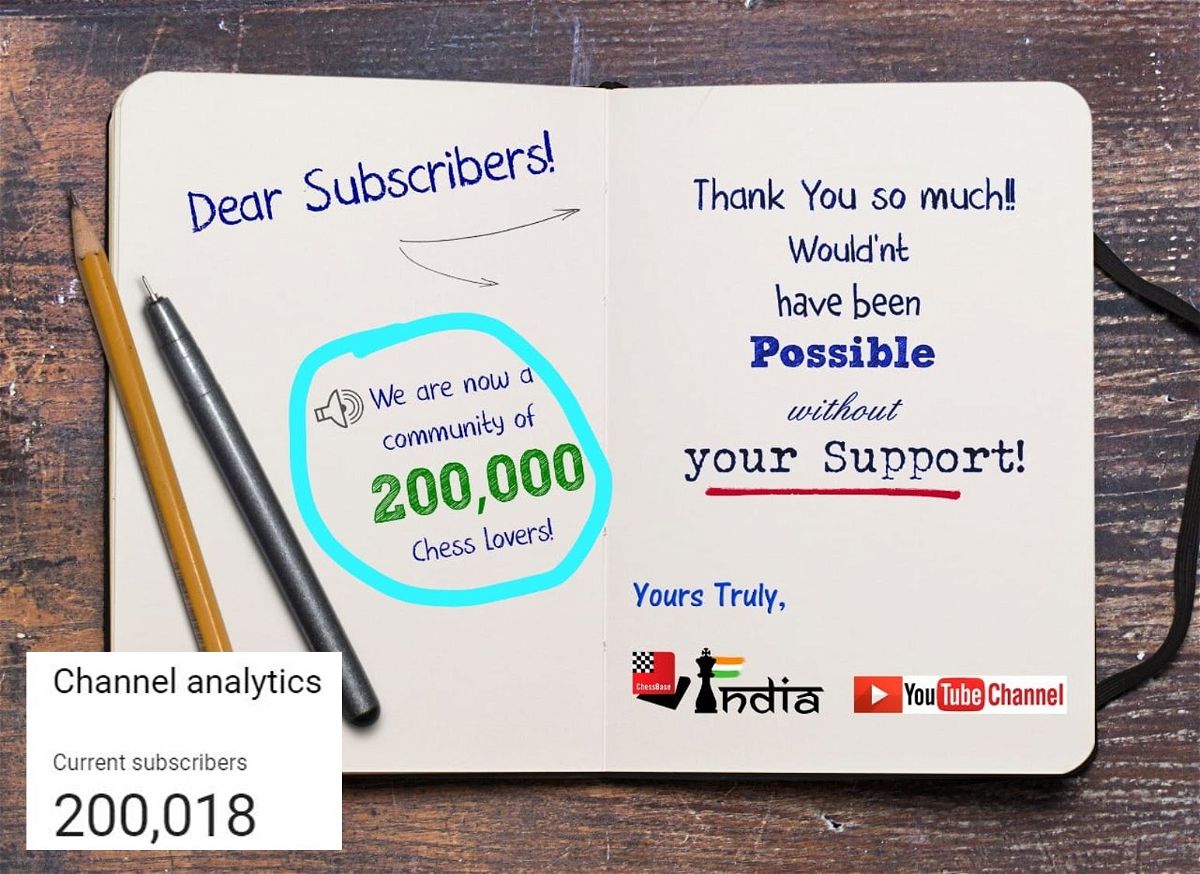 We hit 200,000 subscribers a couple of months ago on the ChessBase India YouTube channel. We asked our readers - "Why do you Love ChessBase India?" The best three answers were to receive a ChessBase India t-shirt. We received several answers, and many of them were excellently written ones! We had to limit them to three in order to choose the winners. Here are the winners:

I am 13 years old and and following Chessbase India for nearly 2 years. I love your channel a lot as it is helping me to improve my game since I was a beginner. Your game analysis with great players, along with their experiences and interviews helped me learn a lot. It also helped me create and play my own opening repertoire, your English Opening part 1 and 2 is also helping me. Hope you make more such great videos in future. All my best wishes.

I have been following many chess channels in YouTube from across the world. If I say Chess base India is the best among them all, it would be a little exaggerating, but its definitely one of the best and the question here is why I love the Chess base India YouTube channel, Honestly speaking I love chess and I really wish my country to be the best in this game. I see the same passion and intent in this channel. Always feel so proud whenever an Indian player put up great performances and the effect is much higher when I watch it through this channel. The world cup coverage was a great example of this passionate approach. Kudos to all the team members. Keep going.

I love chessbase india because I can see games analysis, interviews of some professional players and higher rated players, also I have learnt opening traps,endgame techniques like bishop knight mate. Sagar sir explained the English opening and now I play it. I play Caro kann which I learnt from a video of chessbase. My interest in chess has now increased a lot and I never miss even a single video . It is the best chess channel for all chess related things. I was unrated earlier but now I have a rating of 1153 . All because of this channel Thank you a lot.....Chessbase India team.

Gargidc, Felix Sunny and Hema Dodal, please write to us at chessbaseindia@gmail.com to claim your prize.

Children's Day Contest Winner (Guess all the titled players in the photo):

In our article on 14th of November 2019, the Children's Day, Avathanshu Bhat put up a nice trivia. The below picture was taken at the World Youth Championships 2014. You have to guess the number of titled players (GM,WGM, IM, WIM) in the photo: 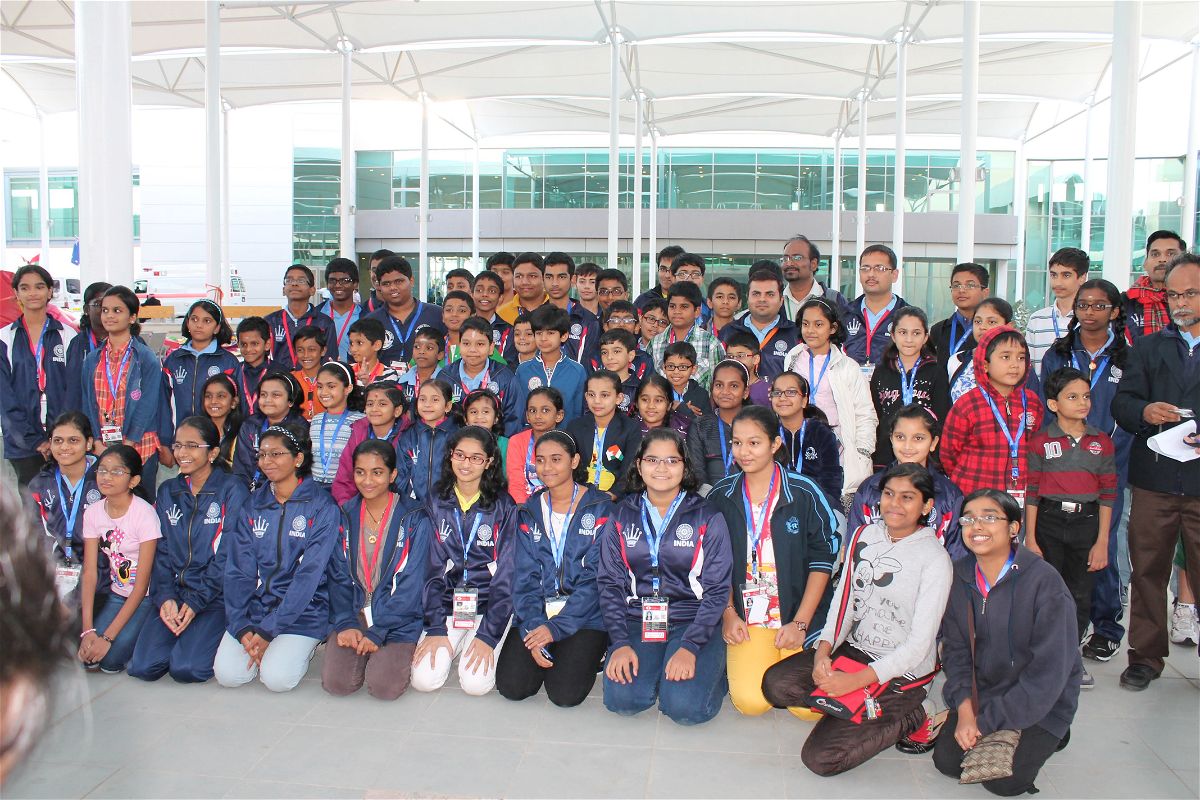 So many of these youngsters have gone onto make India proud on so many occasions! What an amazing photo.

So how many titled players did you find? Here are the answers:

There were two people who guessed all the 25 names correctly - Isha Sharma and Viskah NR!

Although we had promised only one winner, we would like to offer the prize to both of them! Congratulations Isha and Visakh for winning the ChessBase India Elite Pass. Please write to us at cbielitepass@gmail.com to claim your prize. 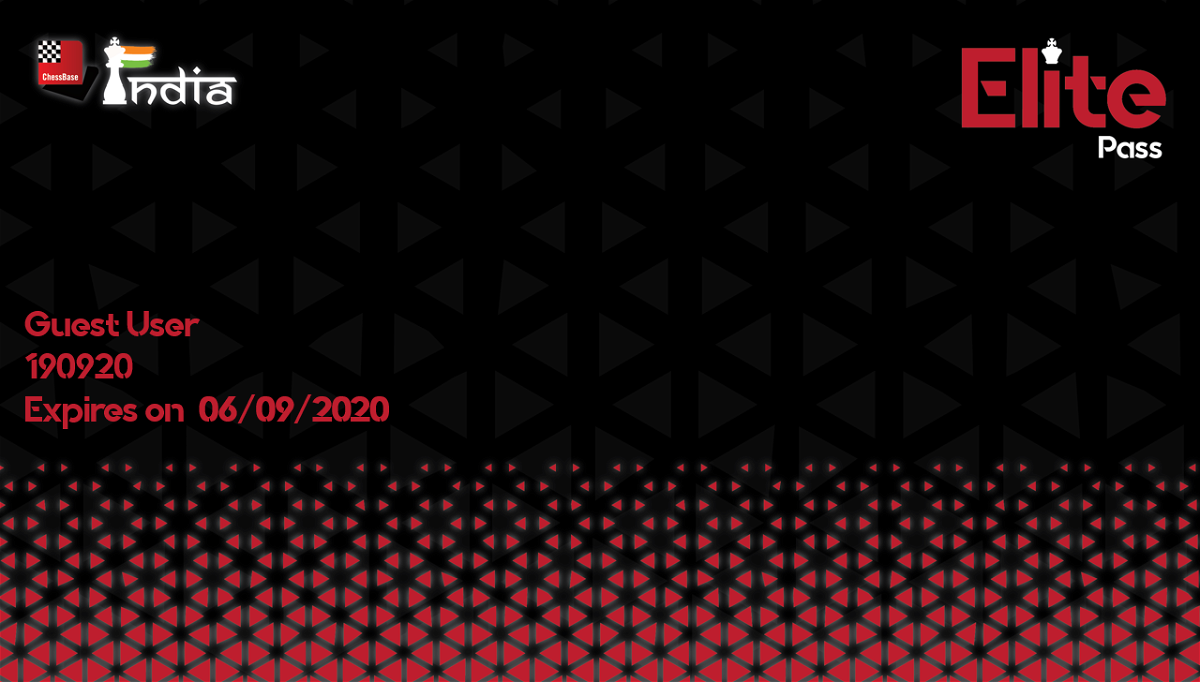 What's the ChessBase India Elite Pass?  Here's all that you need to know about this program

In our previous article on Tata Steel Chess India 2019 we had announced a ChessBase India giveaway. The contest was "Write down in the comments section below as to why you enjoyed the Tata Steel Chess 2019. The most interesting and creative answer will win the ChessBase 15 DVD signed by eight participants of the event!" 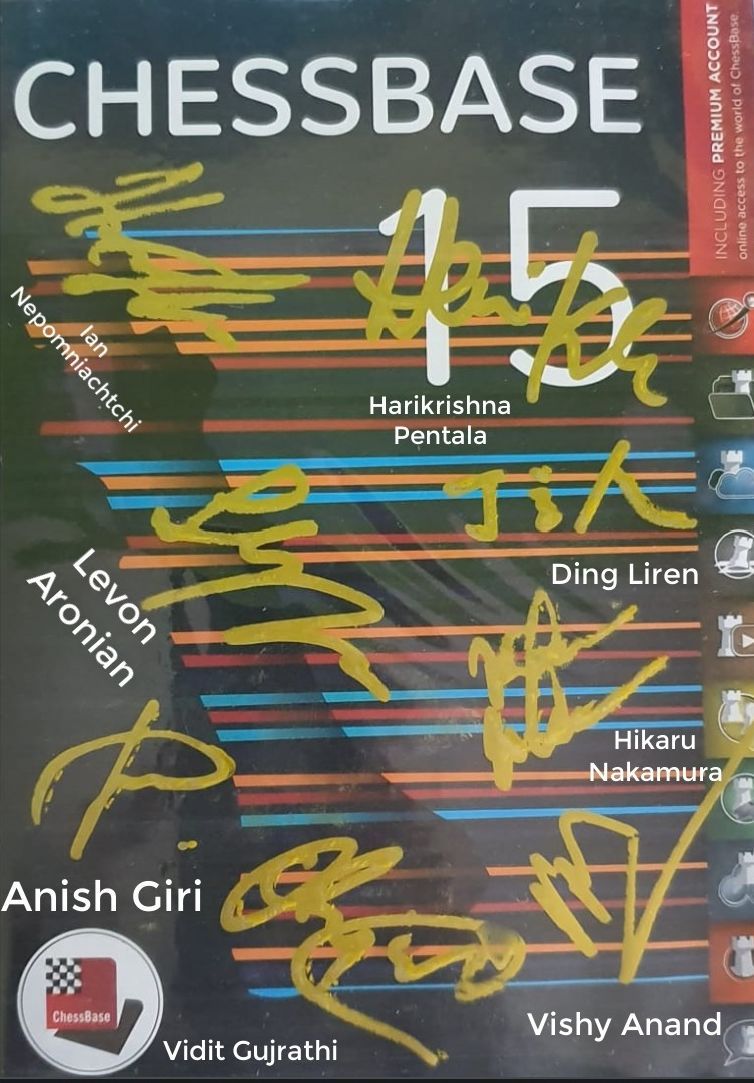 This is the prize!

The winner of the contest is Srivathsan D. This is what he wrote:

Well there are many reasons why I liked this Tata Steel tournament:

1) Though the quality of games were inarguably top-notch considering the fact that it's Rapid+Blitz, there were many amusing moments which showed us yet another time that these super GMs are humans and could crack under pressure as well!

- Magnus draws the game against Vidit in <5 moves and shocks everyone. People started to worry that Magnus gonna do it through out the day; only to find later that Magnus was actually not feeling well. Funny thing was when Anish commented that he wanted to beat the record of Vidit and draw the game in <4 moves against Carlsen. (Alas ! His draw offer got rejected. )

2) Continuous updates and interviews by Tania Sachdeva with the players provided an insight as to what was actually going inside the player's mind. It was amusing to find that, though the players were great rivals across the chess board, the off-board environment was friendly and funny.

3) Vishy Anand quiz, particularly the one with Monster Magnus was mind-blowing to watch. This guy could even remember the year of the tournament (leave alone the the actual move, opponent details etc.). It was funny when the troll master Anish Giri started his comments with "It's embarrassing" when Magnus couldn't remember the key to Anand-Beliavsky game (Ndxe6).

4) Other funny moments of Anish Giri :

- When he became the brand ambassador for Vedika Gujarathi's chocolates and admitted his motive was to get more chocolates in return xD.

- Disturbing and pressuring Vidit when he is trying to ace the Vishy quiz (the same Beliavsky game).

- Sees a person randomly in Gym only to find out later that it was Virat Kohli.

5) Amazing live commentary by Saint Louis team. Frequent and interesting updates from Chessbase India team (special mention-the video covering the tournament venue). Last but not the least, Fantastic Audience ! - There were many situations when they wanted to clap as soon as Vishy concluded his game with a win, but they restrained themselves most of the times since the other players were still playing!

Srivathsan, write to us at chessbaseindia@gmail.com with your residential address and we will courier the DVD to you.

Congratulations to all the winners and a big thank you to all that participated.