Koneru Humpy and Ju Wenjun continue to lead the ongoing Cairns Cup 2020 after seven rounds with 4.5/7 points each. There are three players - Alexandra Kosteniuk, Mariya Muzychuk, and Nana Dzagnidze - following them closely just half a point behind. The seventh round of the event saw only one decisive game but was full of intense action and marathon battles. In this illustrated article we bring you three instructive endgame lessons from the three most important encounters of the day. Apart from that we also have full game analyses, photos, the latest pairings, and more.

Endgames, even the ones that look dry and near dead, can often be deceptively tricky. Only yesterday we looked into how Koneru Humpy pulled off an impossible squeeze from what seemed like an absolutely barren position she had against former World Champion Alexandra Kosteniuk, and today once again from the same event, we have three more instances of similar twists transpiring in the last phase of the game. With only one encounter ending decisively, the seventh round of Cairns Cup 2020 looks pretty uneventful on the surface. But it would be a real shame if we go just by the results and not see into those draws that featured some of the most intense marathon battles of the tournament thus far. 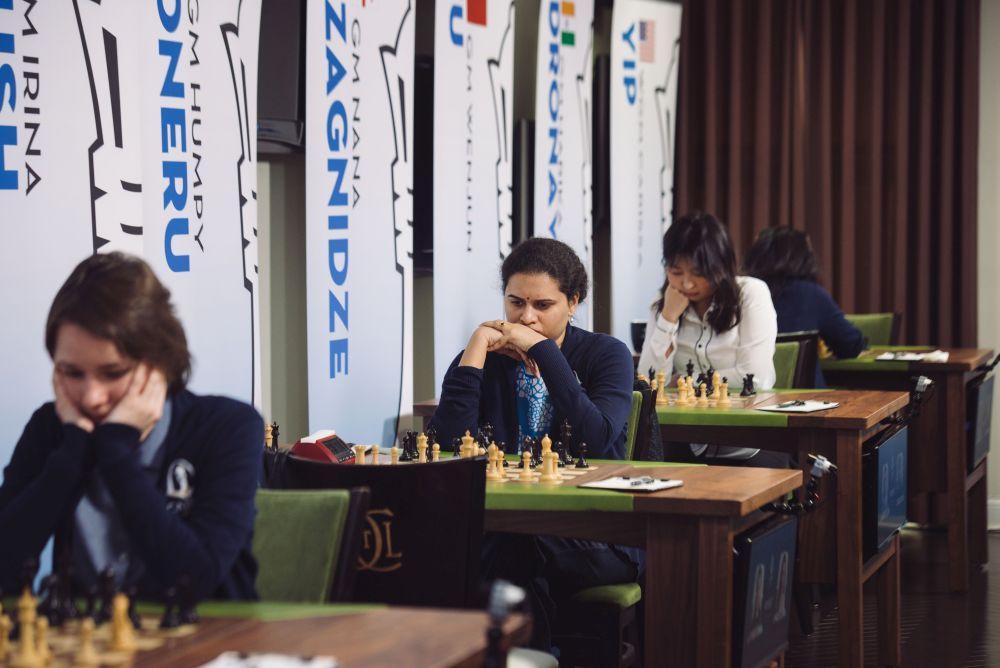 Four out of the five encounters in round seven of Cairns Cup 2020 ended in draws but some of these draws were anything but peaceful and even the one encounter - Valentina Gunina versus Mariya Muzychuk - that yielded decisive result was nothing short of a tragicomedy. Let's go through them now one by one! (Photo: St.Louis Chess Club)

Irina Krush 1/2 - 1/2 Koneru Humpy: The endgame is an exercise in patience.

This was a high-class positional slugfest where the India no.1 employed a novelty as early as move 12 in the classical Nimzo-Indian defense. In response Irina displayed excellent preparedness. Even though she allowed the exchange of queens early on, she managed to cripple her opponent's kingside pawns effectively and achieve a static edge. Koneru made one passive move in the ensuing endgame and things started to go downhill for her thereafter. She was being tied up by the seven-time US Champion as Yasser Seirawan stated during the live commentary but the Indian calmly waited for her chance and as soon as she got one freed herself up!

Humpy is showing tremendous resilience in all of her games lately and she is deservingly leading the Cairns Cup now after seven rounds along with Ju Wenjun | Photo: St.Louis Chess Club 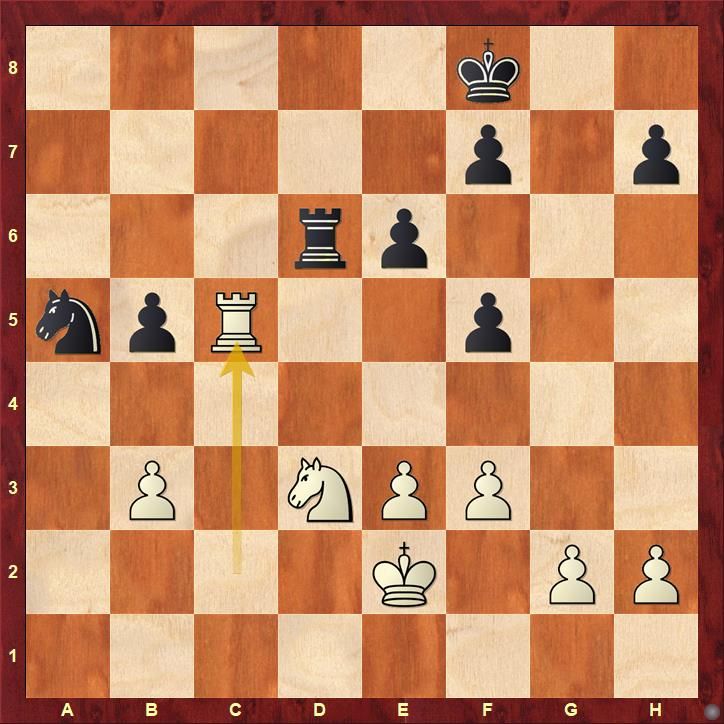 Activity is paramount in rook endgames. What would you play as Black here?

This was a critical moment in the game, Humpy played 30...Rb6 which is an inaccuracy. The correct move is 30...Nxb3! but why didn't the Indian go for it? Well, the reason perhaps is after 31.Rxb5 Black has to go 31...Na1 which looks very unpleasant optically. But let us take a moment to analyse this position a little more deeply. 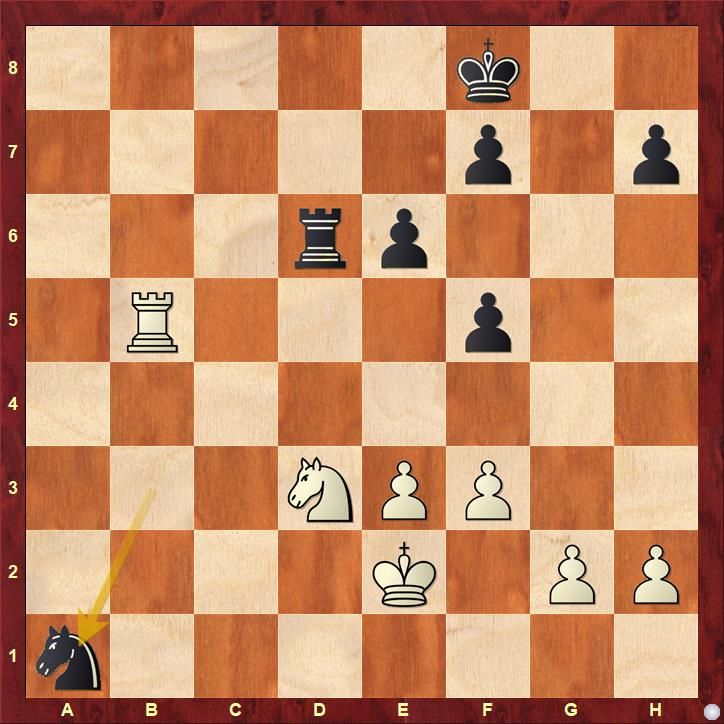 Black's knight on a1 is certainly very passive. After 32.Ne5 you just don't have the time to get it out with 32...Nc2 because White has the powerful 33.Rb7 taking full control of the seventh rank and hitting the f7 pawn. This must have been the point that put Koneru off during the game but actually Black is doing fine here and the trick once again lies in counterplay. The best move is the surprising 32...Ra6! that leads to the following very interesting sequence to perfect equality: 33.Rb7 Ra2+ 34.Kf1 Nc2 35.Rxf7+ Kg8 36.Kf2 Nb4+ 37.Kg3 Nd3 38.Rxf5 exf5 39.Nxd3. The way White gives up an exchange for two pawns in the above line is very instructive and goes on to show how unexpected possibilities might lie dormant in even the most mundane positions. 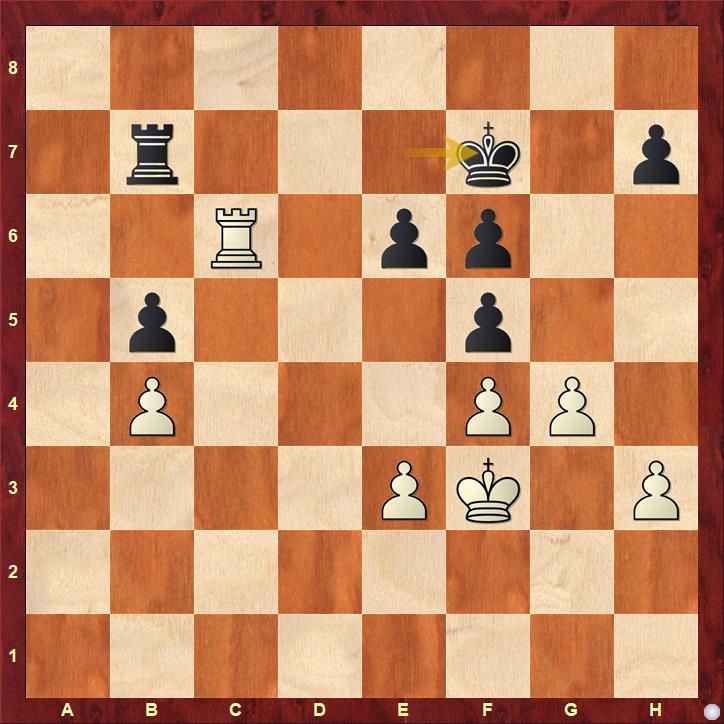 In the game 30...Rb6?! allowed the American to take charge of the game. Black was pushed to passivity and didn't have much options other than moving her king back and forth, while White expanded on the kingside with f4 and g4. But as they say, patience in endgame is really the key, Krush misplayed the above position with 31.g5 - a premature advance. What do you think would have been a better move? 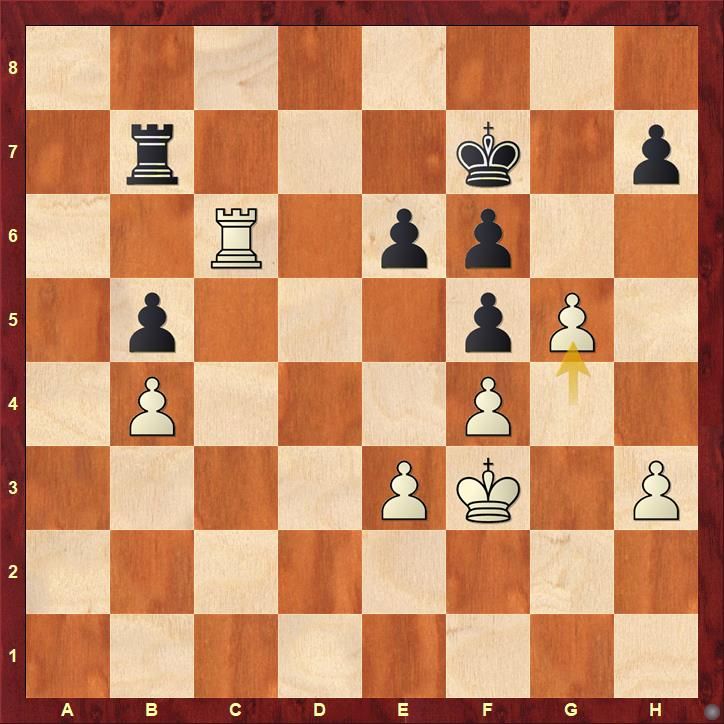 Just a move ago all of Black's pieces were nicely tied down but g4-g5 changes all of that can you see how?

Nana Dzagnidze subjected Ju Wenjun to the Trompowsky attack with the white pieces in this rather curious encounter where the World Champion mysteriously retreated her queen after about half an hour of thought on move nine. Things went the Georgian Grandmaster's way briefly but soon the Chinese took control and grabbed two extra pawns. It then seemed the latter would win effortlessly but a miracle was just around the corner to redeem Nana.

The Georgian escaped by the skin of her teeth today. It wasn't her luck but tactical alertness that saved her day | Photo: St.Louis Chess Club
Ju missed a golden opportunity today to take the sole lead in the event. Let's see what went wrong for her! | Photo: St. Louis Chess Club 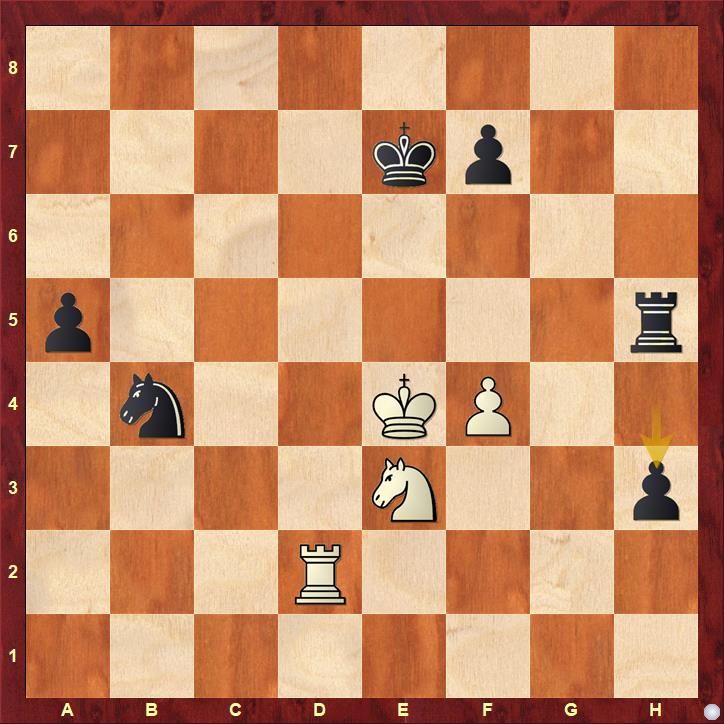 Having a pair of extra pawns is a lot but even then one should watch-out for opponent's resources. In the above position the Chinese unsuspectingly played 67...h3? Can you see what she missed?

Yes, the Georgian lashed out here with the move 68.Nf5+!! and this was not just a mere check! The black king was suddenly in a quandary - where to move? During the live commentary Alejandro Ramirez repeated himself in disbelieve: "Where does the king go? Where does the king go, Yasser? Yasser, where does the king go?" In fact there was really nowhere to go. Moves like 68...Ke8 or 68...Ke6 ran into the nice 69.Ng7+ fork and 68...Kf8 or 68...Kf6 led to mates with 69.Rd8 and 69.Rd6 respectively. Ju thus had to give up her extra material with 68...Rxf5 and the game was drawn immediately. After such a drama would you still say a draw in chess is boring?

Valentina Gunina 0-1 Mariya Muzychuk: The endgame is the moment of truth.

We now come to the round's only decisive game. This was perhaps the most topsy-turvy of all the encounters. Valentina Gunina found herself in an atrociously poor position out of the opening but just when it seemed the demolition was near Mariya Muzychuk stumbled and lost all her initiative. Later the game liquidated into what seemed like drawn ending but the unexpected happened again!

Valentina and Mariya shares a light moment before the start of the round | Photo: St. Louis Chess Club 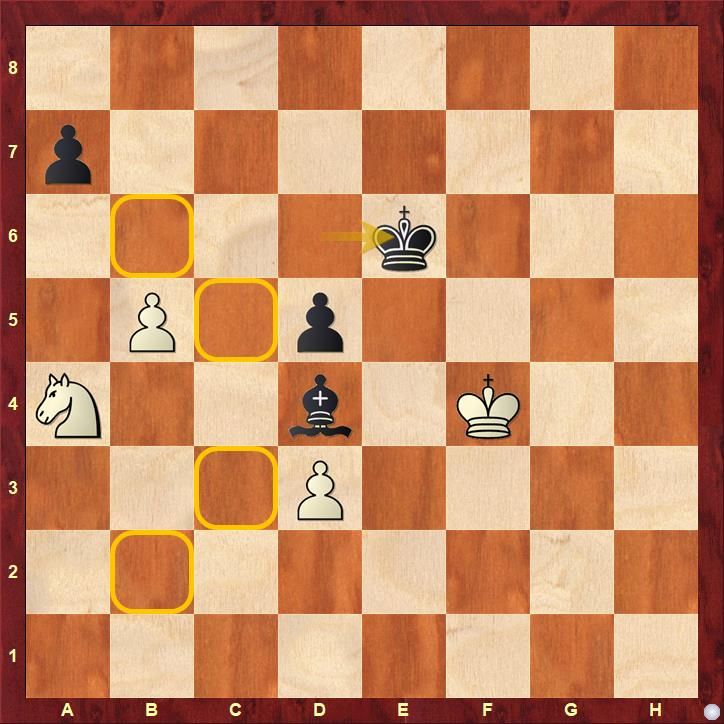 The above was the decisive moment in the game. It is worth mentioning here that Valentina had refused a repetition earlier hoping for more. But she found herself in the above position after 61...Ke6. What would you play as White here? You have to be careful for the knight on a4 is not all that well placed. In the game Gunina went ahead with 62.Kf3 and this innocuous looking move turns out to be a big mistake! 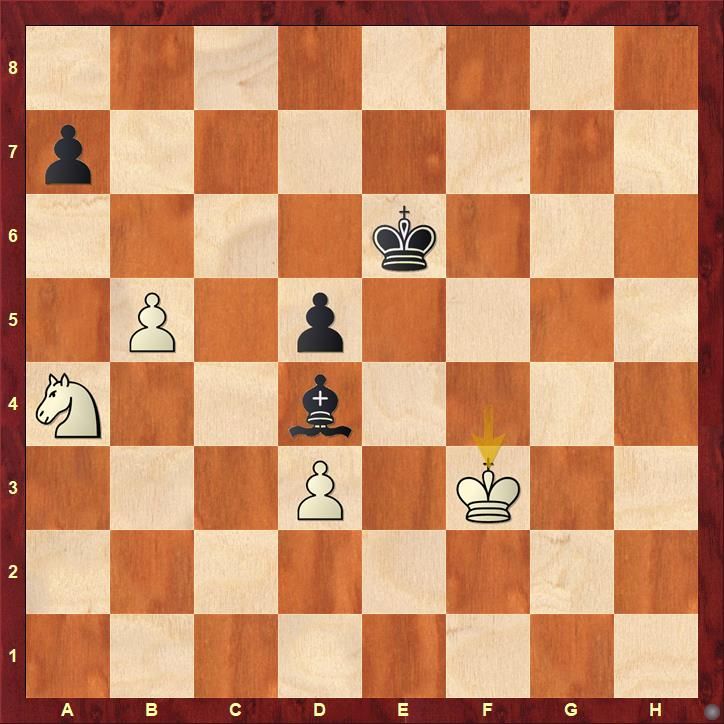 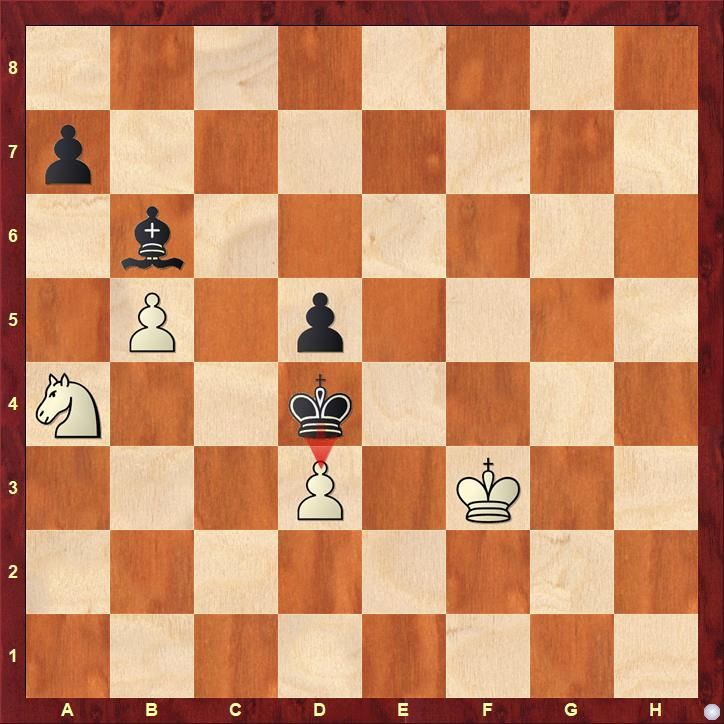 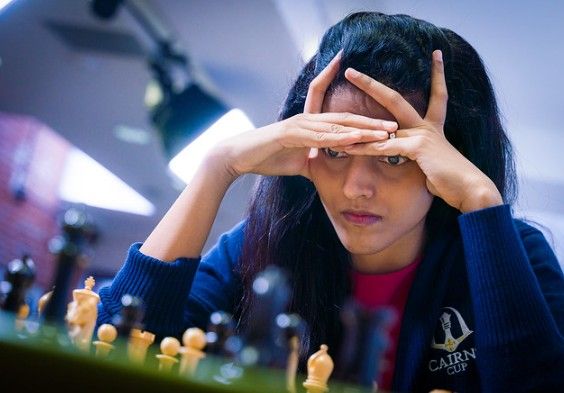 Standing and next round pairings

Humpy and Wenjun are still on the lead but there are three players now in the chasing pack.
The penultimate round will see the lowest seed Carissa Yip up against the top seed Ju Wenjun! Follow it live from 12:30 am IST here.
Related news: