In 2015 Anand came to Zurich after a lacklustre performance at the Grenke Classic. He played a superb tournament but could only go back with the second place after Nakamura beat him in the armageddon game towards the end of the event. In 2016, something similar happened. Just that Grenke was replaced by Gibraltar and armageddon by Sonnerborn Berger tiebreak system. Anand missed out on the first place as Nakamura was ajduged the champion. Nevertheless it was a good event for Anand who summed it up by saying, "Nice to know I play good moves!"

The year was 2015 and Anand had come to the fourth edition of the Zurich Chess Challenge after a disastrous Grenke Classic event. He had lost 15 Elo points at Grenke and was looking to redeem himself with at fine performance at the Zurich Chess Challenge. And that's what he did. He scored 3.5/5 in the Classical time format beating his main rival Hikaru Nakamura, and Levon Aronian. However, it was not enough to lift the trophy as the winner was to decided on the basis of the combined score of classical+rapid format. As it turned out, the combined scores had been tied between Nakamura and Anand and an Armageddon game was played to decide who would be the champion. Anand lost that game and Nakamura became the 2015 Zurich Chess Challenge champion.

Come 2016, and things couldn't have been more similar. First of all just like last year Anand came to Zurich after a horrible performance. Instead of the Grenke, this year it was the Gibraltar Masters where he lost 21 Elo points. The format of the Zurich tournament in 2016 was, however, different - no classical, only rapid with 40 minutes + 10 second increment and a final blitz event. As mentioned in our previous report  Anand was leading the rapid event until the final round when Vishy drew his game against Kramnik, and Nakamura was able to suqeeze out a win against Aronian. 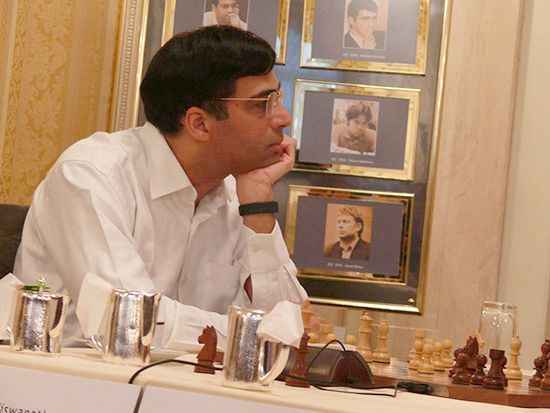 It was now time for another blitz event. We would like to remind our readers that the opening blitz which was won by Nakamura didn't make a difference for the final standings. It was just to determine who got more whites in the tournament.

The rapid event was going to count for double of what the closing blitz would. But this didn't matter much as Anand and Nakamura both had the same score of 7.0/10 in the rapid format. It all came down to the five rounds of four minutes + two seconds increment.

Anand started off with a beautiful win against Levon Aronian. Just for you to understand how good Anand is at blitz here is the position from their game: 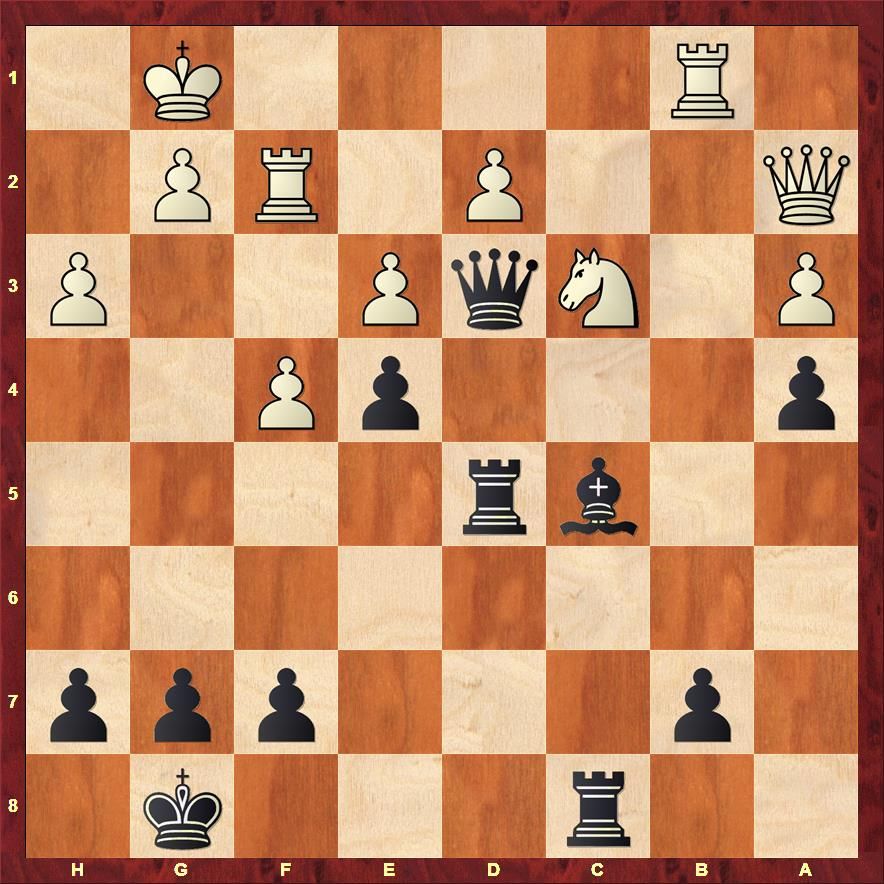 How did Vishy continue?

Vishy continued his fine form and beat Alexei Shirov as well. Here is the game with analysis by GM Alejandro Ramirez:

The key game was the blitz encounter between Anand and Nakamura. The one who would win this game would most probably assure himself of the tournament victory. Anand had a winning position but Hikaru was able to save himself. GM Alejandro Ramirez once again takes you through this game:

Anand was half a point ahead of Nakamura at the start of the last round. He drew his game against Kramnik while the American was able to beat Aronian with the white pieces in the Anti-Berlin. Once again Anand and Nakamura were tied with the same score of 3.5/5. This is how the blitz crosstable looked like. 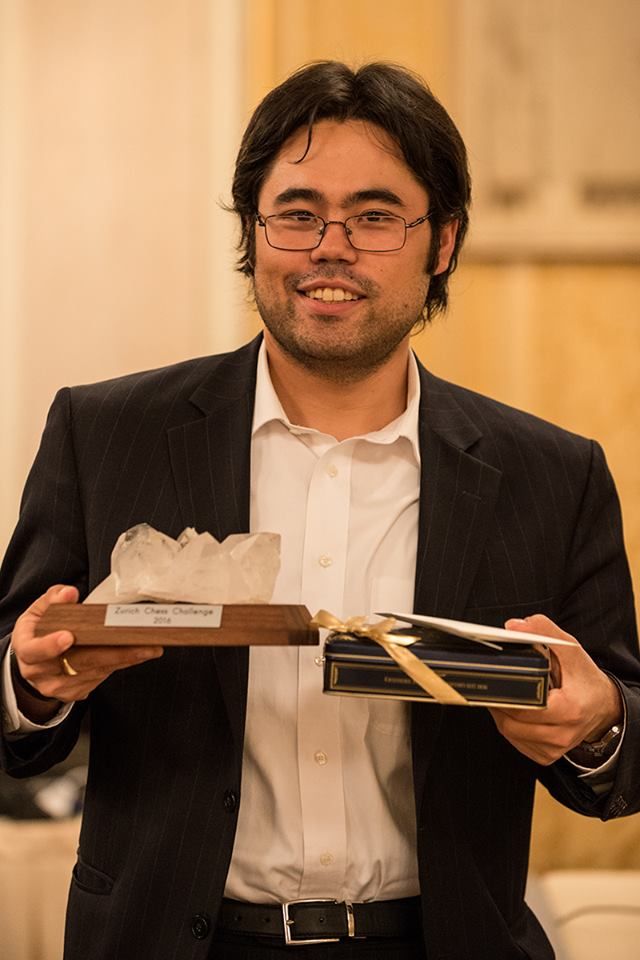 Hikaru Nakamura was adjudged as the winner of the 5th Zurich Chess Challenge (picture by David Llada)
So what exactly happened? Why did Nakamura win the event when both Anand and he had the same rapid and blitz score? Well, it all came down to the Sonneborn-Berger system which was used as the tie break. Sonneborn-Berger score is calculated by adding the sum of the conventional scores of the players he/she has defeated to half the sum of the conventional scores of those he/she has drawn against.
Now Nakamura had beaten Anish Giri in the blitz event while Anand had got the better of Alexei Shirov. As Giri defeated Shirov, it gave Nakamura a clear lead in the SB score. Unfortunately, for Indian fans Anand had to settle for the runner's up position. 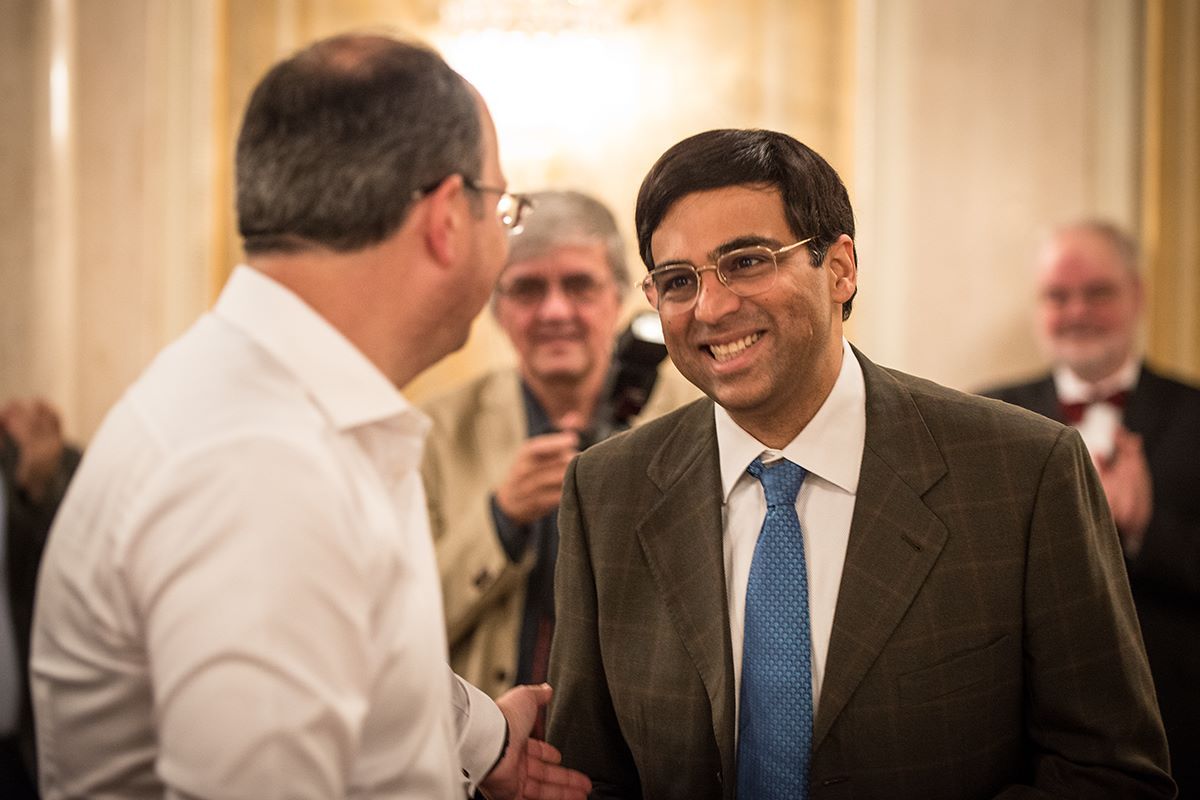 Anand must have been definitely upset that he didn't finish first, but there were a lot of positives to be taken back home (picture by David Llada) 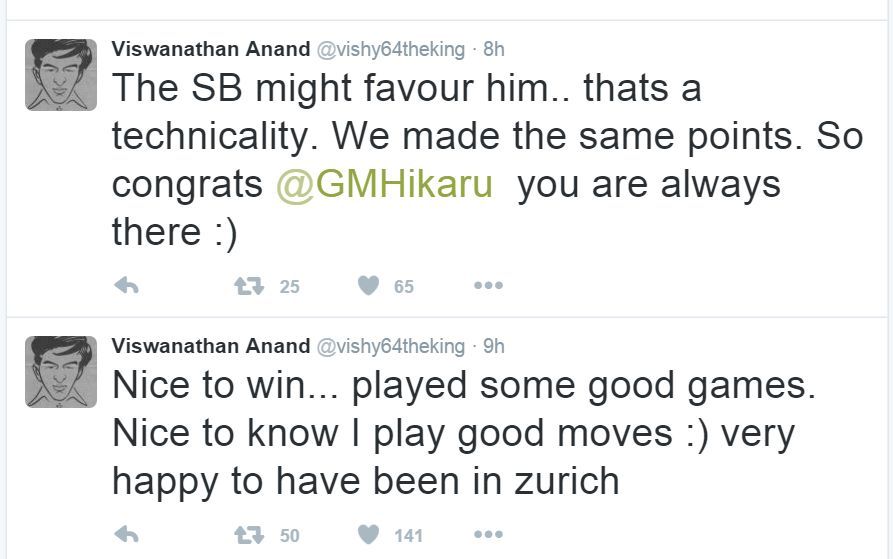 Post tournament tweets by Vishy Anand
The logical question to ask at this point was why wasn't there a final armageddon game just like last year?

With an increasing number of tournaments ending with players on same score (London Chess Classic + Grand Chess Tour, Qatar Masters etc.), it seems like organizers have to put in more effort to create a full proof tiebreak system.
Of course, fans of Anand would be disappointed that their hero didn't finish first, but looking at the positives it seems like a perfect comeback for the Indian ace just before the Candidates 2016 that are due to begin from the 11th of March. As you could understand from the article there was a huge resemblance between 2015 and 2016 for Anand as far as Grenke/Gibraltar and Zurich was concerned. We hope that this deja vu feeling crops up once again and Anand is able to win the Candidates just like he did in 2014! 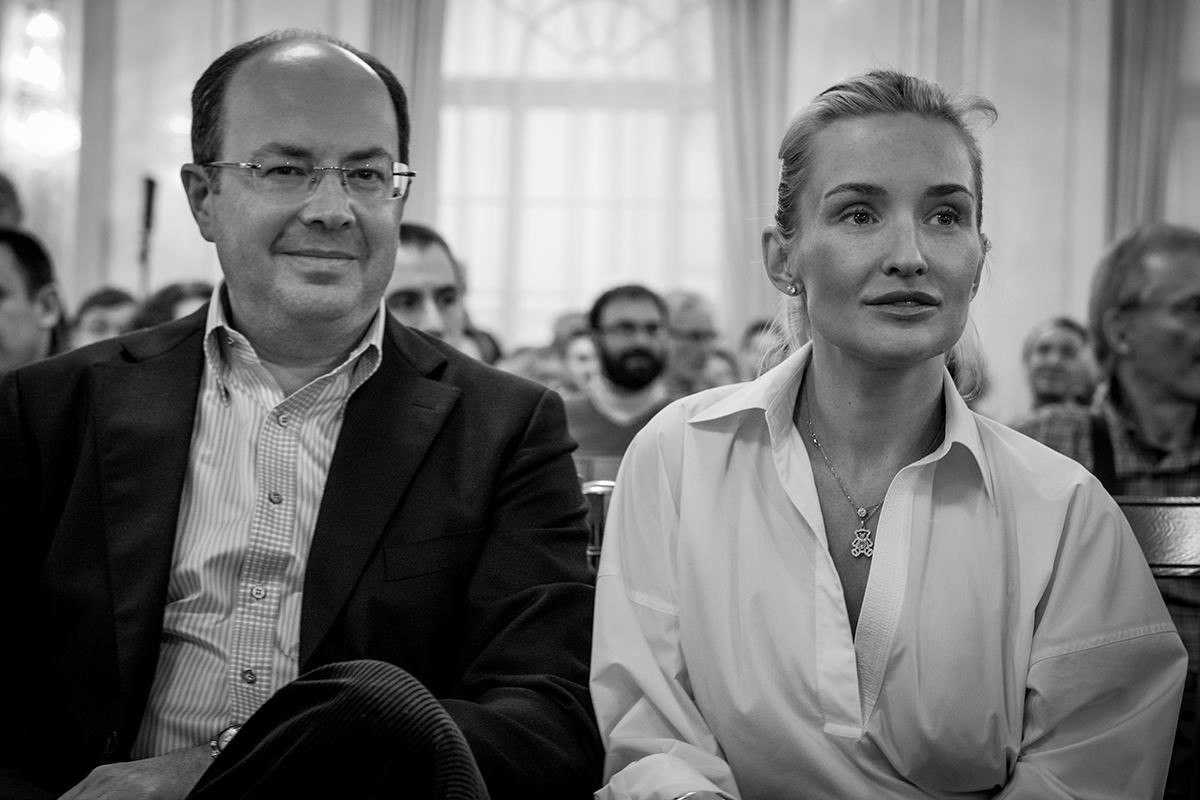 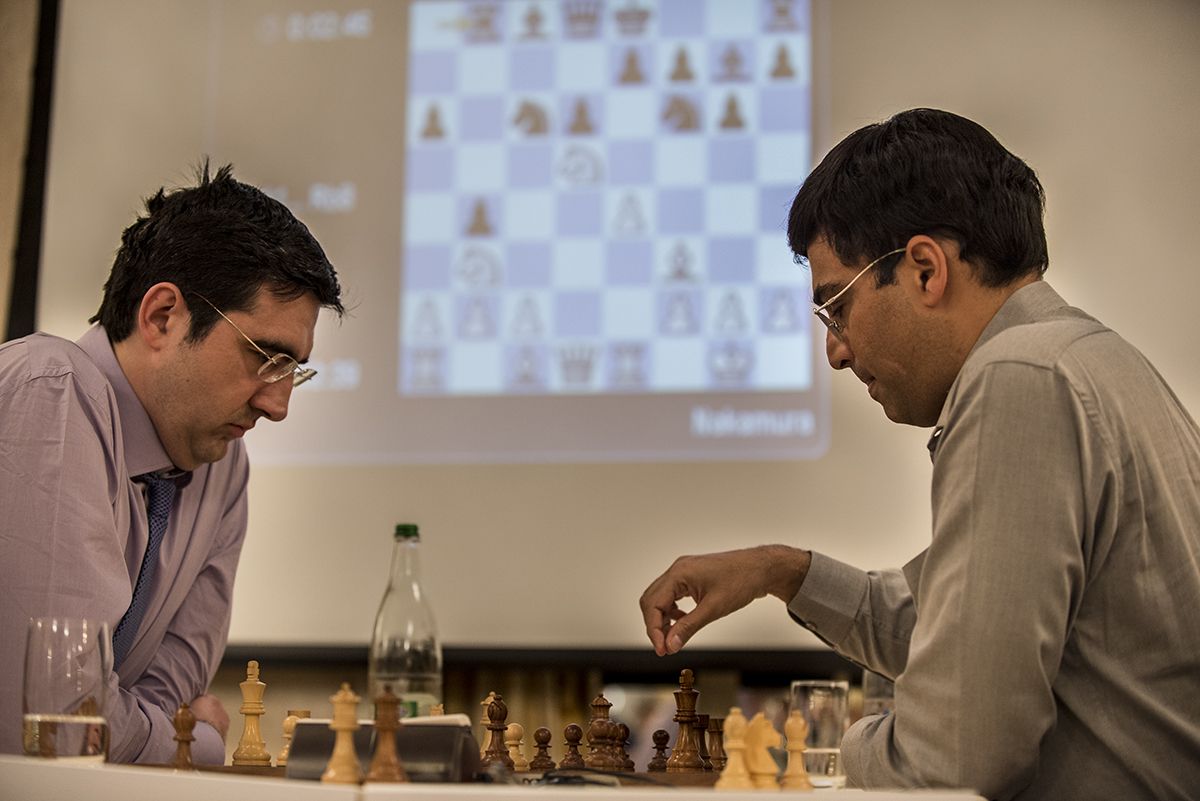 13/02/2016 - Returning from a poor performance at the Gibraltar Masters, all that Anand needed was a boost in confidence before the main event of Zurich Chess Challenge which begins on the 13th of February. The Blitz tournament did exactly that. Anand scored 3.0/5 and essayed convincing victories over Anish Giri and the eventual winner Hikaru Nakamura. He, thus, finished second and will have three whites in the main event which begins from today at 7.30 p.m IST.
Life found on planet Vishy Anand! 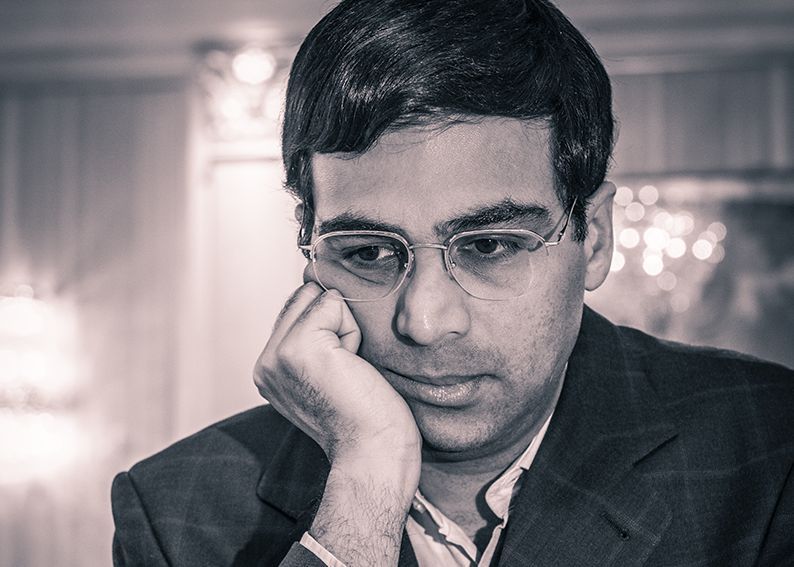 14/02/2016 - While many people had written off Vishy Anand (as usual), the tiger of Madras once again growled back, "not so soon!" Anand played some sublime chess and simply mated both his opponents on the first day of the Zurich Chess Challenge. While Levon Aronian slumped in 20 moves, Anish Giri lasted for 45 moves before he threw in the towel. The games were high class and worth having a look at!
Anand maintains lead in Zurich 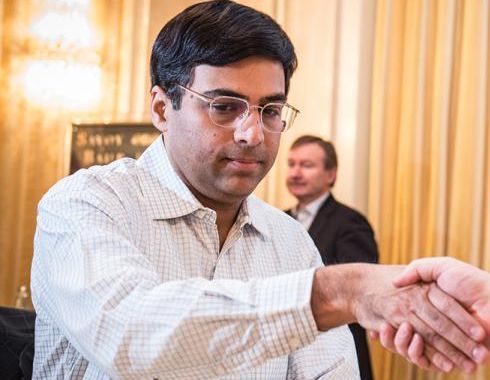 15/02/2016 - After mating Levon Aronian and Anish Giri on day one of the Zurich Rapid, Anand consolidated his lead with two draws against Alexei Shirov and Hikaru Nakamura. He is now on six points and leads one point ahead of Nakamura and Kramnik. The final round will witness Anand taking on Kramnik with the white pieces. It will be a game to look forward to! As of now we have the games from rounds three and four for you.