by Aditya Pai - 23/11/2017
Round nine saw two Indians play on the top two boards of the World Junior Championship. R Praggnanandhaa played on board one against tournament leader, Aryan Tari and GM Murali Karthikeyan was playing Kirill Alekseenko on board two. While Praggnanandhaa was only able to draw after getting a better position out of the opening, Karthikeyan blundered in an equal position and had to resign soon after. Arvind Chithambaram, on the other hand, benefitted from his opponent's blunder and won the game immediately. Round 9 report.

The ninth round of the World Junior Chess Championship gave the GM title aspirant, R Praggnanandhaa the best opportunity he could have hoped for at this point in the tournament. He was paired against the tournament leader, GM Aryan Tari. If he could pull out a win, he will take over the lead from his opponent and do his best to remain at the top; if he lost, he could forget about winning the title. 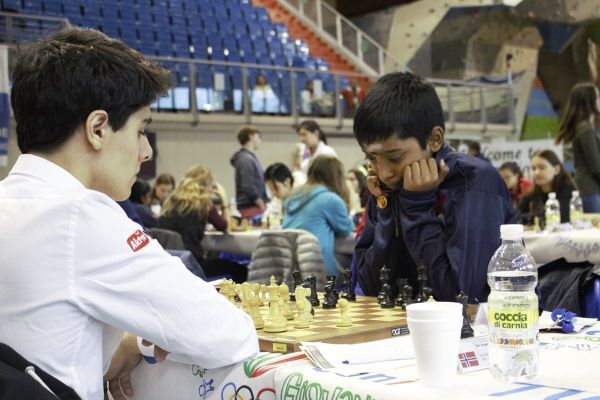 After dominating Awonder Liang in round 8, R Praggnanandhaa got the opportunity the perfect opportunity to take over the lead from the tournament leader, Aryan Tari in round 9 | Photo:  Romualdo Vitale

Tari had come to the board with a little surprise for Praggnanandhaa in the opening. With the black pieces, Praggna has favoured the Archangelsk variation of the Spanish Opening quite a bit at this event. Tari, therefore, came prepared with an enterprising line that involved sacrificing the e4 pawn. Sticking to his guns, Praggnanandhaa took the offered pawn and put the onus on his opponent to prove his compensation. Tari did find some compensation in black's awkwardly placed queen and some weak dark squares in black's camp. But soon, Praggnanandhaa -- after a slight inaccuracy by Tari -- began to consolidate his position.

Just when things were about to look bright for the Indian, he made a positional error which put him back under pressure. An additional problem for both players was the mounting time pressure. With little time left on their clock, the two went for natural-looking moves. Praggnanandhaa then gave up his extra pawn and completely equalize the position. The players signed the truce on move 39. IM Sagar Shah analyzed the game every half-an-hour while it was being broadcasted live. ChessBase India's Hindi author, Niklesh Kumar Jain also provided audio updates in Hindi. Do check them out here in case you missed the live broadcast. 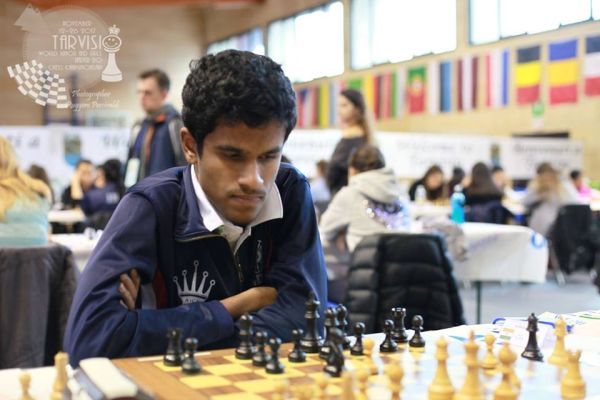 Right beside Praggnanandhaa, on board two, was another Chennai boy, Murali Karthikeyan | Photo: Ruggero Percivaldi

After his win with a stunning rook sacrifice in round 8, GM Murali Karthikeyan went for another rook sac in his round nine game against Kirill Alekseenko. Unfortunately, this time it turned out to be a downright blunder. Play opened with a kind of a hybrid between the Italian Opening and the Ruy Lopez in which Karthikeyan had a balanced position with the black pieces until he saw ghosts and gave up an entire rook. 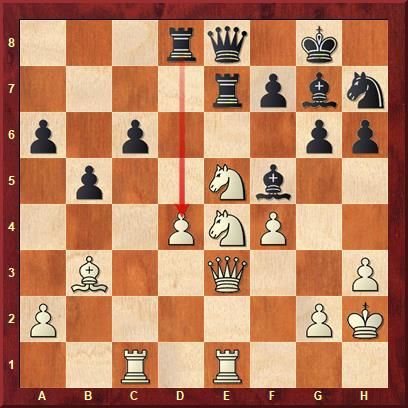 Perhaps, Karthikeyan was expecting to win the queen after 32.fxe5 Bxe5+ but failed to see that after 33.Ng3, he also loses his queen thanks to the pin along the e-file. Alekseenko, however, avoided the line totally with 32.Bxf7+ before taking the rook on e5. 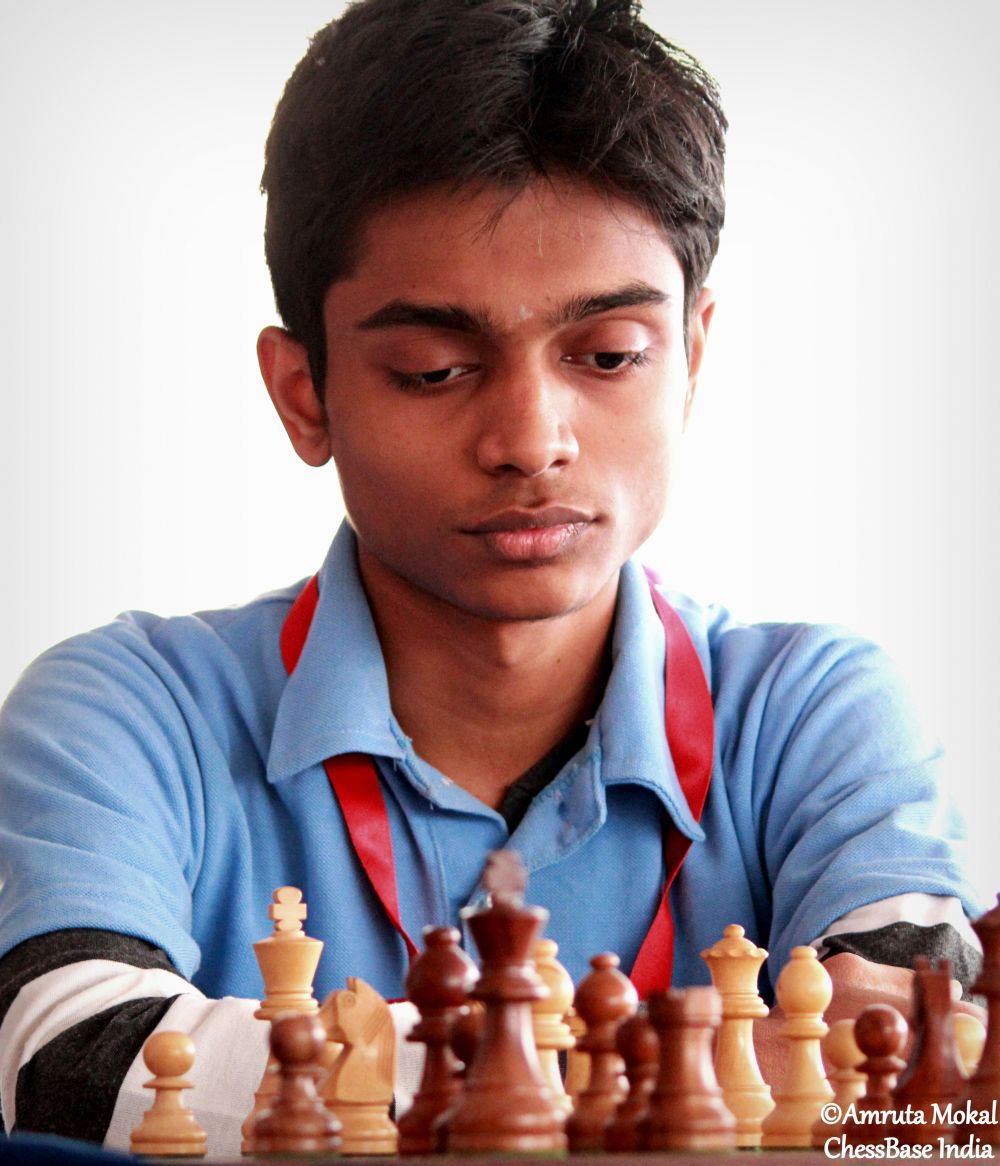 While Karthikeyan lost due to a blunder, Aravindh Chithambaram won thanks to one. | Photo: Amruta Mokal

After three back to back draws in the last three rounds, Aravindh Chithambaram finally scored a win in round nine against the Austrian IM Valentin Dragnev. With the white pieces, Aravindh essayed the Spanish Opening and had almost messed up his initiative when his opponent blundered and allowed white a tactical shot that won him a piece. 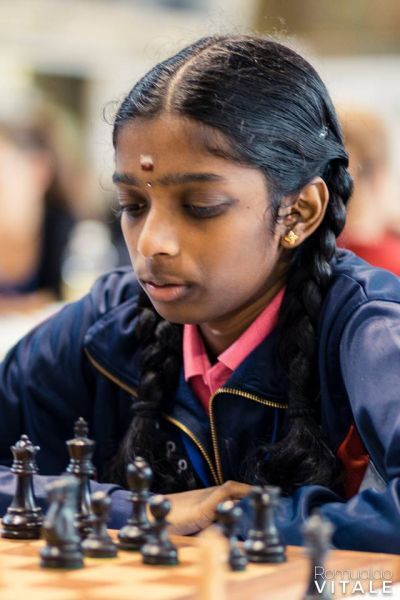 Playing from the white side of the Moscow variation of the Sicilian Defence, R Vaishali came out of the opening with an equal position. In the middle game, she tried generating an attack on the black king but soon lost thread of the position. By the 30th move, she had no attack on the kingside while her opponent had wrecked her queen's wing and was beginning to harvest pawns.

Pune's Akankasha Hagawane defended tenaciously in an endgame with her rook, bishop and one pawn against her opponent, Olga Badelka's queen and two pawns to secure a draw on board 6. | Image: Lakshmi Priya TT

World Junior 06+07: Just past the half way mark Pragg is joint second

Live Games from World Juniors 2017: It's Aryan vs Pragg