The Indian men's team had their first victory of the event in the third round as they overcame stiff resistance from the Belarus team. It was the man out of form Adhiban Baskaran, who played a messy yet brilliant game to beat Kovalev and give India 2.5-1.5 win. In the women's section India lost to Ukraine 1.5-2.5. Three games ended in draws and all hinged on Tania's game. She lost to Gaponenko. The two decisive games of the round happened in the Hedgehog opening and we take a detailed look at that structure in this article. 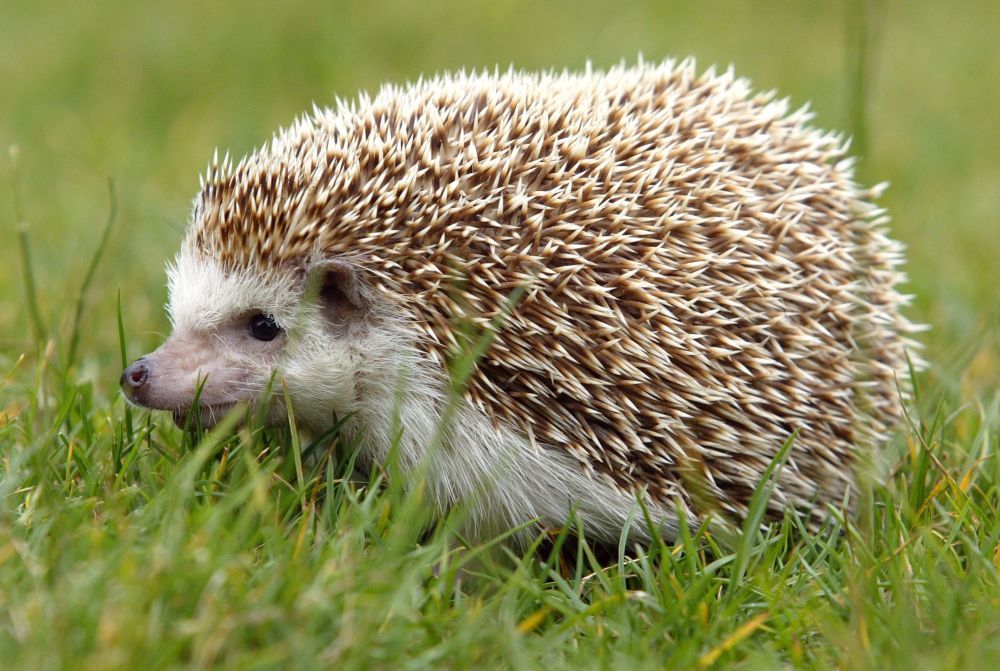 Look at this creature. It's called a Hedgehog. Doesn't it look cute. Some might not think the same, and say that it's ugly. But one thing that definitely no one would say is that this little guy is dangerous! But look closely. It has thorns all over its back. The Hedgehog is a peace loving creature. It will not harass you if you do not disturb him. But if you get too close to him, he fights for his survival. And the fight for his survival can result in grave damage for the opponent.

On the chess board the hedgehog is represented by the following pawn structure: 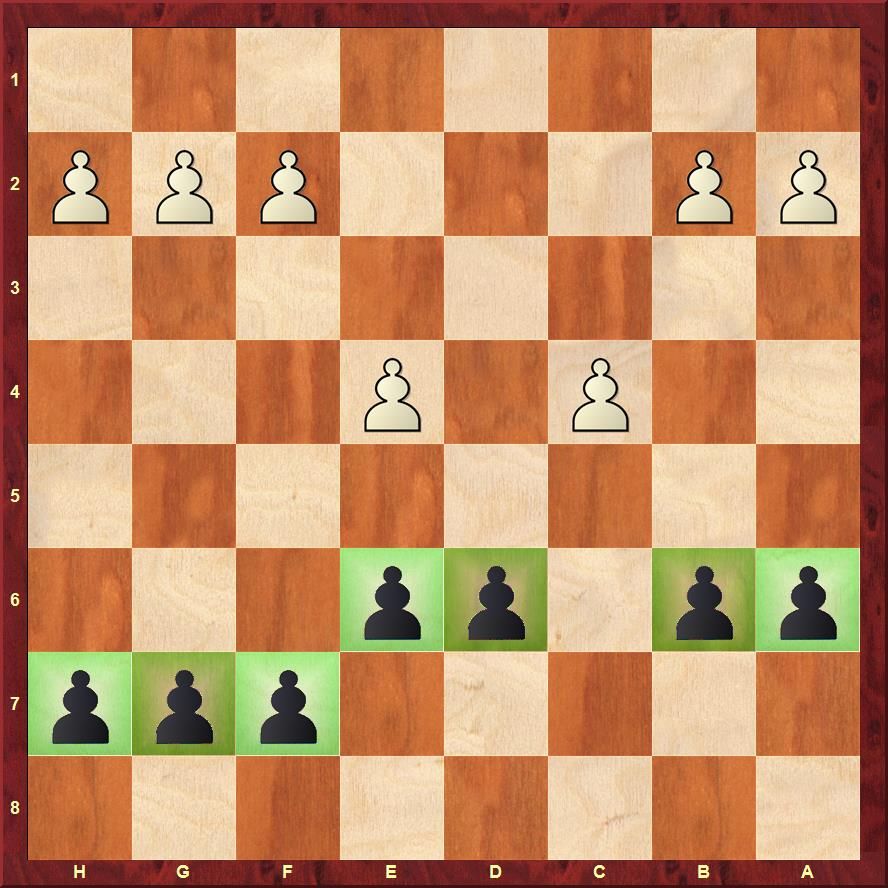 This pawn structure for Black is known as the Hedgehog. White on the other hand has a complete clamp on the position thanks to his e4 and c4 pawns. From White's point of view, it is known as the "Maroczy Bind structure."

If you show the above structure to a Master of the mid 1900s he would dismiss it as being just poor and horrible for Black. No breathing space for Black he would say! But modern day masters have understood the power of the Hedgehog. It is a counterattacking system. Which means that Black is lying low and building up his position on the first three ranks. The moment White does something drastic or comes to near, the Hedgehog unravels and the thorns come out. These thorns in Black's position are the breaks ...d5 and ...b5. When these breaks take place on the board, it's like the entire pent up energy of Black's position is released. 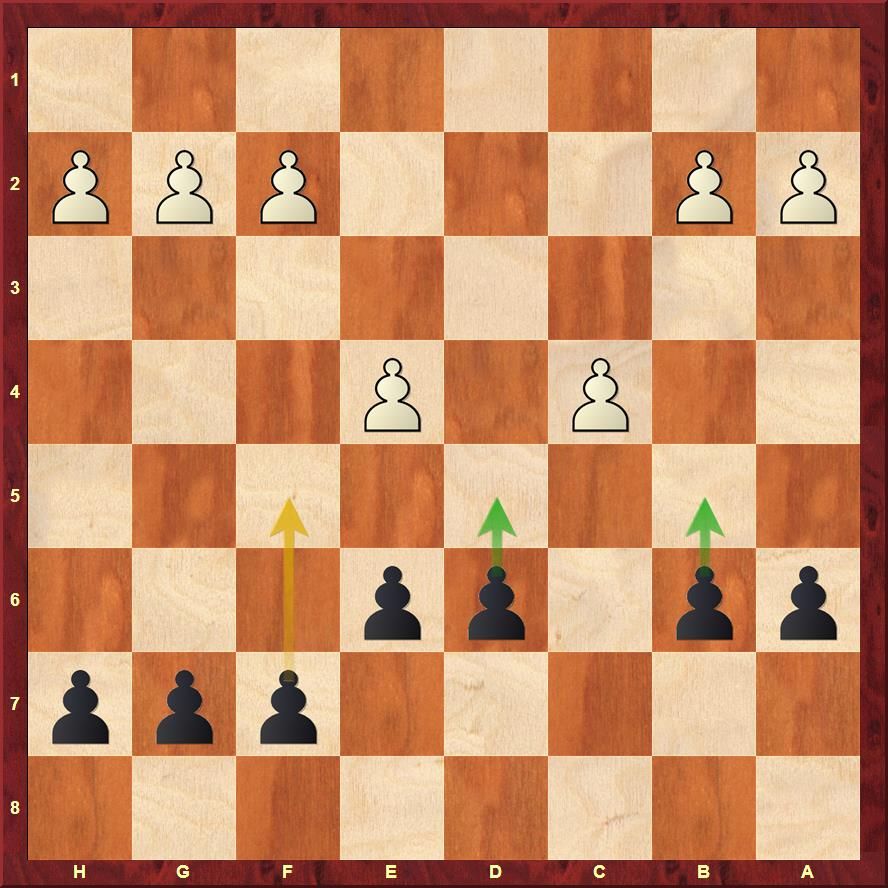 Black's main idea is to break the e4 and c4 stronghold. He can do it with ...d5 or ...b5 and sometimes even ...f5. In fact Black's position is very unique. Usually when you are low on space you want to exchange pieces. But in the Hedgehog, you want to keep the pieces as Black. That's because when you finally play a move like ...d5, you want all your pieces to create threats in the position.

Just to give you an idea of how potent this system is - Ulf Andersson, the Swedish legend, has played 56 games against Anatoly Karpov. Out of that he has won only one classical game. And that victory was from the black side of the Hedgehog structure! If you look at that game carefully, you will realize that Karpov could not really grasp what was going on. His opponent's ...d5 and subsequent exchange sacrifice was a little bit too much for the great Tolya. He went wrong and lost the game.

So why am I giving you such a huge introduction of this Hedgehog system in this article. Well, in the third round of the World Team Championship 2017, the fate of the Indian team was decided by this opening. Adhiban won it from the black side against Vladislav Kovalev and gave India a 2.5-1.5 victory over Belarus and Tania Sachdev lost against Inna Gaponenko and team India lost the match 1.5-2.5 against Ukraine.

Hedgehog game no.1: Kovalev vs Adhiban 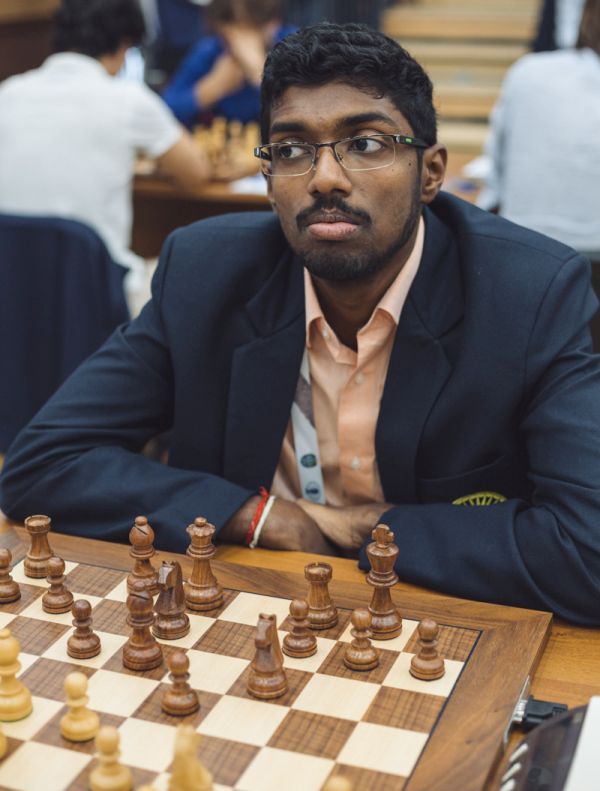 Adhiban had a dismal start to his campaign at this event. He lost his games against Duda and Yu Yangyi.

The thing which has made Adhiban different from players of the same level is his attitude. He is just so positive. And you can follow the man's thought process through his Facebook page where he wrote before the round:

Adhiban did fire in the third round and he was the reason why India was able to beat Belarus.

All three boards ended in draws and Adhiban provided the win 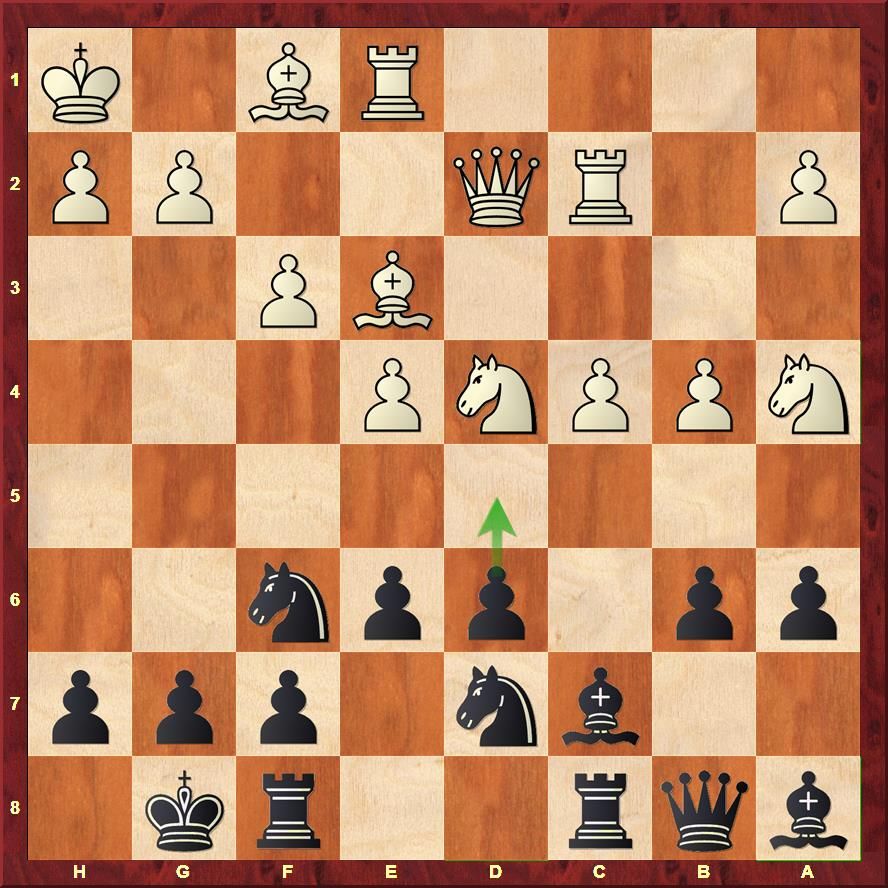 The point to focus on this game is when Adhiban played the move ...d5! Turn off your engines and just look at the position. Just look at how one move can completely change the dynamics of a game. From being a slow developing battle, it is now filled with tactical opportunities on all sides. The h2 pawn is hanging, the e4 and c4 pawns are challenged and a6 will also fall. This is just too much information to take in! Somehow Adhiban was better prepared mentally for this change in the tempo of the game and managed to completely outplay his opponent.

For board wise break down, click here. India now faces USA in round four

Poland leads the event with 6.0/6. Surprise pack are the Turkish guys who haven't lost a game until now.

Hedgehog game no.2: Gapononenko vs Tania 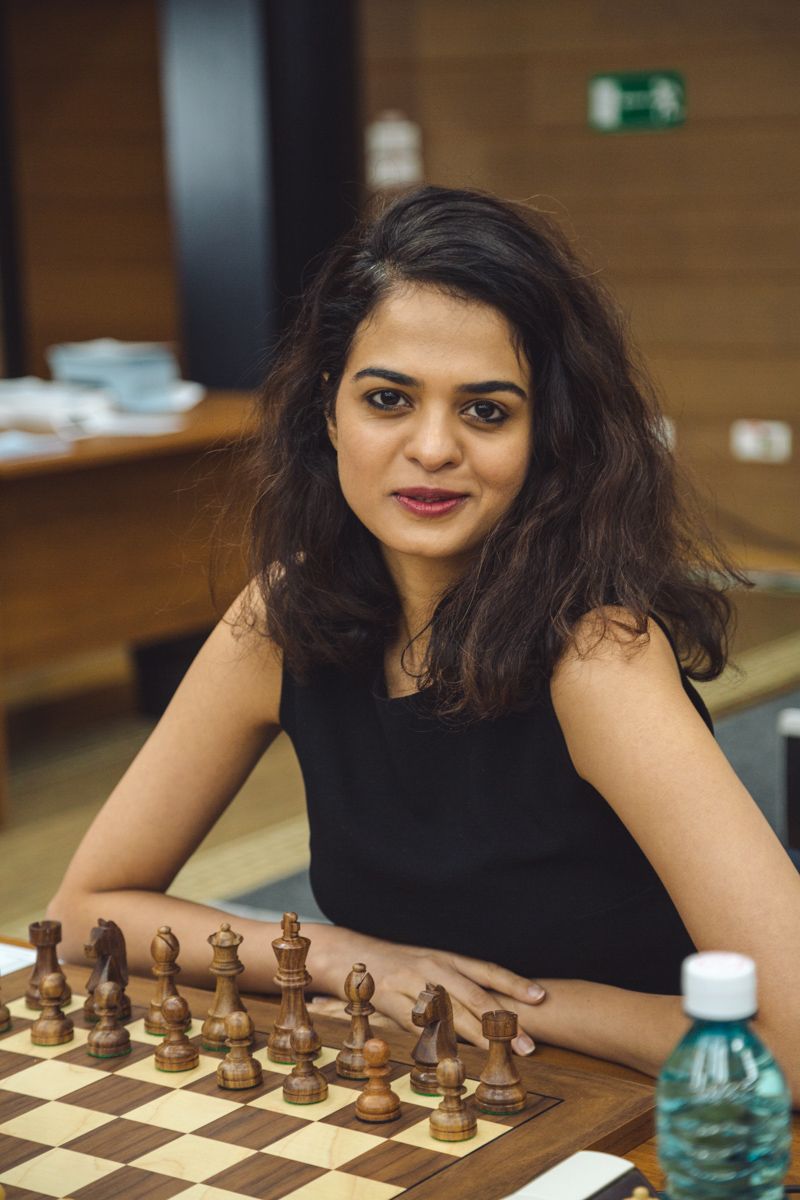 Tania fired in the game between India and USA and we were able to win 2.5-1.5. In the third round she lost to Gaponenko and the Indian team tasted defeat with a score of 1.5-2.5. 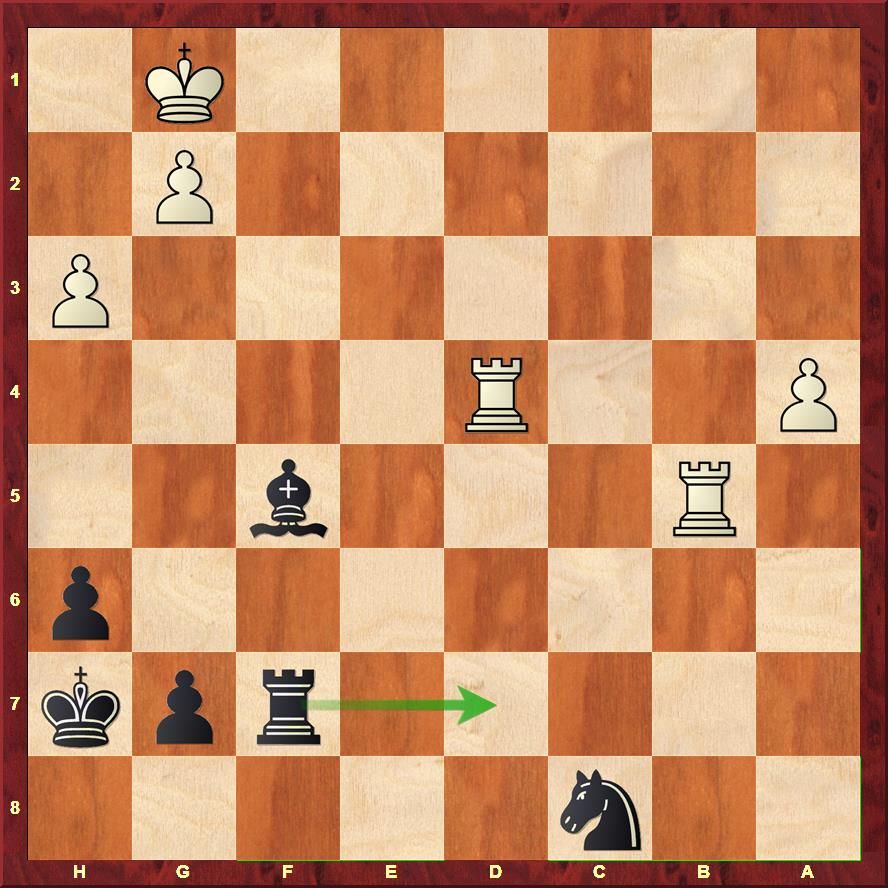 One of the biggest mistakes in the game was ...Rd7 by Tania in the above position. Her situation is not a great one. The a-pawn gives White good chances. However, as long as she has the rook on the board she can create some counterplay. With the exchange of rooks, there can be only one possible result. White wins. And Gaponenko managed to do that in the game.

The Indian team lost the first match of the tournament

Learn how to play the Hedgehog:

As you saw from the games above, Hedgehog is not just an opening but way of life! It's a pawn structure that if learnt well can be useful in many different systems. Hence, it would make good sense to learn all the possible motifs available to both sides in the opening. In his 12th DVD of the Powerplay series Daniel King teaches the Hedgehog in a detailed manner. You can get it from the ChessBase India shop for just Rs.999/-

Description of Power play 12: The Hedgehog

The Hedgehog is not just an opening, it is a system. A system that can be used against 1 c4, against 1 e4 and also 1 d4. Some players, such as the Swedish Grandmaster Ulf Andersson, appear to play very little else with the black pieces. Black’s pieces curl up behind a row of pawns on the third rank and invite White to attack – at which point they spring out from behind the barricades to give the aggressor a nasty shock. The Hedgehog can easily transform into a tiger... This is modern chess.

Karpov was one of the first great exponents of the counter-attacking Hedgehog, Kasparov was also a great devotee and Kramnik and Anand are also experienced users. This DVD not only gives you specific theoretical advice on the main Hedgehog lines, but also looks at general strategy for both sides. Whether you play with White or Black, this DVD will help your game. Throughout the DVD, specially selected positions will enable you to test your understanding of the subject. The Power Play series is suitable for anyone looking to improve their chess, but also provides ready-made lessons and exercises for a trainer. Video running time: 5 hours.