Just as the five-time world champion Vishy Anand returned to India from his positive campaign at the Tal Memorial 2016, we caught up with him for an informal Q&A, where Anand commented about the 2016 World Championship, Karjakin's chances against Carlsen, and retirement plans. Know more...

It will trigger memories... — Vishy Anand

For first time in close to a decade, Anand will not be playing for the world championship title when the finals begin next month in New York. He came close, though. He almost won the Candidates 2016 tournament, but for those two losses with black.

Vishy Anand returned to India after his fourth-place finish at the Tal Memorial 2016 a few days back. Although the games were impressive in general, Anand still thought he had a thing or two to learn from the outing.

Notice the humility with which he is ready to recognize his failures? Even at 46 years of age, the five-time world champion believes in learning from his mistakes. Chess is not about playing perfect moves for him. It is learning by making mistakes, and not repeating them.

Vishy has done this all this life.

Q: Do you feel strange about not playing the title match -- something like, I will be there next time? Climbing up the qualification ladder will be much tougher than it was two decades back, for example.

A: I guess even when I enjoy it as a spectator, it will trigger memories. About the next World Championship cycle, I will certainly try again, let's see. 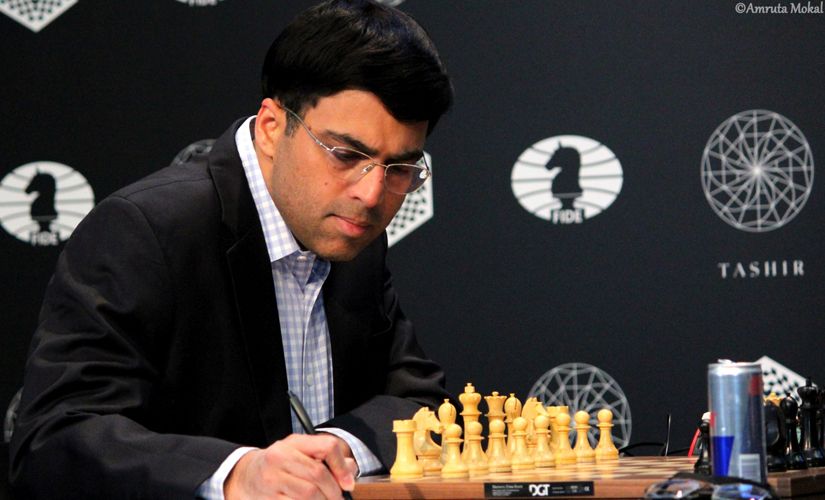 There, we have a good news: he is not going anywhere!

Q: You have played both Carlsen and Karjakin a multiple number of times. How would you analyze the match in terms of their past performance?

A: Carlsen has been very impressive recently and he is the favourite. However, Karjakin is a tough competitor and I am curious to see what he can do against Magnus.

Q: What strategies and factors do you think would be in play in this match?

A: It's hard to say — I guess they will both be aiming for some surprise value.

Q: What do you take away from your games this year?

A: Steady, with the exception of Gibraltar. The candidates had many highs and lows as well. 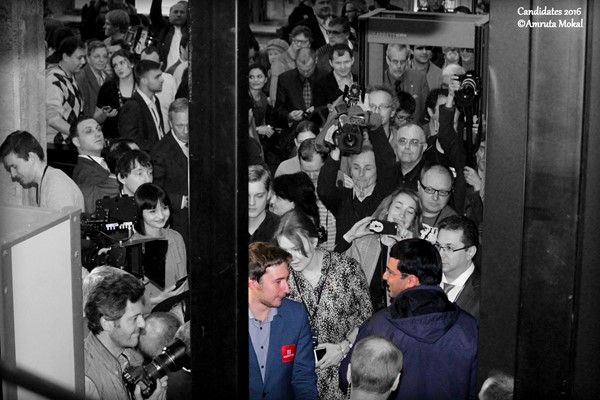 Anand passed on the baton to Sergey Karjakin at the 2016 Candidates. [Photo: Amruta Mokal]

Q: Any plans for Dussehra?

A: Well, just the normal way at home.

Q: Has Akhil taken up any interest in any sport yet?

A: Akhil dabbles in lots of activities, but I don’t think he has a favourite yet. He likes chess.

Q: Do you feel bad when journos ask you about retirement? In any case, should we just stop asking for some years?!

A: I am quite used to the question by now! I'll just give the same answer!