The tournament with rupees five lakh prize fund, SYNA Open 2016, has already begun in Katni, Madhya Pradesh. After three rounds we have seventeen players with a perfect score of 3.0/3. It will be an intense fight for the top spots as strong players like Swapnil Dhopade, N.Srinath, Himal Gusain, Himanshu Sharma are giving it their all. Thoroughly inspiring is to see the entire staff of the SYNA international school completely dedicated in organizing a top notch event. A pictorial report from Katni.

The much awaited SYNA Open 2016 kicked off on the 24th of April in the SYNA International school, Katni, Madhya Pradesh. It is a nine-round Swiss tournament that has attracted 170 players from all the corners of India. The event will last for six days and the last round will be played on 29th of April. The first prize of the tournament is a hefty Rs. 1,00,000 and this has attracted one grandmaster and six International Masters to participate in the tournament. GM Swapnil Dhopade is the top seed with a rating of 2499. 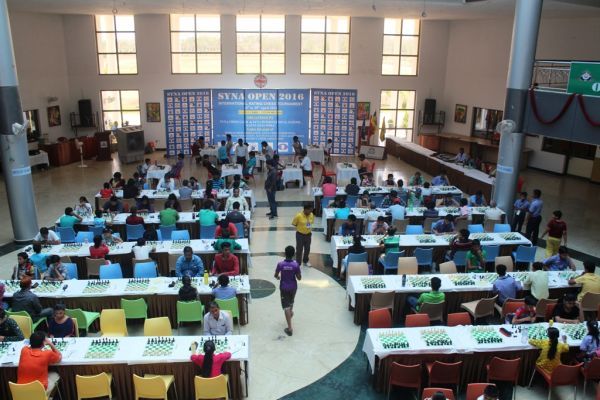 The huge and spacious playing hall. The players do not have to worry about brushing their elbows with the person sitting next to them while making their move! 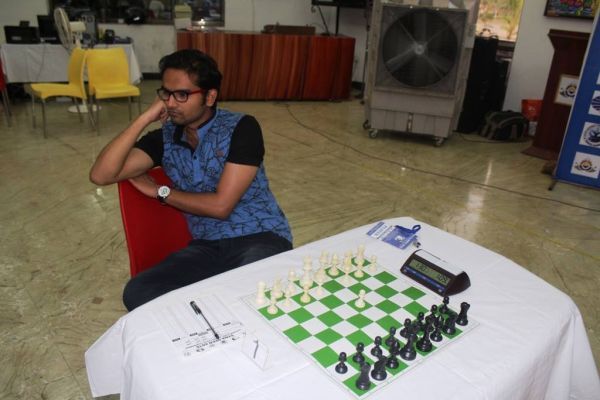 What do you do when your opponent doesn't turn up for the first round! GM Swapnil Dhopade got a walkover in round one and then won the next two games and is currently on 3.0/3. 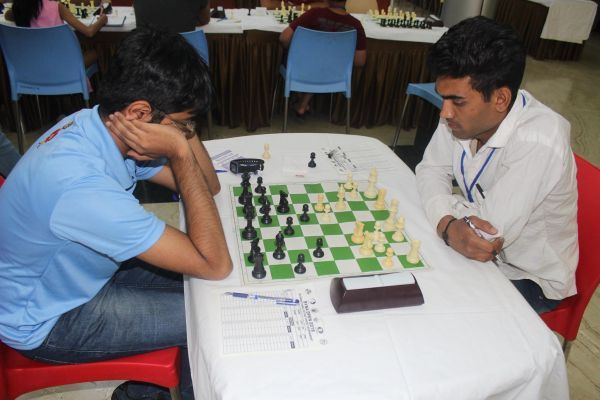 Srinath Narayanan (left) had planned to play in the European circuit during this period. However, due to visa issues he had to cancel the trip. He immediately confirmed his entry at the SYNA Open and is now on 3.0/3. 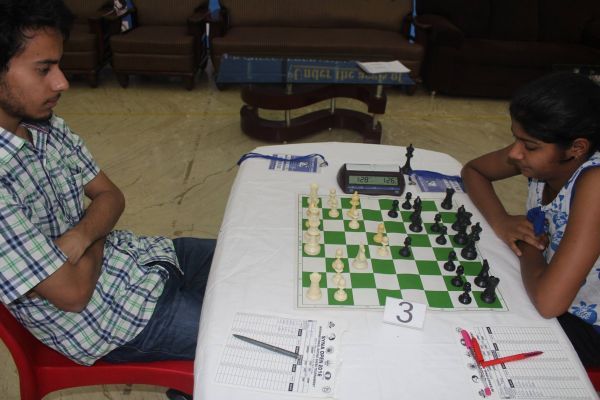 Himal Gusain sports an impressive rating of 2429! It is only a matter of time before this lad becomes an International Master. 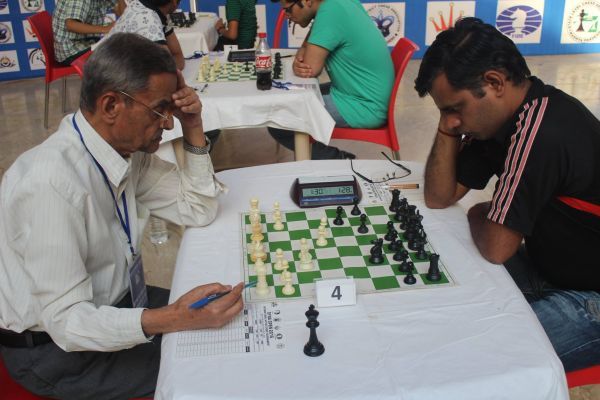 If it is a good tournament, you can be sure that IM Himanshu Sharma (right) will be there fighting for the top prizes! His love and passion for playing chess is unparalleled. His room mates often tell the tale of how he was awake until 3 a.m. in the night analyzing a chess position! In the picture above you can see Himanshu fighting it out against the 80-year-old Nasir Ali Syed of Uttar Pradesh. Did you know Nasir Ali is a former National Champion! He won the National title in 1967 in Pune ahead of Manuel Aaron. He has drawn against strong players like Mark Taimanov and is surely one of the legends of Indian chess.

Here's his game against Mark Taimanov from 1982, New Delhi: 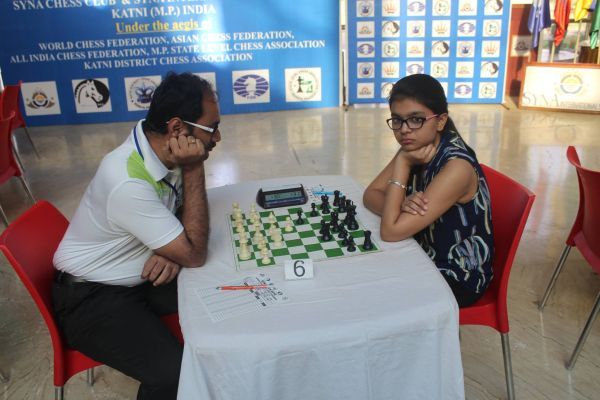 It is good to see IM Suvrajit Saha back in action after quite some time. He is the fifth seed and is currently on 3.0/3.

You can check the entire pairing list of round four over here.

We can already see some mouth watering clashes as on the top board the coach (Anup Deshmukh) takes on his student (Swapnil Dhopade).

One of the difficulties in organizing a tournament is to find good hands to help you with the administration. There are hundreds of tasks to be completed: accommodation has to be taken care of, food has to be provided, the playing hall has to be in good condition, all the needs of the players have to be taken care of and so on. It is obvious that you need a good team of hardworking and dedicated inviduals to achieve a high level of organization. This is not at all a problem at the SYNA Open as the entire school has joined in the task of making this tournament a grand success! When teachers become the organizers! 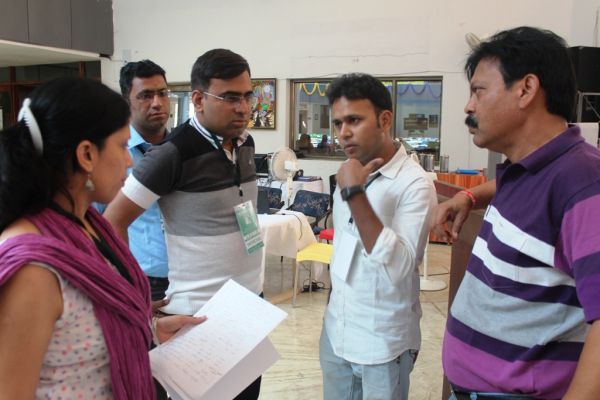 Organizing secretary Niklesh Jain makes sure that everything is under control. His dream is to organize a tournament where players would have minimum hassles and can focus on playing chess. 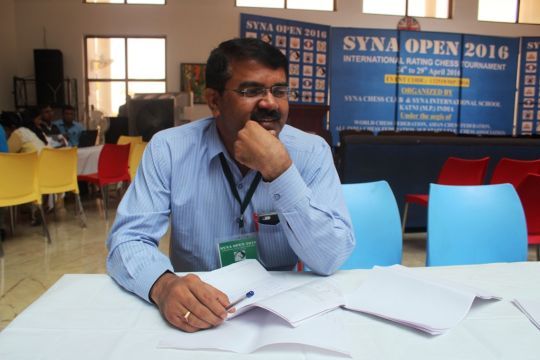 The maths teacher, Vijay Tiwari, is the accommodation incharge at the event! 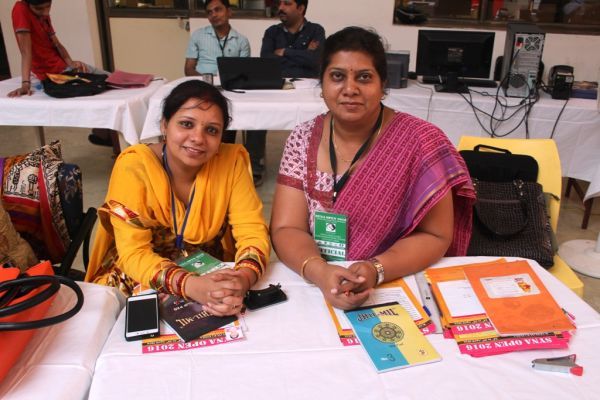 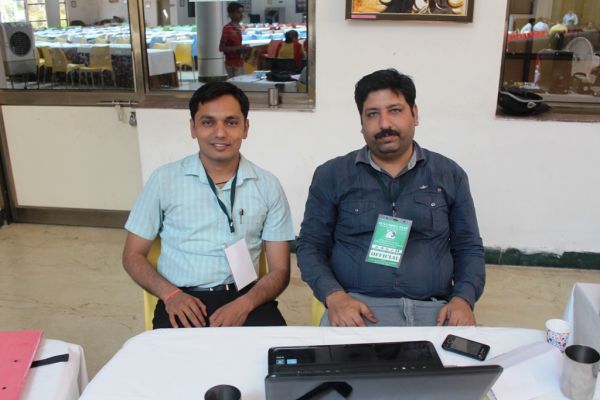 Experienced arbiters FA Jitendra Chaoudhary and FA Yashpal Arora are in charge and they are supported by... 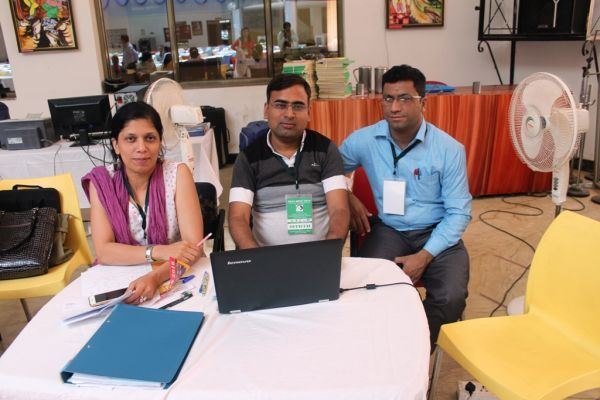 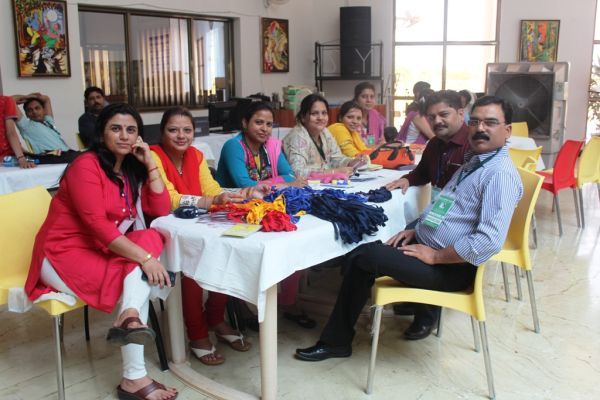 It is so good to see that these teachers not only believe in academic excellence but also whole-heartedly support the extra curricular activities going on in the school. Thanks to this approach you can expect a lot of talents emerging from SYNA International school in the near future. 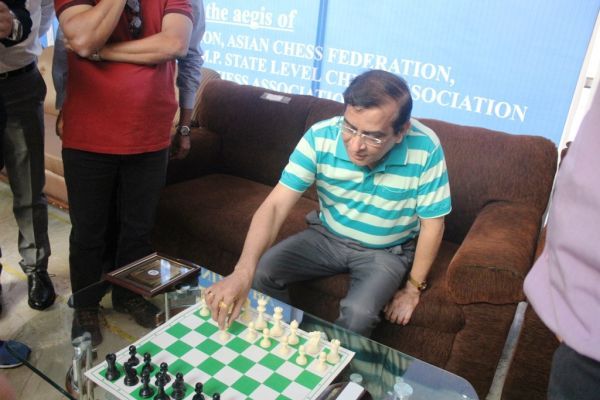 The collector of Katni inaugurates the event 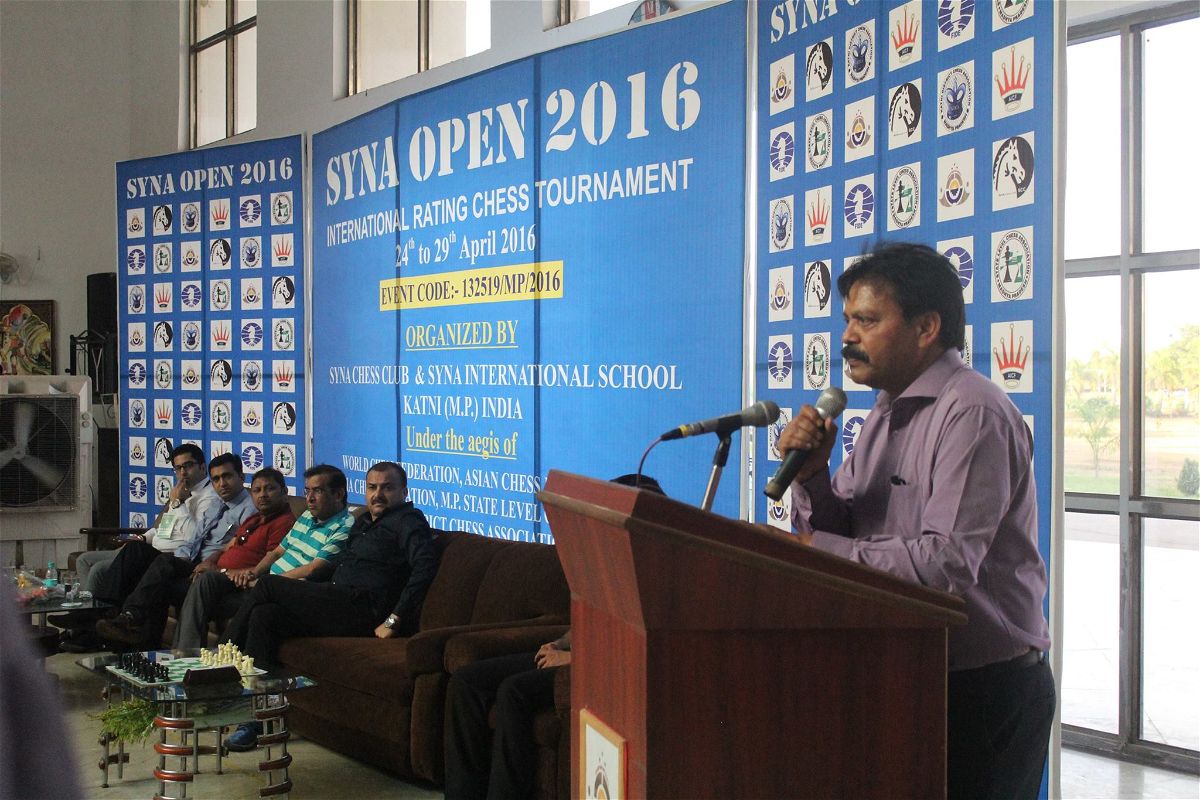 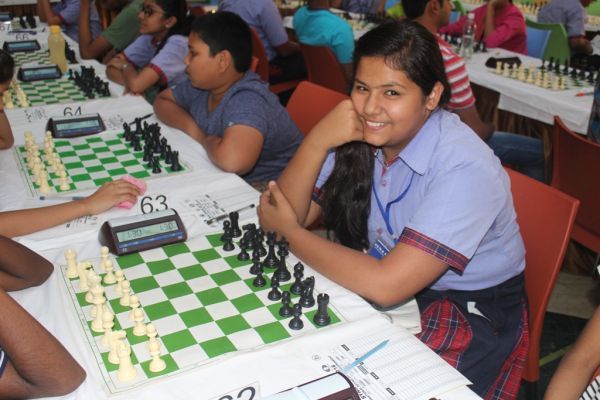 Kashish Manglani of sixth grade is enjoying herself! 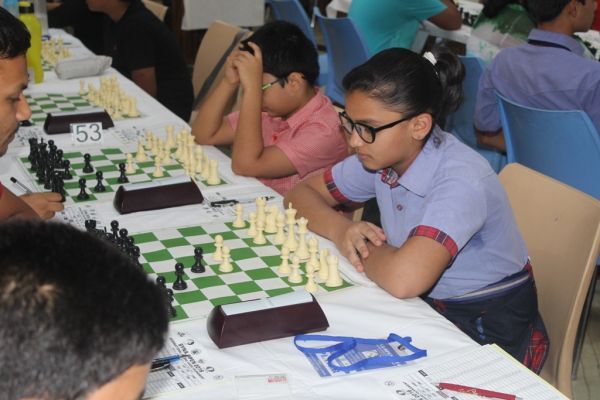 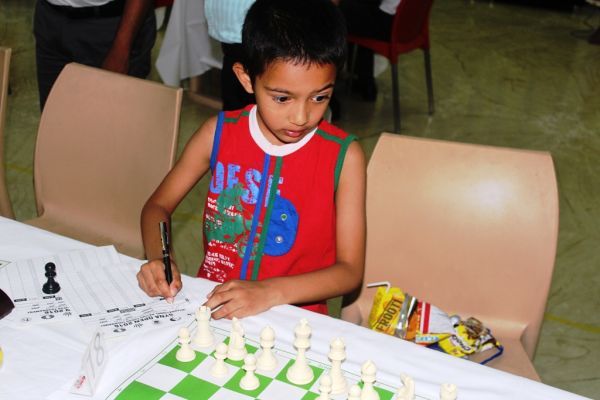 Born in 2010 Lakshyesh Gupta has a rating of 1042, and was at one point the youngest rated player in the world! 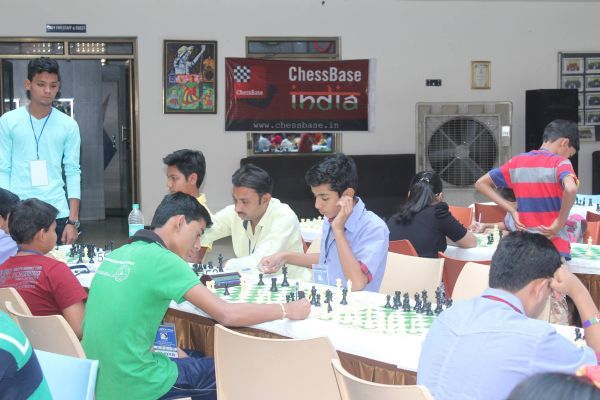 The ChessBase India banner on the wall! ChessBase India is supporting the event by giving away 75 prizes at the event! All the prize winners will receive one month free subscription to Premium ChessBase Account!
Pictures provided by organizing team