Sergey Karjakin: the inside story 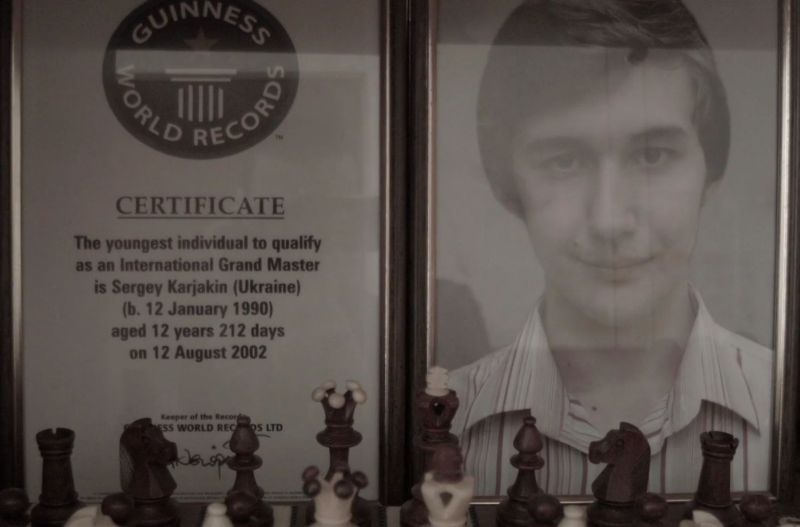 Sergey Karjakin became world's youngest grandmaster at the age of 12 years and 212 days. It was, and still is, a world record. 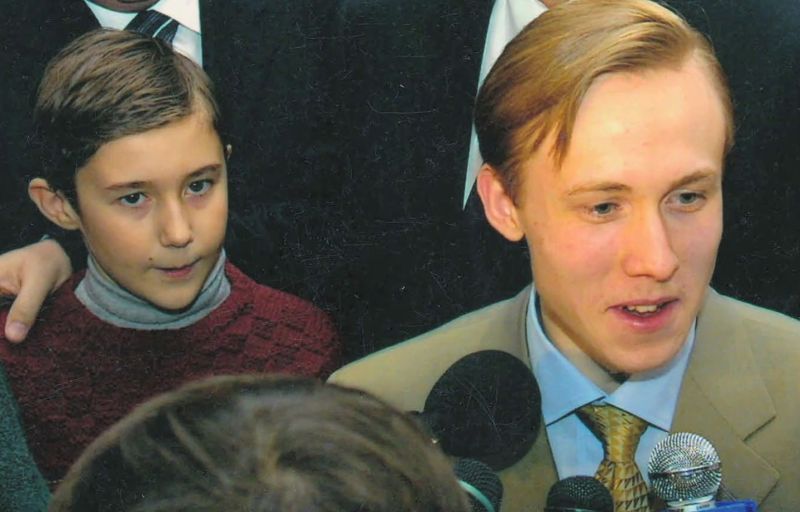 When Ruslan Ponomariov became the FIDE World Champion in 2002, 12-year-old Sergey Karjakin was his second

Few months after Sergey became the youngest grandmaster, he beat the strong Latvian Alexei Shirov. That is when Karjakin said that he would like to become a World Champion at the age of 16. This was by no means a joke, as Sergey really had it in him to make those words come true. Fourteen years have passed since then and Karjakin is nearly 27 years old now. After winning the gruelling Candidates in Moscow 2016, he got his shot at the world title. And after eight rounds of the World Championship, that is currently in progress in New York, he leads with a score of 4.5-3.5 against Magnus Carlsen.

Maybe in a few days we will have a new World Champion. Maybe Carlsen will fight back and retain his title. Whatever be the result, the most natural questions that comes to the mind of any chess enthusiast are: How did Sergey become the youngest grandmaster in the history of the game?, Why did it take him such a long time to reach the World Championship final?, and how was he affected by the war between Russia and Ukraine over Crimea, the place where he was born. 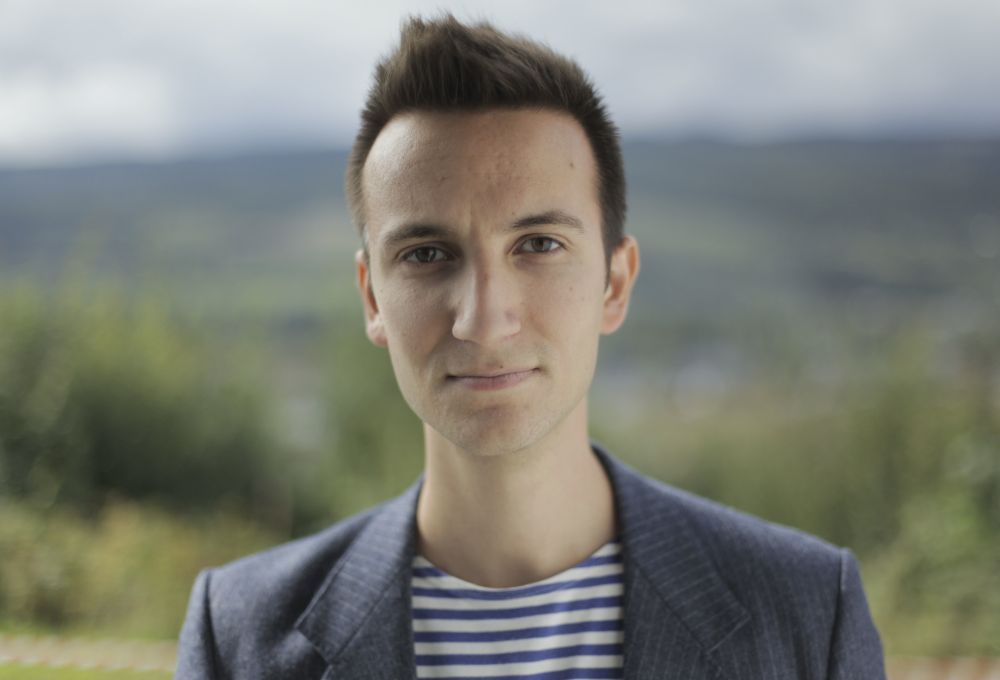 Why a film on Sergey Karjakin?

Alexander Turpin studied film direction in the Norwegian Film School. He graduated as a director this year and was looking out for interesting projects. Chess has always been a fascinating game for him and he has an Elo rating of 2127. As a 12-year-old kid when Turpin was fighting with his friends on who would be the first one to get an Elo rating, there was this wunder-boy in Ukraine who was smashing everyone and nearly became a grandmaster. He is, of course, none other than Sergey Karjakin.

Turpin was also very curious about the Chess School in Kramatorsk and the A. V. Momot Chess Club. He also was inquisitive to know how the war between Russia and Ukraine affected Karjakin's life. Combine this with the fact that Sergey was going to play Magnus Carlsen for the highest chess title in November 2016, Sergey's life became a natural subject for a documentary.

How was the documentary made?

Turpin was fortunate enough to save 2000 Euros from his student grants. He decided to use those savings to finance the film. The reason he could do the film without any other funding was because a lot of his friends supported the idea by letting him borrow equipment for free.

Says Alexander, "I started my research on Sergey this summer, but I had some problems in getting a confirmation from Karjakin's manager that I could do an interview with him. When September came I was still uncertain about the project. But then I decided to start filming and just hoped that Sergey would find time for me. Alexander Martynkov at The A. V. Momot Chess Club in Kramatorsk was very co-operative from the start, so I travelled to Eastern Ukraine in September and met Sergey's old coaches. From that moment I have been working on this film non-stop. In late September I visited Ruslan Ponomariov in Getxo, Spain. In October I met Sergey in Moscow and also visited his parents in Crimea. You could say that the film was done in three months, from mid-August to mid-November."

Contents of the documentary

The beauty of the 22-minute documentary is the simplicity with which it is made. Photos and videos are weaved together with excellent narration to create a movie that doesn't let you take your eye balls of the screen. 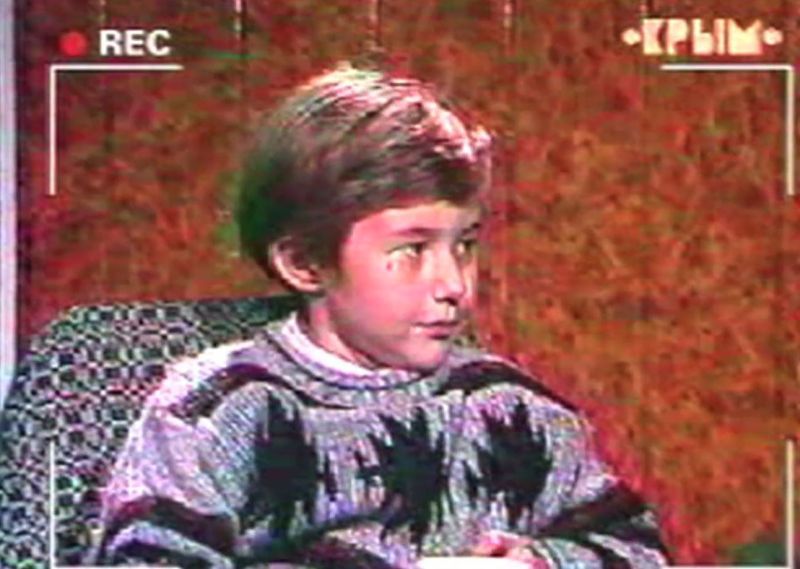 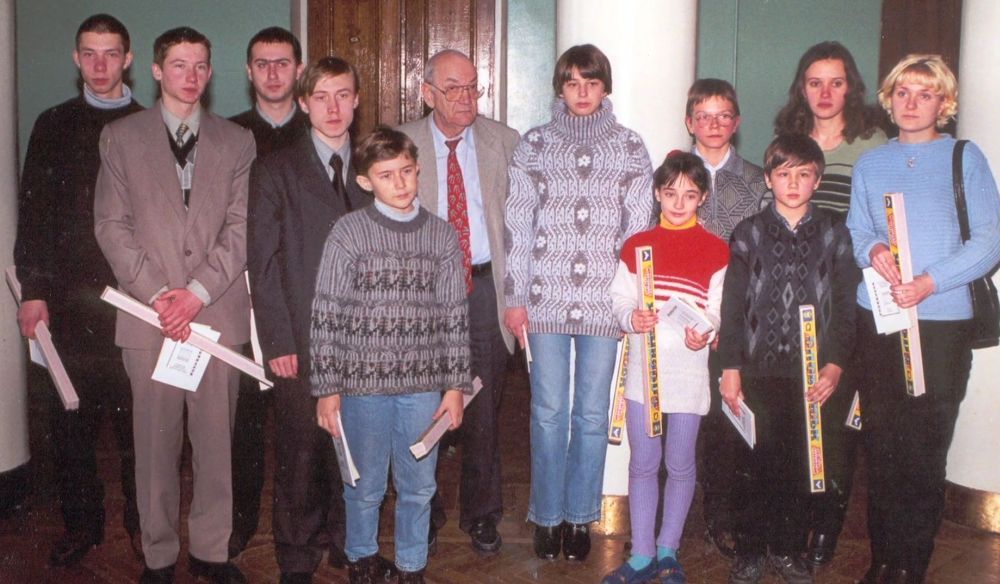 How many grandmasters and future talents can you recognize? The very famous Kramatorsk chess school in Ukraine. 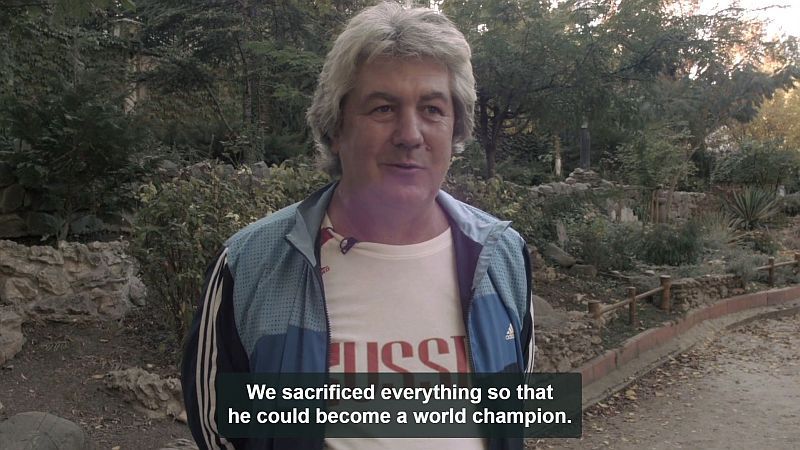 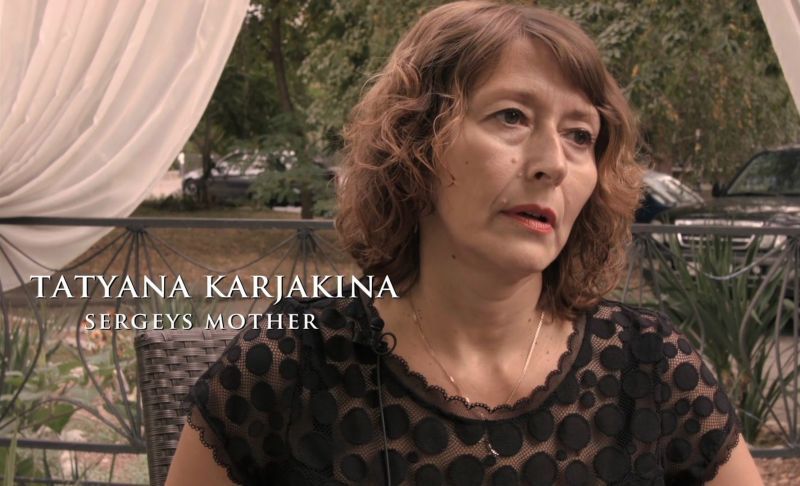 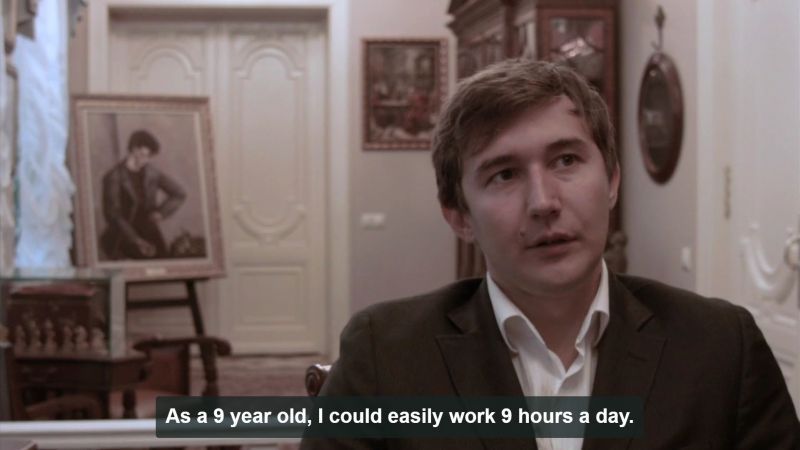 Nothing good ever comes without hard work 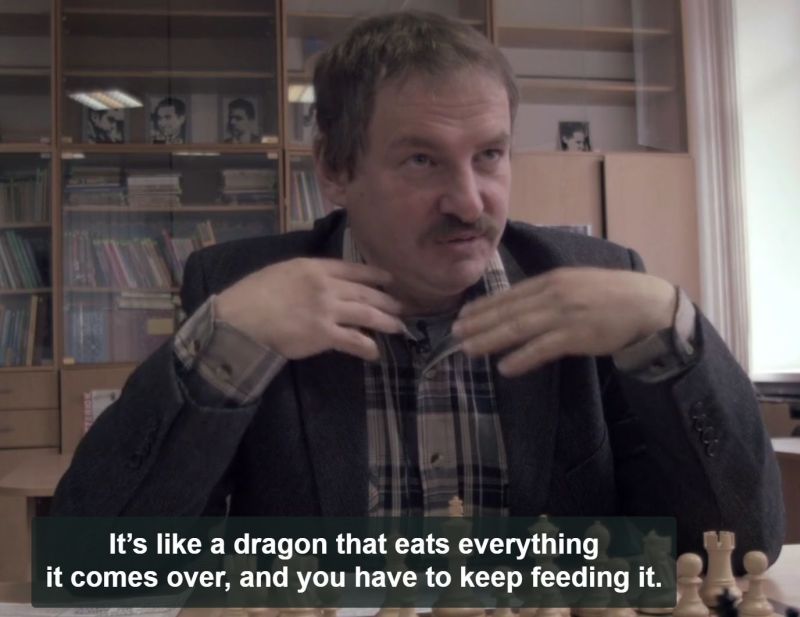 I simply loved the way in which Alexander Alexikov, Sergey's former trainer speaks about his capacity of grasping chess material 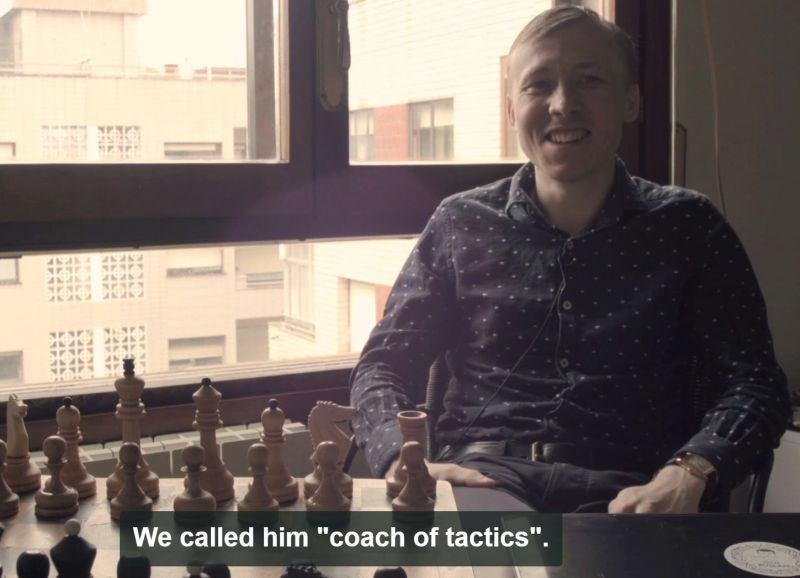 When Karjakin was Ponomariov's second, everyone called Sergey the coach of tactics because he was so good at it! 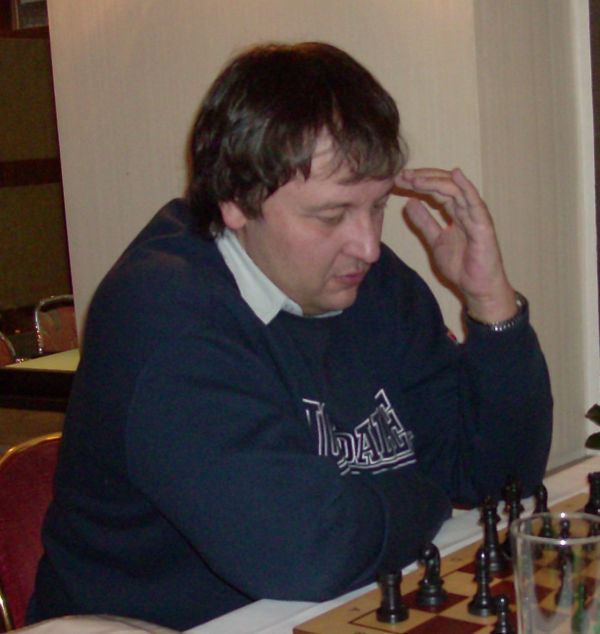 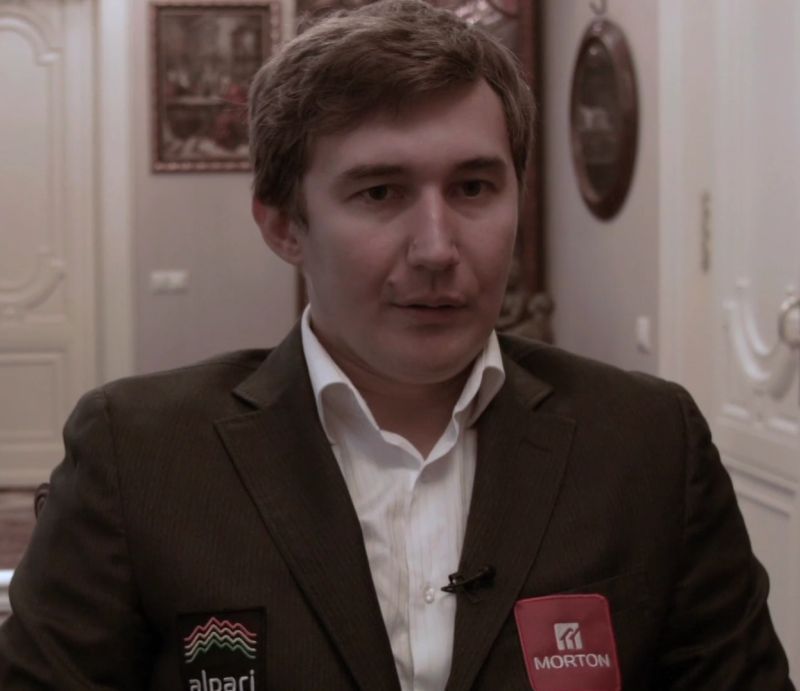 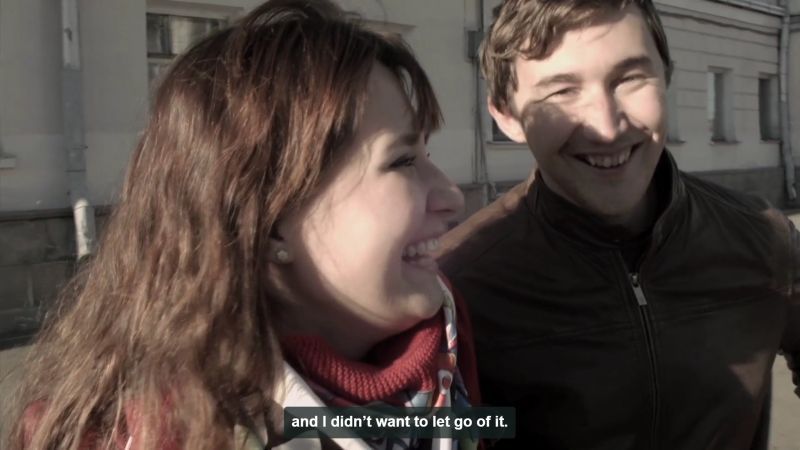 Sergey with his wife Galia Kamalova 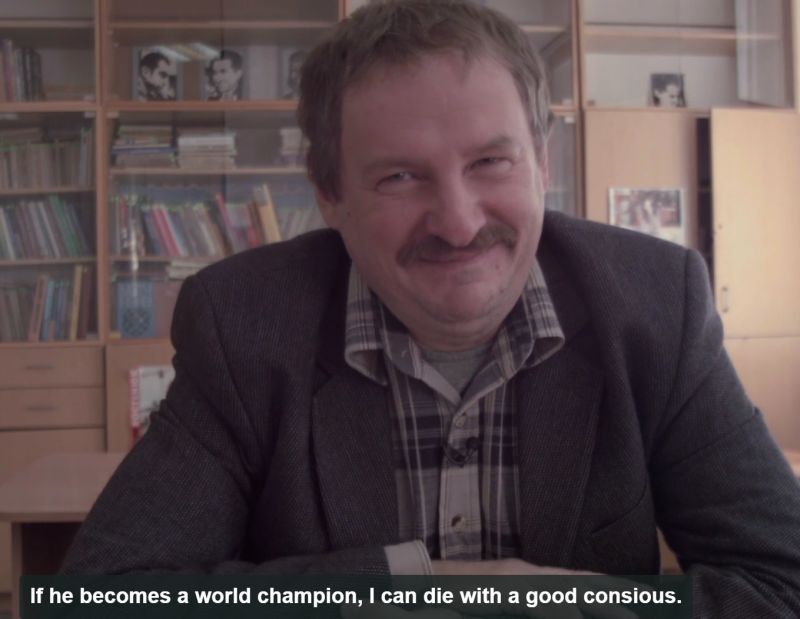 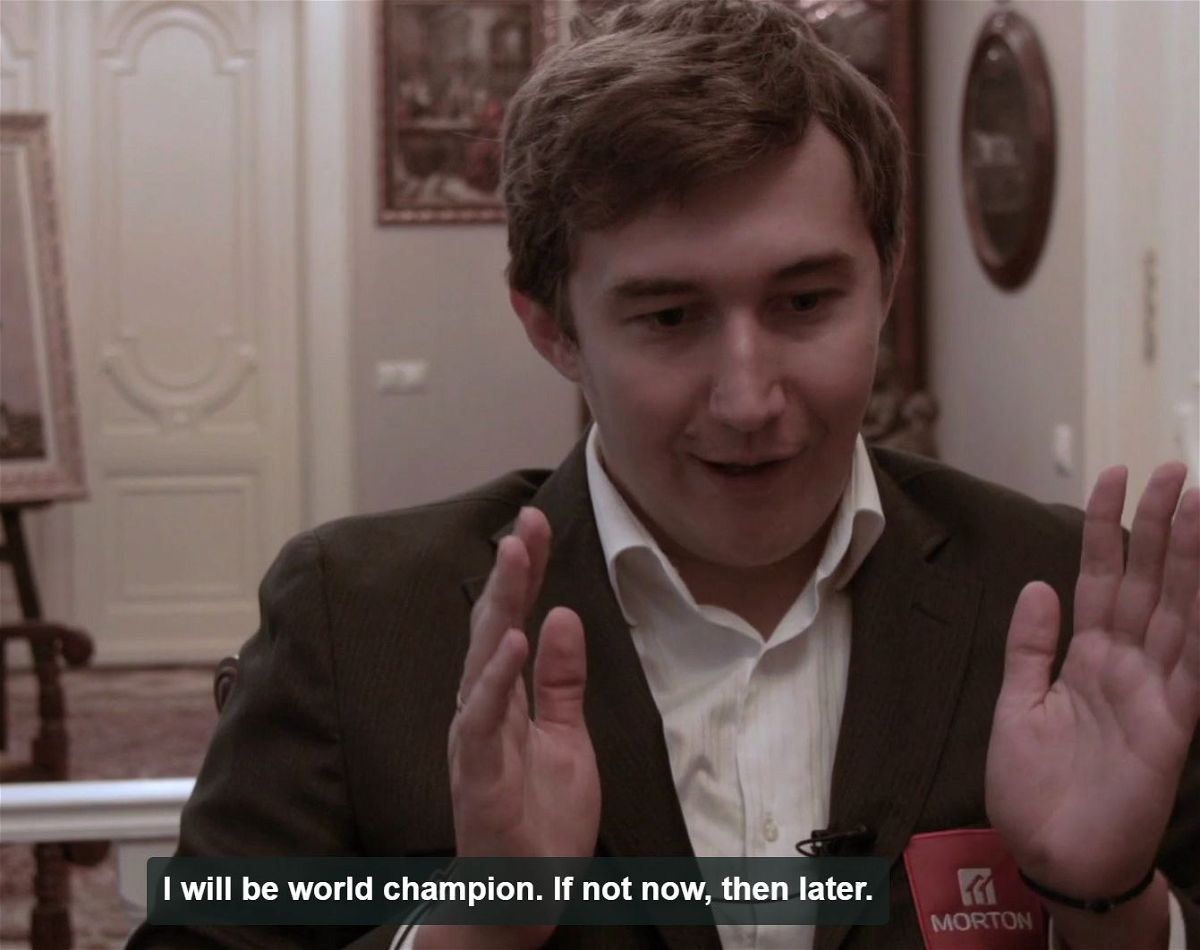 "I will be the World Champion. If not now, then later. But better if it happens now!"

I loved the movie. It covers Sergey's entire life. You get to know his parents, his childhood, the coaches who shaped his chess, and the struggle to be one of the best players in the world. There is something for everyone in there: young players learn how to work hard at a tender age, parents get to know how much effort they have to put in, strong players will realize the worth of being patient in trying to achieve their goal and last but not the least, coaches will know what it takes to create such a champion.

How to watch the movie?

Rent or buy the movie on Vimeo

Alexander Turpin was born in Stockholm, Sweden in 1989 and moved to Norway three years ago (in 2013) to study film directing at the Norwegian Film School. "Sergey" is his first documentary. He has lot of different ideas regarding future projects, most of which are fiction films, since that is what he has studied and has most experience in.  He thinks that it would be interesting to do a film about the concept of "stalemate" and the stalemate rule.

Turpin would like to thank the following people who helped him in this project- translators in Ukraine and Crimea, Ivan Chernichkin and Olga Zhaglina respectively. And fellow friend from the film school Jon Carlstedt who has helped him produce the film. Composer Kate Havnevik and sound designer Bror Kristiansen should also be mentioned. But overall it has very much been a one man project.