India to host quadruple GM Tournaments at the turn of 2017!

Chess is becoming an increasingly popular sport in India. Not only are Indian players doing amazingly well at international events, our organisers have also upped the ante and a significant rise in Grandmaster tournaments has been seen in the country. A hallmark of this is the fact that for the end of the year, four back to back Grandmaster tournaments have been lined up in the country! You heard it right, the months from December 2017 to January 2018 will be witnessing four International Grandmaster events in Bhopal, Mumbai, Delhi and Chennai. In this report, we have all details about the forthcoming Indian winter circuit tournaments along with a few tips on what one can expect from each of the tournament destinations as a tourist.

There was a time when chess wasn’t a very popular sport in India. International tournaments were organized far and wide. But just then, in came the ‘Tiger from Madras’, Viswanathan Anand.  Soon, Vishy’s name became synonymous to Indian chess. His unprecedented achievements in the field inspired many others to follow his footsteps.  The result: today India has 50 Grandmasters, 7 of whom are among the top 100 of the world, not to mention the plethora of young talent spearheaded by prodigies like IM Praggnanandhaa and IM Nihal Sarin! 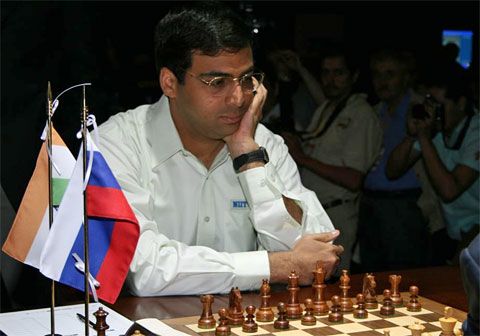 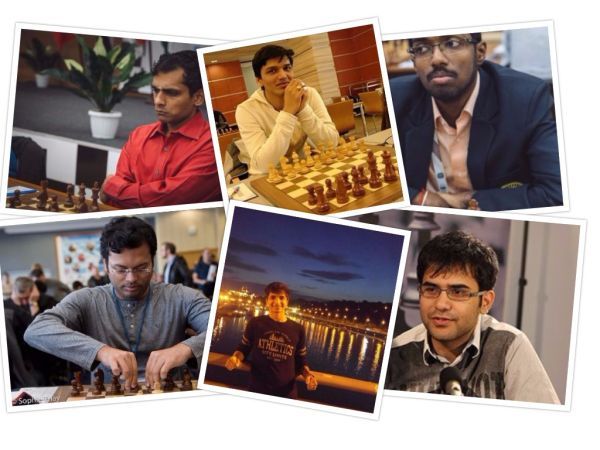 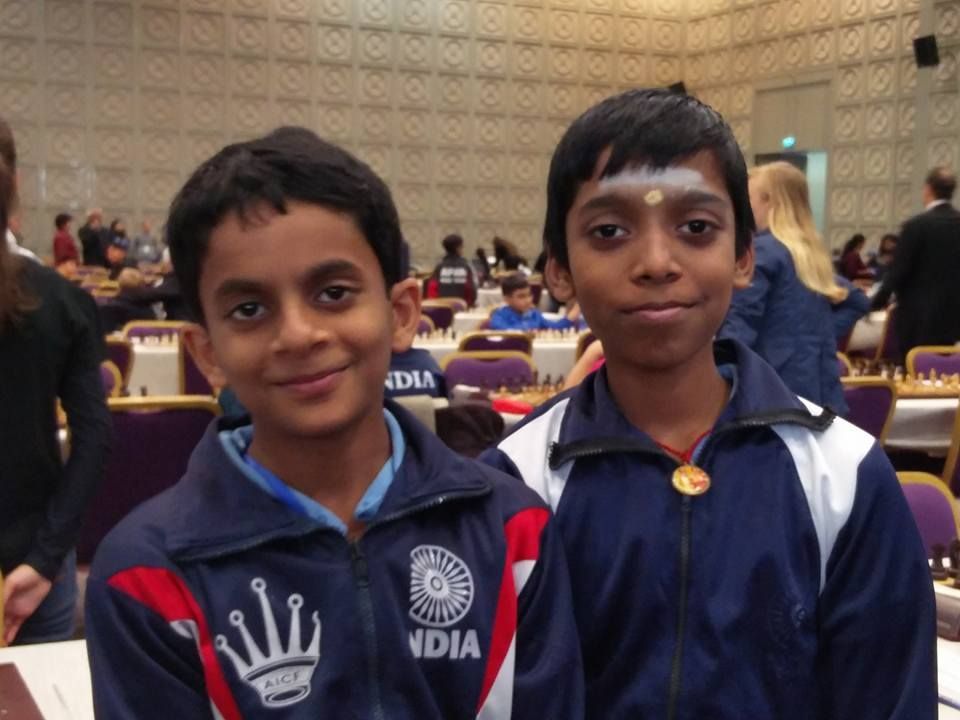 As for international tournaments, the scene wasn’t the best until a few years ago. Perhaps, it is still not the best. But organizers and enthusiasts from all corners of the country have been working hard to bring about a change. As a result of their efforts, India will be hosting not one, but four successive Grandmaster Tournaments at the turn of the year, this year. So if you’re looking for an event to showcase your skill and skyrocket your rating or earn norms that will win you titles, these are the events you should watch out for.

The inaugural event of the Indian Winter Circuit, Bhopal International Chess Tournament will be held in Bhopal, the capital city of Madhya Pradesh, the state better known as the ‘Heart of India’. Besides giving the opportunity for Indian and international players to lock horns with some strong Grandmasters from around the world, playing here will give participants a chance to explore one of India’s greenest cities. 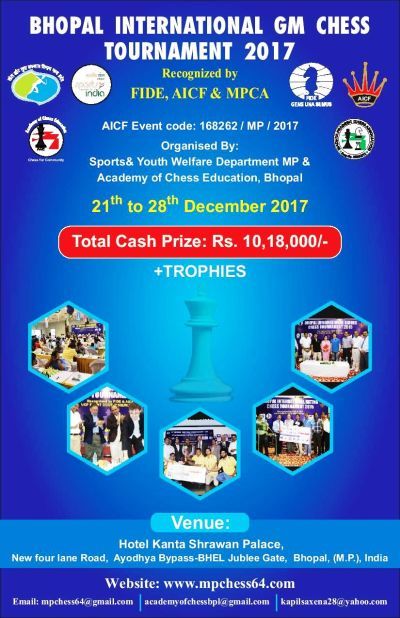 If you’re interested in adding a culture trip to your tournament, just hop in a few days earlier and visit the Madhya Pradesh Tribal Museum, the ancient site of Sanchi or the Gohar Mahal, a palace built by Bhopal’s first female leader. 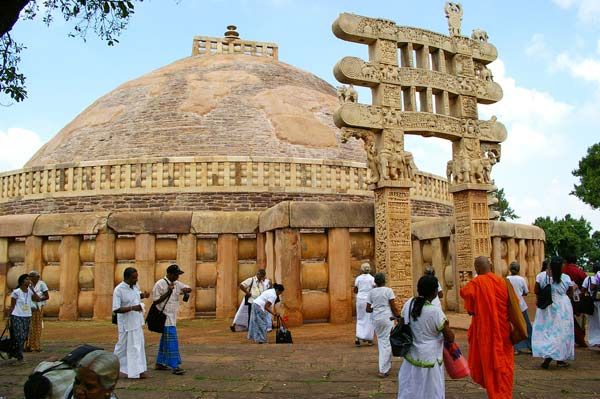 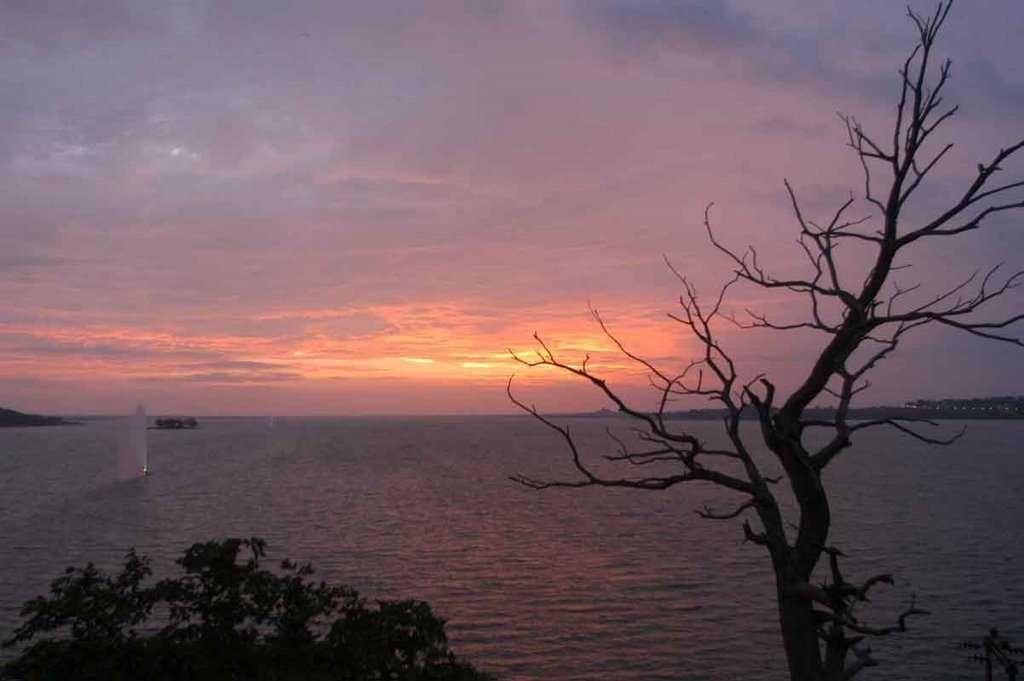 Sunset at the Lower Lake in Bhopal

Play a GM tournament in the city of dreams, Mumbai. The IIFL Wealth Mumbai International Chess Tournament is known for providing top class playing conditions and high prize money.  The tournament will be held in two categories: Open and Juniors. While the Open tournament is open for everyone, the Juniors category is for players below the age of 13. 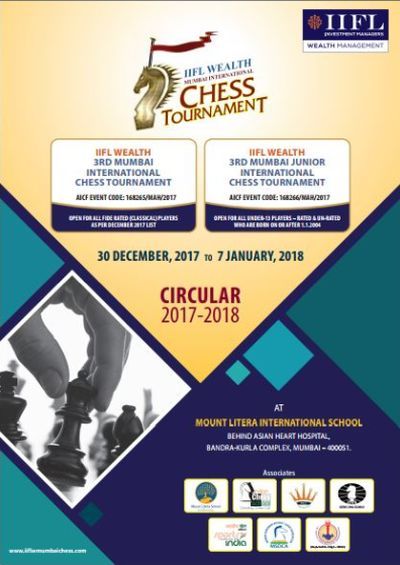 Playing here will definitely give you an adrenaline rush! If this is going to be your first time in Mumbai, we have to tell you that the city is a powerhouse of energy. The hustle and the bustle is simply relentless. As they say, “this city never sleeps”. A home to people from all walks of life, Mumbai has India’s largest film industry, some of Asia’s biggest slums as well as the world’s most expensive houses. 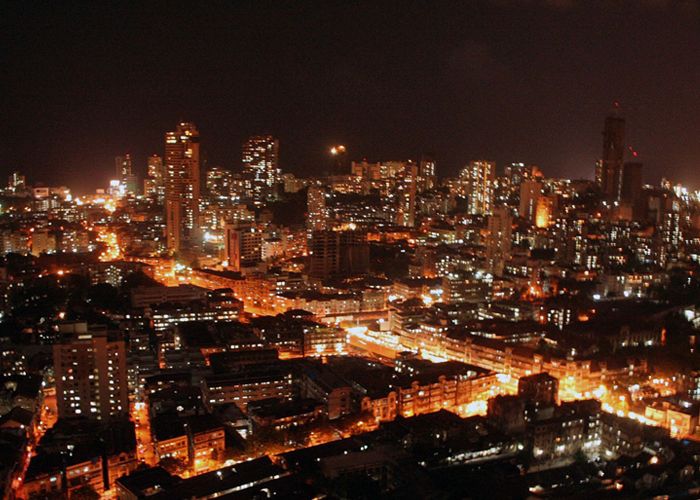 The city that never sleeps... 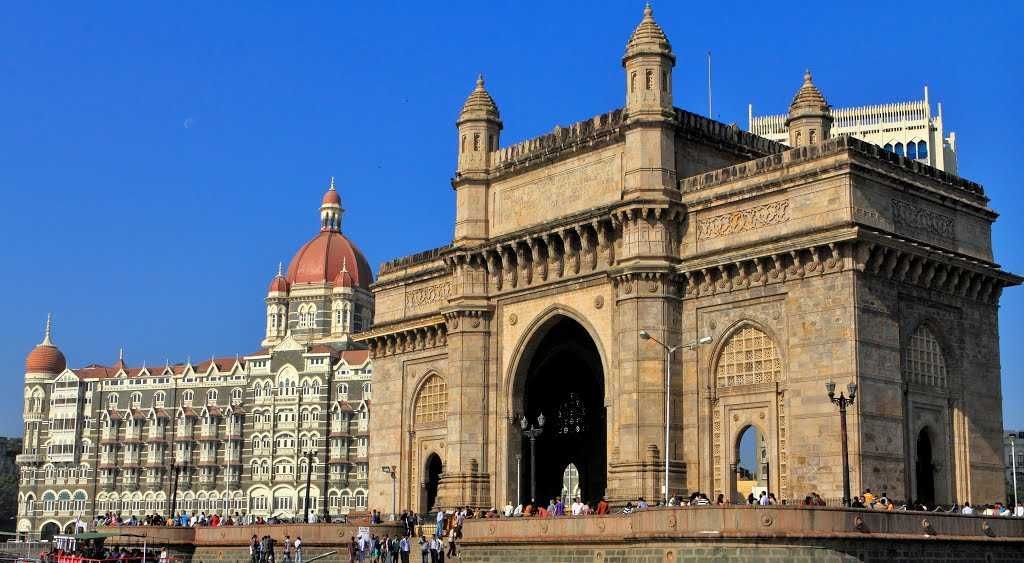 ...also contains some of the grandest colonial-era architecture on the planet 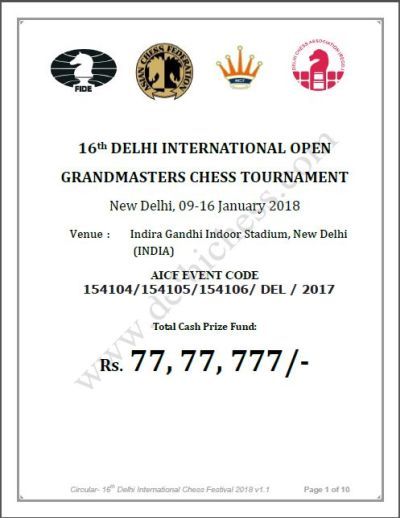 Delhi, India's capital city, is also one of the best places to experience the country's culture. Inhabited since the 6th century BC, the city has witnessed the reigns of several dynasties and been annexed, destroyed and rebuilt multiple times. Thanks to its rich history, lots of historical monuments are scattered all around the city. This year again, Delhi is about to witness some gruesome battles; but thankfully, those battles would only be taking place over chess boards. 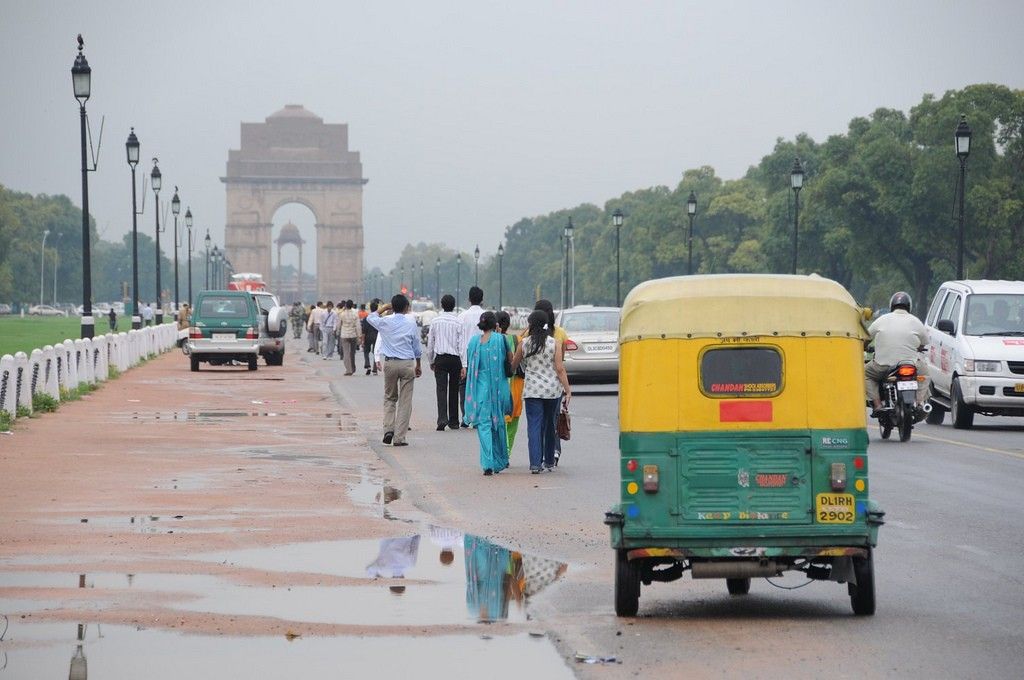 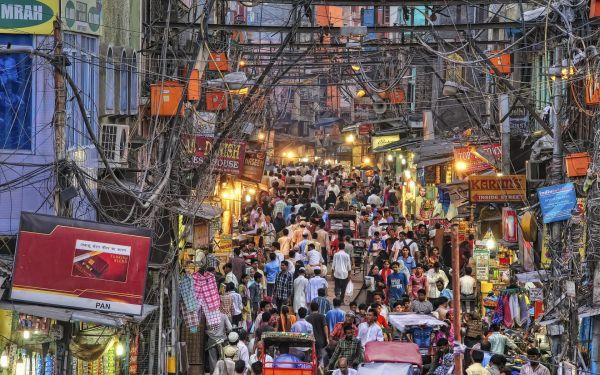 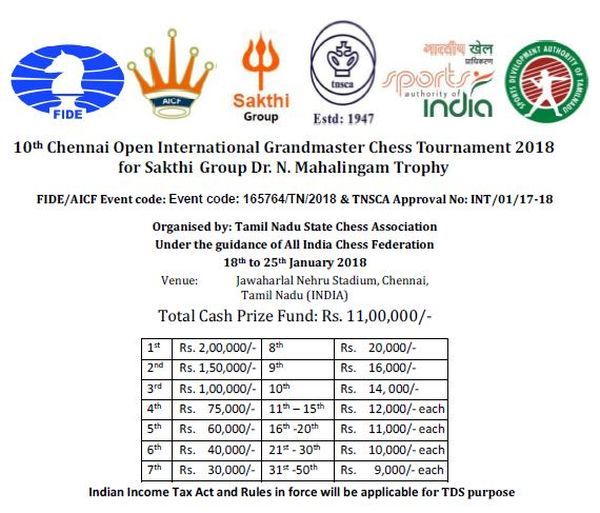 Besides being the hometown of Viswanathan Anand, Chennai is sure to pique the interest of any chess player with its bustling chess culture. The city boasts of some of the oldest chess clubs in the country,  some of which are almost a century old! Another place you might want to visit is the Emmanuel Chess Club (previously known as Tal Chess Club), the place where Anand practiced as a kid. What could be a better way to end your trip than exploring the city and its rich chess culture! 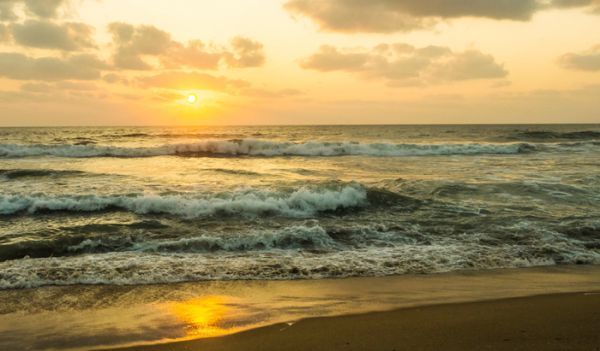 If you'd like to get away from all the chess for a while, taking a walk along the Marina beach is something you might want to consider

As you can see, these four tournaments are excellently planned by the All India Chess Federation. After every event, you have one day in between to reach the next destination. Flights would be the best way to travel between these destinations and for that you always have ChessBase India Power.

There is no better way to cover a huge country like India! Mumbai in the west, Delhi in the north, Bhopal in Centre and Chennai in South. Yes, east is the only place left but later in the year we would hold Bhubaneshwar open, which you can visit and cover that as well!

This is an ideal opportunity for foreign players to visit our country, win some prize money and compete with the best in India. If you are interested to play, do write to IM Vishal Sareen at delhiinternationalchess2014@gmail.com. There are also attractive conditions for foreign titled players.

1. For All Four tournaments: The organisers will take care of air-ticket from home, local air/train tickets and full board accommodation on a double-sharing basis, pocket money 200 USD.

3. For two tournaments: USD 500 for travel costs, all local air/train tickets, full board on double sharing.

4. For one tournament: 300 USD for travel cost, full board on double sharing basis.