The piece drop incident at MCL 2016

A few days ago at the MCL 2016 we had a piece drop incident in a blitz game. Abhijeet Gupta who was completely winning the game dropped his queen and pressed the clock. Sethuraman, his opponent, was alert and claimed a win. While Gupta accepted the defeat graciously, things started to heat up when people on the social media began to attack Sethuraman. ACP President Emil Sutovsky wrote about the incident, which led Sethu to write a long post in his defence. We bring you the events in the order that they transpired along with some very interesting blitz videos.

In the eliminator one of the Maharashtra Chess League 2016 Pune TruMasters took on Mumbai Movers. The winner would qualify to play the semi-finals while the loser would be ousted from the tournament. The normal match of six boards ended in a draw of 3-3. The winner was to be decided by an armageddon. Each team had to send one gladiator to fight it out while the crowd would enjoy the spectacle to the fullest.

Mumbai Movers sent in GM Abhijeet Gupta while Pune TruMasters went ahead with S.P. Sethuraman. Abhijeet won the toss and decided to go with the white pieces. This meant that he had five minutes as compared to Sethuraman's four but a draw meant that Black goes through. 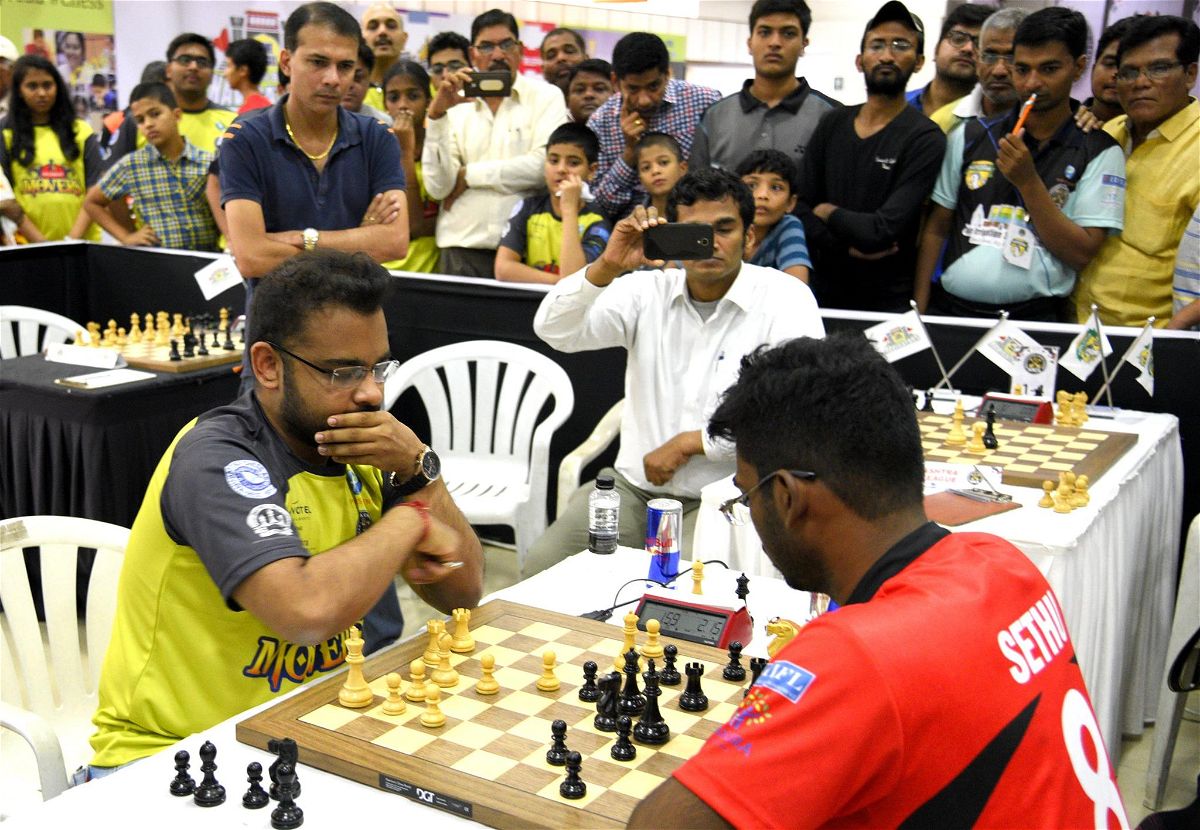 Did Sethuraman resign? No, the result shows 0-1. Did Abhijeet Gupta lose on time? Definitely not! At the end of the game White had one minute 23 seconds as compared to Black's 42 seconds. So if someone was better on time it was white. So what was the reason that led to Abhijeet's loss. 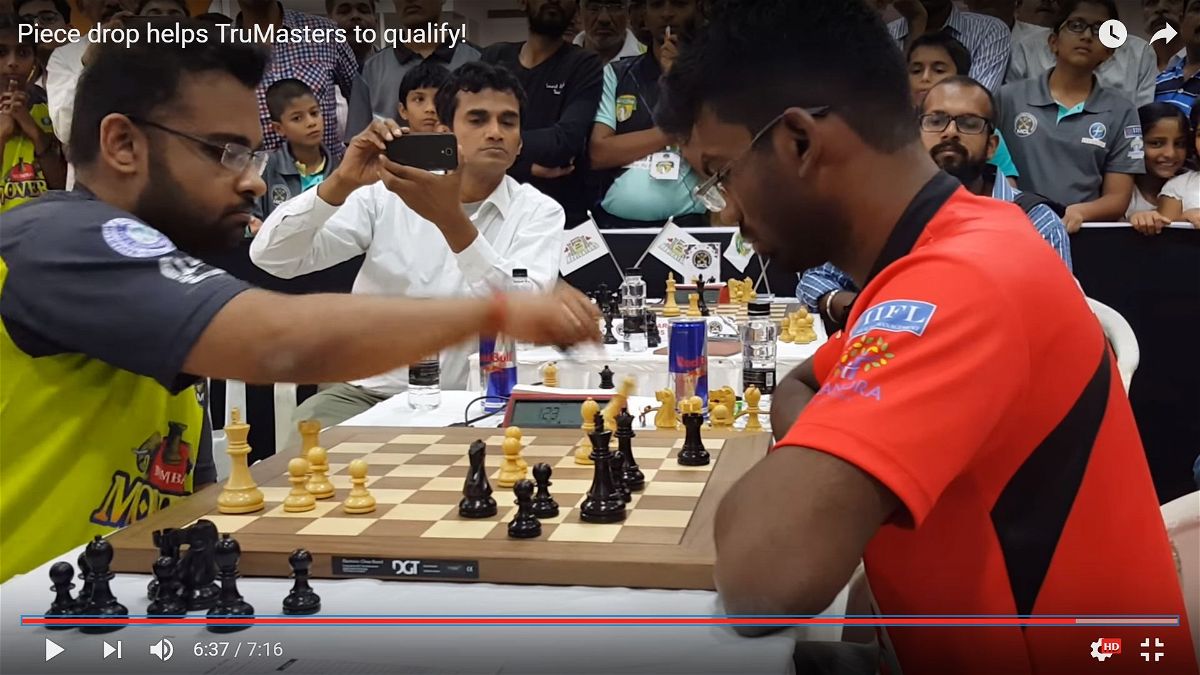 Look carefully, Abhijeet has just made his move 46.Qxa6. and the white queen is not steady 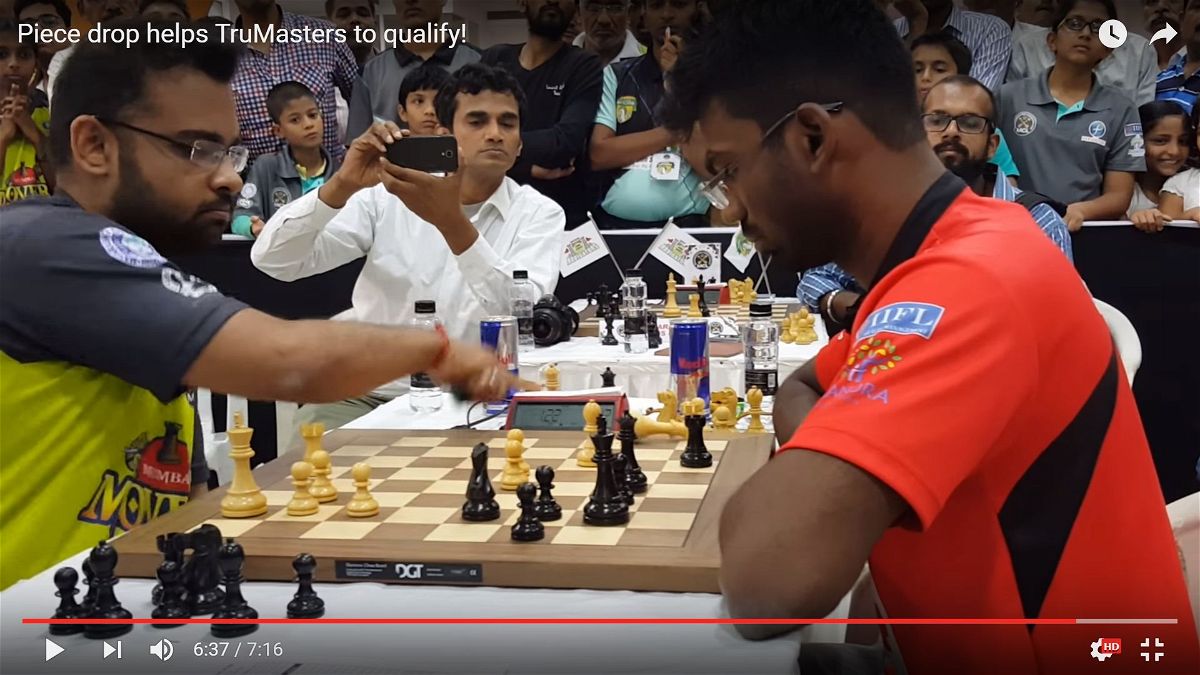 And just as he has pressed the clock, the queen has fallen
In Blitz, if you were to drop a piece on the board and pressed the clock, which means that you didn't set it back again in your own time, then it is a loss. This rule is not applied in every tournament. However, it was applicable in the Maharashtra Chess League 2016. Sethuraman claimed that the piece had fallen and was awarded the full point.
Watch the entire video in HD taken by me using my Samsung Note 5. It shows all the events taking place right from the start until the end in great clarity. The piece drop incident occurs at 6 minutes 35 seconds.
Sethuraman had claimed the win according to the rules that had been discussed before the start of the event in the player's meet. Abhijeet Gupta showed some high class temperament by taking the defeat graciously. So there were no real controversies. Things started to heat up when the ACP President Emil Sutovsky, whose posts are followed by thousands of players all over the world, wrote about this incident.
This is what Emil had to say:
"Let us talk about an important problem - and in the age of ever-decreasing time controls it becomes more important than ever. Have a look at this rather heart-breaking video (refer to the posted above). Playoff stage of the Indian Team Championship has reached the Armageddon game between the leaders of the teams, grandmasters Abhijeet Gupta and Sethuraman SP. GM Gupta is in full control from the very beginning, he controls both his emotions and the situation on the board. GM Sethuraman is visibly nervous, shaking the table and pressing clocks too strong on several occasions. That doesn't seem to help, as Gupta is firmly on his way to a decisive win. Suddenly, on 6:35 something unexpected happens... Sethuraman rightfully claims a win and awarded one. Gupta takes it classy, but his team is out.

Now, don't blame Sethuraman for bad sportsmanship - he was absolutely in his right, claiming a win, but I see a very important problem here. Series of minor fouls - and I am talking not about this particular game, but in general (and not only blitz!) - remain unpunished. Shaking the table, banging the clock, placing the pieces between the squares, covering the 25% of the board by your head and body...all these are rarely noticed by the arbiter. There are players who are extremely nervous throughout an entire game, and playing them is very uncomfortable.

There are players, who start misbehaving only being short of time, but this is a poor excuse. A player who behaves like that doesn't even get a warning, although his opponent is seriously irritated. I know what I'm talking about - being easily irritated by an opponent, I also seem to forget regularly about proper manners, once entering a time-trouble phase... As it is now, one can do almost anything, as long as it is not specifically restricted - and arbiters would never do anything.
Whereas you can lose the game for some really minor sin.
Something has to be done here."

Sutovsky's post drew a lot of comments from the chess community all over the world. You can read them over here.

By this point Sethuraman, tired of people blaming him, decided to write on Facebook as well. This is what he had to say (we have embedded videos, wherever Sethuraman has given the link):

"After some comments and post about my Armageddon game against Abhijeet Gupta, few days back at MCL knockouts, I wanted to clarify a few things. It was not my intention to win a game the way it happened. It hurts to see some people commenting on my lack of sportsmanship. I simply don't understand. I just followed the rule what it is meant to be and I can cite many examples from the elite level like Nakamura who claimed a win against Topalov in the recent blitz 2016 at Paris for promotion of pawn to e1.


So was he wrong too in following the rule. Then why to make illegal claims. It's simply the way they are. The same day in the same tournament Srinath Narayanan claimed a win in the similar way agaisnt Adhiban Baskaran


In a Blitz type of game a player should move the pieces correctly without dropping down. That is the basic discipline . Every second is crucial in this type of game. Some times even one second decides the game since it's an Armageddon. Secondly, intention of the player can not be seen by the opponent when he is playing with full concentration and tension. Some times, some players intentionally drop the pieces to confuse the opponents. That is why the rules play an important role to decide. For example, look at the chaos which happened in an armageddon game between Kramnik and Aronian.


Players are not responsible for any such happenings or decisions. My opponent Abhijeet Gupta played well and was calm and composed and I felt sorry for him. Players can only claim. Arbiters should take a decision by considering each and every factor. I see some comments from Mr Emil Sutovsky that I was nervous, shaking the table and pressing clocks too strong on several occasions. If you closely look at the video, I pressed the clock may be slightly hard but felt it was normal like in any blitz tournament. Look at the above video of World Champion Kramnik for instance and there are several other blitz videos from great players where you can compare how strong it was. And I was also not shaking the table in any instance, if at all it was distracting my opponent, he would have complained. People generally get nervous if you look at any blitz video even from elite tournaments and you cannot simply control human emotions. Some people are good at it, while some are not. None of them thinks to irritate his opponent by doing such things and I am never such a person. It is Fide who should be making perfect rules in this regard and the player is not responsible for claiming his rights."

You can read Sethuraman's entire post here and also the numerous comments that it attracted. One of the most important was by his opponent - Abhijeet Gupta. This is what Abhijeet said:

"I feel that nobody should blame Sethuraman for claiming here. He was within his rights to do it. All we should focus is how to change or rectify this rule. Another thing I would like to say is Sethuraman is a pure gentleman and people should stop judging him for such a small incident. As he said earlier it is FIDE whose job is to make the perfect rules not player's responsibility whether to claim it or not."

From the above discussion, we can conclude two things:

1. Sethuraman was not wrong in claiming a win because he did so by the rules.

2. FIDE as well as the tournament organizers should be more careful when it comes to laying down such rules. It can affect the outcome of an entire event.

Let us know what your opinion is by writing in the comments section below.