Philosophical side of chess III: David vs Goliath

In the third round of the Mayor's Cup 2009, 19-year-old Sagar Shah was pitted against the strong Russian grandmaster Vladimir Belov. A product of the Russian chess school, Belov was stronger than the Mumbai boy by nearly 400 Elo points. Sagar's confidence had reached the lowest of levels. He left for the round from his home with a mentality of already having lost the game. On the way to the playing hall, a miracle occurred! Suddenly the boy was rejuvenated! Check out the article to see what transpired and what was the result of the encounter!

I get up at 6 in the morning! I am playing the Mayors Cup international chess tournament 2009 which is held in my hometown, Mumbai.
The game is to begin at 10 a.m. but I am not able to sleep.

The Reason: My third round opponent is the extremely strong Russian GM Vladimir Belov 2628. While preparing against him on the previous day, I saw that he hardly had lost a game to players rated lower than him. After all to reach a rating of 2628 you have to be consistent. With my paltry rating of 2268, I had mentally given up the hopes of beating my esteemed opponent. And when I came to know that he had been a second of the super famous Alexander Grischuk, that was the last nail in the coffin!

How can a player who is just another bloke in the sun (i.e myself) challenge a product of Russian chess school? More importantly what quality did I possess that would be superior to his? His opening knowledge would definitely be world class as he had worked for Grischuk. He must definitely have seen more middlegame patterns, and well, even a 12-year- old Russian boy would play better endgame than me! I left my home with this “I give up” attitude. It was definitely a David vs Goliath encounter! 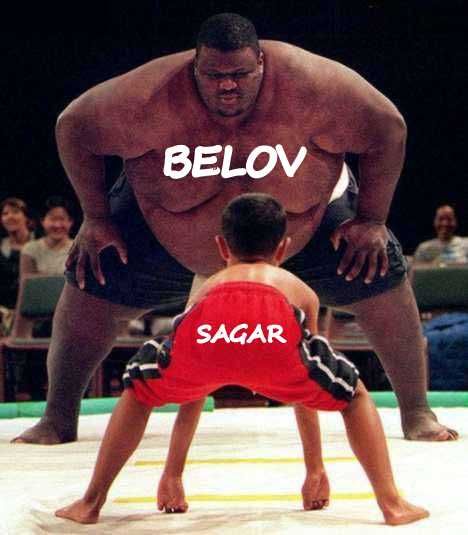 I reached the railway station to catch the train for the tournament hall. And while I was on the bridge I saw the train approaching the platform. I made a dash to catch! My eyesight was fixed on the bogey as it came near.

Thoughts like, “I would be late for the game if I didn’t catch the train, a 10 minute deficit against Belov is like rubbing salt to the wounds etc. etc.!” started to bombard my mind.

BAMMM!In my haste I hadn’t noticed a stone that was lying in my path and I fell. It wasn’t a bad fall, I got up instantly but I had lost enough time to not be able to catch the train! I waited for the next train to come. While I was waiting, I tried to think about what had just happened.

There were two forces interacting in the situation when I wanted to catch the train: The train and Myself.
I had absolutely no control on how the train would behave. But I had full control on my body, on my legs and on my speed. I should have been focusing on how I could maximize my running speed, on how I could have dodged the obstacles in my path and given my best. But what I did was to watch the train. Secretly I was hoping that my gaze would be powerful enough to slow it down!

Add to that my mind which was producing negative emotions. How in the universe was I to focus on the job at hand. As I reached the tournament hall, I had formulated an important hypothesis:

In such a scenario it is important to completely block out the forces which are not in our control and focus with all the energy on what is in our hands. Because if we give our best and still can’t achieve the job, you need not be upset, as there was nothing more that you could have done about it. But what we definitely should not be doing is to waste our precious energy on things that we cannot influence.(like the train)

Thus the Moral is: Train your mind to always focus and give 100% on the things that you can influence. If you do that you will never feel guilty that you didn’t give your best!

EPILOGUE:
As for my game with Vladimir Belov, I reached my board a few minutes late but I was calm. My mind was focused at the work on hand, to make the best moves! It was as if I didn’t even care who was sitting opposite me. We played a hard fought game, And Believe it or not , after four hours I was able to beat him!

Since that day David has grown and with that so has his confidence and self belief!

Part I of the Philosophical side of chess: Leave your comfort zone

Part II of the philosophical side of chess: Knights and Bishops