Last day of the 2nd IIFLW International in videos

The last day of the 2nd IIFLW tournament was a grand affair. Along with exciting games, the presence of Vishy Anand livened up the proceedings. Pranav. V won the under-13 section and Adam Tukhaev was at the top in the open. In this report we recap the day in videos with Pranav (he analyzes his crucial last game in-depth), Pranav's father, Adam Tukhaev, press conference with Vishy Anand, interviews of Karan and Shilpa Bhagat and the buzzing closing ceremony. Don't miss out the video of Anand being given a back massage! 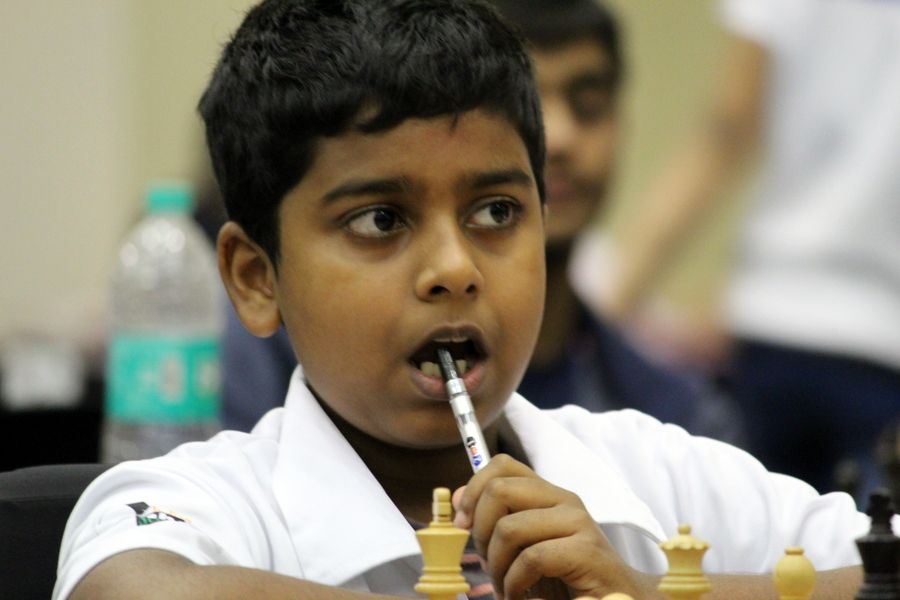 Pranav V was leading by a half point margin in the under-13 section with 7.0/8

The only way that Pranav could let the title slip was by losing. A draw was enough for him to be the undisputed champion. He came extremely close to losing, as we explained in our previous report. This is how the pairing looked before the last round:

Pranav drew his exciting game against Manish Anto. He came back from the brink of defeat to win the title. Meanwhile Sankarsha Shelke, D.Gukesh, Mohammad Fahad Rahman and Aditya Samant won their games to finsh on 7.5/9, along with Manish Anto Cristiano.

After the final round, we caught up with Pranav and discussed the final round with him. In this 20 minutes video, you get a glimpse of a future champion. Through the way he explains certain nuances, or explains his thought process it is clear that Pranav has huge amounts of talent. And he is just 10 years 2 months old. The future is in safe hands.

Pranav analyzes his last round game with Sagar 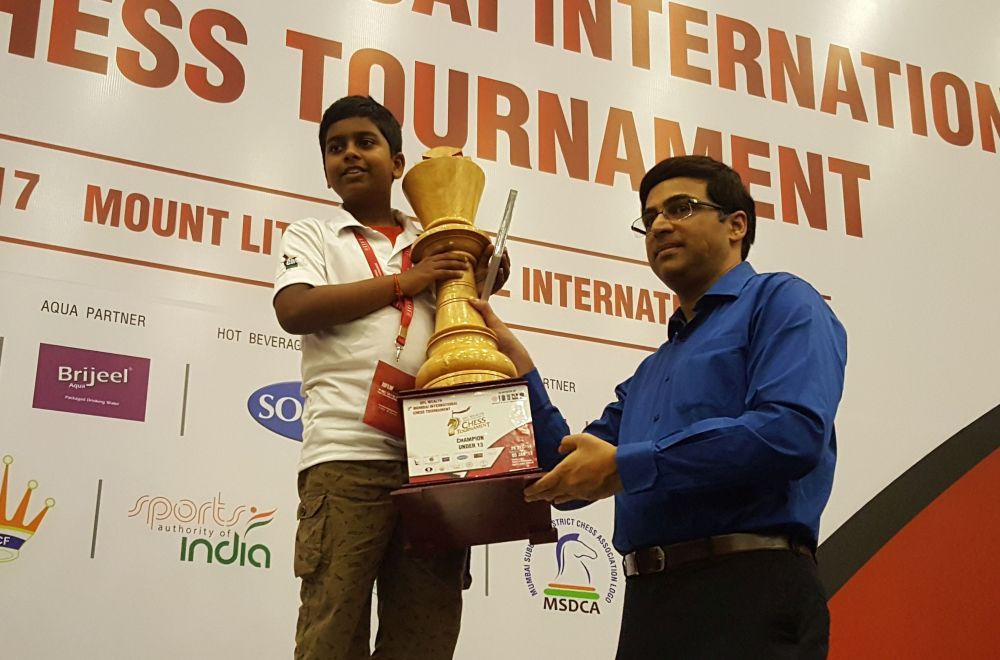 Winning this huge trophy at the hands of the Anand is a sweet feeling! Along with it, he took back home Rs.1,50,000 and a DVD of Vishy Anand's My career (1 & 2) signed by Anand. 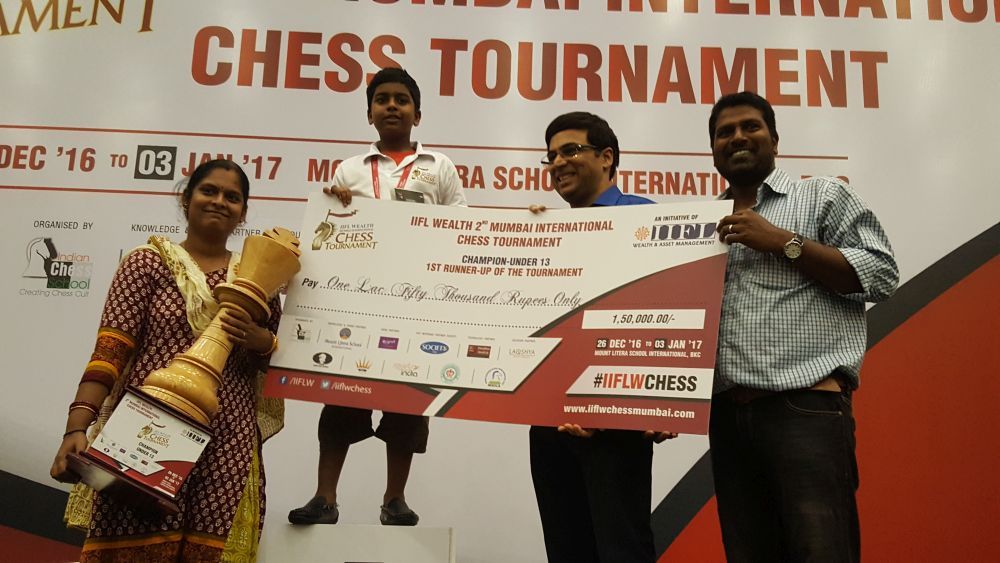 When a young kid is progressing, a very huge role is played by the parents. When it comes to Pranav, his father seems to have got all the basics right. We caught up with Venkatesh who speaks about his role during the tournament, how he would try to stay away from the stress of the event and what are his future plans. 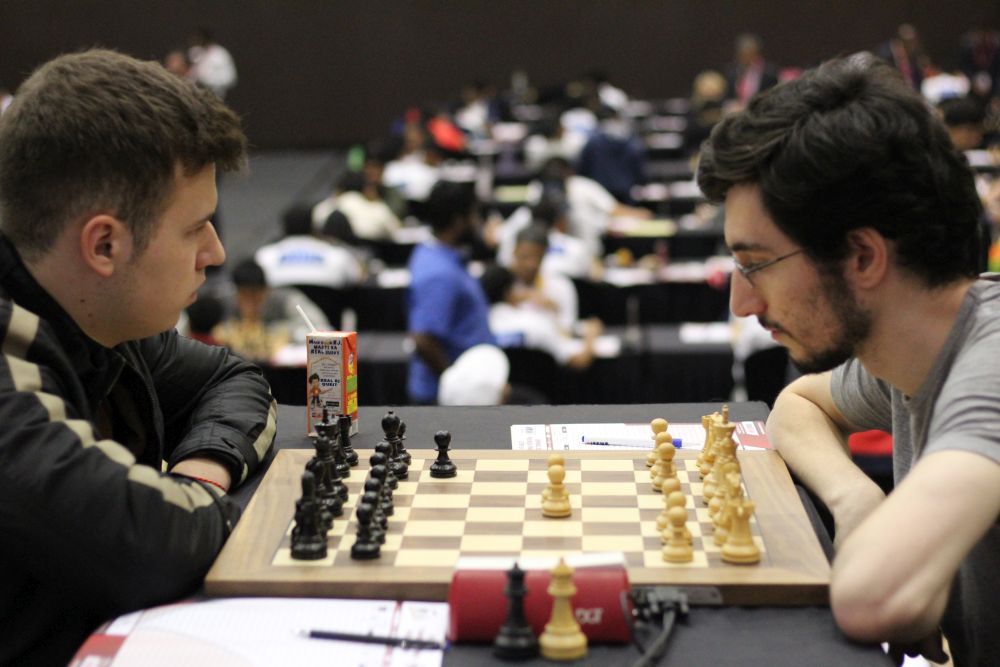 The other two games between Diptayan Ghosh versus Rahul Sangma and Valeriy Neverov against Vadim Malakhatko ended in draws. 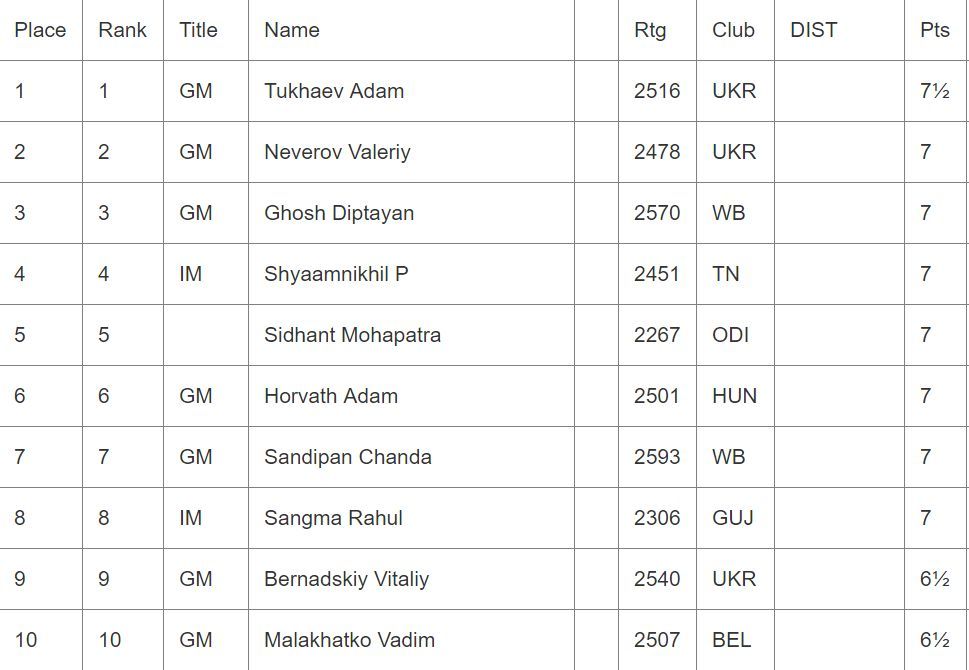 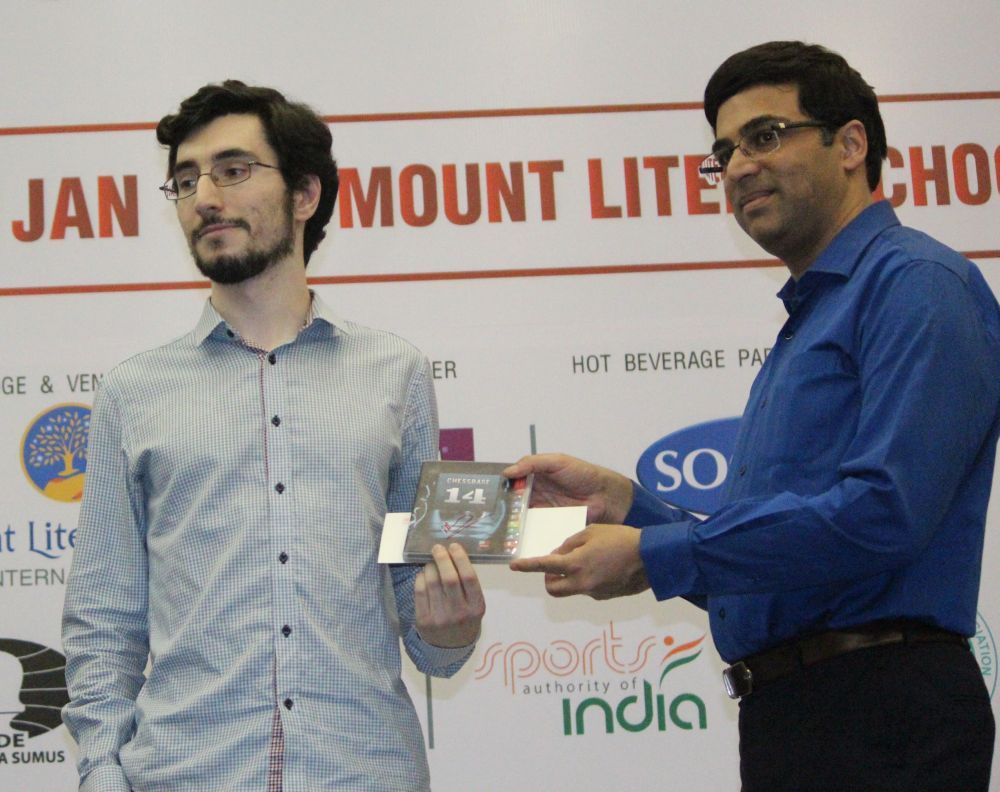 The prize ceremony was in progress but Adam was kind enough to speak to us about his experience of winning the event, what it means to play in India, and the golden question - are Indian players under-rated?

In conversation with GM Adam Tukhaev
Sandipan Chanda was the top seed. He scored 7.0/9, finishing seventh. It's always interesting to get insights of world class players after an event comes to an end. Of course, we ask him about his tournament, but also about the London System, an opening which he plays quite regularly.
When I was young the London System was used for a draw, but now for a win!
The special thing about the IIFLW tournament was that it was filled with all categories of players. Some were playing the event seriously, some for fun, some just for a break from routine life. A common bond of love for the game united all of them. We spoke with one such player who loves the game immensely. 56-year-old Bhagyashree Thipsay, wife of GM Pravin Thipsay is a legend. She doesn't play many tournaments recently due to various commitments. But for the IIFLW tournament, she made all sorts of adjustments, had to even miss a game to play the event. Just for the love of chess!
Bhagyashree Thipsay speaks about the challenges of play chess at the age of 56 years 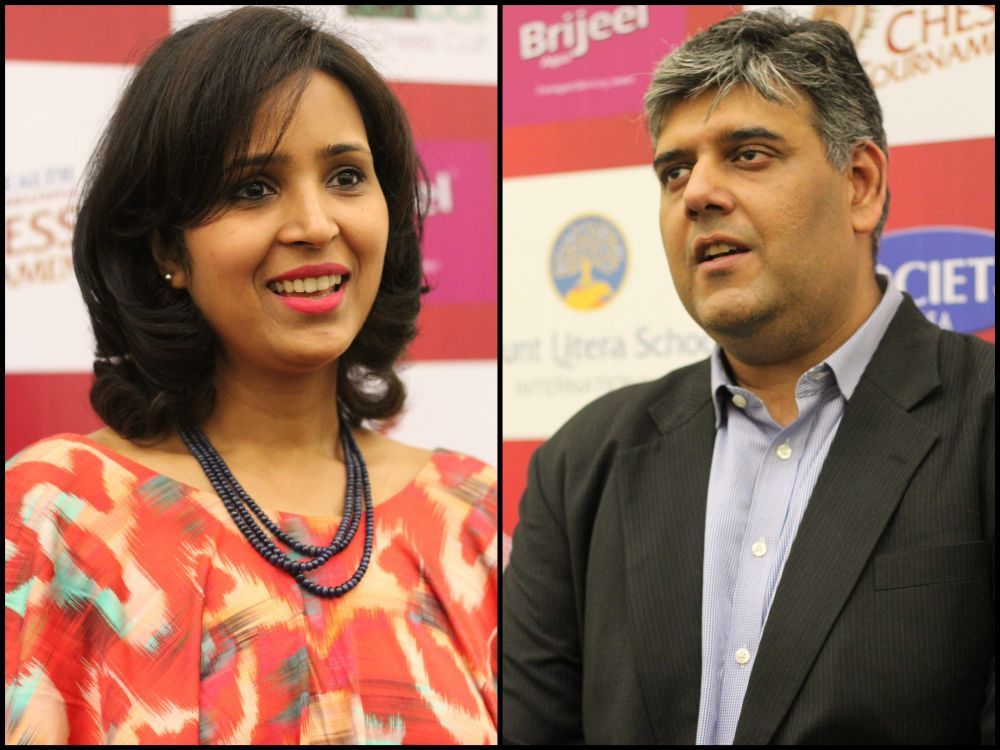 Connoisseurs of the game: Shilpa and Karan Bhagat (Photo by Amruta Mokal)
The chess fraternity should extend huge gratitude to Karan and Shilpa Bhagat. The two have put in huge amount of efforts to ensure that this event becomes one of the biggest and well-organized event in the Indian circuit. And according to Karan, this is just the beginning. They plan to bring chess to the grassroots and make it immensely popular not only in the city of Mumbai but also in the entire country.
Shilpa Bhagat speaks about how IIFLW got associated with the game of chess
The way Karan Bhagat has expanded IIFLW is truly astounding. The game of chess needs something similar.

Vishy Anand arrived at the Mount Litera school at 5.30 p.m. The entire building was buzzing with excitement as the five-time World Champion announced his presence. First up was a press conference with 20-odd reporters who were waiting for him. 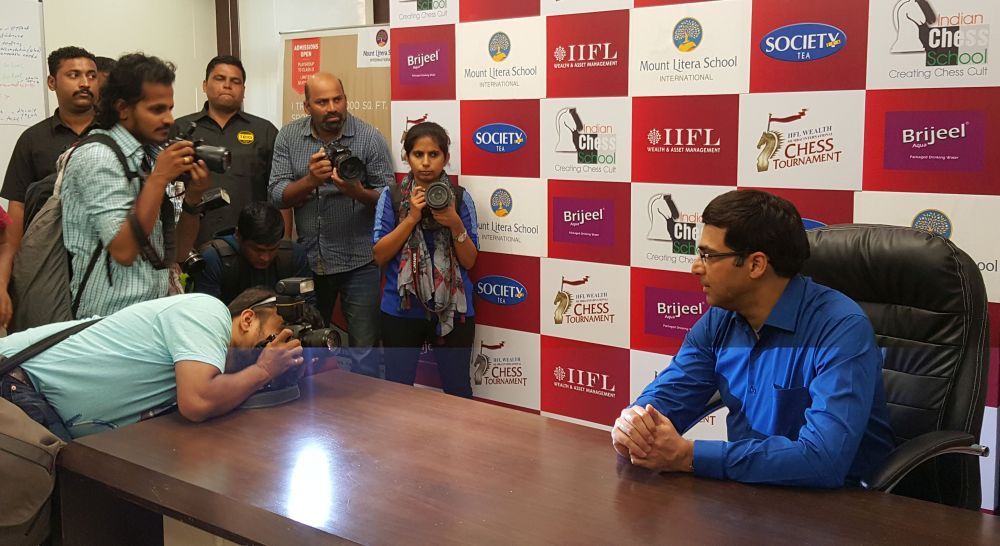 In this 10-minute press conference Anand speaks about the year 2016, World Rapid and blitz, his plans for the next year, talents like Praggnanandhaa and Vidit Gujrathi, his second Gajewski and how it feels to travel to tournaments without Aruna. Don't miss this: 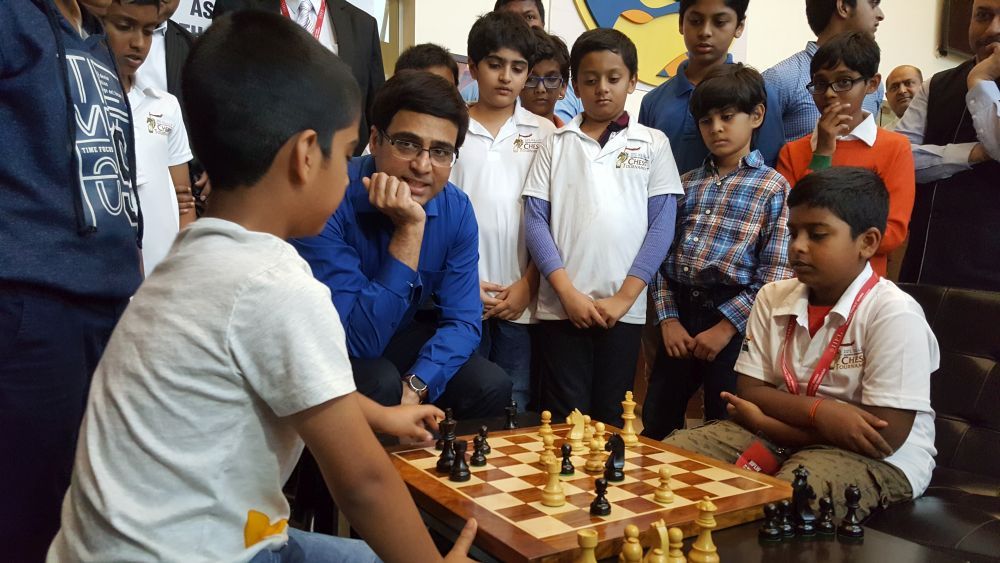 The best spectator that one can have! Pranav V. plays against Kush Bhagat (son of Karan and Shilpa Bhagat) as Anand kibitzes the game.

A simul against Anand took place after that. Due to lack of time 8-9 nine games couldn't be completed out of the 20 boards. As Anand explained, "He was happy that he wasn't losing in any game!" 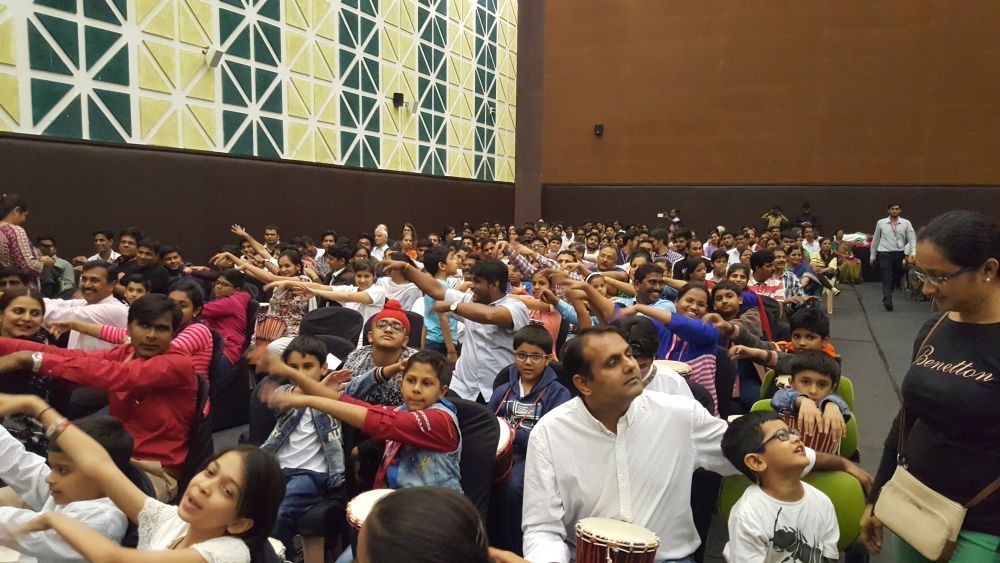 An unbelievably packed closing ceremony greeted Anand! And the drum cafe lightened up the atmosphere!
A very nice innovation by the organizers was inviting the drum cafe to the closing ceremony. It's a music band and their concept is pretty unique. They place drums in the audience and make everyone in the crowd participate in the festivities. As you can see from the picture above, not only the kids but also the adults were having a great time. We have recorded the entire 15-minute show by drum cafe. It's like attending some sort of a concert. Don't miss it. In case you do not have that much time, fast forward to 11 minutes 20 seconds to see Anand getting and giving a massage!
The entire footage of the fun at the closing ceremony! 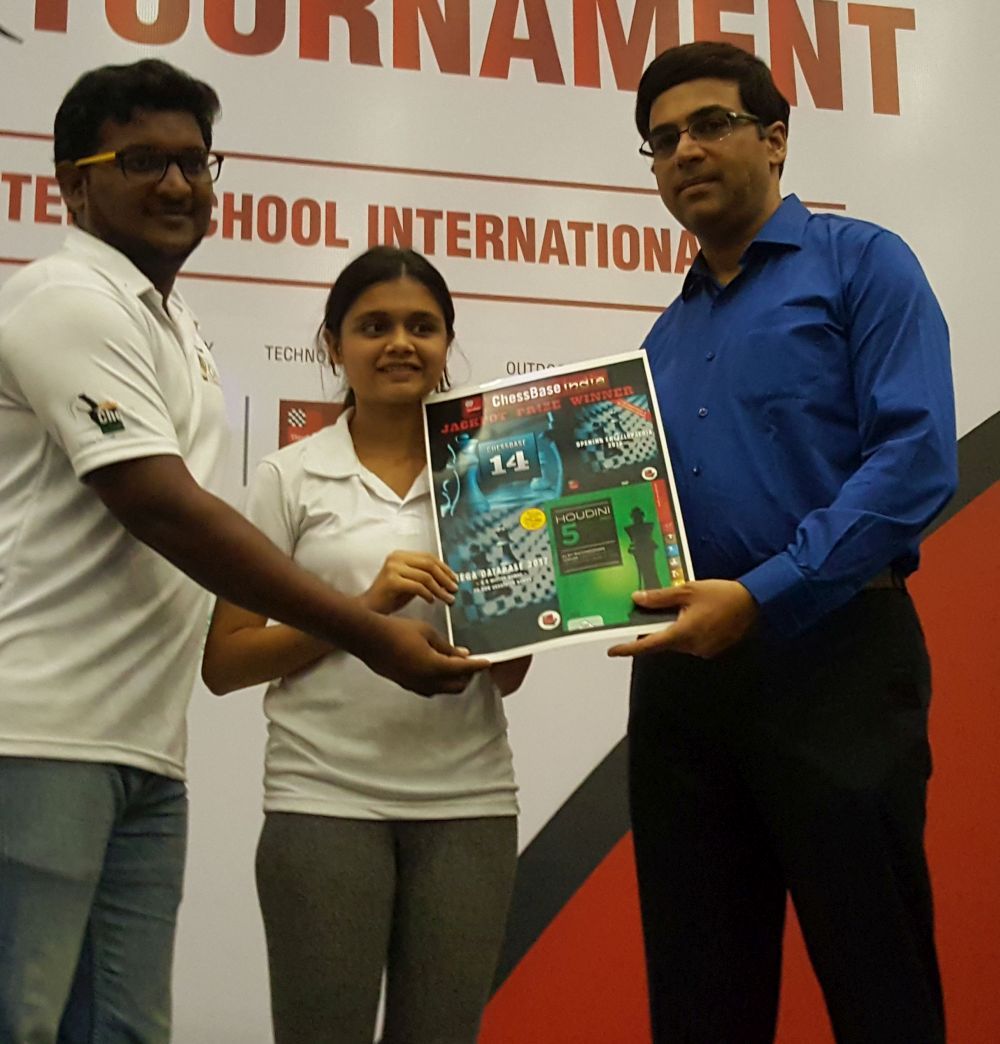 The Jackpot winners: Vishwa Shah and N. Surendran. The entire prize consisting of ChessBase 14, Mega Database 2017, Houdini 5 and Opening Encyclopaedia was worth Rs.14,000. As both Vishwa and Surendran guessed correctly during the fourth round that GM David Alberto would finish 14th at the end of the tournament, they received this prize.
ChessBase India also sponsored the game of the day prize and all the players who participated in the jackpot contest will get a gift coupon from us. 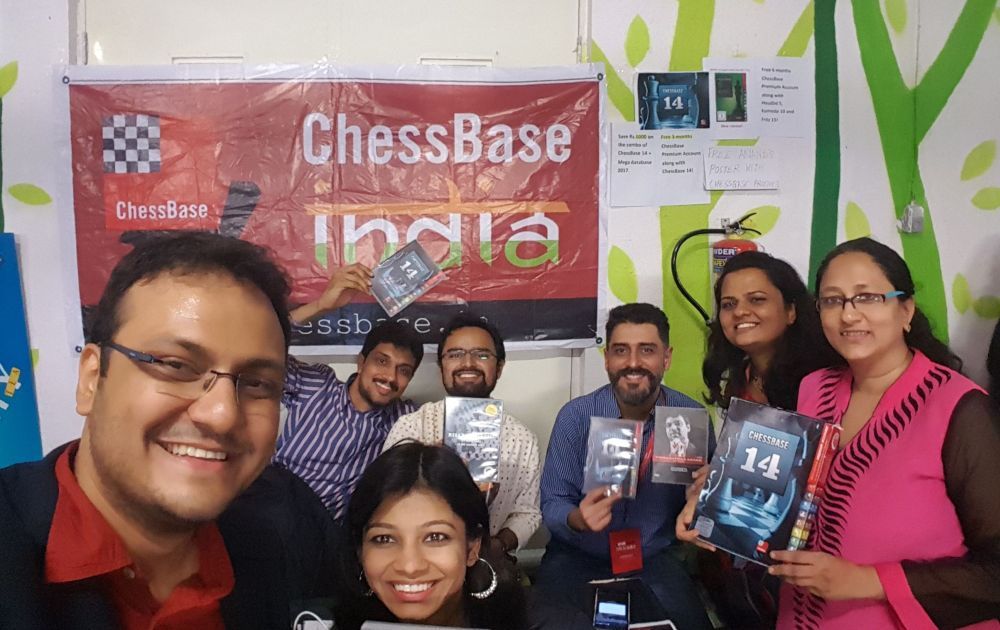 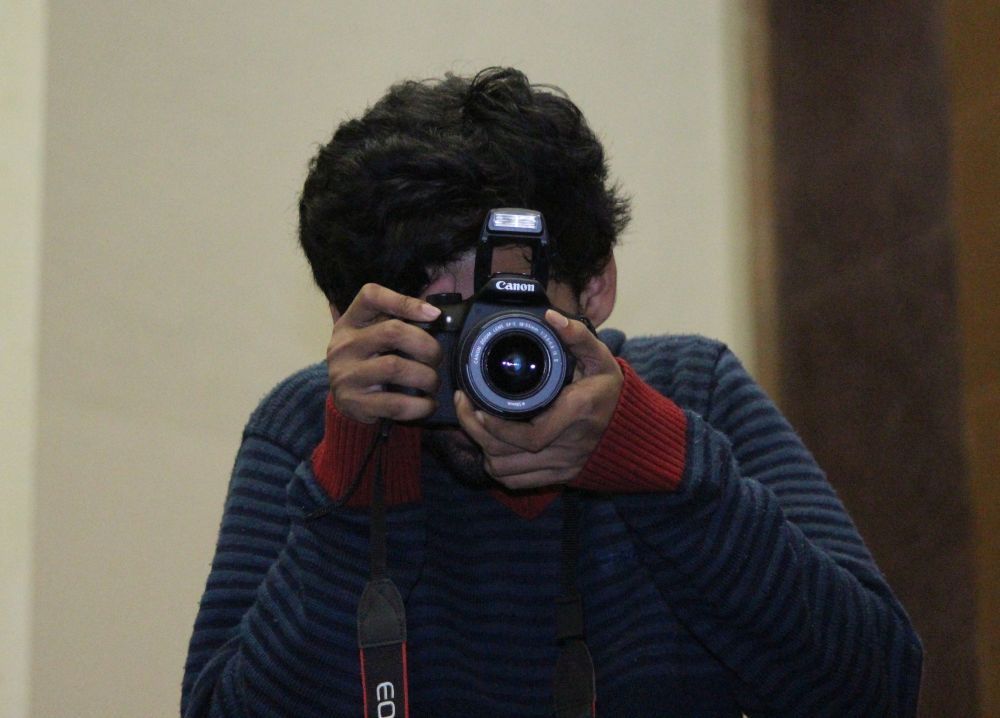 Priydarshan Banjan: Editor of our newspage, and the man who has been working extremely hard at the event by writing beautiful reports, sending press releases to hundreds of periodicals, taking excellent pictures and last but not the least promoting the game of chess! Watch out for his final round-up report.