The art of analyzing your own game

Strong grandmasters often say that you must analyze your own games. While there is no doubt that this is a very useful advice in order to become a better player, very few people actually tell you how to analyze your game. If you are one of those players who are struggling to figure out what is the best way to analyze your own games, do not worry! Help is at hand. Himanshu Sharma is one of the strongest International Masters in India. He became a GM elect, with a career high rating of 2471, without any formal training. He is a self made chess player. There was one thing that Himanshu knew better than his peers - the art of analysis. In this article he shares his secret recipe with you with the help of a beautifully annotated game. We also take this opportunity to introduce the new PGN replayer to you.

Himanshu Sharma is an International Master from Haryana. In September 2009 he had a rating of 2471. This is just an indication of how strong he was and still is. One worrying detail about Himanshu's chess career was the fact that after achieving his IM title in 2006, he couldn't score a GM norm until 2014. However, everyone knew that he was a class act and getting the norms was only a matter of time. He scored his first norm in June 2014 in Mumbai Mayor's cup and by June 2016, he was already a GM elect. We all are waiting for Himanshu to reach the magical 2500 figure so that he becomes the next grandmaster of India. 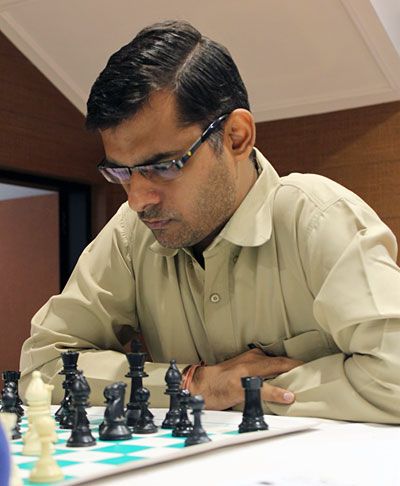 There was a period in Indian chess where Himanshu won one rating tournament after another. If Himanshu was present at the event, there were high chances that others would have to fight for the second spot. And believe it or not, he reached the rating of 2471 by just playing in India. So the natural question is: what is it that makes him such a strong player?

It is definitely not opening preparation. A small chat with Himanshu is enough to convince you that opening is not his forte. After he won a game I once told Himanshu, "Bahut acha opening khela aapne! Kaha se prepare kiya!" (You played a great opening. Where did you prepare it from?) To which he replied, " Kal tournament mein ek board pe ye opening dekha, socha interesting hai! Kyun na khel lu?" (I saw this opening on some other board yesterday and I thought to myself why shouldn't I try it today!)

If there is one thing that Himanshu truly excels in it is the art of analysis. Give him any position and he will try to dissect it in the best possible manner. And he doesn't really believe in making use of engines. He tries to think with his own mind and spends a lot of time analysing different possibilities. Once he asked me, "Yaar tum itni saari books padh kaise lete ho? Mein do mahine se Advanced Chess Tactics padh raha hoon aur abhi tak sirf do chapter khatm hue hai!" (How do you read so many books in such less time? I am reading Advanced Chess Tactics since last two months and have only been able to complete two chapters!) That's how meticulous he is!

After winning a rating tournament in India recently, I asked Himanshu to send his favourite game from the event. I thought it would be an ideal chance for the readers of ChessBase India to get a glimpse of how top level players analyze and annotate. After a few days I received a game with the following opening moves. 1.e4 e6 2.d4 d5 3.exd5 exd5. " Oh my God! The boring exchange French I said to myself!" However, as I began to read Himanshu's annotations, it was so richly analyzed and filled with so many instructive points that I spent nearly an hour going through the game! And now, dear readers, I would like to share this analysis with you.

So how can you gain maximally from this game that Himanshu has annotated. Normally you could just play over the moves and comments and learn quite a lot. However, I would recommend that you get your chess board and pieces out and set them up and then play over the analysis on the chess board. In this way you will be able to retain much more than by just pressing the forward arrow key on your keyboard.

But if you are an extremely hard working chess player who is really desperate to improve at the game, then here's the way to really make the best use of this article. Below is the unannotated version of Himanshu's game. Save it to your computer and analyze it on your own. Spend around an hour with the game and write down your analysis in a book or in ChessBase 13. After that compare your notes to that of Himanshu's and you will understand the difference between your and a GM-elect's thinking process. So here's the unannotated version of the game:

This game is ideal training tool for young students to learn the art of analyzing their own games. One of the things which you will find impressive is the truthfulness with which Himanshu has annotated. He doesn't mind saying that he made mistakes. The other thing is his inquisitiveness. At every point he is curious to know what is the best move in the position - not only for himself but also for his opponent. And lastly he learnt a lot of lessons from this game which he jotted down at the end. This means that he will try and avoid making similar mistakes in his future battles.

The secret is learning the art of analysis.

We thank Himanshu Sharma for sharing his valuable analysis with our readers and we wish him the best for reaching 2500 and becoming India's next grandmaster! May the force be with you, Himanshu!