The first leg of the Grand Chess Tour in Paris was won by Hikaru Nakamura. The second leg will begin from the 17th until the 20th of June in Leuven, Belgium. While this is a super strong tournament, the special Indian interest is ignited by the fact that Vishy Anand will be one of the ten participants. It is a nine round rapid plus an 18 round blitz event. On this page you can not only view Vishy's live game but you can also enjoy the commentary by Yasser Seirawan, Maurice Ashley and others. The live game begins at 15.30 hours IST. Go Vishy!

The greatest chess tournament ever staged in Belgium, Your Next Move Grand Chess Tour, is taking place in the historic Town Hall of Leuven from Friday 17 June to Monday 20 June. The best chess players in the world at the moment will take part in the tournament: World Champion Magnus Carlsen, former World Champions Viswanathan Anand and Vladimir Kramnik, as well as Fabiano Caruana, Anish Giri, Maxime Vachier-Lagrave, Hikaru Nakamura, Aronian Levon, Wesley So and Veselin Topalov.

The players will compete in Rapid chess (9 rounds at 25 mins+10 sec increment) and Blitz Chess (18 rounds of 5 mins+2 seconds increment) tournament during the four days. The prize money for the tournament is $ 150,000 (€ 134,100). Chess fans will be able to enjoy the experience of seeing the greatest players compete live in Leuven or watch the streaming broadcast, complete with grandmaster commentary.

After a successful outing at the Leon Masters, Vishy Anand will now fight it out in Leuven, Belgium against the best players in the world in the second leg of the Grand Chess Tour from the 17th to the 20th of June.

We have set up the live game of Vishy Anand which you can follow with powerful tools like Fritz engine, live book, let's check function and other features. We have also embedded the live commentary. 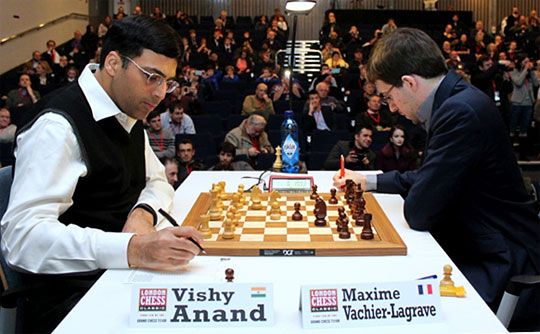 Vishy Anand battles it out with MVL in the last leg of Grand Chess Tour 2015 in London (Photo: Amruta Mokal)

Your Next Move Grand Chess Tour is part of the the Grand Chess Tour 2016, a series of four chess events organized worldwide (Paris - France, Leuven - Belgium, Saint Louis – USA and London - UK). Your Next Move, a non-profit organization and the organizer of the event in Leuven, promotes chess as an educational tool for children and youngsters in Belgium.

The board will be updated as soon as the game begins.

Just add three and a half hours to time given below to get Indian Standard Time (IST).