Chess teaches you a lot of life lessons. Learning chess can help you excel in other fields of life mainly because it teaches you analytical thinking, decision making, taking responsibility etc. We all have heard this, haven't we? How about seeing all of this pan out not just in theory, but real life! The CEO of India's fastest growing agricultural company Akshayakalpa is a FIDE rated chess player, and he is using his lessons derived from chess to fight corruption and empower the farmers of our country. An inspiring tale.

This story was originally published in Hindu by G.T. Sathish

For Shashi Kumar, a post-graduate from Illinois University in the U.S., getting a signature on a form from an official in the Karnataka Department of Industries merely meant putting ink on paper. He met the official, got the signature and returned. “On the way back, I got a call from him. He was furious that I had not paid him a bribe and said he would teach us a lesson when we would approach him again for yet another signature,” says Mr. Kumar.

The official did do what he promised but the lesson Shashi Kumar and his eight partners — techies who started Akshayakalpa Farms and Food — learned was that they wouldn’t budge from the promise they had made to themselves that they will not pay any bribe whatsoever while starting and running their agri-business.

Akshayakalpa Farms and Food today supplies nearly 8,500 litres of organic milk to Bengaluru residents. Some 1,000 litres go towards making milk products. A milk processing plant has been set up on 24 acres of land at Kodihalli in Channarayapatna taluk of Hassan district under the guidance of noted veterinarian Dr. G.N.S. Reddy, who is the chairman of the company. Shashi Kumar is Akshayakalpa’s CEO. Many of the brains behind Akshayakalpa had launched the start-up Stellapps, which provides technological solutions to the dairy industry. 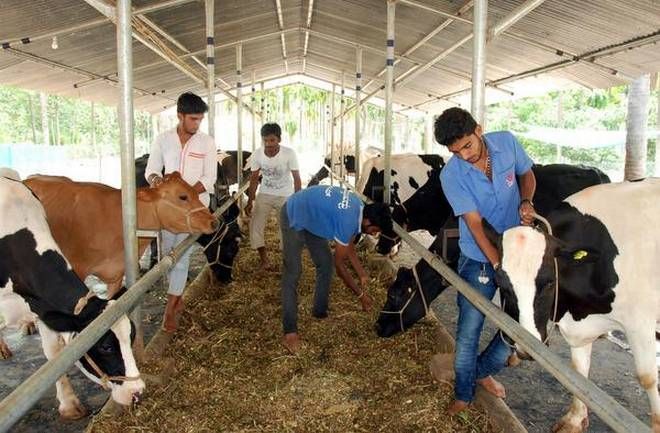 The farm belonging to Krishnamurthy, a farmer at Byadarahalli in Tiptur taluk, who earns Rs.3 lakh per month by selling milk, thanks to Akshayakalpa Farms.   | Photo Credit: Prakash Hassan

From starting up to full functionality, it took Akshayakalpa nearly eight years. If they had greased enough palms, this may have happened in half the time. The techies had to put up with not just delays but harassment, even humiliation at every step. Even today, the company has not been given power supply and they make do with a diesel generator.

The corruption was everywhere, says Mr. Kumar. He calls the single window clearance well-intentioned but a farce in reality. The Udyoga Mitra, the agency, had too many palms to grease, which Akshayakalpa refused to do, says Mr. Kumar.

Among the first steps was purchasing land. The company identified a farm owner who was ready to sell the land. The Deputy Commissioner’s office was approached to change the land use of the farmland. The process involved the offices of Land Survey, District Industries Centre and a couple of others. It took four years for that process to be completed.

Then the Akshayakalpa techies faced difficulty in land registration and obtaining the khata (e-swathu) of the property at the gram panchayat. Meanwhile, they had to take approval for their construction plan from the Directorate of Town and Country Planning where the files took several months to move from one table to another. The company had to operate from a rented building because of the delay of nearly four years. Yet, no bribe was paid.

A few months ago, an official visited the firm and reported an objection, says Syed Ameer Ahmed, who is in-charge of the dairy operations. If the company representative had paid a couple of hundred rupees as a bribe, that may not have happened. “The officer filed the objection and placed it before the senior officer for hearing. We appeared for all the hearings, spending a considerable amount from our pockets on travel, and succeeded in getting the objection quashed,” says Dr. Ahmed.

Their way of coping with bribe demands was to go to higher officials who often sympathised with them. “I was highly inspired by their project and their team. I found them truly committed to the cause of boosting rural economy and, as an officer, I did support them at my level. It is true they had some difficulties in getting clearances from other departments because of corruption in the system. I believe they did not heed, no matter what the pressure was on them,” says a senior Karnataka Administrative Services officer.

Even those who sympathise with them are not sure if they will have the courage to follow Akshayakalpa’s path. “It would be a risky decision to set up an industry without paying a bribe. These investors are die-hard idealists. I have known them for many years. They put in all their savings for the project and struggled all through to make the project operational,” says Ravi Krishna Reddy, Head of the Forum for Building Bribe Free Karnataka.

There has been a payoff, albeit largely social, for all the troubles, assures Shashi Kumar. The milk is collected from 160 farmers from across Channarayapatna, Tiptur, Arasikere and Chikkanayakanahalli taluks. These farmers have set up a dairy farm, with the financial support and technical assistance of the company. The average income of the families stands at ₹48,000 per month. Among them, nine families earn nearly ₹3 lakh each every month.

L.N. Krishnamurthy, a farmer with 5.5 acres of land at Byadarahalli near Tiptur, says: “With 18 cows in my shed, I produce 250 litres of milk every day. My monthly income is nearly ₹3 lakh, an earning a farmer can only dream of,” said Mr. Krishnamurthy.

As many as 29 youths, who had left their villages, to earn their livelihood by driving a taxi in Bengaluru, have returned to their native places to participate in this venture, says Shashi Kumar. Similarly, 11 people with diplomas who were toiling with meagre salaries returned to the villages to earn a handsome income, he adds.

The above story covered in Hindu by G.T. Sathish about how idealists are building up a humongous dairy business without falling for corruption is inspiring. But what is this story doing on ChessBase India? Well, what if we said that the CEO of Akshayakalpa is a FIDE rated chess player! 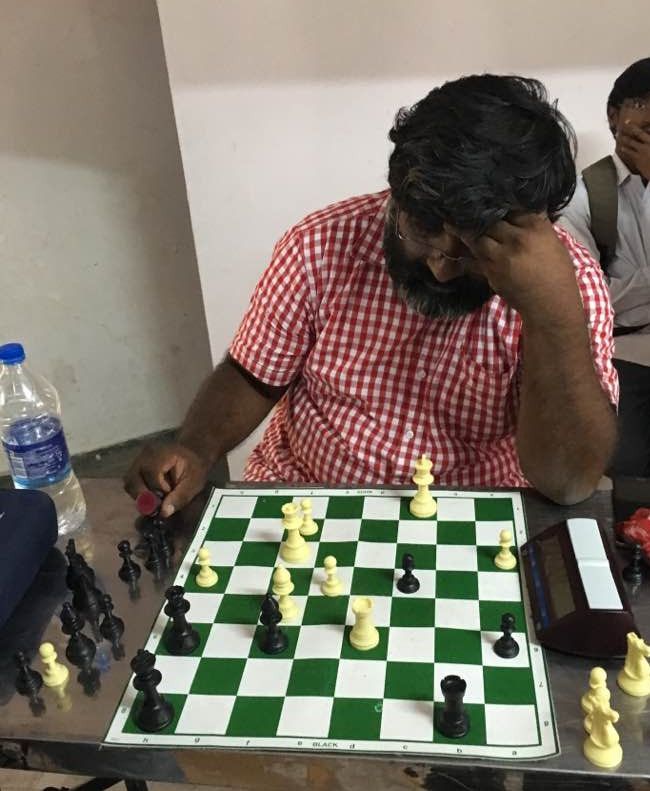 Shashi Kumar, M.Tech in Telecommunication engineering from Illinois Institute of Technology, Chicago, CEO of Akshayakalpa, and a chess fanatic!

I sincerely believe chess teaches great life skills and it is not a co-incidence that me as a CEO of Akshayakalpa started taking pragmatic professional decisions once I took chess seriously from past two years along with my son Shreyas. I have learnt a lot playing chess and meeting people in chess circles. They have been equally motivating and been a great learning opportunity for me, I have learnt intuitiveness of Sushrutha Reddy, work ethics of Sanjay Sindhia, motivation of Gavi Siddayya, professionalism of Prasanna Ranganathappa and G.K. Muralidhara and humane approach to life from Karthik Shetty, child in myself from Hariharan Subramony, and of course meaning of motherly instincts from Shilpa my ever-supporting wife. As I continue to meet, play, discuss in the chess circles, I am learning and evolving as a person.

As a extension worker working with farmers day in day out, clear visualization of possible outcomes from a decision taken in very critical. One key aspect we always enforce with our staff is to visualize what farmer needs if he moves from current situation to next situation. for example - if say his farm moves from say 100 liters of milk production per day to 200 liters of milk production, what he needs to manage and look after 25 cows, what is the fodder security he needs to plan, what technology induction helps him to reduce drudgery in his operations, we have to plan for the future outcome now, else it is just a recipe for failure.

Based on the work we are doing I have realized is to reach a destination there are number of ways and I have started appreciating this more after I left my life in technology industry (which was a predictable life) and started working in farming and agriculture which is not predictable and always surprises you. Keeping your options always open and not committing to one specific approach has always helped me. I have realized that in our journey of transforming Agriculture from a livelihood to wealth creation opportunity for Farmer and meantime provide wholesome food to our loving consumers, I need to enjoy the journey which is bundled with sacrifices, threats, counter threats, emotions, gambits, traps, exploring untrodden paths, being truthful to oneself and grit and determination of swimming against the tide. Shashi Kumar dreams of organizing a chess tournament for more than 5,000 people and making Bangalore a hub for chess akin to what Saint Louis is in USA.

India's biggest Rapid and Blitz tournament ChessMine is going to be held from the 5th to the 7th of August 2017. Akshayakalpa is the first monetary sponsor of the event! We thank Akshayakalpa and Shashi Kumar for their support towards the game of chess.

Show your support by enrolling for the ChessMine rapid and blitz and get a chance to play against some of the top players (Vidit, Sethuraman, Karthikeyan, Aravindh, Nihal and many more) of our country.

Register for the ChessMine Rapid and Blitz