December 01 happens to be the birthday of the first principal of modern endgame's school of witchcraft and wizardry. Akiba Rubinstein was born on this day 136 years back in Poland and went on to become one of the best players in the world. Read his story and know why Anand and Gelfand are so fond of him. A tribute by Aditya Pai. 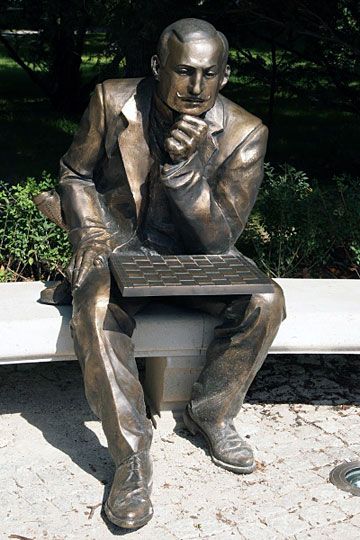 Scrolling through the seemingly endless posts on my Facebook news feed several months ago, I happened to stumble upon this quote of Dylan Thomas; and within a moment, the quote transpired into an image - the image of Akiba Rubinstein.

Indeed he was a beast for his prowess over the chessboard, an angel for his contributions to our beloved game and a madman for what he later became. His was that romantic image of a chess player which inspired filmmakers and storytellers alike. Be it Nabokov's Alexandr Ivanovich Luzhin or the manifold mad characters in Liz Garbus’ Bobby Fischer against the World, all seem to bear some resemblance to Akiba's state post-1932.

But despite the farrago of poverty and mental instability that plagued his chess career, Akiba fought on… although the war had conspired to elbow him off his chance to win the world title; although his schizophrenic phantoms made him hide in corners of tournament halls; he played, he fought.

Akiba was born whilst winter had commenced painting days in dazzling white hues on December 1, 1880 - exactly 136 years ago - to a Jewish family in Stawiski, a town in the north-eastern part of Poland. His life, right from the outset, was poverty stricken. His father had died a few weeks before his birth. Given the ancestry of his family, of Rabbis and Jewish religious scholars, Akiba – as he was expected to – pursued religious studies, to become a Rabbi.

It was on one of those days at the religious school that he stumbled upon two students playing chess. In an instant, he was fascinated. Then on, sidelining his rabbinical studies, Akiba devoted most of his time to studying chess. He was 16 at the time; a relatively late start one might say. But his success was quick and intriguing. Within a few years, Akiba was able to beat every player around. That’s when he got to know about a real chess master, Gersz Salwe, who lived in Lodz. Salwe, at the time, was known to give odds to his opponents and beat them.

Akiba now knew where he would find stronger opposition. But when he arrived in the city, he found himself losing to even those who Salwe would beat giving odds. After several tries, in 1903, he finally tied a match 7-7 against Salwe. Within a year, a rematch was arranged. And to the surprise of many at the time, Akiba emerged as the victor.

This is approximately when he decided to quit his rabbinical studies entirely and devote himself completely to chess. The decision was mourned upon by his family who wanted him to follow the well-trodden path of his ancestors. While his mother prayed the lord to grant her son the wisdom to come back, Akiba was preparing religiously to shock the world’s elite with his moves. It was in the year 1907 that he played the classic game, Rubinstein’s Immortal (against Rotlewi), which Anand admitted to have remembered while delivering his monstrous attack against Aronian at the Tata Steel 2013. Do experience the two brilliancies for yourself below. 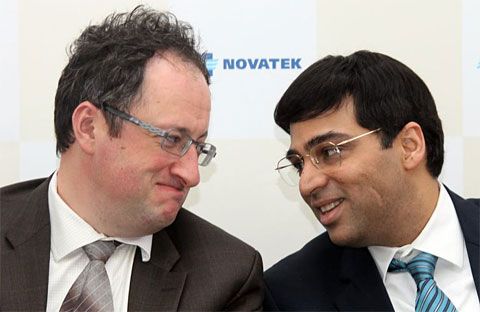 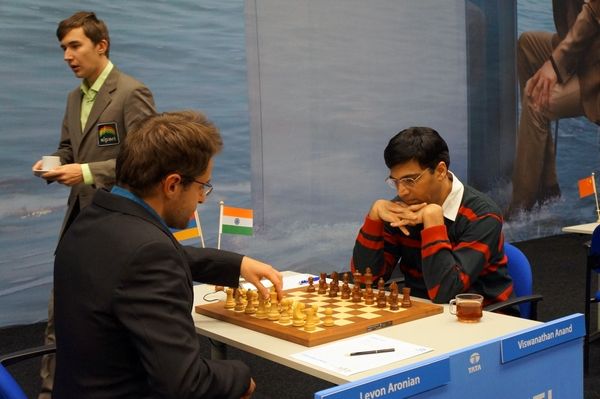 ...in the fourth round of Wijk Aan Zee tournament against Levon Aronian.

Anand says: 'And here, the game which kept on coming to my mind was the famous
classic Rotlewi-Rubinstein. For me, it's just a classic. I imagine for Gelfand
also. He would have remembered it effortlessly, first of all, he knows his
classics and secondly it is Rubinstein. He is one of his big heroes.
Rubinstein's main point was to invade with both rooks, but except for this it
is very similar.'

Levon Aronian-Viswanathan Anand (Notes by Anand in English and German) 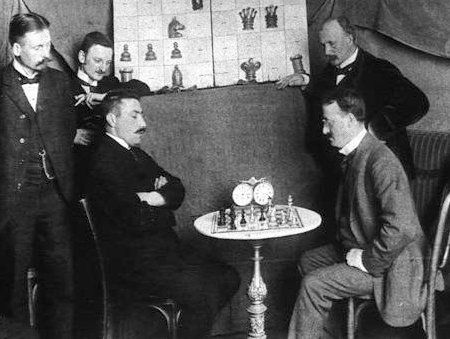 In the years that followed, Akiba developed himself into one of the strongest players in the world. He won many of the strongest events of the time ahead of several masters such as Ossip Bernstein, Geza Maroczy, Carl Schletcher, Frank Marshall and so forth. But he still had to beat one man – the world champion, Emanuel Lasker. 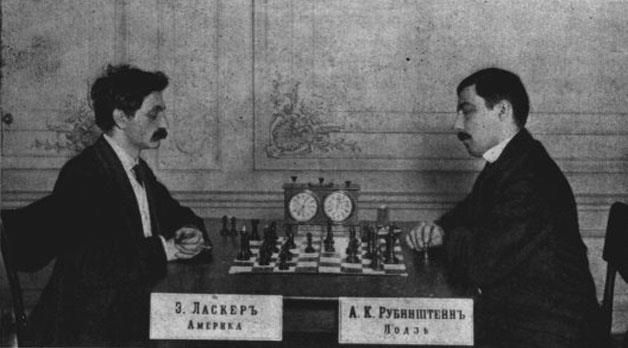 Akiba finally got his first chance to cross swords with Lasker at the St. Petersburg tournament in 1909.

Having won his game against Lasker, Rubinstein was leading the tournament until the last round when Lasker caught up and tied for first. He had now defeated the world champion and was longing to snatch his coveted crown. In subsequent years, Akiba made several attempts to arrange a match for the world title but failed consistently in raising funds demanded by Lasker. Lasker, being the world champion, had the privilege of making such demands, as he could handpick any prospective contender for his challenger.

Whilst arranging funds to meet the demands of Lasker and making valuable contributions to the opening theory, Akiba reached the prime of his career in 1912 when achieved the unprecedented feat of winning five consecutive international events, namely: Breslau, Warsaw, Vilna, San Sebastian and Pistyan. It was also during this time that he has been considered by many to be the best player of the time. By now he had made it clear to the world that he was going to be the next world champion. He had even arranged the funds, as demanded by Lasker, and had had a match arranged to be played in the spring of 1914. Alas, that was not to be. The outbreak of the First World War shattered all possibilities for the match to take place.

With the end of the war ended Akiba’s prospects of clinching the world championship title. He was a different man now. Not that he had lost his ability to play extraordinarily, but the ravages of the war had taken their toll on his mind. He was now a self-doubting man whose modest, timid nature was taking the shape of anthropophobia and schizophrenia. Indeed, even during these years, he played several masterful games that continue to have a profound influence on players, even today. Some highlights of the final years of his career were Vienna, 1922, where he won ahead of the would-be World Champion, Alexander Alekhine; the 1930 Hamburg Chess Olympiad, where he led the Polish team which won the event and scored an unbeaten 15/17 (+13 -0 =4); and the 1931 Chess Olympiad where he again led the Polish team and bagged a silver.

By 1932, Akiba was forced to withdraw from competitive chess due to his mental disorders. At one point, while playing in tournaments, he would hide in corners of the playing hall, waiting for his opponent to make a move. To follow his heart, he lost his mind; but kept playing, nevertheless. He lived the remainder of his life switching his place of residence between home and sanatorium in Belgium. Mostly locked into an attic in solitude, he would analyze chess openings and prefer not to talk to anyone. He had quit bathing, shaving or clipping his beard. It’s speculated that once some Nazis had come to take him to the concentration camp. When told about his insanity, they asked him if he would like to work for the Third Reich, to which he simply said ‘yes’. This not only convinced the soldiers that he was insane but also made them let him be as he was. They thought living was a bigger suffering for him than death at the concentration camp.

Akiba died in Antwerp, Belgium on March 14, 1961. Unlike most of his contemporaries, he did not leave any literary legacy behind; but his influence on opening theory has remained timeless. Be it in the French defence or the Four Knights, the Queen’s Gambit or the Nimzo-Indian, most – if not all – of his theories have endured. He was one of the earliest exponents of the idea that the opening should be played taking the endgame into account. It was his scientific approach that won heaps of praise from masters and even world champions of all generations. GM Boris Gelfand has gone so far as to say, “What I like in chess, comes from Akiba”.

I would like to end this little encomium of mine with this rook endgame in which Akiba won from a seemingly dead drawn position. 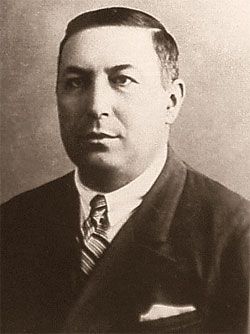 The father of modern technique.

About the above endgame:

“Had Rubinstein played this endgame 300 years earlier, he would have been hanged for practicing witchcraft!” - Editor of the Carlsbad Tournament book. 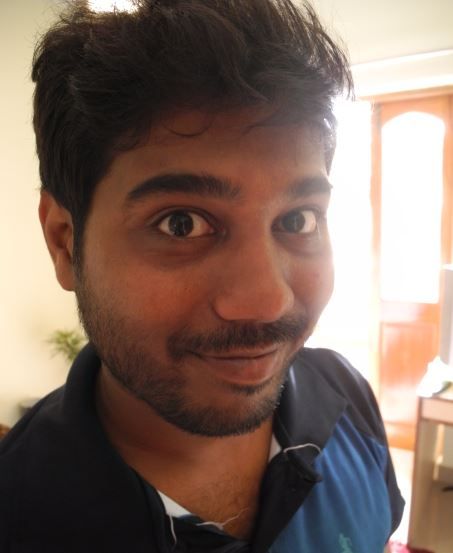