New in Chess Magazine is one of the most famous chess magazines in the world. It is read by chess players across 116 countries. The second issue of 2017 has our very own Adhiban Baskaran on it's cover. ChessBase India has collaborated with New in Chess and brought you the hard copy of this issue for a discounted rate. And not to forget - you also get the magazine delivered to your footstep with Adhiban's autograph on it! Limited copies. 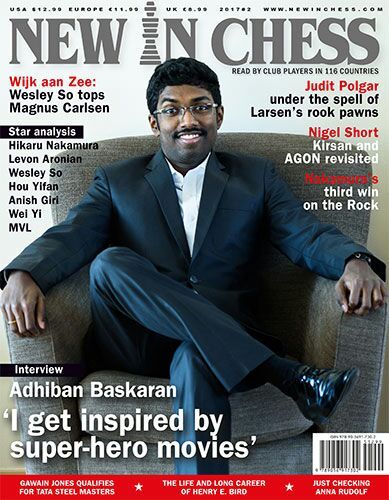 The second issue of New in Chess Magazine for 2017 has Adhiban's picture on the cover page. It's a proud moment for Indian chess. It has been years since any Indian apart from Vishy Anand has been featured on the cover page of world's most popular chess magazine.

ChessBase India has collaborated with New in Chess to provide you the issue at a discounted rate - Rs.499. You not only get the issue delivered at your doorstep but also get Adhiban's signature on it.

Contents of the magazine:

Infographic
Is Wesley So's unbeaten streak of 56 games anywhere near the record in elite competition?

Living the dream
As if he is casually checking off dream goals on a bucket list, Wesley So is going from strength to strength. In Wijk aan Zee the 23-year-old American reached a new milestone as he claimed another super-tournament, for the first time finishing ahead of the World Champion. A remarkable report by Dirk Jan ten Geuzendam, with crucial games annotated by So, Aronian, Giri, Adhiban and Wei Yi.

Interview: Adhiban Baskaran
Meet 'the next big thing from India'. He tells about his Augmented Destiny and how he beat Karjakin and reached a winning position against Carlsen.

Judit Polgar's Column
A masterclass on what she learned from Bent Larsen.

A fresh Bird's view
In his career, which spanned five decades, Henry Bird (1829-1908) was a tireless promotor of the game. His victims included Staunton, Steinitz and Lasker. An intriguing portrait by Hans Renette.

Tata Steel Challengers
Gawain Jones qualified for the 2018 Masters and happily shares his adventures in a chess-crazy village. He annotates a crucial win, with additional game annotations by Ragger and Hansen.

Rock 'n' Roll
Hikaru Nakamura and Ju Wenjun were the big winners in the Tradewise Gibraltar Chess Festival. A special report with masterclasses by Nakamura, MVL, Giri and Hou Yifan.

Nigel Short
Our columnist cannot believe why hardly anyone wants to see what is there for everyone to see: Agon Ltd is bad for chess (and for your blood pressure).

Sadler on Books
Matthew Sadler reviews five books: 'The Fianchetto Solution' by Neiman and Shoker, 'Opening Repertoire: The English' by Cummings, 'A Simple Chess Opening Repertoire for White' by Collins, 'Chess Strategy for Kids' by Engquist and 'Najdorf x Najdorf'.

Contributors to this issue