A few days ago strong Indian grandmaster Abhijeet Gupta posted a study on Twitter with the words, "One of the prettiest studies I have seen in recent times!" The author of this article tried his hand at the study and gave the task of solving to a number of his students. The reaction was the same - everyone who was able to solve it experienced a feeling of unadulterated joy. We now present the position to you along with the detailed solution. Read the article to know what King Leonidas is doing on the thumbnail!

I was casually scrolling through my twitter feed when one of the tweets by a top Indian grandmaster caught my attention:

And below this was the following position: 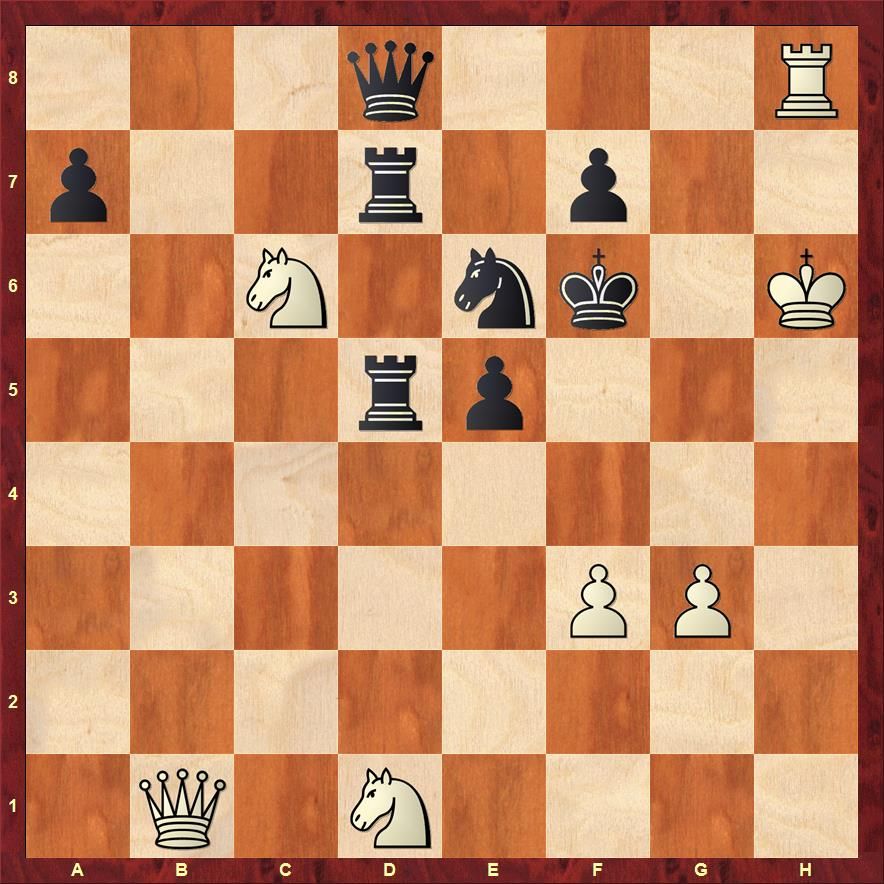 It's White to play and win.

Believe us when we say that 2600+ grandmasters are not easily impressed by studies. And if they are, then you should definitely spend time trying to figure out the answer. Because if Abhijeet Gupta, who is rated 2654, says it is one of the prettiest studies he has seen in recent time, it has to be somethng special! Don't go further if you haven't tried solving. Without putting in the effort you won't be able to appreciate the beauty of the solution.

How do you go about solving a study? The first part is to overcome the mental block that the position should be difficult and the answer very pretty. You need to think as if this is a position that has arisen in your tournament game and you need to find the best way for White to proceed.

Always begin with checking the material imbalance. Because without knowing who is materially better you can never be able to decide whether a particular sacrifice actually works. White is an exchange and a pawn, effectively three points down.

Giving the move to your opponent:

Most of the people now start with looking for moves for White. It could be perfectly reasonable to start with this, but instead I would recommend an intermediate step. Give the move to your opponent and check what would he do if it were Black to play. You can immediately see that Black would win the game either with 1...Qxh8# or 1...Rxd1. Two things can be gained from this exercise. You do not overlook your opponent's simple tactics and you know that this is a position where something drastic has to be done.

It's now time to think about moves for yourself. A good rule of thumb is to always begin with checks and captures. This is extremely useful because checks and captures are usually forcing in nature and help you to understand what exactly is going on. The natural Candidate moves are 1.Nxd8 and 1.Rxd8. Before we start calculating these moves it would make sense to see if there are some checks in the position. To a trained mind, the first check that looks the most logical (even though you are giving up the queen!) is 1.Qf5+. The main reason why one would even consider this move is because 1.Qf5+ Kxf5 is met with 2.Ne3+. The fact that the knight is coming into the game with a tempo is good enough for us to at least bring this queen sacrifice into our list of Candidate moves. 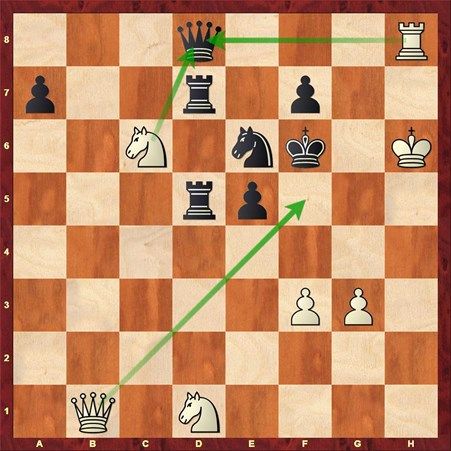 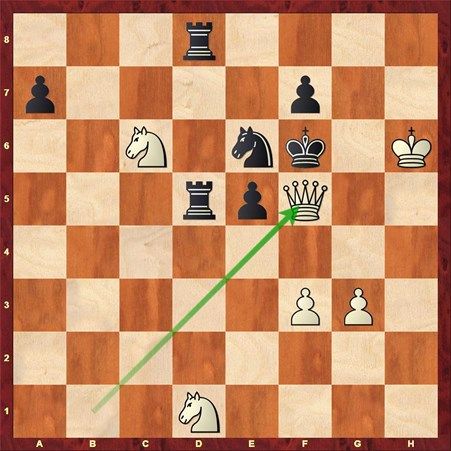 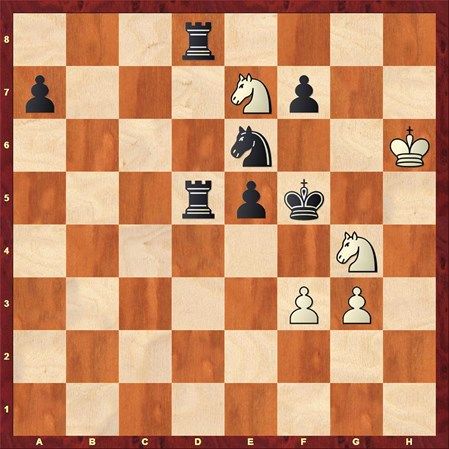 Pretty, isn't it!
If you are thinking that I am trying to just show you inferior variations and wasting your time, you are mistaken. It is 100% true that 1...Rxd8, in response to 1.Rxd8, was a bad move, but it helped us to find this beautiful idea that the black king can be checkmated with the two knights. This shows us how important it is to deflect the defenders of the e7 square, so that Ne7+ is possible at some point.
However, after 1.Rxd8 Black has the better move 1...Nxd8! And after 2.Ne3 Nxc6! 3. Qf5+ Ke7 4.Nxd5 Rxd5, we reach the following position: 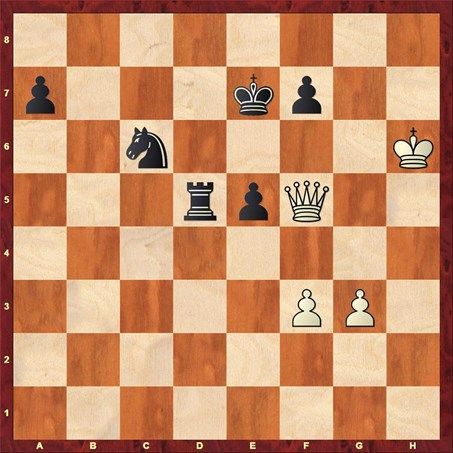 It is clear that White is better in this final position, but winning this would be extremely difficult. It is not at all easy to create a passed pawn and how White should proceed is unclear. So taking with Rook on d8 can be played by White if he doesn't find something better.
We need to come back to the initial position and check our final candidate move 1.Qf5+. When I gave this position to Amruta (my wife) her first reaction was the move 1.Qf5+ and this would also be the reaction of many players because it looks like an answer to a study! However, no matter how hard you bang your head you will not be able to mate the black king as after 1...Kxf5 2.Ne3+ Kf6 3.Ng4+ Kf5 you have nothing more than a perpetual with 4.Ne3+. The e7 square is securely controlled. 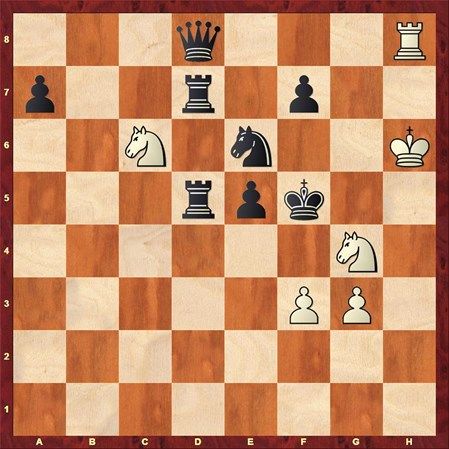 The queen sacrifice doesn't work and maximum that White has is a perpetual check
We have exhausted all our candidate moves and we have still not found the answer. This brings us to the most important point that I would like to make with the help of this article.
Persistance and not giving up:
Just like in life, you can succeed on the chess board only if you don't give up. I gave this position to many players and saw that after checking these three obvious moves mentioned above and not getting the answer, they pleaded me to tell them the solution. With this approach you will never be able to experience the unadulterated joy of cracking a difficult problem. The tougher the challenge, the sweeter is the victory. So don't give up and let's have a look at the initial position with a fresh mind:

We have to either play a forcing move or stop Black's threat of Qxh8. The possible moves could be 1.Rh7 but it fails to 1...Qf8+. Also 1.Qh7 has absolutely no threat and 1...Rxd1 looks strong. At this point when you are dying out of frustration you might find the correct move 1.Rg8!! 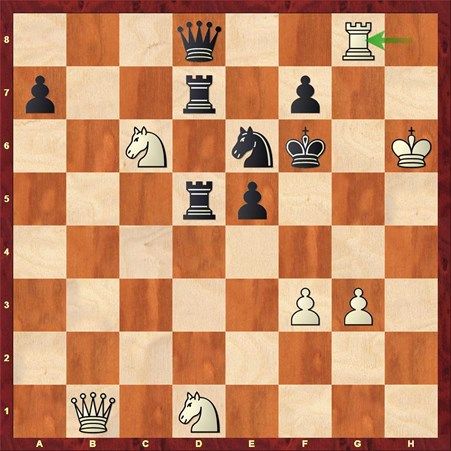 You have taken out the threat of Qxh8 and are now threatening 2.Rg6+! fxg6 3.Qxg6#. This variation is very important and narrows down the opportunities that Black has at his disposal to just one move. He must take the rook. But what exactly is happening after 1...Qxg8. Well let's have a look at a skeleton position: 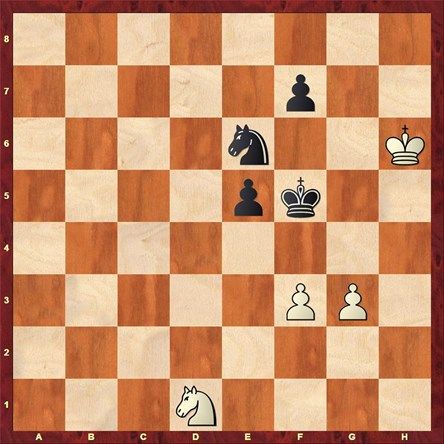 White to play. Can you spot the mate in three? Of course you can!
Now let's go back to the position where Black has just taken the rook with his queen. 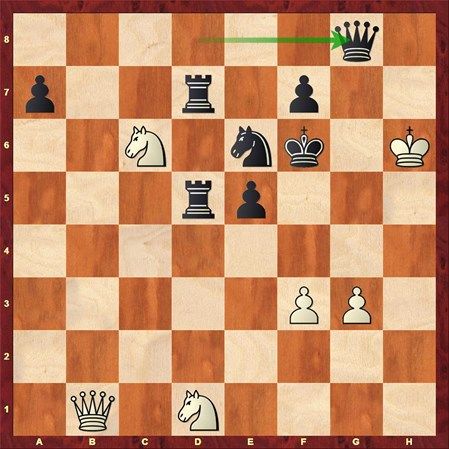 Suddenly it all becomes clear! Rg8 was a decoy sacrifice. We wanted the queen to be on g8. And why exactly? Because, White now sacrifices his queen with 2.Qf5+!! Kxf5 and as if all this sacrificing was not enough, here goes another piece into the fire with 3.Ne7+!! 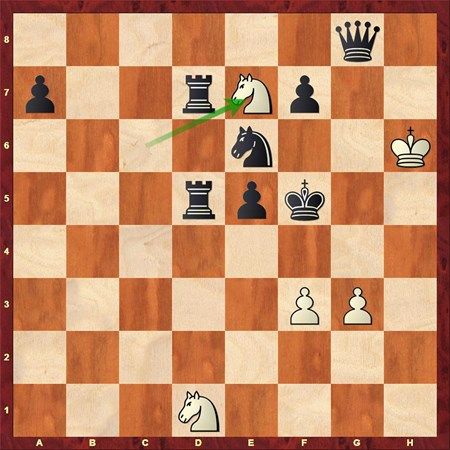 ChessBase India thanks Abhijeet Gupta for sharing this beautiful study and we hope that, you dear readers, had good time trying to solve it!