The King Salman World Rapid and Blitz Championship 2019 is here! It is one of the most exciting events of the year with the participation of almost all of the top players in the world including World Champion Magnus Carlsen. Carlsen will be looking to win the title in both rapid and blitz and make it a triple crown for himself! The opening ceremony was held on the 25th of December at the Russian Chess Museum on the Gogolevsky Boulevard in Moscow. IM Sagar Shah and Amruta Mokal were present at the venue and bring you some of the first-hand impressions from the place. We also have some very interesting interviews with Carlsen, Wang Hao, Sara Khadem, Anton Korobov and Peter Leko.

The year 2019 is coming to an end and for a chess fan, there is no better way to see it through than watching the fast paced thrilling action from the World Rapid and Blitz Championships 2019. The first round of the rapid section will begin from the 26th of December 2019. On the day of Christmas, 25th of December, the Opening Ceremony was held at the famous Russian Chess Museum on the Gogolevsky Boulevard. How did it all pan out? Here's a short video that gives you the feel of what took place:

It was one of those opening ceremonies where the organizers hoped that only the invited players would turn up as the space at the Russian Chess Museum wasn't enough to accommodate all the players. 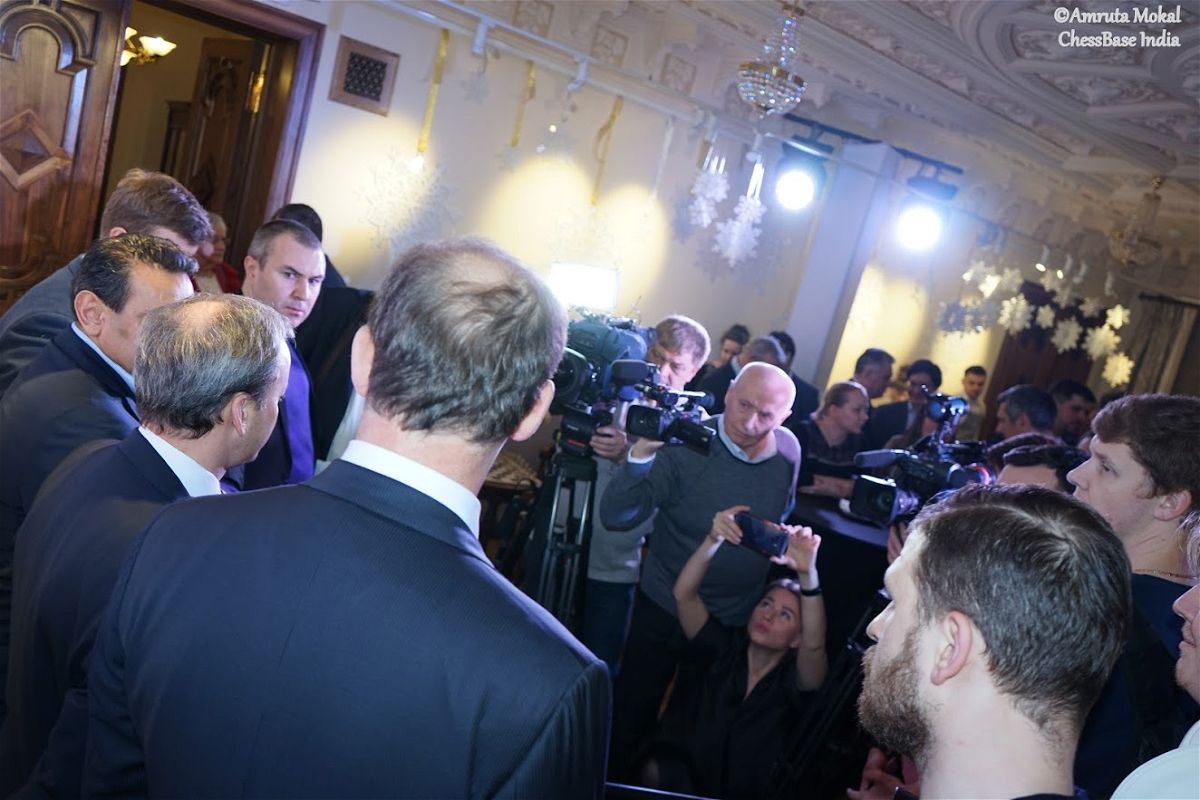 But when you have so many top players of the world and all the big dignitaries of FIDE present, you are bound to have a lot of media attention as well! | Photo: Amruta Mokal

The turnout was big. There were basically two rooms on the first floor of the Russian Chess Museum. One where the actual opening ceremony took place and another one where the press conferences happened and the players could follow the opening ceremony through an LED television. Magnus Carlsen, Anna Muzychuk, Hikaru Nakamura and Kateryna Lagno, the top four seeds in four events (open and women rapid and blitz) were the only top players apart from the media and the FIDE officials in the main opening ceremony hall. The rest of the players were socializing in the other room, talking to each other, exchanging ideas, doing interviews and enjoying the delicious food! 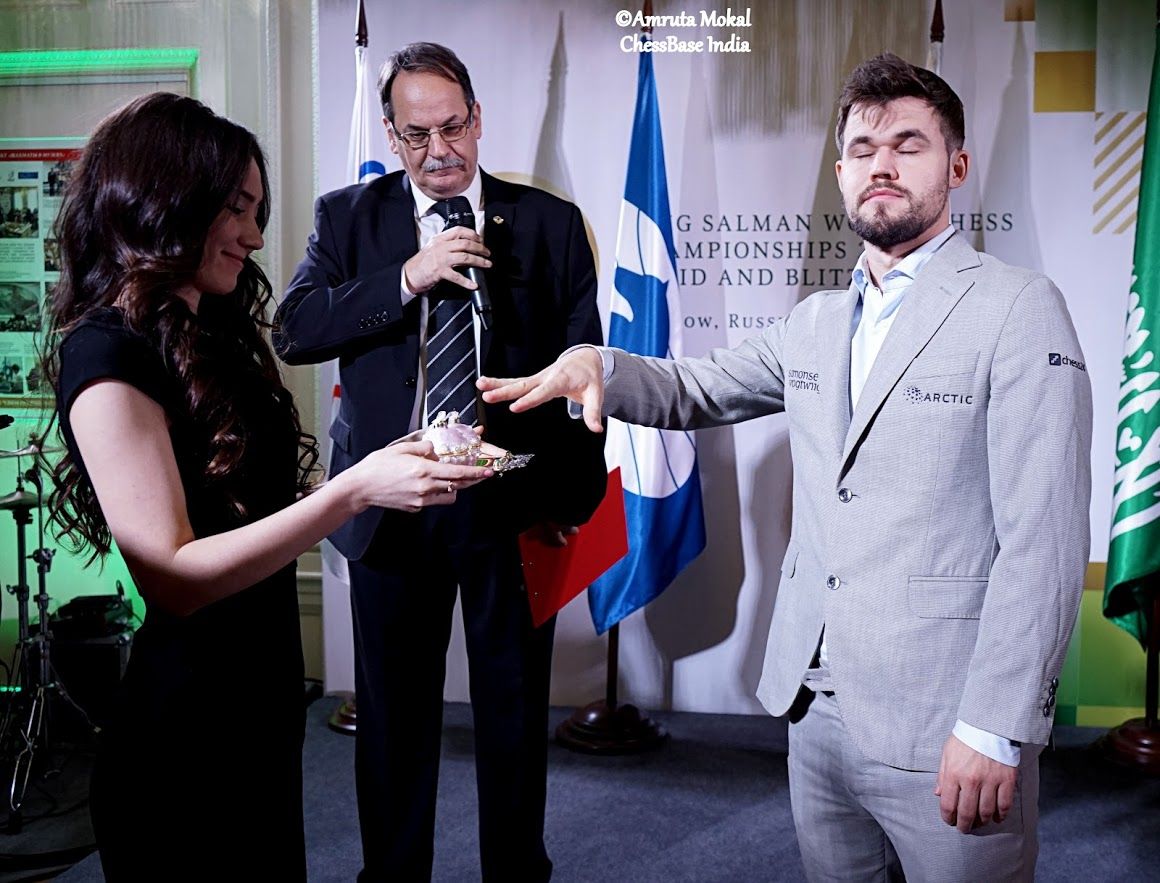 Magnus Carlsen having a bit of fun while choosing his colour at the drawing of lots! | Photo: Amruta Mokal

World Champion @MagnusCarlsen has some fun at the drawing of lots of the World Rapid and Blitz 2019.

Watch the full video of the opening ceremony: https://t.co/1yn6PFARxb pic.twitter.com/C3Vqy404jV 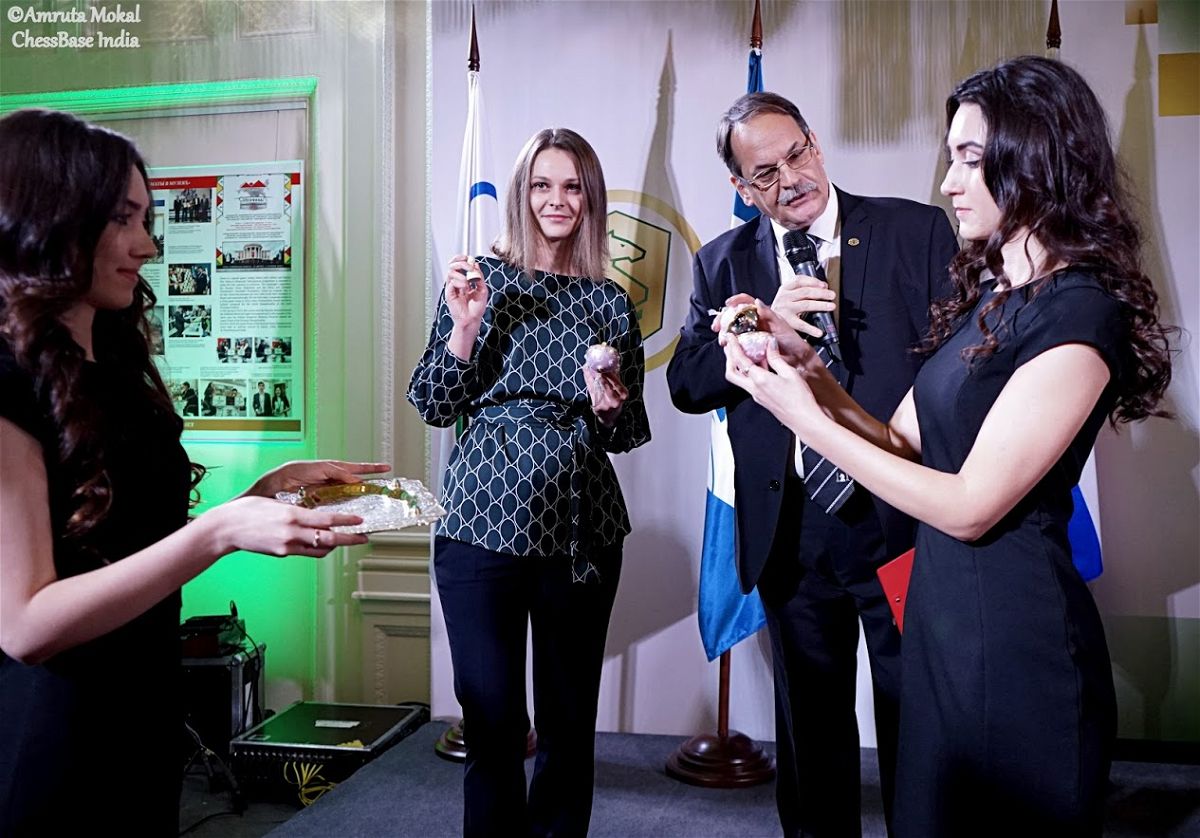 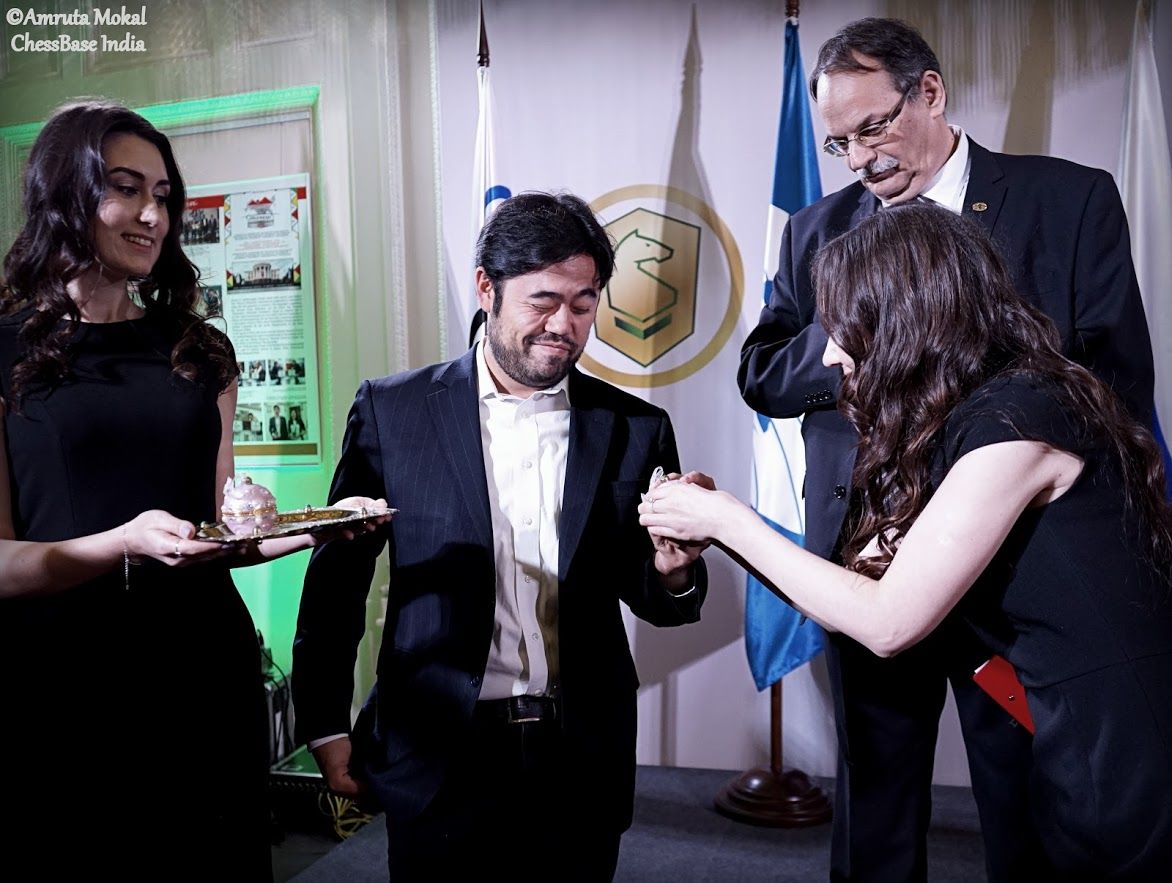 The world no.1 in blitz is not Magnus. It's Hikaru Nakamura. He also got the white pieces in round one of the blitz on board 1. | Photo: Amruta Mokal 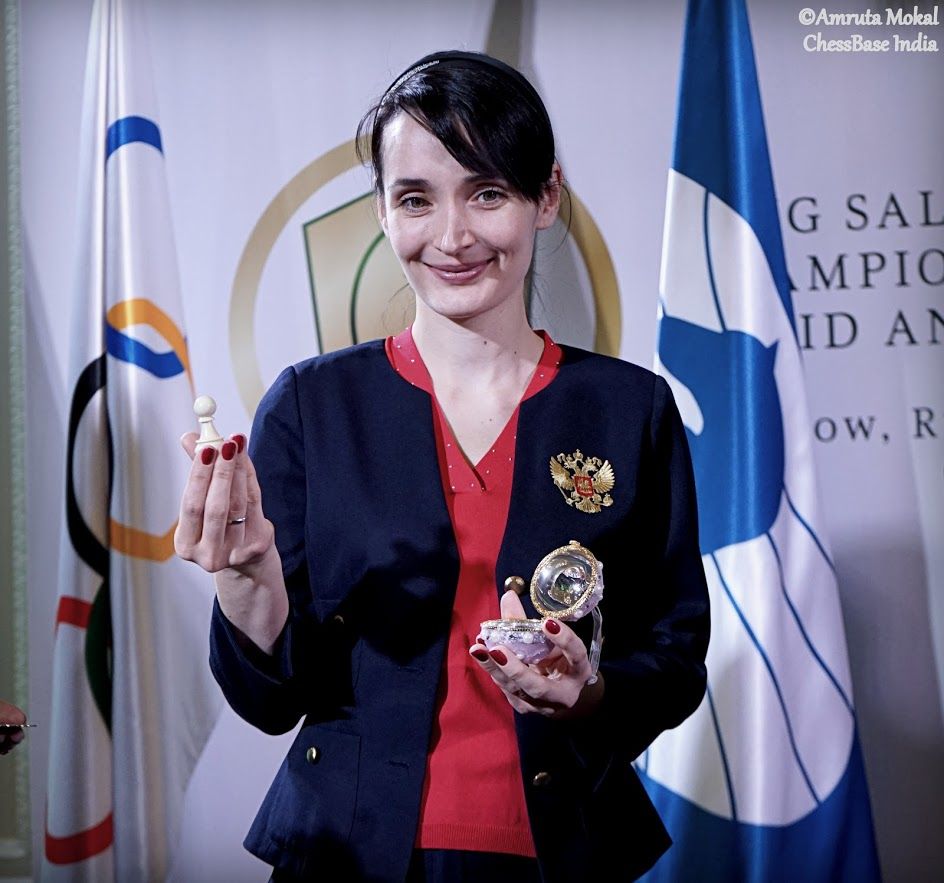 Local favourite and the defending champion in the women's blitz event Kateryna Lagno also drew white in game one of the Women's World Blitz Championship. Kateryna is the only women's player who has an Elo of 2600+ | Photo: Amruta Mokal
A small press conference was held where we were able to ask Magnus his thoughts about the upcoming Candidates event, who he thinks are favourite. Magnus also speaks about the MVL issue. 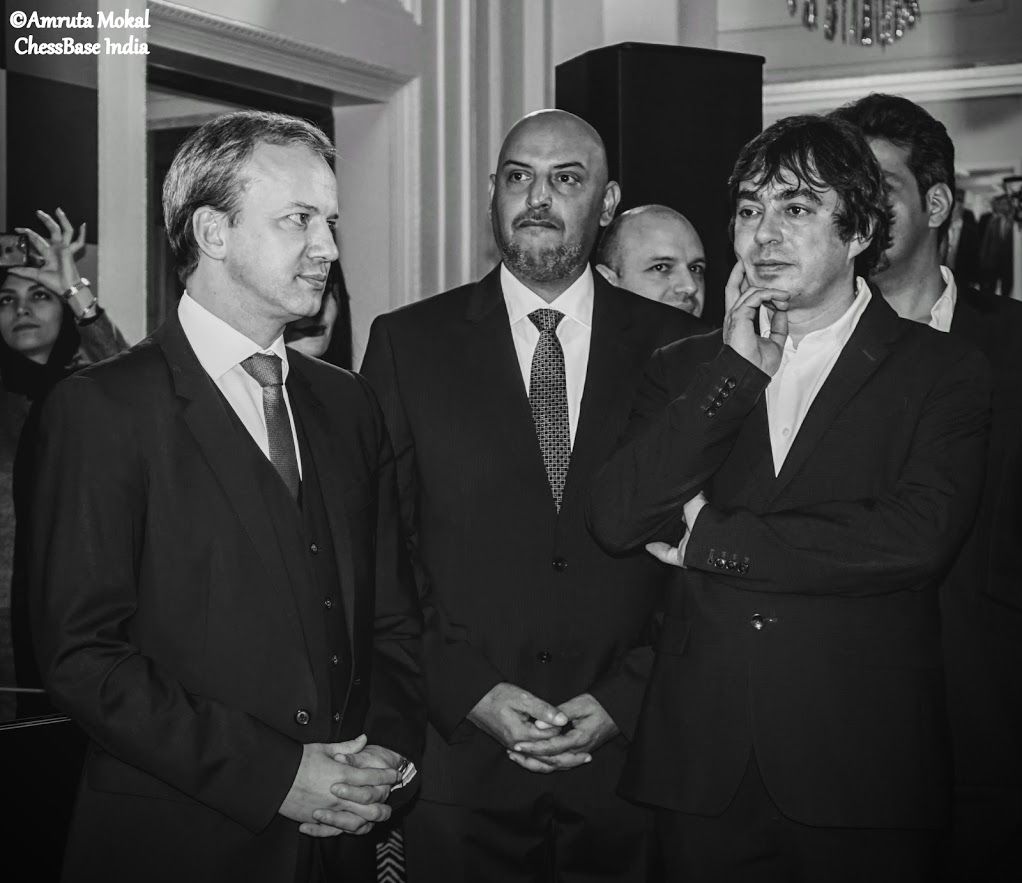 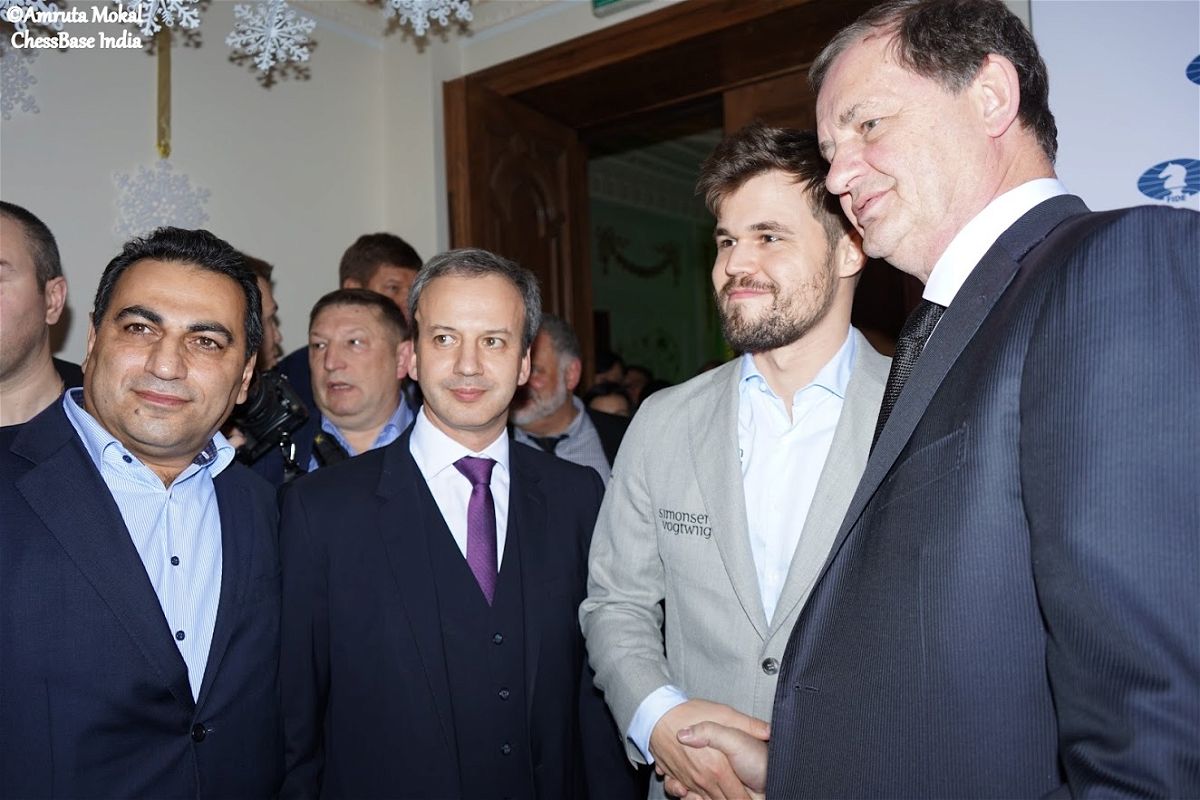 The World Champion with the VIPs! | Photo: Amruta Mokal 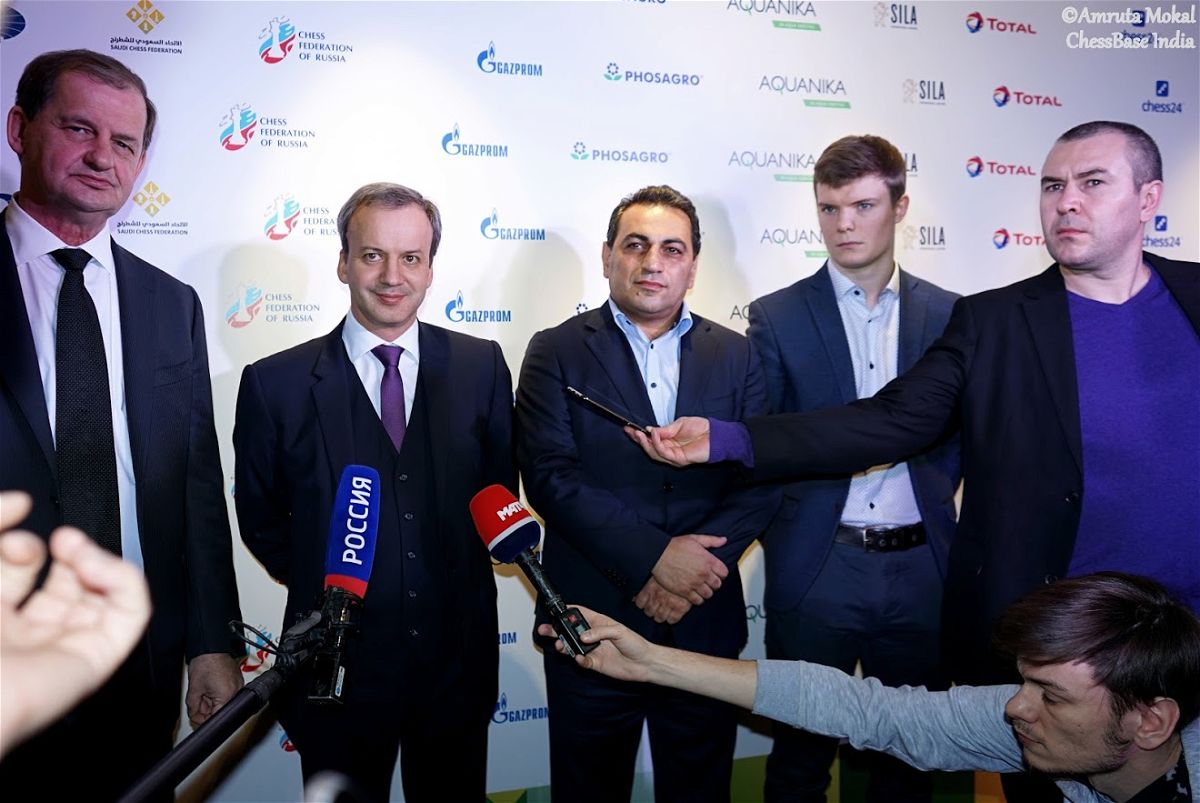 All the top media houses of Russia were here to interview with FIDE President, VIPs and top Russian players | Photo: Amruta Mokal 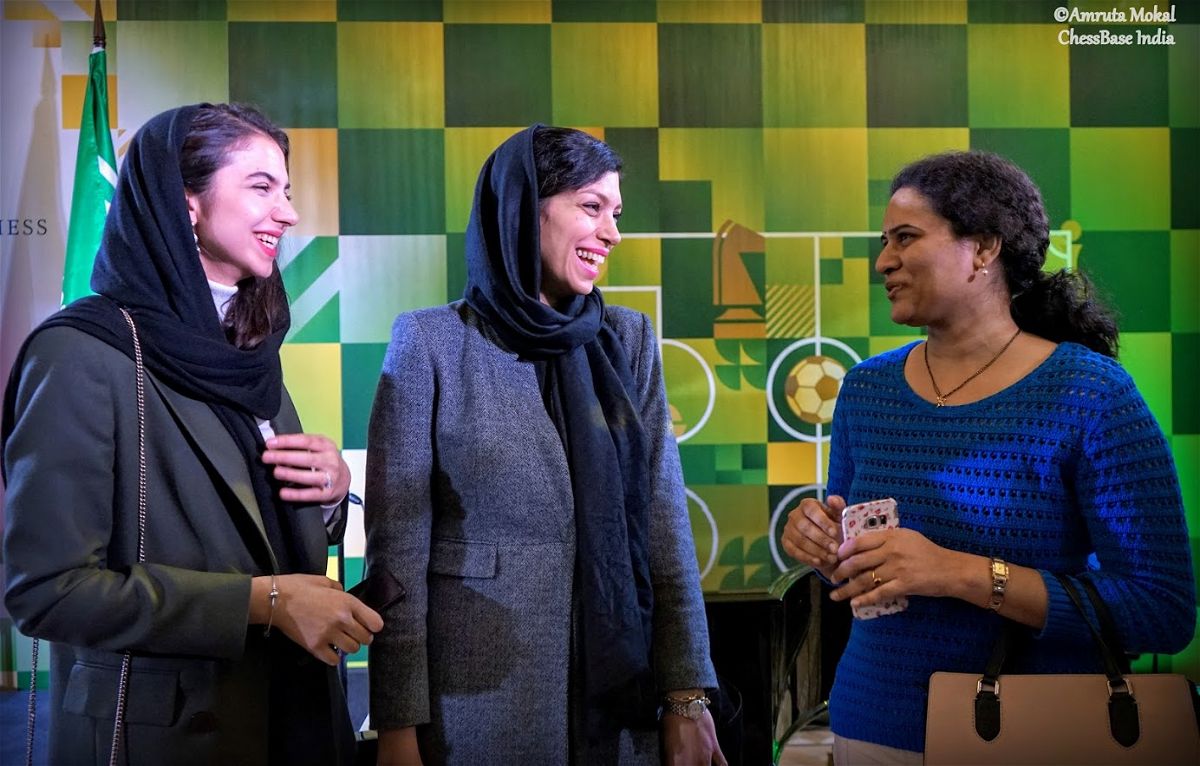 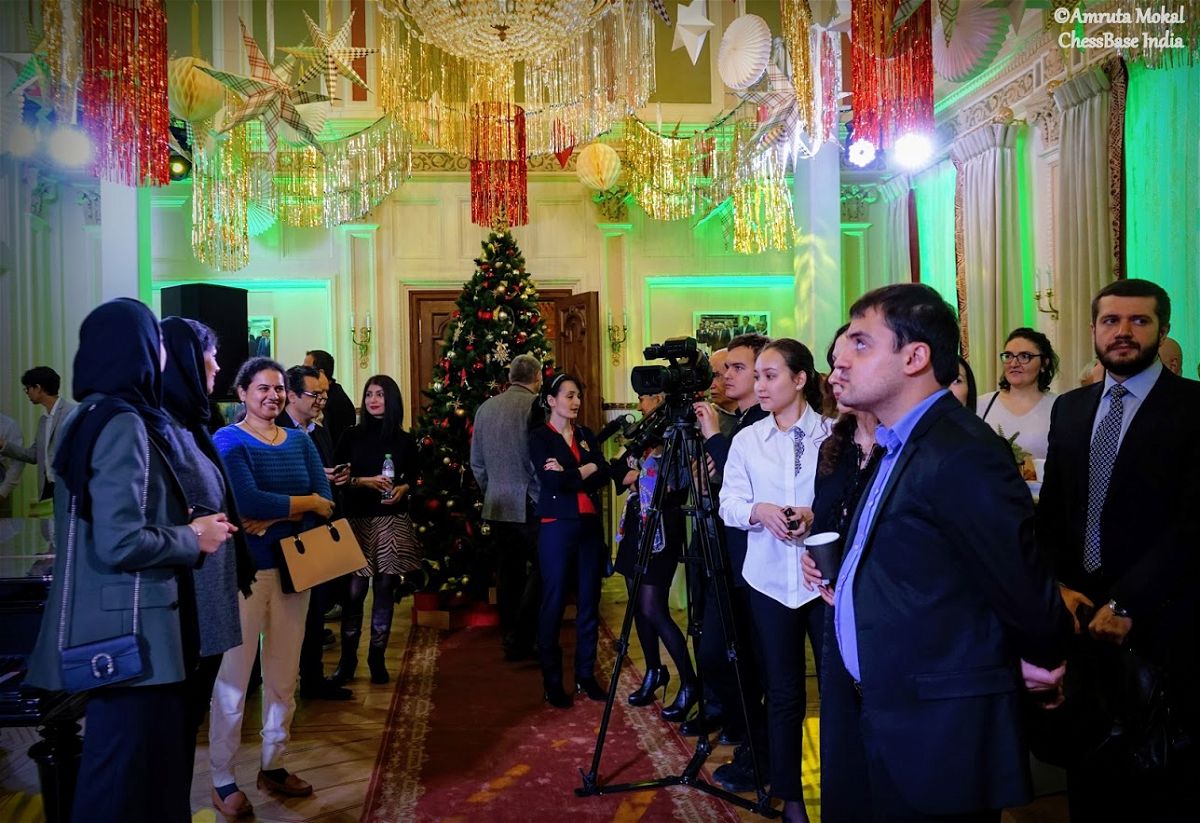 The festive decoration of the opening ceremony | Photo: Amruta Mokal 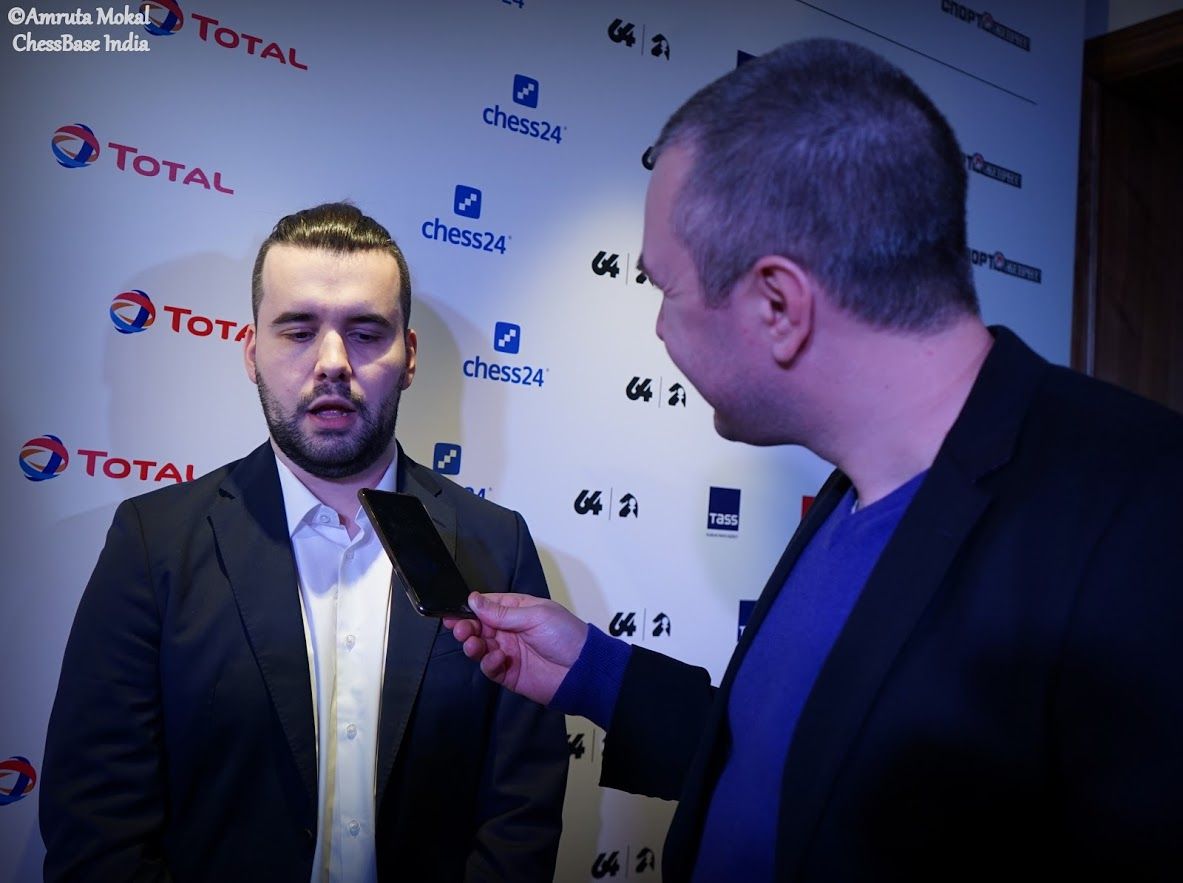 Ian Nepomniachtchi interviewed after successfully making it to the Candidates 2019 | Photo: Amruta Mokal 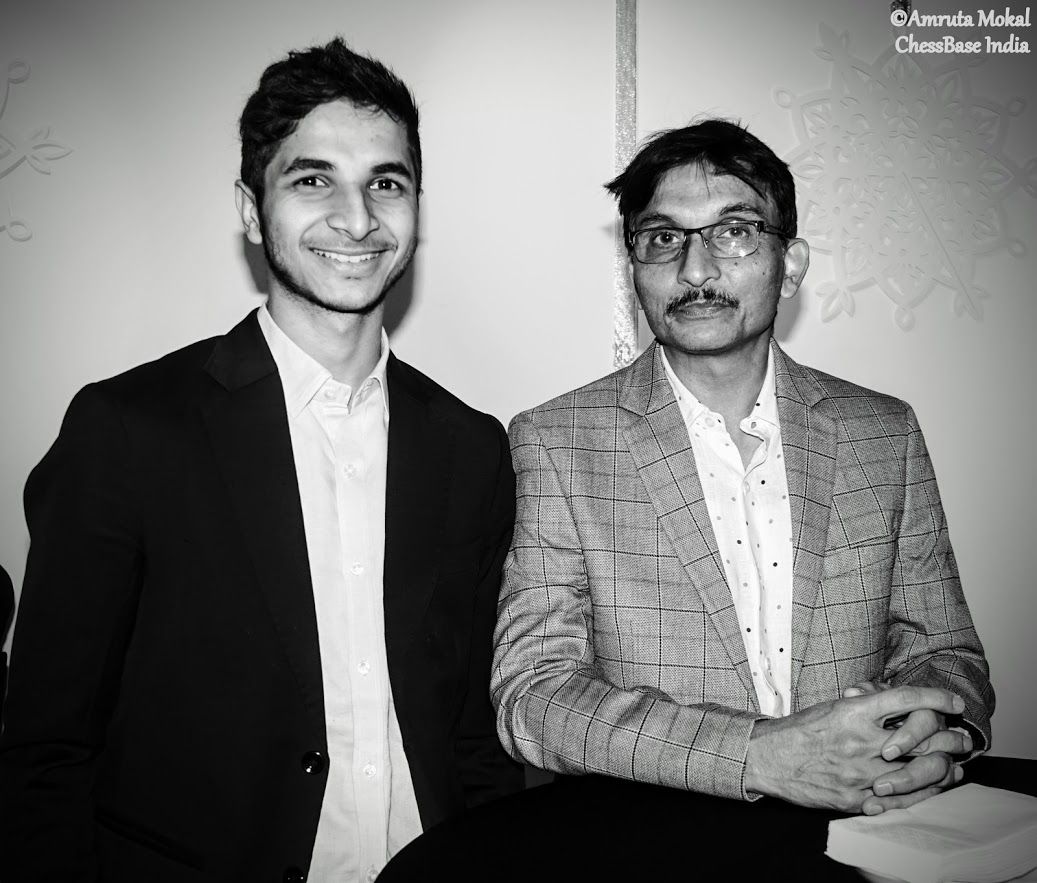 With Vishy Anand not taking part, India's flag will be carried by Vidit Gujrathi who is present at the event with his father Santosh Gujrathi | Photo: Amruta Mokal 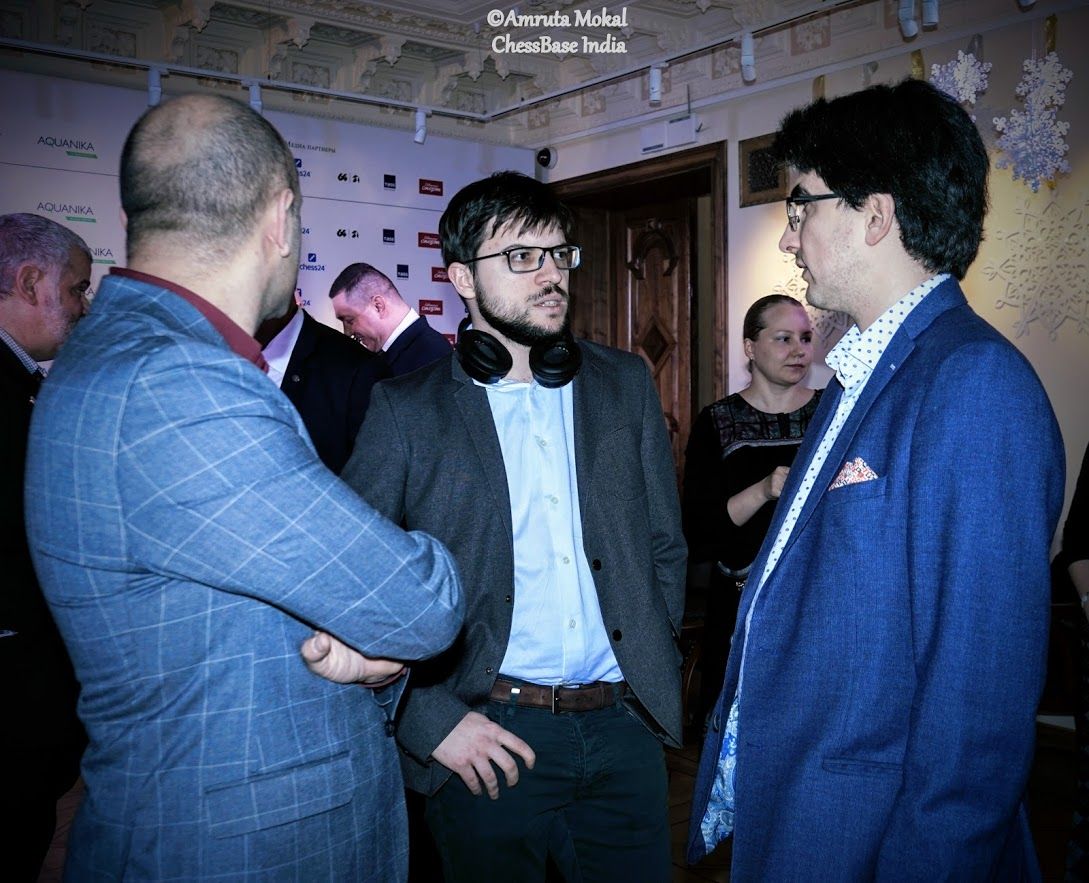 MVL speaks to the FIDE press officer Milan Dinic as David Llada looks on. The French GM's manager has made an appeal to the Russian Chess Federation to consider the spot of wild card given to Alekseenko. | Photo: Amruta Mokal 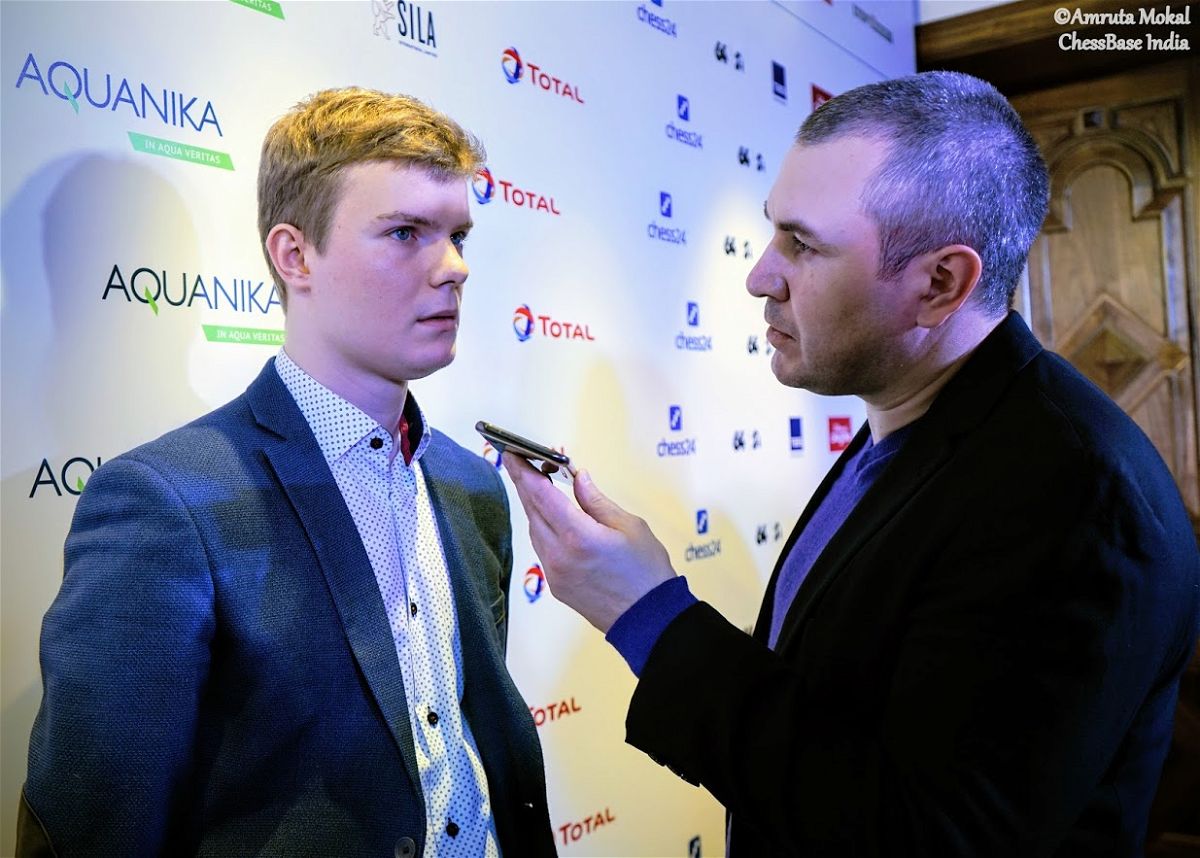 Alekseenko, on the other hand, looked cool, calm and composed, and was busy throughout the evening giving interviews to the Russian media | Photo: Amruta Mokal 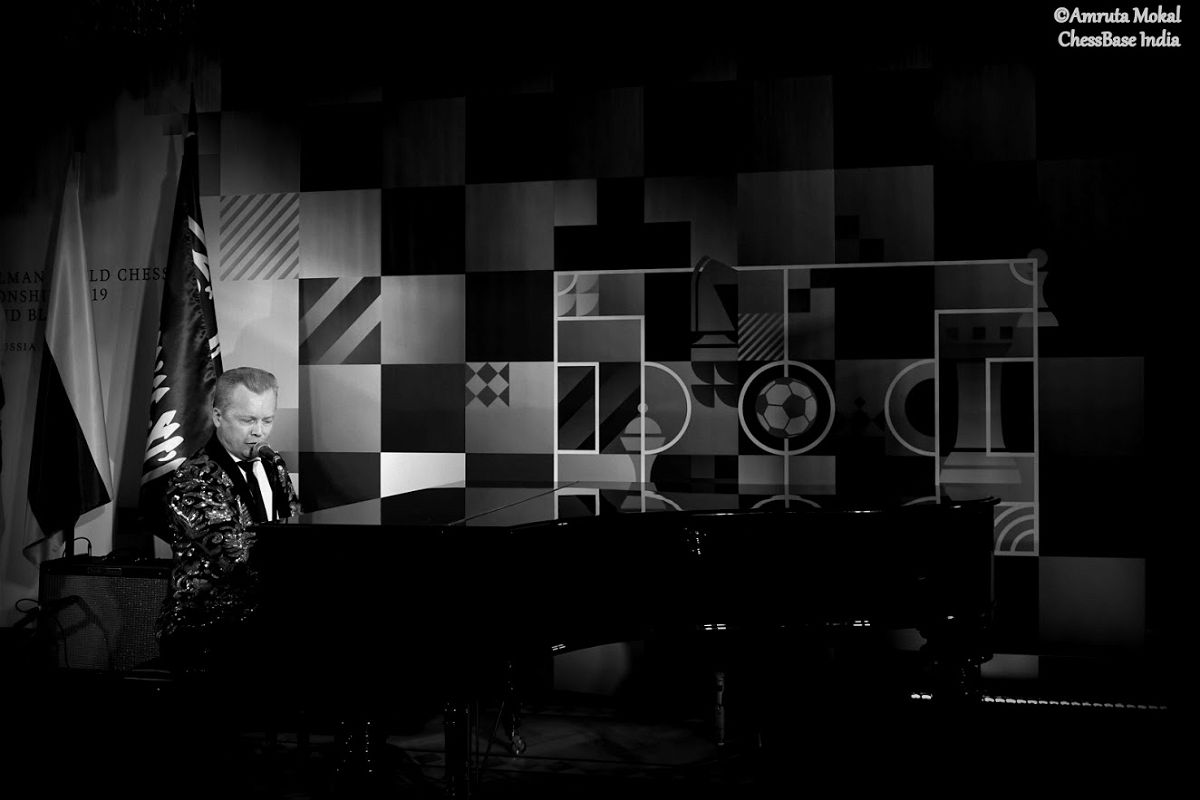 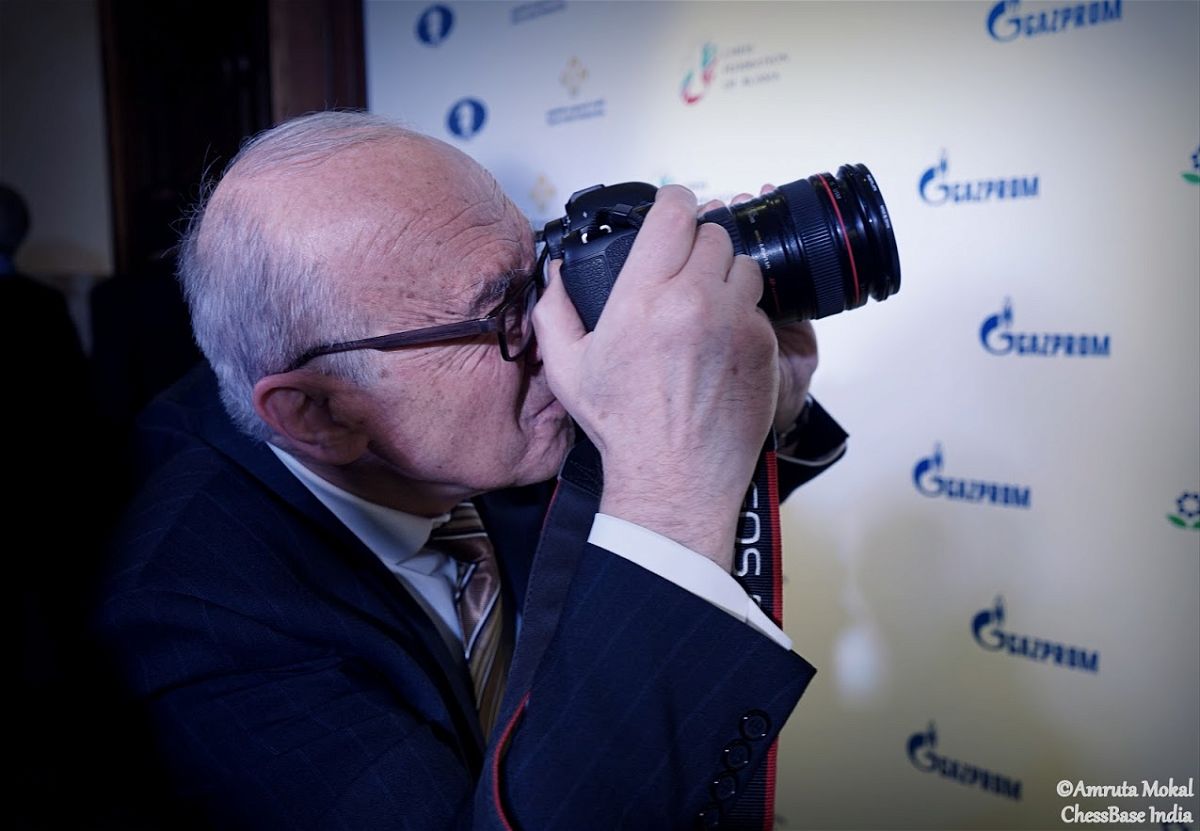 Apart from the players, it also a big pleasure to see legends like Boris Dolmatovsky (photographer from the Karpov vs Kasparov matches fame) in action | Photo: Amruta Mokal
Wang Hao in an interview with ChessBase India speaks openly about being in the Candidates 2020, his personal equation with Ding Liren and his favourite video game!

Alireza Firouzja not playing for the Iran flag

Alireza Firouzja, number one player of Iran, will play under the FIDE flag and not Iran

Players who have represented Iran have always faced a problem when pitted against an Israeli opponent. We saw this happening at the World Juniors, where facing the Israeli opponents was so stressful, that both Aryan Gholami and Amin Tatatabaei not only had to give walkovers but also had to withdraw their names from the event after a point. Such walkovers are detrimental for any ambitious player, especially Alireza Firouzja who is one of the biggest talents in the world of chess right now. Although Alireza's rating is in 2600 zone for both rapid and blitz it wouldn't wrong to say that he is one of the contenders for a podium finish at this year's world rapid and blitz. In order to not jeopardize his chances, he has decided not to play under the Iran flag and have problems against Israeli opponents like Gelfand, Postny, Smirin, Postny, Huzman. Rather Firouzja plays under the FIDE flag. It's quite a big loss for Iran as their biggest talent won't play for them, but it seems like this was the only decision that Alireza had at his disposal if he wants to play without stress.

We ask Sara Khadem, Iran no.1 player, as to what she thinks about Alireza Firouzja's decision 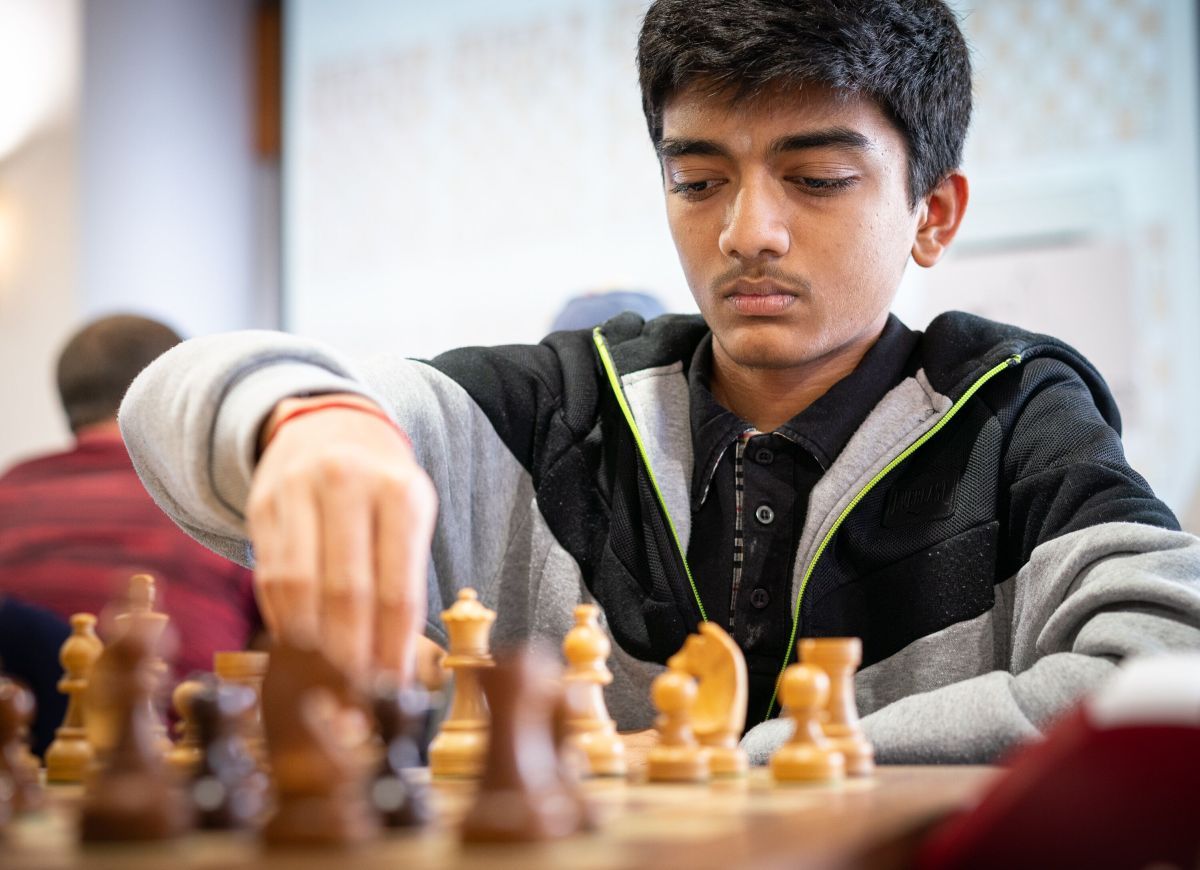 One player that no one would like to face at the World Rapid Championships 2019 is D. Gukesh! The second youngest GM in the world currently has an Elo of just 1799 in rapid. Even if a top player beats him, they would get close to one or two Elo points. While this tournament is like Christmas party for Gukesh. It will be interesting to see as to how many Elo points he collects during the tournament!

An important question to be asked is - how come a player with such a low rating is admitted to the tournament? Well, in the open section the rating cut off is 2550 and above. As Gukesh's classical rating meets this criteria, it is good enough for him to participate.

Kramnik coming back from retirement! 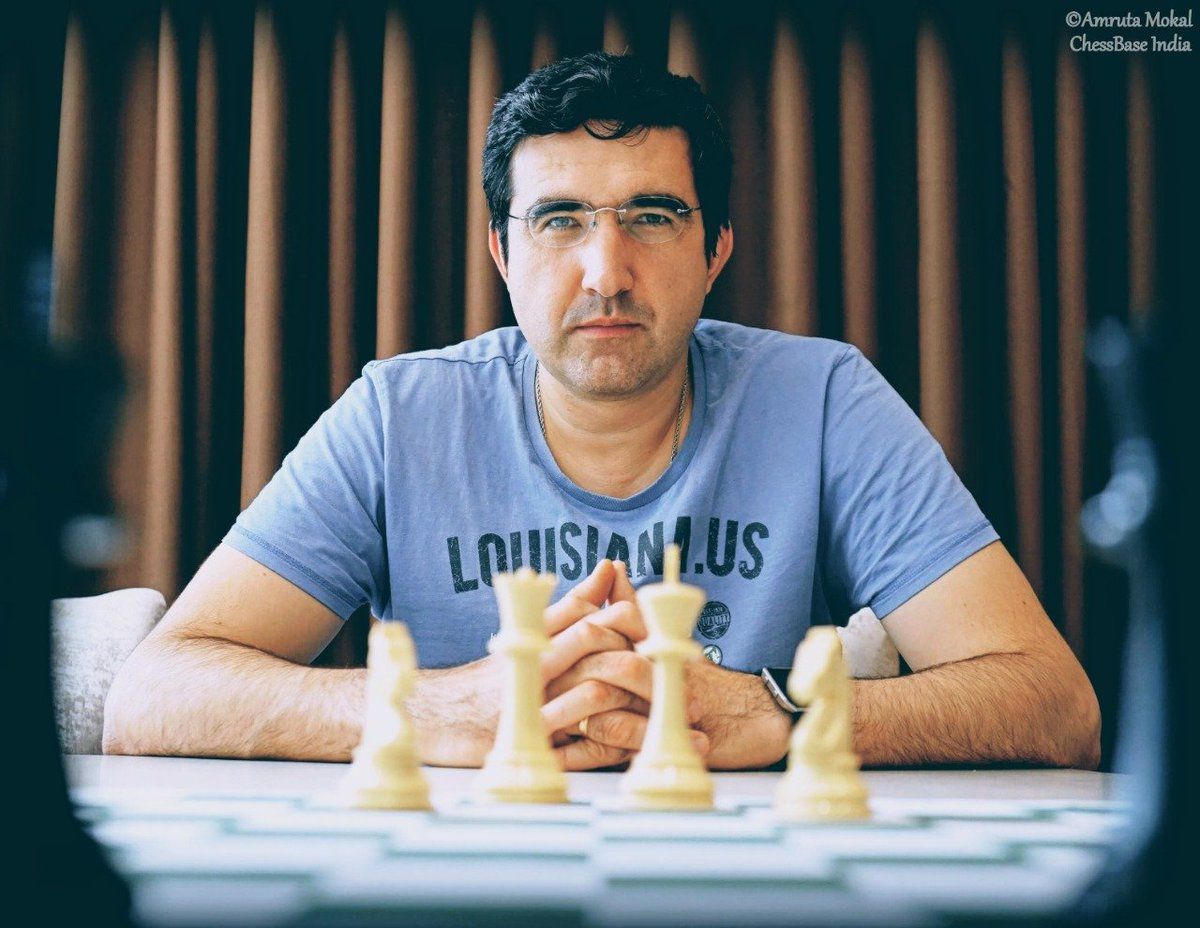 One of the biggest excitements for chess fans in this year's World Blitz championships is the comeback of Vladimir Kramnik. The 14th World Champion is going to come out from his retirement for a couple of days to play at the blitz event. We were curious to know as to how Vladimir would be preparing for this event. Would he be taking it for fun, as he had mentioned in his press release or would he working hard to be in the best possible shape? We decided to ask this question to his old friend and rival Peter Leko. 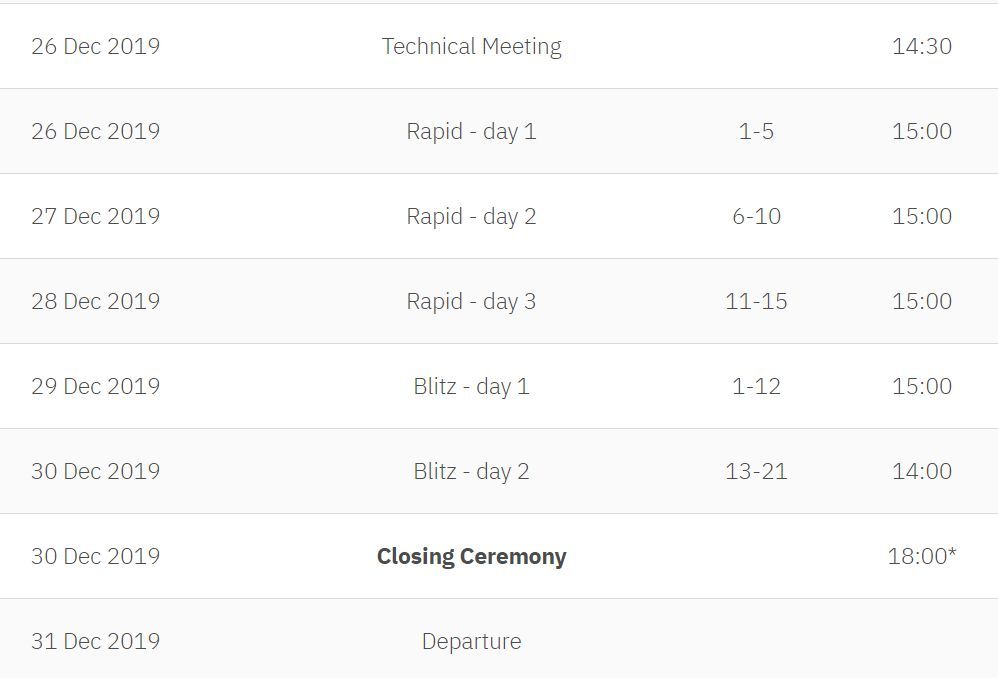 The Schedule of the entire event!
Related news: