For a man who is 48 years old playing at the World Rapid and Blitz is a huge challenge. You have to play 36 games (plus tiebreaks if you are fighting for the first spot) against some of the best players in the world, who are half your age, have loads of stamina and in general are better suited towards the short format of the game. The odds were against Vishy Anand, but he delivered! And he delivered huge! Two medals at the World Rapid and Blitz 2017 - gold in rapid and bronze in blitz! We spoke to Vishy Anand after his victory and, to put it mildly, he was ecstatic with his performance! 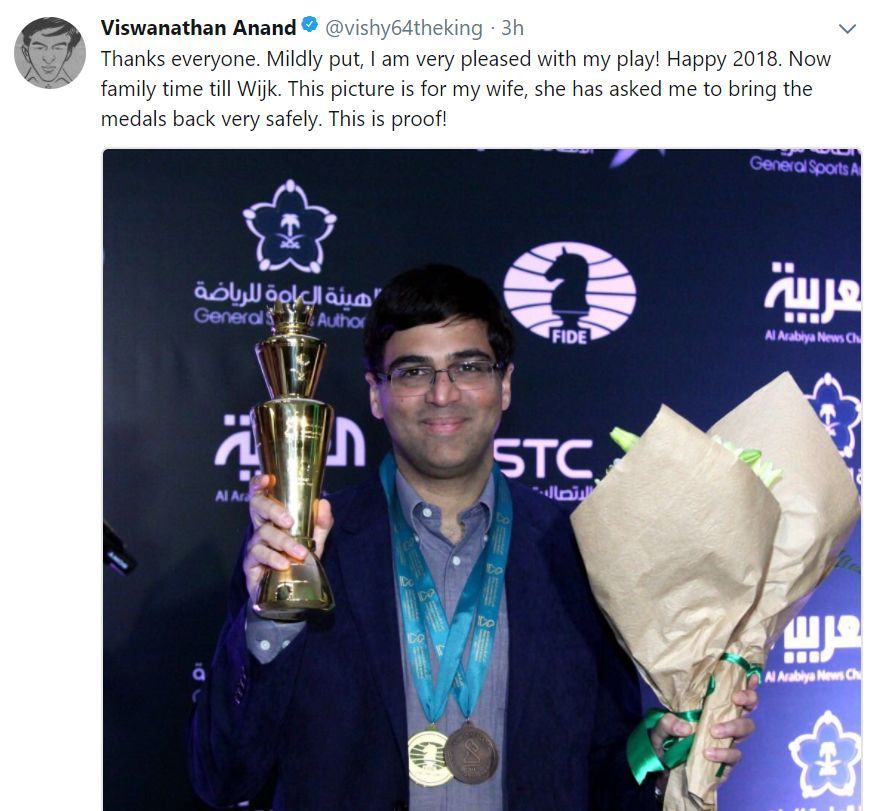 Anand's tweet after the closing ceremony on 30th of December!

We spoke to Vishy Anand after he won the World Rapid and Bronze at the blitz. We asked him about how it felt to win the gold medal and drama on the last day of the rapid and he tells us about the entire scene and the emotions that he experienced!

Transcript of the above audio:

"I just feel so happy. It's very very hard to even describe it. I showed in Dubai that I am capable of good performances. In all the previous World Rapid and Blitz that I played I hadn't come close to a first place. It didn't look like something that's going to get easier either.

First two days of rapid I had done extremely well, on the third day somehow in the beginning I started to go more slowly and I drew three games. Magnus had started winning games and it felt like slipping out of my grasp. In fact I was even wondering if I was going to have a podium finish. Luckily in the Grischuk game I was able to get a very good advantage and press. This meant that I could break free of the pack and join Magnus for the first place.

Bu (Xiangzhi) played ultra solid with white and took his draw. So this meant that I had to wait for Magnus. But I was philosophical about it. If Magnus won then he deserved to win, but I was trying to get ready for the tiebreak. After successive changes, first I thought I was going to play Magnus, very soon I understood that it would need a blunder from Grischuk for Magnus to win. First Nepomniachtchi and then Fedoseev caught up and I realized that my tiebreak opponent would actually be Fedoseev.

It all went very fast. The arbiter tell you that you have to play, you have a few minutes to compose yourself. It's all very chaotic. You cannot do much work. I played the two blitz games and I played them quite well. In the second game, when I was a piece up, I didn't need to give it back. But luckily my position was so good that even after that I was safe and I had my cushion. Just relieved and happy and this is a very nice way to enter 2018... Yeah! I am just very happy!" 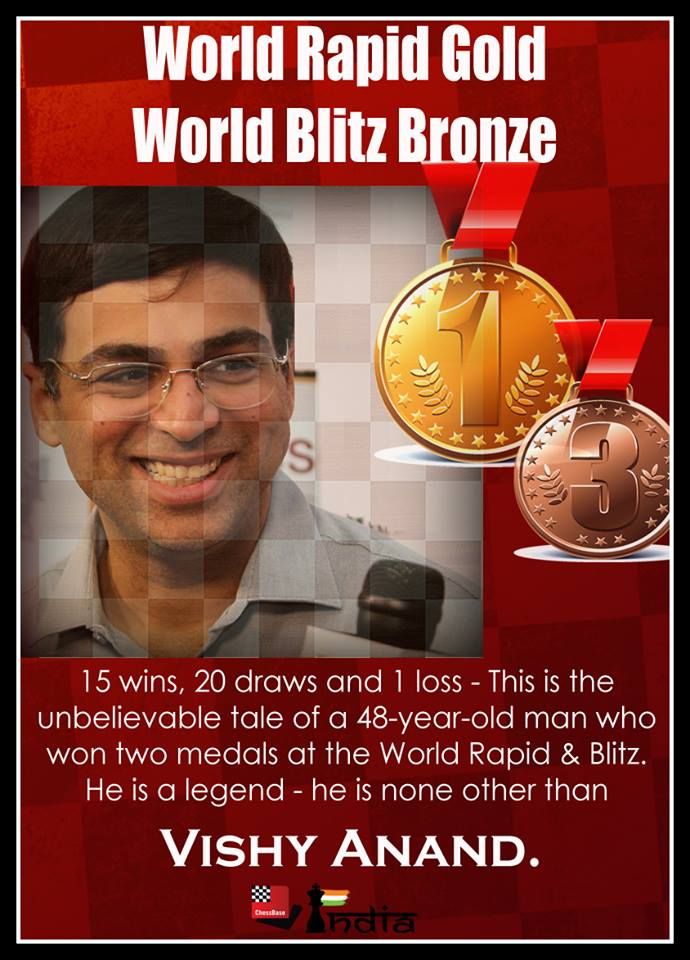 "Well what can I say! I am so happy that Anand can enjoy his chess. It gives him so much joy and pain. It's his determination that I admire. True courage is when failure doesn't rile you. It actually gives you a broader canvas to experiment. That's what he does. We are just looking forward to Anand coming back. Akhil is most excited to have him home." 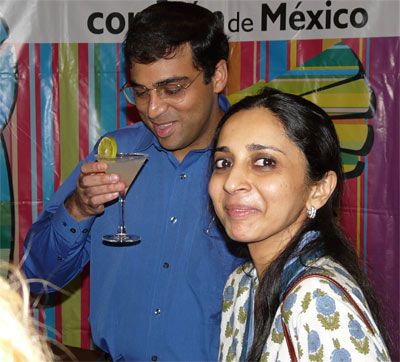 That's Aruna in 2007 when Anand won the Mexico World Championship! The excitement is still the same! | Photo: Frederic Friedel 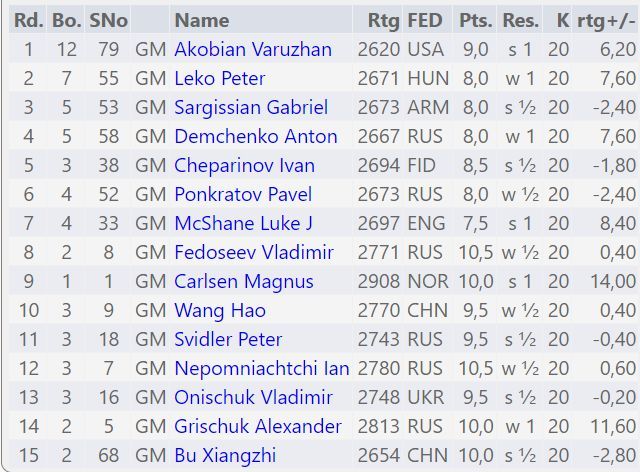 Unbeaten with wins over Akobian, Leko Demchenko, Mcshane, Carlsen(!!), and Grischuk. Not to forget 1.5-0.5 score against Fedoseev in blitz tiebreaks. 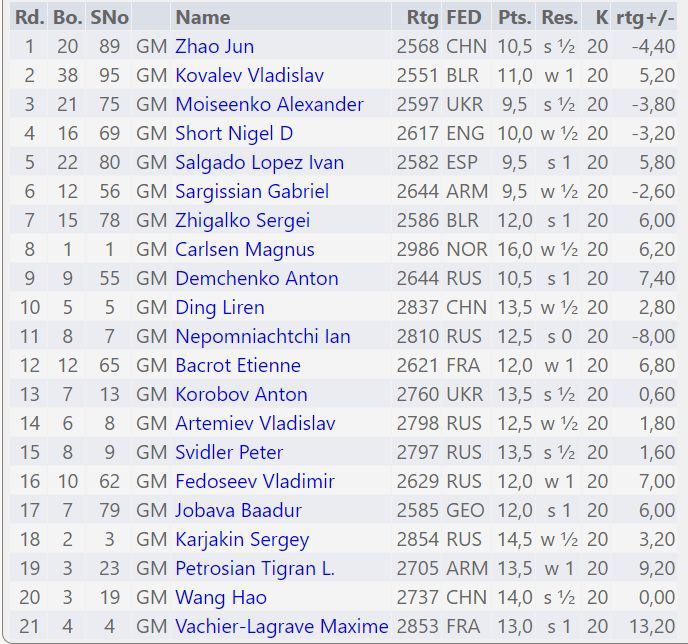 What does this win mean to us?

When Vishy Anand wins the world stops. Everything else doesn't matter. We (Amruta and I) were working at the Mount Litera school for the IIFLW tournament since morning 9 a.m. and we were tired by the evening, but when the news poured in that Vishy was winning, we left all our work to follow the games of this great champion and rejoice in his victory! I am sure many of the true Indian chess fans felt the same. Thanks Anand for inspiring a generation.

Here's the proof that we were celebrating Anand's victory post midnight:

Our Facebook post on Anand winning the World Rapid Championship 2017 broke all records. We got more than 4000 likes and 1800 shares!