The sixth round of Tata Steel Chess saw two more players join tournament lead in the Masters' segment: Magnus Carlsen and Anish Giri. In his sixth game, Magnus defeated GM Shakhriyar Mamedyarov after the latter messed up an equal endgame while Giri benefitted from an opening error of Jan Krzysztof  Duda and won his third black game. Meanwhile, both Vidit Gujrathi and Viswanathan Anand were held to short draws by Sam Shankland and Ian Nepomniachtchi. In the Challengers' group, Vladislav Kovalev took sole lead beating Dinara Saduakassova while R Praggnanandhaa split the point in his fifth straight game of the tournament against German IM Elizabeth Paehtz. Round 6 report.

Four at the top

Play resumed at the De Moriaan Community Centre in Wijk aan Zee, the main venue of Tata Steel Chess, following the chess on tour to Alkmaar and the subsequent rest day. As the sixth round came to a close, Magnus Carlsen, who had had a relatively slow start to the event with four draws in his opening games, scored his second straight win to join the tournament leaders. Anish Giri also recovered well from his first round loss and made his way back to the top. At 4.0/6, he has also joined the tournament lead scoring his third win of the event in the sixth round.

Carlsen’s second victim – after Jorden van Foreest in the previous round – was the second seed of the tournament, GM Shakhriyar Mamedyarov. The two top seeds had gone toe to toe for the most part in a Queen’s Gambit when the game turned sharp. 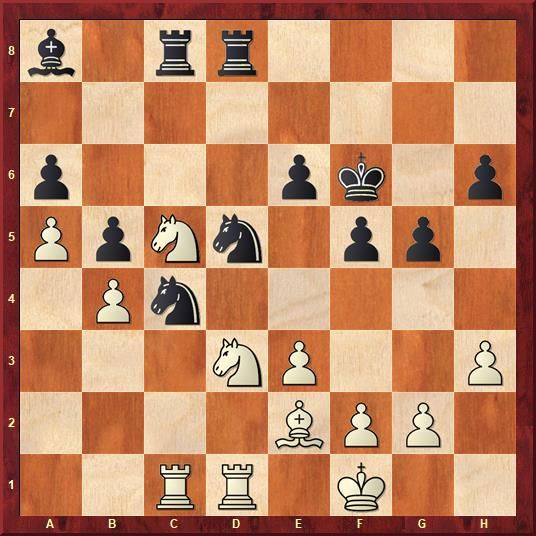 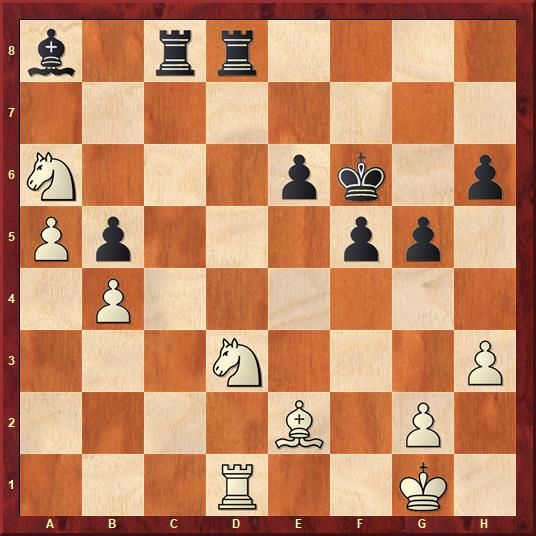 White’s little adventure of taking on a6 seems to have kept the game going but the computers adorn their evaluation with multiple zeroes at the first sight of it. Carlsen, too, said he did not really believe this would lead him anywhere. “I thought it was a draw,” Carlsen said after the game, talking about the diagrammed position and went on to add that Mamedyarov clearly lost the thread of the position.

For Anish Giri, the day wasn’t as tough. His opponent, GM Jan Krzysztof Duda had made an error early in the game and by the 20th move, was already in a lost position.

In the third decisive game of the day, Jorden van Foreest and Vladimir Fedoseev had played a very complicated Pirc defence. In the middle game, Fedoseev, who was playing black, seemed to be in complete command of the position. But Jorden played well and found enough counterplay to stay afloat. And soon the tide had turned. 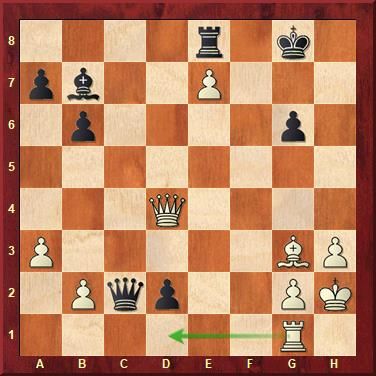 Just one move before the time control, Jorden found the brilliant 39.Rd1 here and went on to win an impressive game. “Yeah, it’s a nice move. I wasn’t even sure if it’s a good move. I just played it because I didn’t see anything else,” Jorden told Fiona Steil Antoni after the game, talking about his rook sacrifice.

Both of the Indians in the fray agreed to short draws in the sixth round. While Viswanathan Anand drew against the tournament leader Ian Nepomniachtchi, Vidit held the American GM Sam Shankland.

Anand, as he mentioned after the game, was caught by surprise in the opening by Nepomniachtchi, who had the black pieces in a Sicilian Najdorf.

“I had hopes for more out of the opening. Unfortunately, he caught me by surprise in a line that was quite rare – he told me that there were maybe seven games with it,” Anand said in the post-game interview.

After Nepomniachtchi’s 22…Kf8, Anand said he thought black was very comfortable and that he did not see anything more than an eventual repetition. 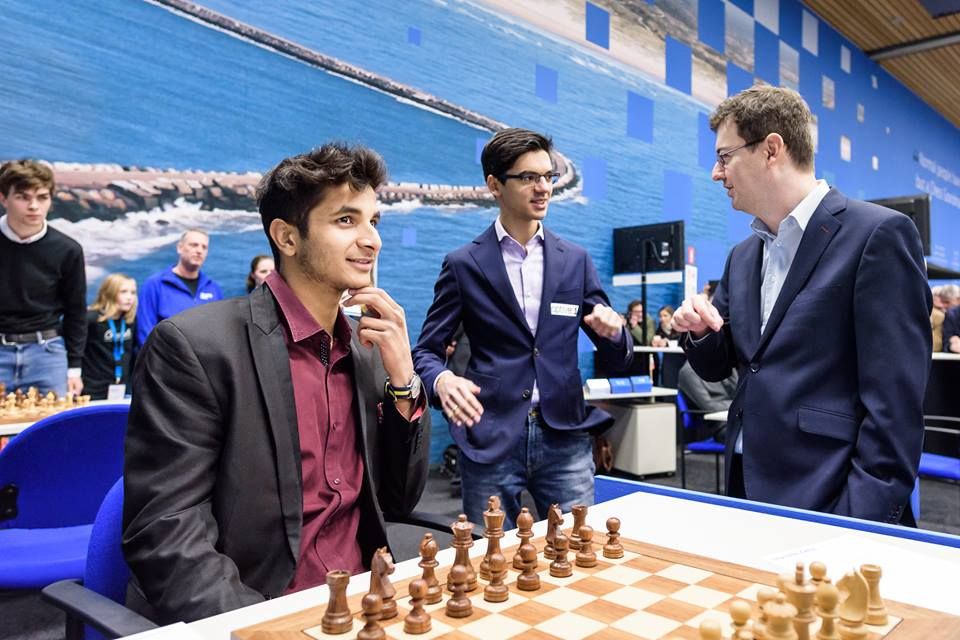 Vidit Gujrathi, who also had the white pieces in round six against Sam Shankland, decided to repeat the position after 18 moves | Photo: Alina L’ami

The Challengers group saw its first sole leader emerge after the sixth round as GM Vladislav Kovalev scored his third win in a row to reach 4.5/6. In round six, he was pitted against Kazakhstani International Master Dinara Saduakassova.

While the position out of the opening – a Petroff – did not look very promising, the Belarussian Grandmaster kept pressing to make something of his space advantage and succeeded after some errors by his opponent in the 69 move marathon. 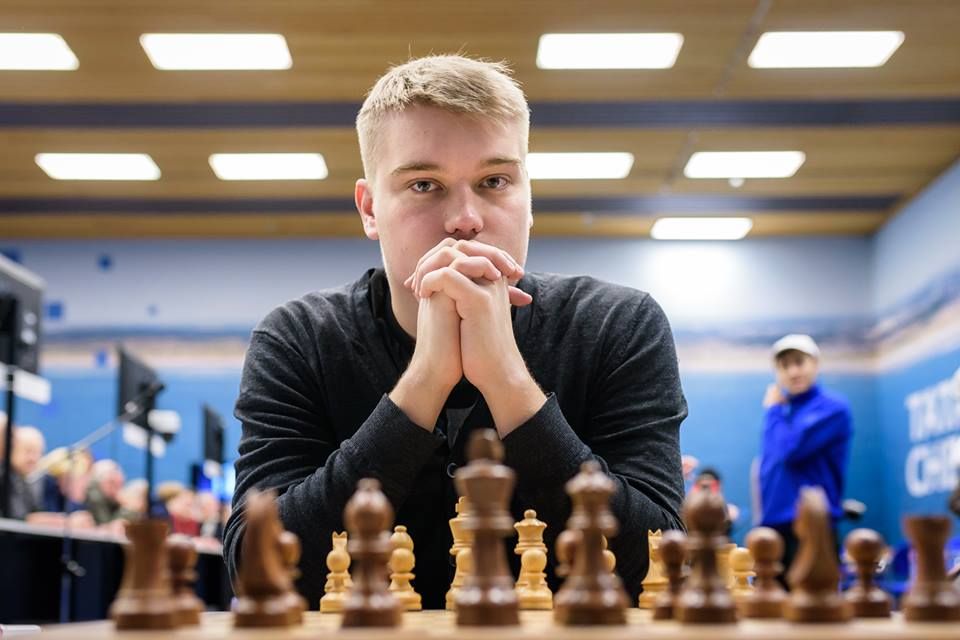 Vladislav Kovalev took sole lead in the Challengers with three back to back wins | Photo: Alina L'ami 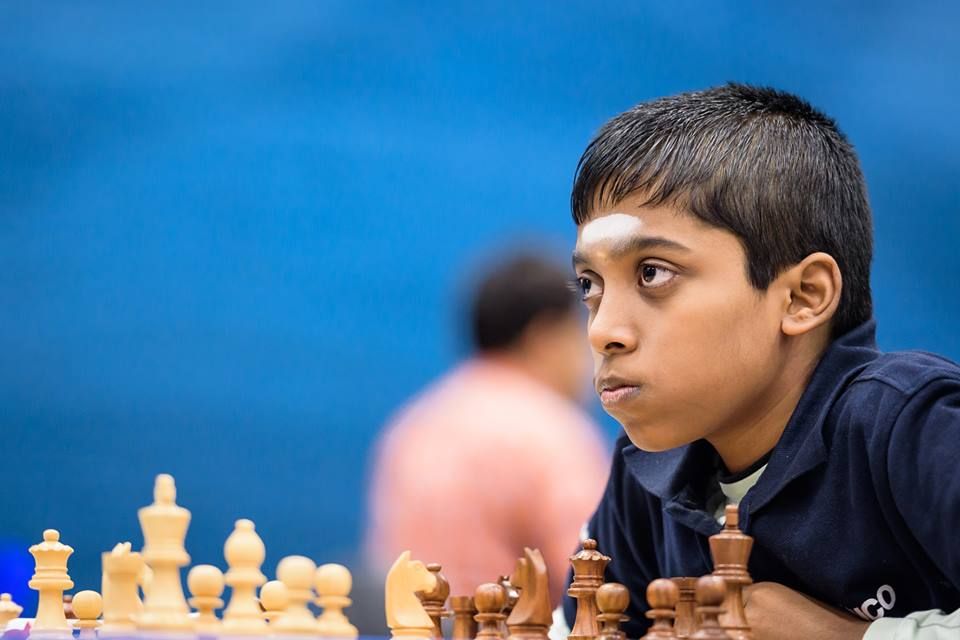