Thus far at the Altibox Norway Chess, Magnus Carlsen had been able to pull out a win in both of his white games. In round 5, he had the white pieces yet again. But Anand turned out to a tough customer to deal with. With the black pieces, Anand equalised almost effortlessly and by the 20th move, the position was a dead draw. Carlsen kept trying for another 25 moves but his efforts just hit a stone wall. Meanwhile, Fabiano Caruana played a fine attacking game against Sergey Karjakin to score his first win of the tournament. The other two games of the round ended in quick draws. An illustrated report.

Going into the fifth round of the Altibox Norway Chess, Magnus Carlsen managed to increase his lead to a full point yet again. But this time it wasn’t Carlsen who was responsible for this, but his world title challenger Fabiano Caruana. Caruana defeated Karjakin, the only player to have been within half point radius of Magnus, and, thereby, helped the world champ. Carlsen, in the meanwhile, could garner nothing more than equality against the solid play of Vishy Anand. Nevertheless, Carlsen felt that his play was “pretty bad”.

In the game, that had begun with the Symmetrical English Opening where Anand whipped out a novelty on his 13th turn. However, the former five-time world champion momentarily got cold feet after his opponent’s response. “For a second I thought I had blown it. Then I calmed down,” Anand said. 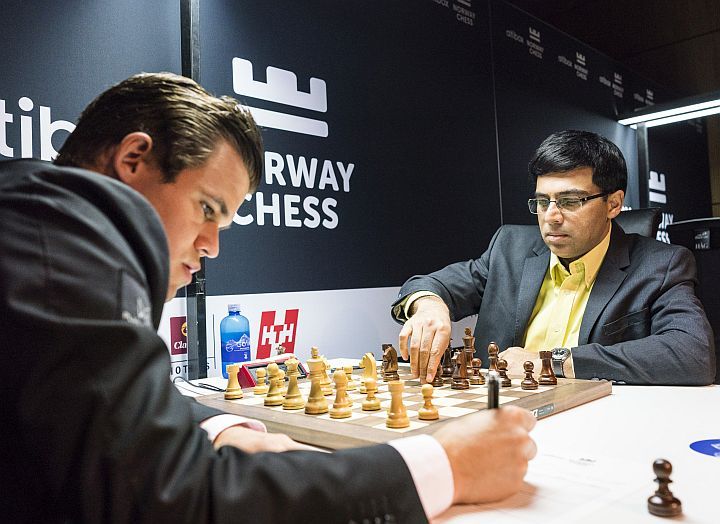 Anand was the first one to hold Carlsen with the black pieces in Norway. | Photo: Lennart Ootes

And as it turned out, there was nothing for Anand to worry about. After he had made a few precise moves, the game entered a dead-drawn endgame with almost symmetrical pawn structure. Players fought on for another 25 moves before signing peace, but the evaluation of the position never changed. 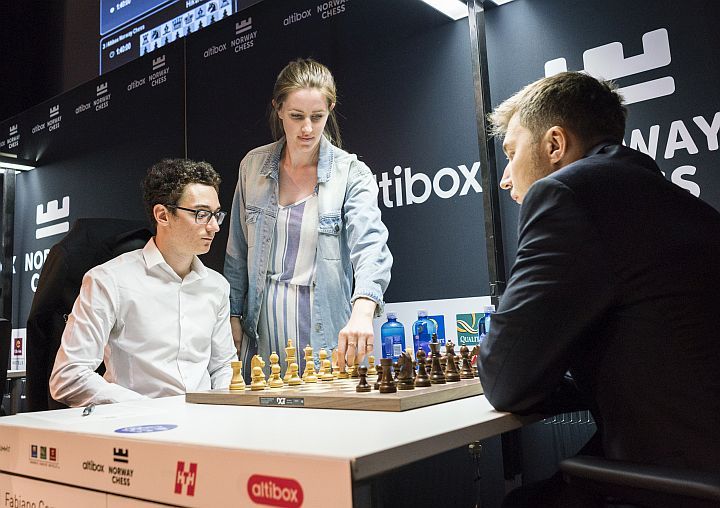 Caruana scored his first win of the tournament in round 5 | Photo: Lennart Ootes

The game between Caruana and Karjakin was also an English Opening, but this game featured the Four Knights variation of the opening. Caruana, who had the white pieces, played an interesting little novelty on his 10th move. In a few moves, Karjakin, quite surprisingly, gave his opponent the opportunity to exchange his bishop for Karjakin’s knight and shatter the Russian’s kingside structure. Immediately, a bishop sacrifice was in the air that could have ripped Karjakin’s king of its already damaged shelter. But Caruana felt his position was too good to gamble in such a manner.

Trying to hold his position that was falling apart, he tried to find a safe looking setup and began shuffling pieces. By the 35th move, Karjakin began to feel desperate and sacrificed a bishop to generate counter chances. The position was hopeless for Karjakin after this and the game barely lasted six more moves. 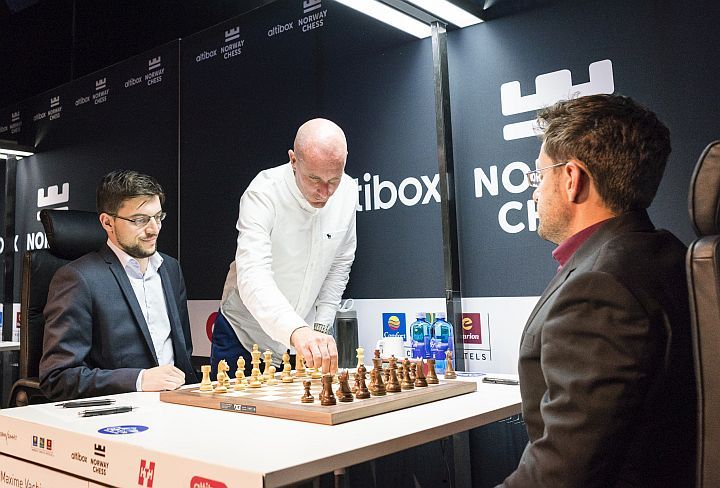 MVL mixed up some lines from his prep but was able to hold Aronian to a short draw | Photo: Lennart Ootes

The game between Vachier-Lagrave and Aronian was a downright miniature that lasted merely 25 moves. Aronian, who had the black pieces in the game, had come thoroughly prepared. Vachier-Lagrave, on the other hand, admitted having mixed up some lines in his preparation.

“I need to apologize to my helpers. It doesn’t matter if they do a good or a bad job if I don’t remember the lines which I had on my computer in the morning,” he said after the game.

By the 20th move, it was Aronian who had the slightly better position. He could have pushed on, but starting on move 23, the Armenian number one began to repeat the position. Having suffered a slight shock in the opening, Vachier-Lagrave saw no reason not to go with the flow. 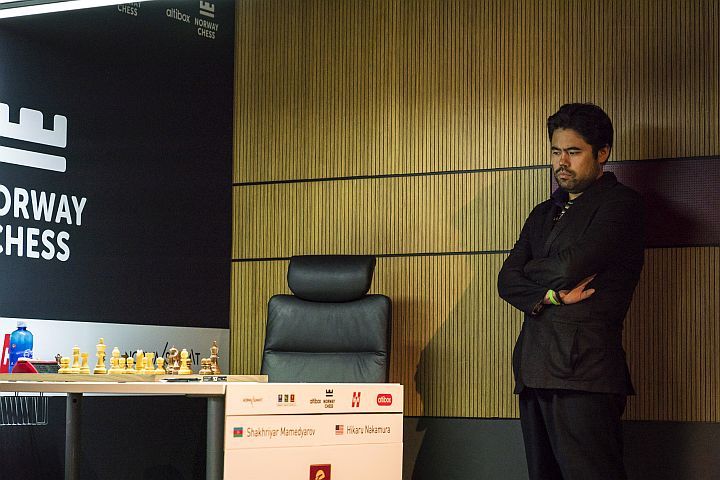 Nakamura was thoroughly prepared for his game against Shakhriyar Mamedyarov and was able to draw the game well within the first hour of play | Photo: Lennart Ootes

While Vachier-Lagrave’s game against Aronian lasted only 25 moves, it did go on for a good 90 minutes. Shakhriyar Mamedyarov and Hikaru Nakamura, on the other hand, shook hands to sign peace well within the first hour of play.

Nakamura had some preparation in the Classical line of the Nimzo-Indian defence which was played in the game. After the game, the American GM mentioned that he had prepared the line a couple of years ago for the Candidates’ tournament but never got to play it. But even though Nakamura had played a novelty, this was no unknown territory for Mamedyarov. He, too, had seen the line in his preparation and had no problems playing against it. 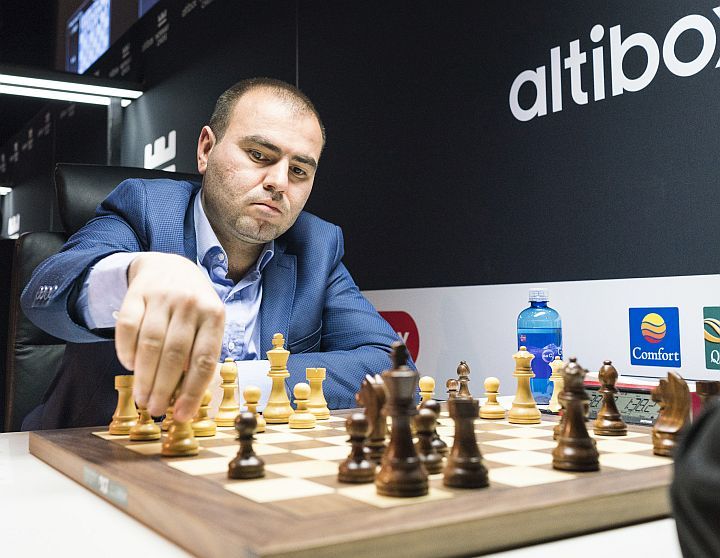 After Nakamura’s 17th move 17…Qxc5, Mamedyarov said that he understood that his opponent knew everything and, therefore, felt it was better for him to take a draw and get some extra sleep. He also said that the antibiotics he has been prescribed for his toothache (which was so bad at the start of the event that he was considering to withdraw from the tournament) are making him sleepy.

“I am sleeping all the time. The first days it was a big problem: I can’t sleep. But now I sleep too much,” he said.

The tournament standings now are a little complicated as some players have played more games than the others. Magnus Carlsen is leading the tournament by a full point but he has played a game more than some of the other participants. In his five games, Carlsen has scored 3½ points while Karjakin and Aronian share second place with 2½/5. Mamedyarov is the third player to have played five games and has scored 2/5. Anand, along with everyone except Vachier-Lagrave from the rest of the pack, has scored 2/4. Vachier-Lagrave, with his score of 1.5/4, remains at the bottom of the table.