In the seventh round of the Runavik Open 2017 Nihal Sarin demolished a 2372 rated IM in just 13 moves! With that victory he crossed the rating barrier of 2500 on the live rating list. For a boy who is just 13 years and four months old this is a phenomenal achievement. But we at ChessBase India are not surprised. This is because we had identified this talent exactly three years ago at the World Juniors 2014. What was so special about the 10-year-old boy? IM Sagar Shah tells us all about it in this article, with some never-seen-before videos and photos of Nihal Sarin.

In the year 2014 Amruta and I received our first major chess journalistic opportunity. It was the World Juniors 2014 held in Pune. I was writing alternate day reports for ChessBase and part of the official commentary team and Amruta was the official photographer. As a part of the reporting I would often enter the tournament hall and look around for something unusual or interesting that was happening. Once in the second round when I entered the arena, I saw a crowd gathered around a board. All the people were quite excited. But more than looking at the chess game, they were focusing on this 10-year-old boy who just wouldn't sit.

Moves came easily to this young boy from Kerala. And his confidence levels were simply off the charts. Even at the rating of just 2018 he was fighting against 2400+ rated players on equal footing. While his exploits over the board were impressive, it was nothing in front of his little cameo in the commentary room where he floored just about everyone with his chess erudition. So much so that IM V. Saravanan who was sitting there listening to him said, "Such talent is extremely rare." For years I would only tell people this story without any real proof, but yesterday when I was sifting through my World Junior files in the hard disk, I found this video I had captured of Nihal in the commentary room with WGM Swati Ghate. Just look at the way, the boy explains the game. And note his confidence when he speaks about the move Bg4 - "this was my opponent's only mistake!"

Nihal had this very unusual mixture of innocence combined with maturity. There would be one question where he would answer like a 10-year-old and then suddenly he would be this all knowing mature grown-up in the next one. This one was captured by Vijay Kumar when I was just speaking with the boy:

Pictures of the 10-year-old Nihal by Amruta Mokal 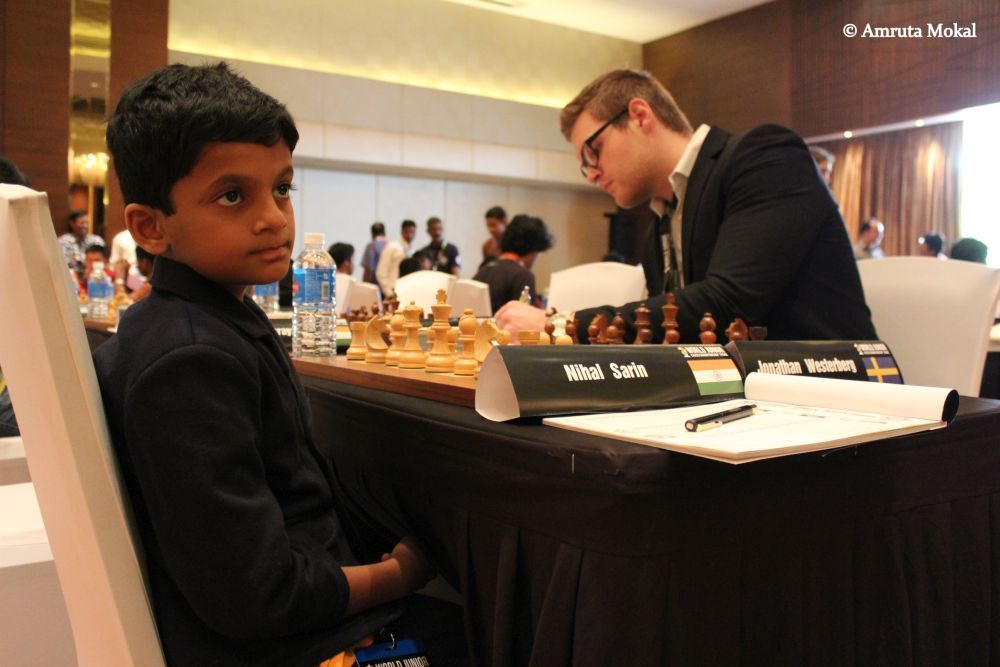 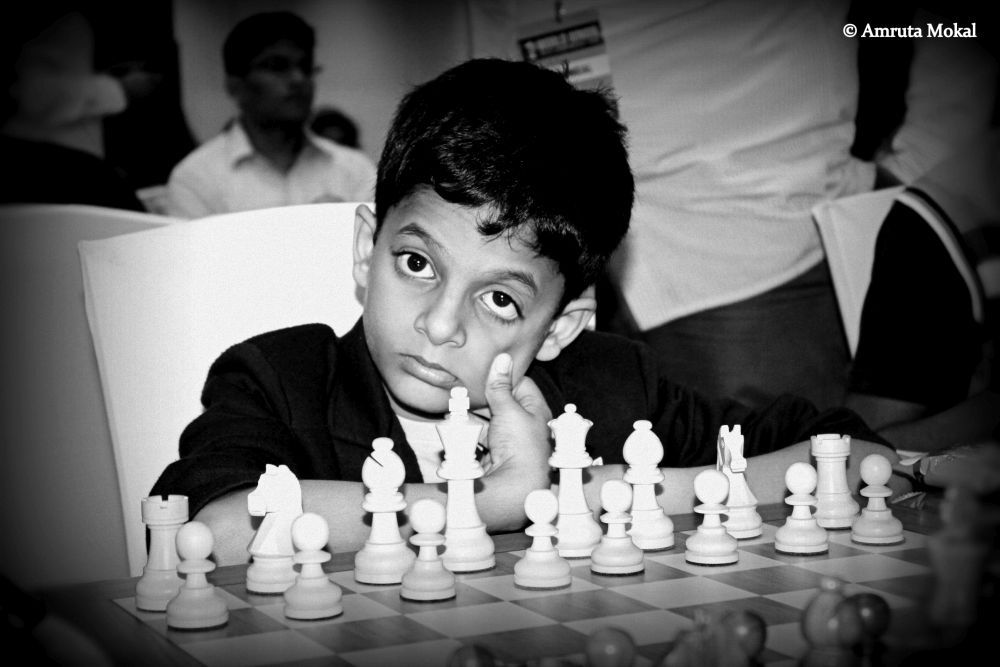 Yet Nihal never showed any signs of nervousness before the game! | Photo: Amruta Mokal 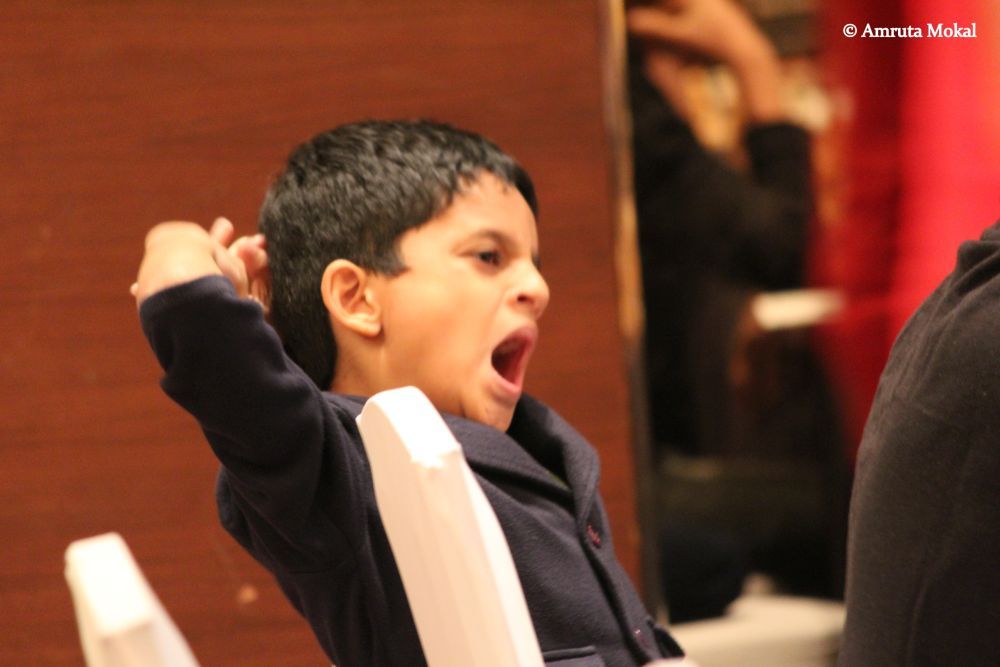 In fact most of the times he would be extremely relaxed! | Photo: Amruta Mokal 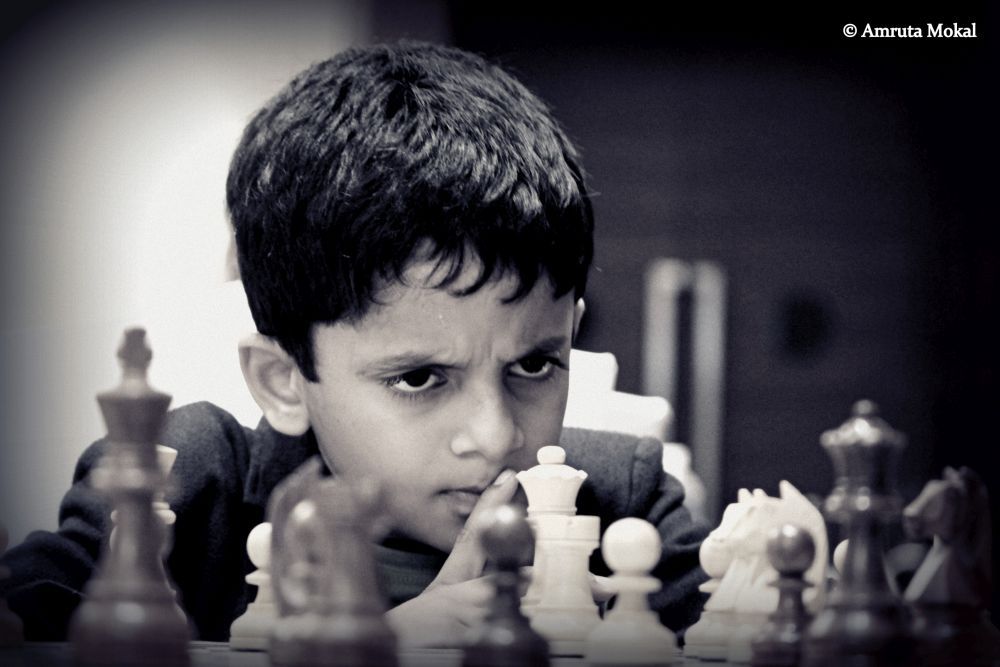 But when the moment was right Nihal would turn on his Kasparov like stare! | Photo: Amruta Mokal 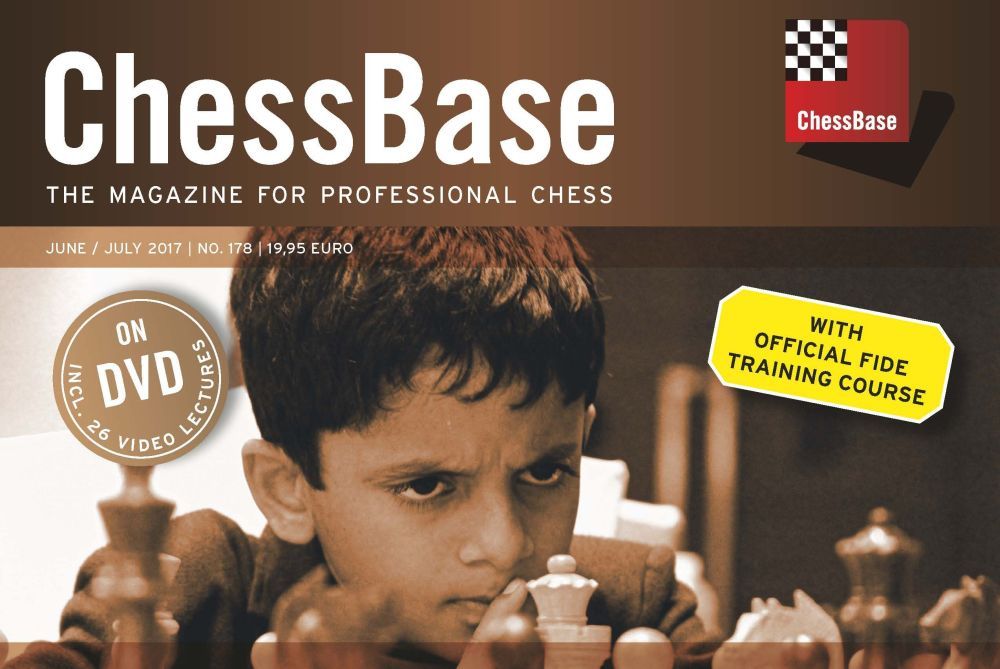 In fact the above image was also the cover photo of ChessBase Magazine 178! | Photo: Amruta Mokal 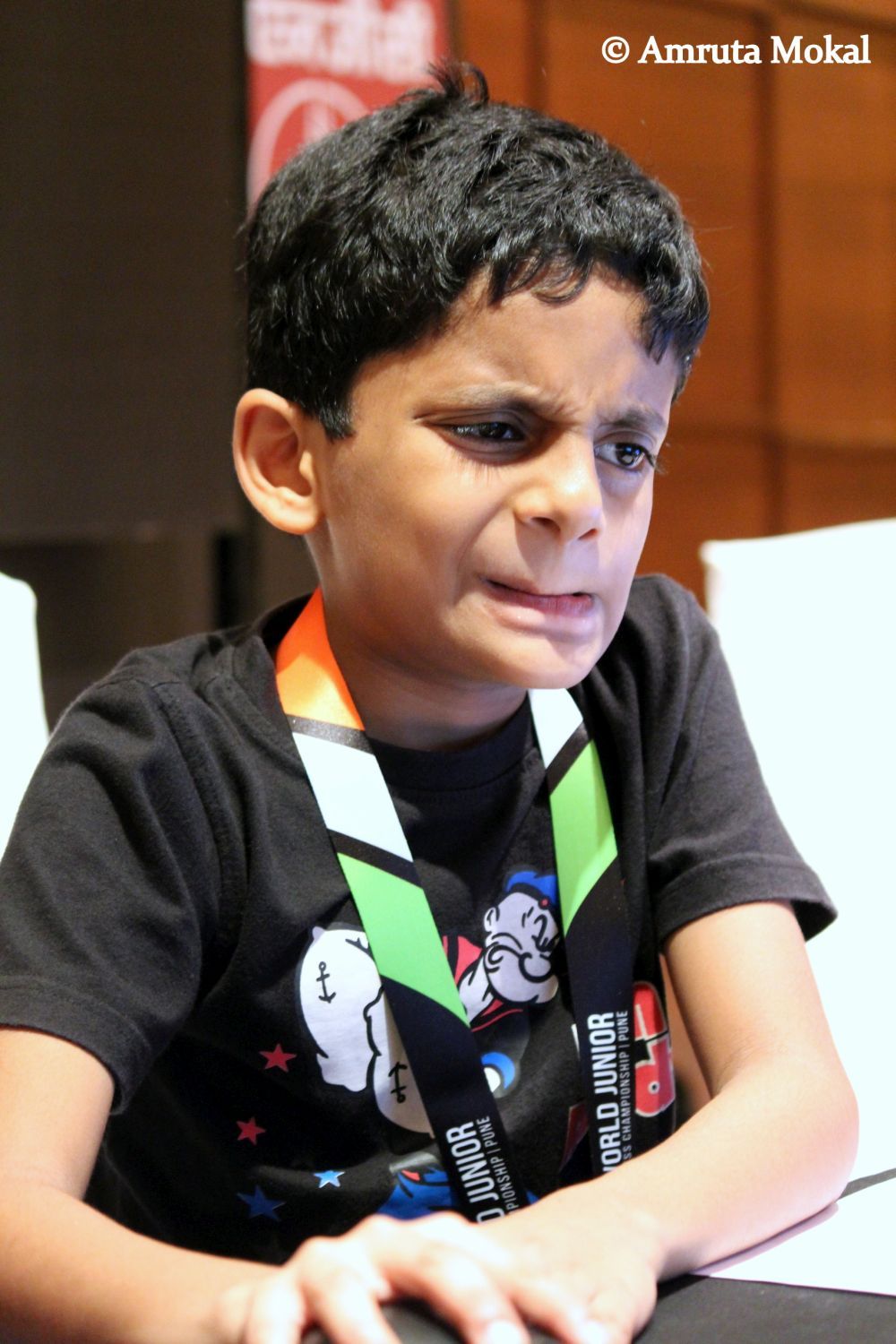 The little annotator in the commentary room! | Photo: Amruta Mokal 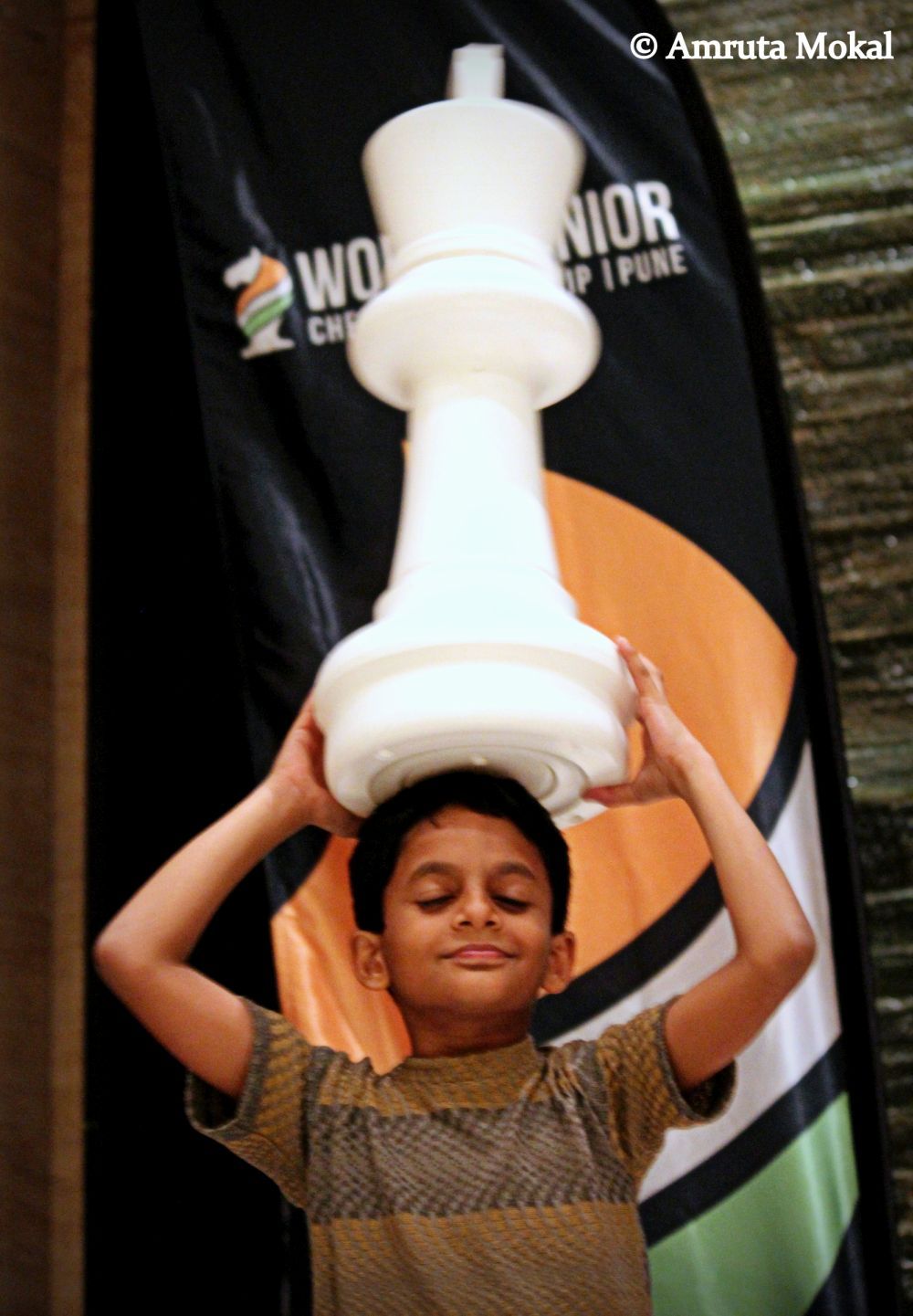 Sometimes when we would forget that he was just 10 years old, he would remind us of the same! | Photo: Amruta Mokal

Making your GM title involves four steps: you need to make three norms and you need to get your rating past the 2500 mark. Nihal who is currently 13 years and 4 months old has already completed two steps out of the four. He got his first GM norm at the Fagernes Open in April 2017 and now on 23rd of November he crossed 2500 Elo at the Runavik Open with a 13-move win over a 2372 rated International Master! 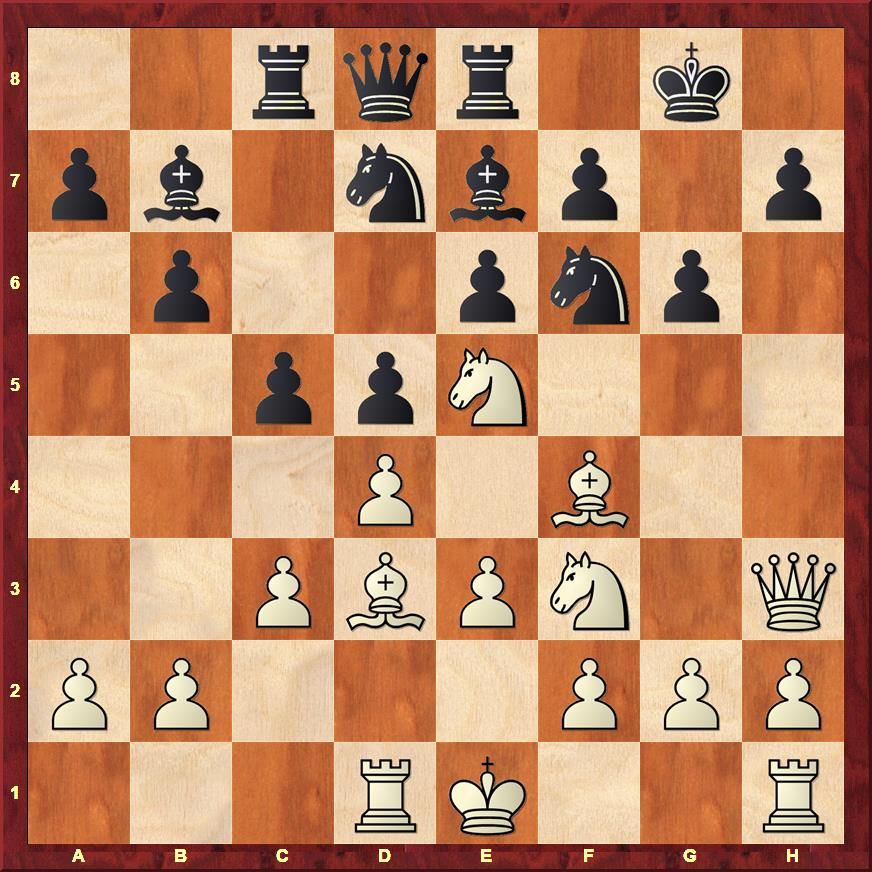 Nihal is white here. How did he make his opponent resign the game? 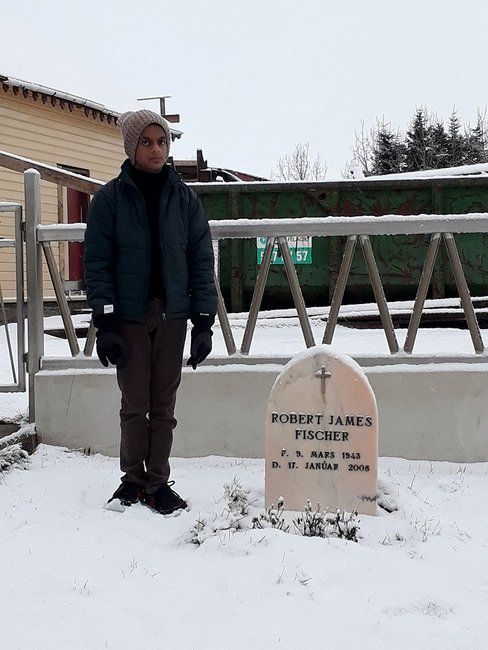 While being in Iceland, Nihal made sure that he visited Fischer's grave. The boy is sure to achieve similar heights as the eleventh World Champion! | Photo: Nihal Sarin

ChessBase India congratulates Nihal for this phenomenal achievement of reaching 2500 Elo at the age of 13 years and 4 months. We hope that he reaches the GM title soon. 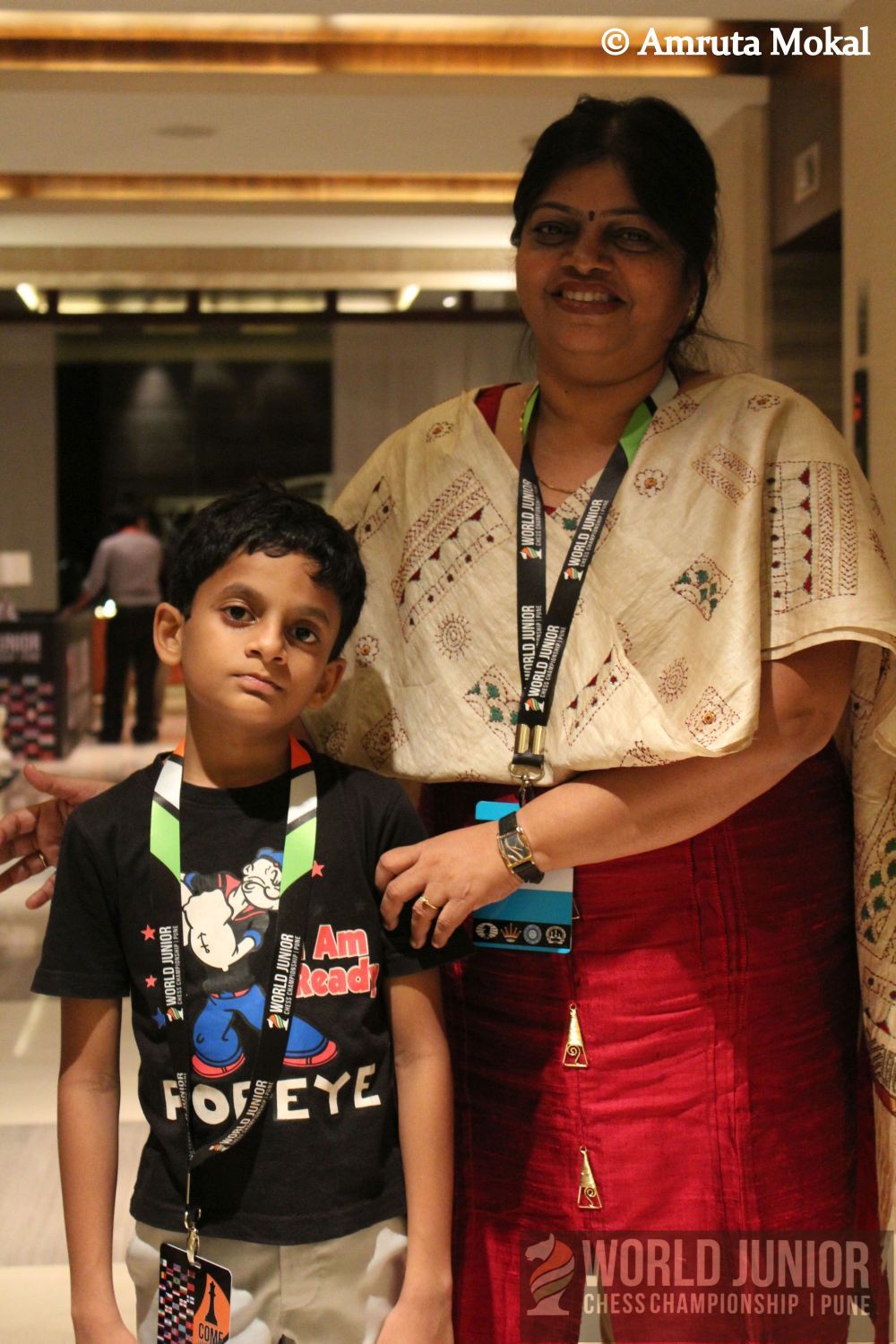 Experienced journalist Manisha Mohite has covered innumerable super tournaments and World Championship Matches of Anand. She has seen players like Sasikiran, Harikrishna, Ganguly and others grow up right in front of her eyes. When you see her asking Amruta to take a picture with Nihal so that some day after many years it would be a nice memory with a future super star, it surely means she had seen something special! And Manisha wasn't wrong!

Nihal solving a study (Many grandmasters are stunned seeing this!)