After four rounds, only two players have managed to retain a 4/4 score -- Arkadij Naiditsch and Wang Hao. While Naiditsch defeated Tregubov in round 4, Wang Hao drew blood out of stone in his game against Erwin L'ami to join Naiditsch in the lead. On the top board, Jeffery Xiong avoided the Najdorf against MVL and managed to sign the truce against the French number one. In one of the biggest upsets of the round, GM Abhijeet Gupta managed to bring down GM Le Quang Liem in a razor sharp Sicilian. Meanwhile, Vidit Gujrathi had no problems defeating Praggnanandhaa after the latter mishandled the opening. Vishy Anand also won his game against Shyam Sundar to score his second victory of the event. Round 4 report.

Wang Hao and Naiditsch come out on top

Of the six leaders, only Wang Hao and Arkadij Naiditsch won their games and remained on the maximum score of 4.0/4. Hot on their heels are Maxime Vachier-Lagrave, Radoslaw Wojtaszek, Richard Rapport, Vidit Gujrathi, Jeffery Xiong, Mircea-Emilian Parligras and Abhijeet Gupta.

On the top board, the American teenager, GM Jeffery Xiong carefully avoided going into the lines of the Sicilian Najdorf against Maxime Vachier-Lagrave. The Frenchman is a known expert on the line and has slain many a Grandmaster in it. Quite understandably, therefore, Xiong opted for a sideline, the Sicilian Rossolimo and induced an early queen exchange. The ensuing middle game saw players battle in a fairly balanced position until the 33rd move, before agreeing to a draw. 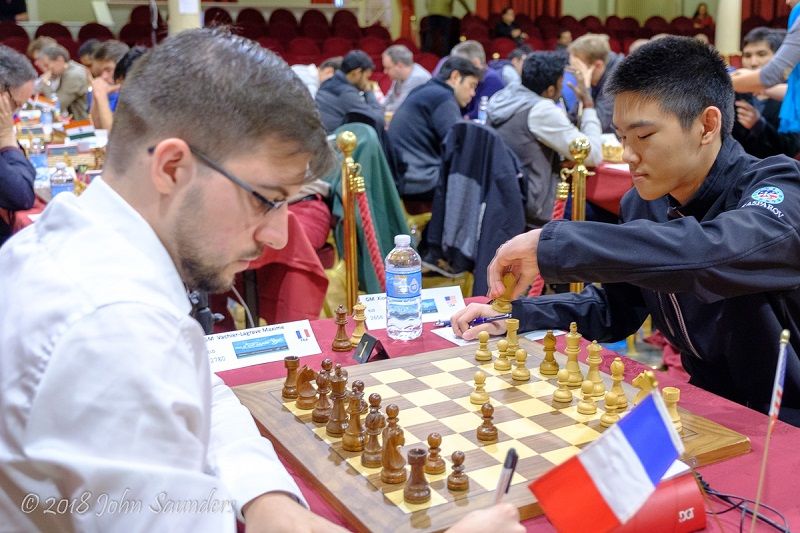 The other two games that featured the leaders also did not seem to hold much promise at the start. Wang Hao had a small but negligible edge over Erwin L’ami while Pavel Tregubov had managed to equalize against Aradij Naiditsch with the French Defence, the opening that has been quite in vogue on the top boards in this tournament.

The game between Naiditsch and Tregubov had begun with the Winawer variation of the French, a line which usually leads to extremely sharp positions. But then, this line had also been used quite successfully in the previous round by Sam Sevian against Levon Aronian.

Naiditsch deviated from Aronian’s chosen move order in the line on the 6th move but black still managed to equalize. But having ‘castled by hand’ Tregubov only had to ensure his king rook didn’t remain locked in on its home square. Once that was resolved, the position was just equal.

Naiditsch was still more active with his pieces, however, and tried to make something of this by manoeuvring his queen and rooks. Somewhere around here, Tregubov got into time trouble and began defending passively. Exploiting this, Naiditsch quickly switched wings and began posing threats on the kingside. Unable to defend against this, Tregubov was forced to resign on the 40th move.

“Somehow Black should be perfectly fine but Pavel did not find a way to get his Rh5 into the game...In the time trouble, he made it much easier to me than it should have been,” Naiditsch said after the game. 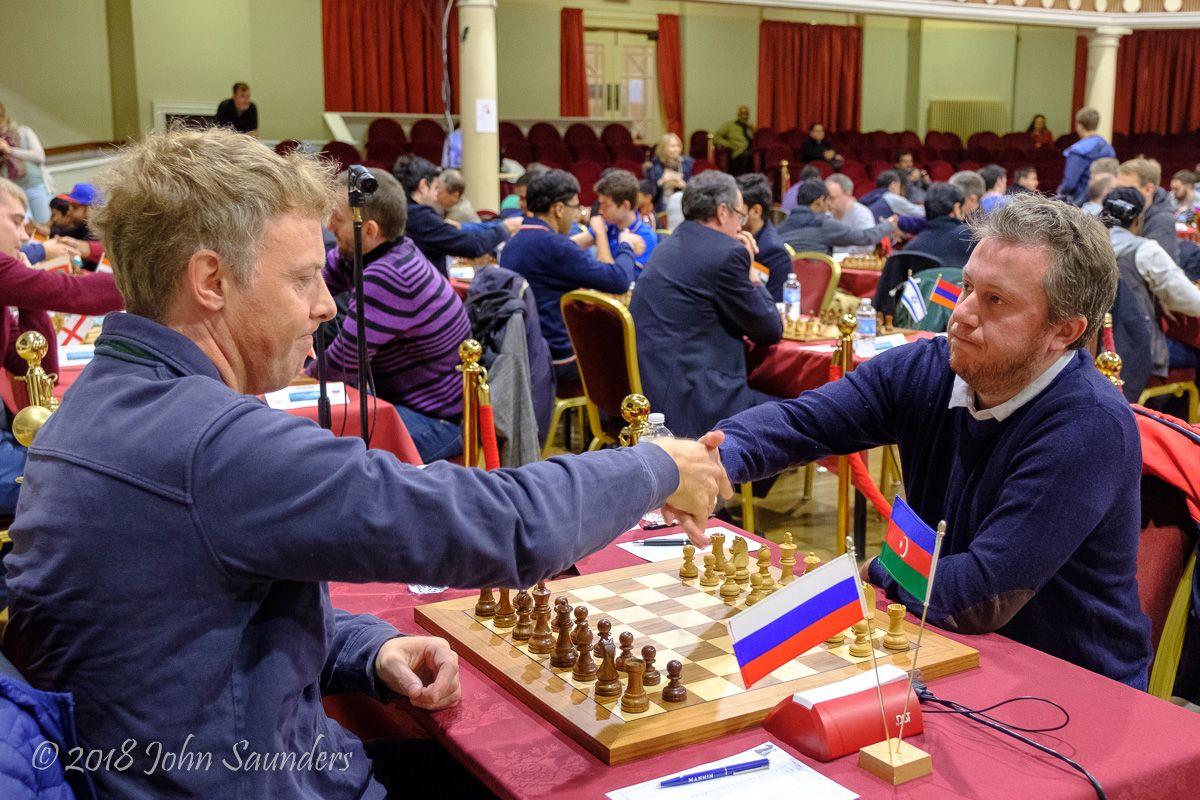 Wang Hao also exploited the passivity of his opponent’s position in his game against Erwin L’ami. The game had begun with an Anti-Berlin that eventually had begun to show the contours of an Italian Opening. But as is the case in both the Italian and the Berlin, the position had remained fairly balanced all the way through.

In the endgame, white had a very slim edge due to better activity of his pieces but black, on the other hand, had nothing to fear due to his solid – although slightly passive – position. What Wang Hao did have working in his favour was that he had no risk of losing in the position. He could have tried to ‘squeeze’ for as long as he wanted and then taken the draw if nothing worked.

On the 43rd move, L’ami cracked and made a tactical error that netted his opponent a pawn. This was all that was required for Wang, in addition to his positional edge. The game wrapped up in the Chinese Grandmaster’s favour in just seven more moves after this. 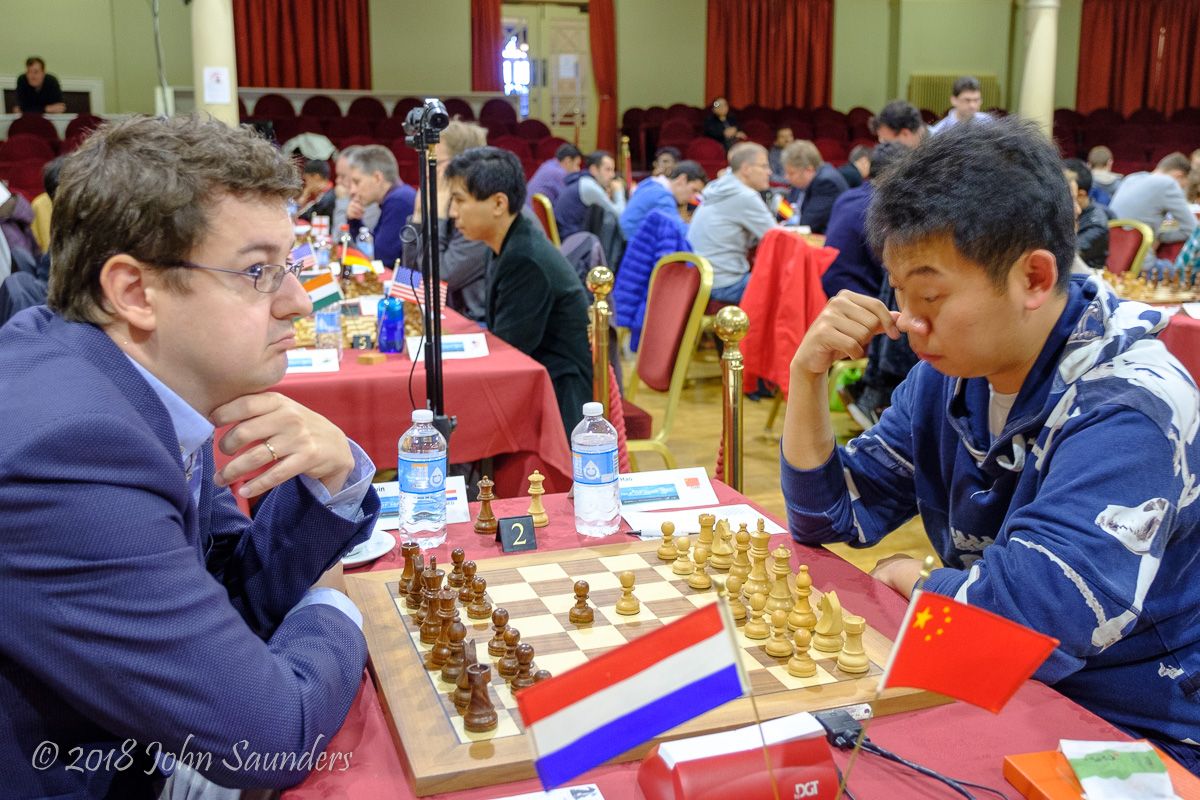 Wang Hao drew water out of stone in his game against Erwin L'ami | Photo: John Saunders

Both players did not shy away from a high-power theoretical game. In the Sicilian Richter-Rauzer, Gupta went for broke in a complicated middle game, trying to generate an attack on the enemy king. After several ups and downs, the game finally liquidated to a rook and minor piece endgame on his 36th turn and remained with an extra pawn. The endgame went on until the 60th move of the game before Gupta had finally managed to force resignation. 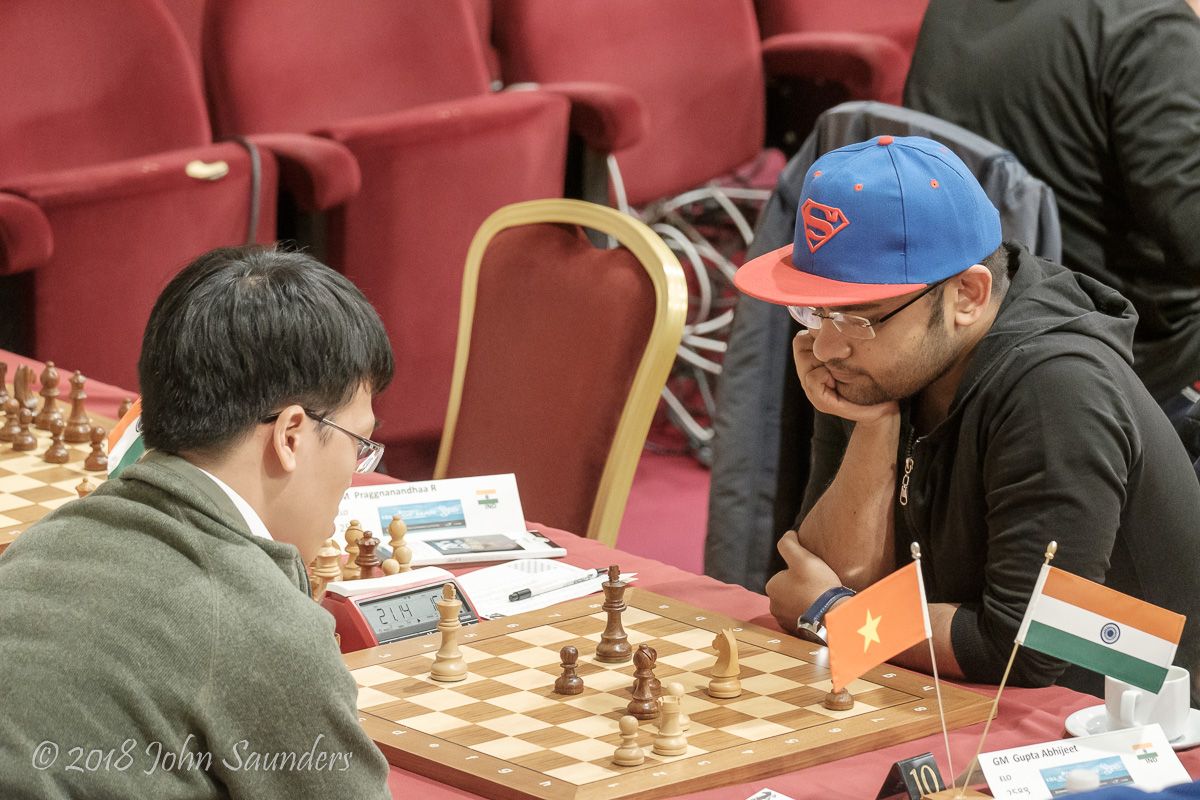 After two back to back draws, GM Viswanathan Anand finally won his second game of the event against his young compatriot, GM Shyam Sundar. With the black pieces, Shyam Sundar had essayed the aggressive and relatively rare Schliemann variation of the Ruy Lopez. Anand, however, was hardly surprised by his opponent’s opening choice. Getting a clearly better position out of the opening, Anand had reached a winning position after some skirmishes on the queenside. By the 25th move, black’s entire queenside had shattered and in a dozen more moves, Anand had forced resignation. 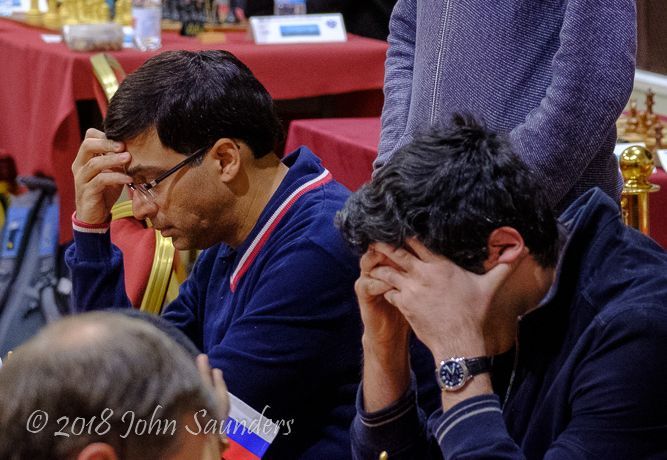 Anand and Kramnik both won their fourth round games and have decided to take half point byes in round 5 | Photo: John Saunders

The other all Indian encounter between Vidit Gujrathi and R Praggnanandhaa ended with a win for the former. In a Catalan Defence, Praggananandhaa mishandled the opening with the black pieces and ended up in a much worse position quite early out of the opening. Trading queens, Vidit quickly won a pawn and had no problems converting.

“After that, it was just suffering for him,” Vidit said, talking about the position after the queen trade on the 15th move. 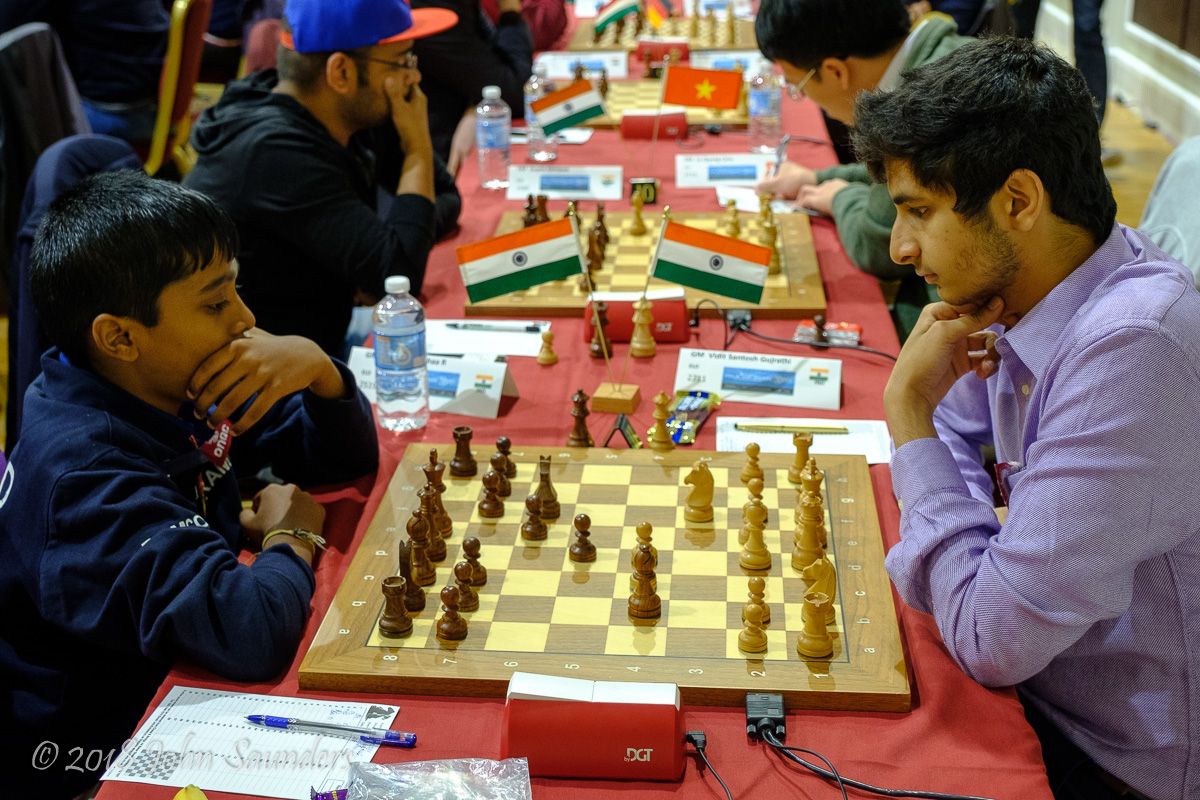 Pragg's opening error cost him the game in round 4 against Vidit Gujrathi | Photo: John Saunders

The fifth round of the tournament will feature a clash between the two leaders of the tournament, Wang Hao and Arkadij Naiditsch. Vidit Gujrathi will face his fourth straight Indian opponent of the event in Abhijeet Gupta on board four. The two are currently sharing the second place with 3.5/5.

Another important detail of round 5 is that Vishy Anand has decided to take a half point bye. As per the rules of the tournament, players are allowed to take one half point bye in any of the first eight rounds of the event.  Anand isn’t the only one, however, to take this bye in the middle of the event. Seven other players have done the same. Some of the top names include Vladimir Kramnik, Radoslaw Wojtaszek, Peter Leko and former women’s world champion, Alexandra Kosteniuk. 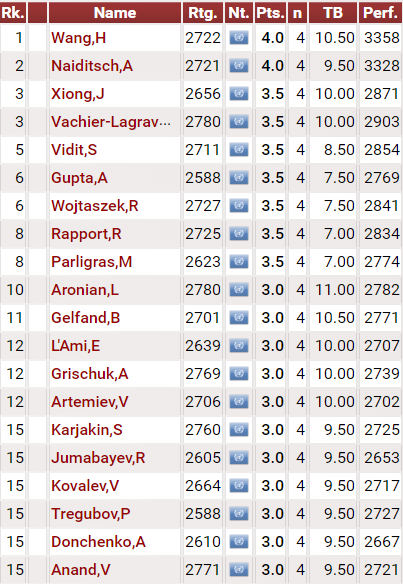