Bhakti Kulkarni - the national champion with an adorable smile and killer moves!

She is most of the times smiling! A friendly, warm-hearted and kind person. These would be the right words to describe WGM Bhakti Kulkarni. But don't the good guys always finish last? Well, Bhakti is an exception. With her immense self belief and determination, she has been able to achieve some fantastic results in the year 2018, the biggest one being crowned as the National Champion of India. ChessBase India reached out to Bhakti for an exclusive interview in which she speaks about not only her National Championship but also her first World Championship appearance in Russia earlier this year. Interviews with Bhakti are always insightful and refreshing because she never holds anything back. This one is no exception!

Bhakti Kulkarni has been having a very eventful year in 2018. She achieved her third IM norm, making her an IM elect. She now only has to reach an Elo threshold of 2400 to complete her IM title. She played her first World Championship in Khanty Mansiysk, Russia. Although she was knocked out in the first round against Natalija Pogonina, the experience which she gained will be invaluable in her chess career. In November 2018, she won an extremely tense national championship 2018, giving her the national women's title for the first time in her chess career. This was the first time India had a unified national championship (instead of National Challengers and Premier, there was only one!) and Bhakti managed to take home the trophies and a cash prize of Rs.4,00,000. 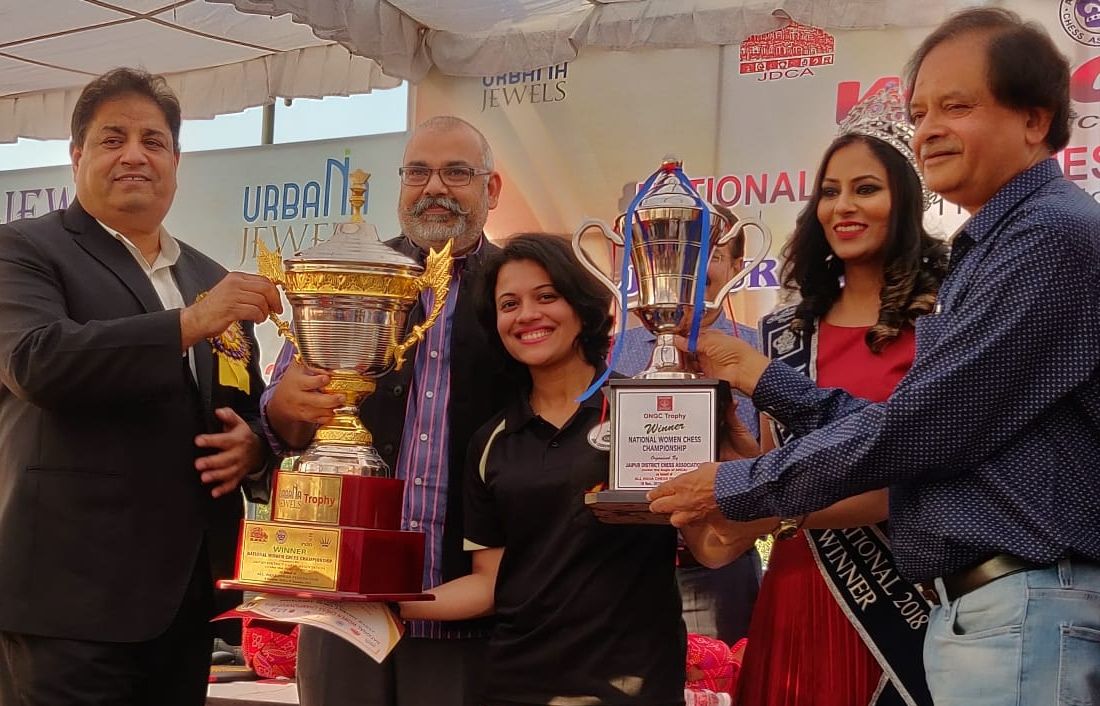 Bhakti with two trophies at the end of National Championships which ended in Jaipur in November 2018 | Photo: Nisha Mohota

SS: In 2017 you had missed the national title by a whisker. How does it feel to become the champion this year?

BK: I had missed it by a whisker not once but twice! Both times I drew the last round in a winning position and then stood second. Whatever I missed by a whisker, I achieved by a whisker! It was the most dramatic of all the Nationals I have played so far. Nerves played a big part. I am happy now and raring to go. Sagar, you yourself had said during the prize distribution function of last Nationals at Surat that Bhakti is No.2 now and she may be Champion next year or something like that! Your words came to be true.

SS: My forecast did turn out to be correct! How was the competition this year?

BK: I feel that Nationals are played more on nerves than your chess playing ability. How can there be so many upsets only in the Nationals? So, National is always tough.Thank God there is only one this year onwards! (laughs).

The competition was really tough. Everyone was fighting. We higher seeds are always in danger. Once Karpov had said that he found a major shift in his opponents' mindset  after he became the World Champion. The opponent may be in bad form and may be losing all his games quickly but against the World Champion, he gives his best. Our players may be lower rated but they are not less talented than us. They give hell of a fight to poor (!) higher rated us.

We missed Padmini and Soumya this year but there were others like Vijayalakshmi, Mahalakshmi who were not present last year. 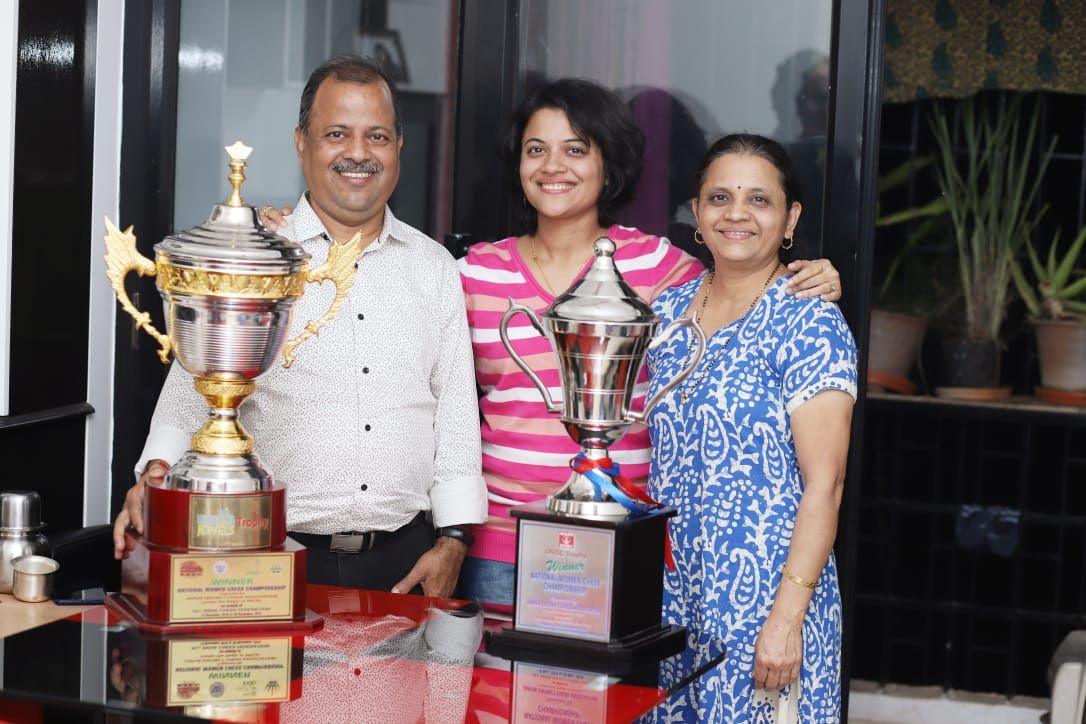 Bhakti with her proud parents!

SS: Did it feel any different that there is going to be only one national championship this year and not two - national Challengers and Premier?

BK: Once Botvinnik said that playing a World Championship match takes away 10 years of a person's life because of the stress. I feel that stress-wise our Nationals are not far behind! So I welcome the change.

SS: How happy are you with the quality of your play?

BK: Not much. I was terrible with Black. I was minus with Priyanka Kumari who was in great form. I lost to Mary and almost lost to  Saranya. My only consolation was to beat Nisha from Black but she tried too hard to win.So it was not my credit. However my play with White was very good. I missed quick win against Michelle but I managed to beat Swati, surprisingly easily. 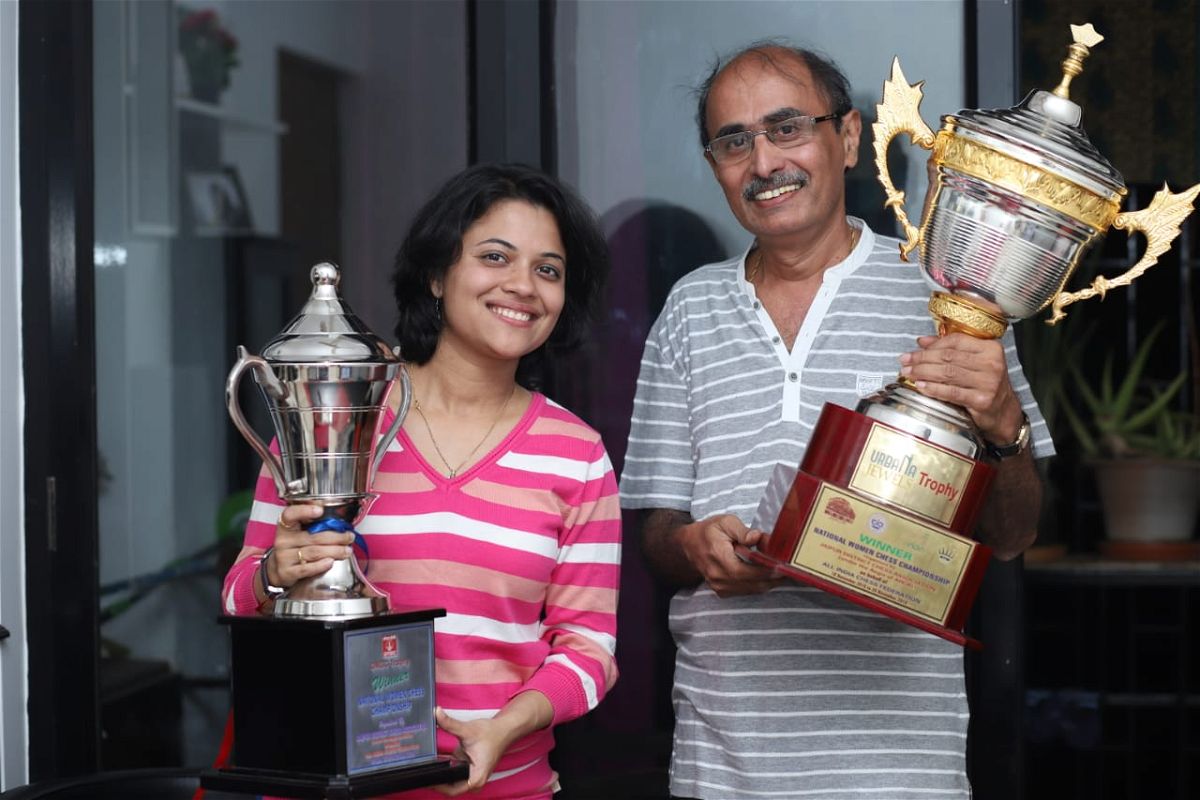 Bhakti shares her joy with her very close uncle Sanjay Prabhudesai, who is like father to her

SS: Which was your favourite game from the tournament?

BK: I played well against Swati Ghate. My Queen ending against Michelle and Queen sacrifice against Mahalakshmi were both good.

SS: Everything was really going well in the tournament for you until your loss to Mary. What happened in that game?

BK: I don't know. Perhaps I was bogged down by the occasion. I landed in time trouble which I try to avoid nowadays. And also played listlessly. But I should not take credit away from  Mary who played great in complications.

SS: Tell us a bit about the last round tension. You were completely lost. How did you manage to fight back?

BK: I must mention psychological preparation before this Nationals. Anupama madam (Anupama Gokhale, 5-time National Woman Champion) taught me how to deal with expectations and how to deal with people before the rounds. She has done counselling in the past and is an expert on this subject. It was great help to me. 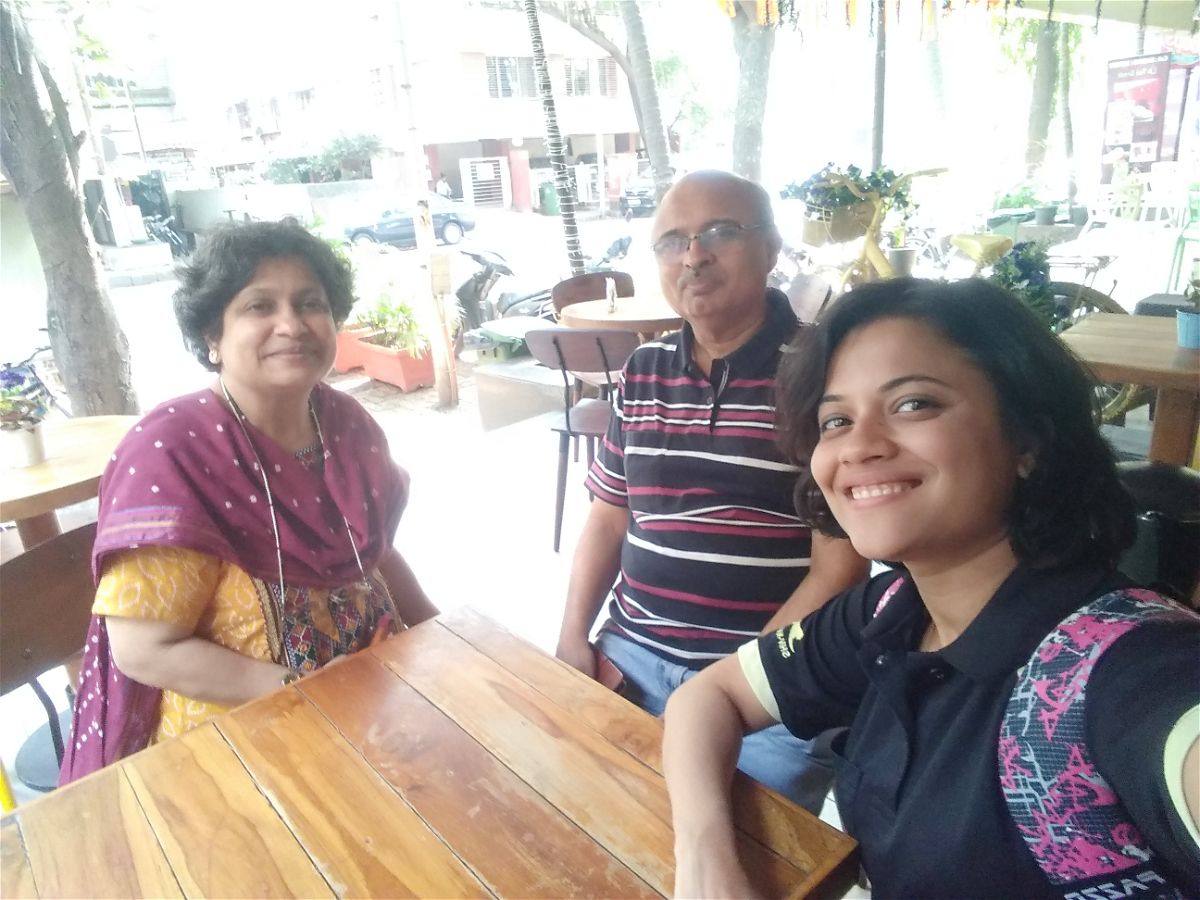 Will anyone believe that my piece offer was not a blunder but a miscalculated desperation? In the opening I forgot to play Ba7 and then Saranya's strong center robbed me of any play. I understood that if I just play on, she will have easy time beating me. So I decided to try a piece sac. Anyway I thought that her King was in the center and pieces scattered. So I just gave up the piece and then she played 0-0. Oh God! I said and was left with no option but to fight- with whatever I had. Saranya was playing well until she smelled victory. Once she had the better position she started to hesitate. Rest is history!

SS: You won Rs.4 lakh for becoming the national champion! How happy are you with the prize fund?

BK: I am quiet happy to be the highest paid player in the history of  Indian Nationals! At least untill the Men's Champion will overtake me in a few days!

SS: Tell us a bit about the organization of the event? Did you enjoy your stay and Rajasthani food?

BK: The organisation was superb. I am saying this not because I won at Jaipur but everybody had the same opinion. I even sang a song at the cultural program arranged for chess players. Food was good too. And I must mention my flatmates Nisha di and Mary di. They were so sporting. Their outlook towards life is also inspiring. Wish I have them as my room mates often. 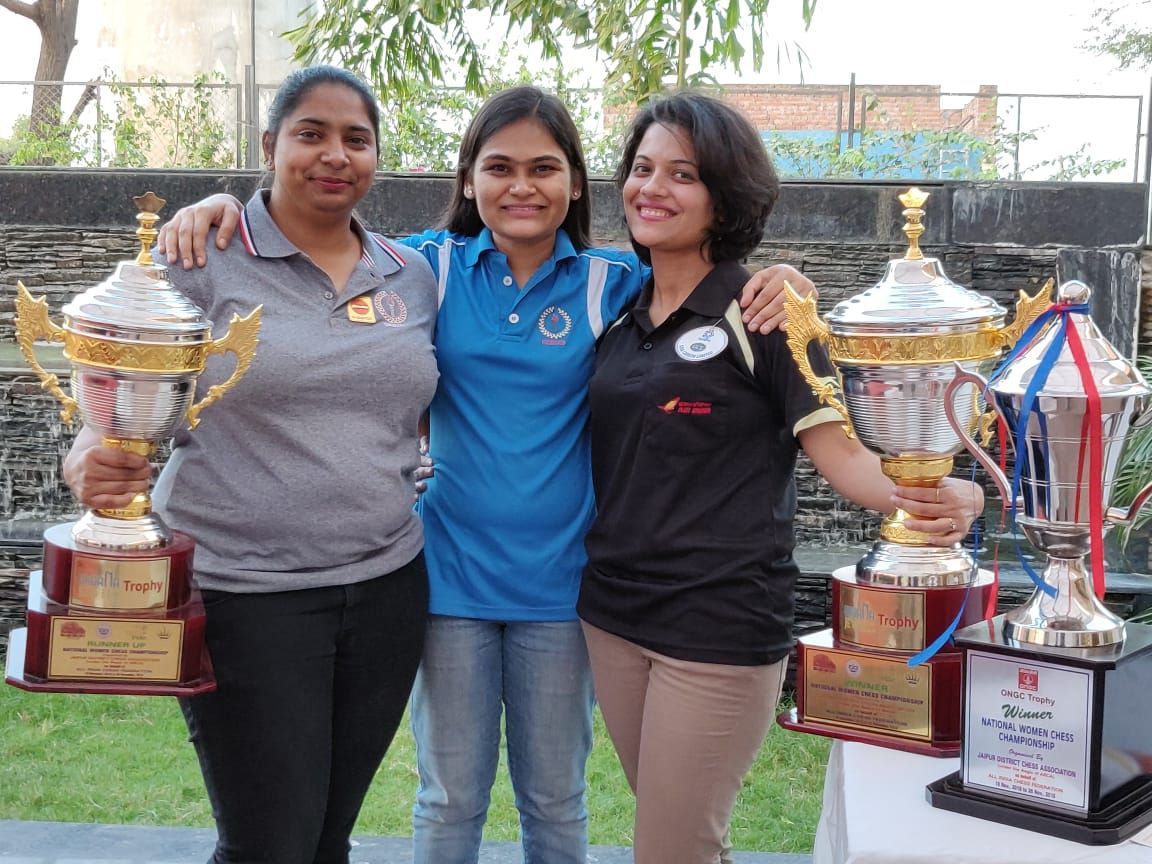 Competitors on the board, friends off it! It's so nice to see the top woman players of our country sharing such excellent camaraderie with each other! 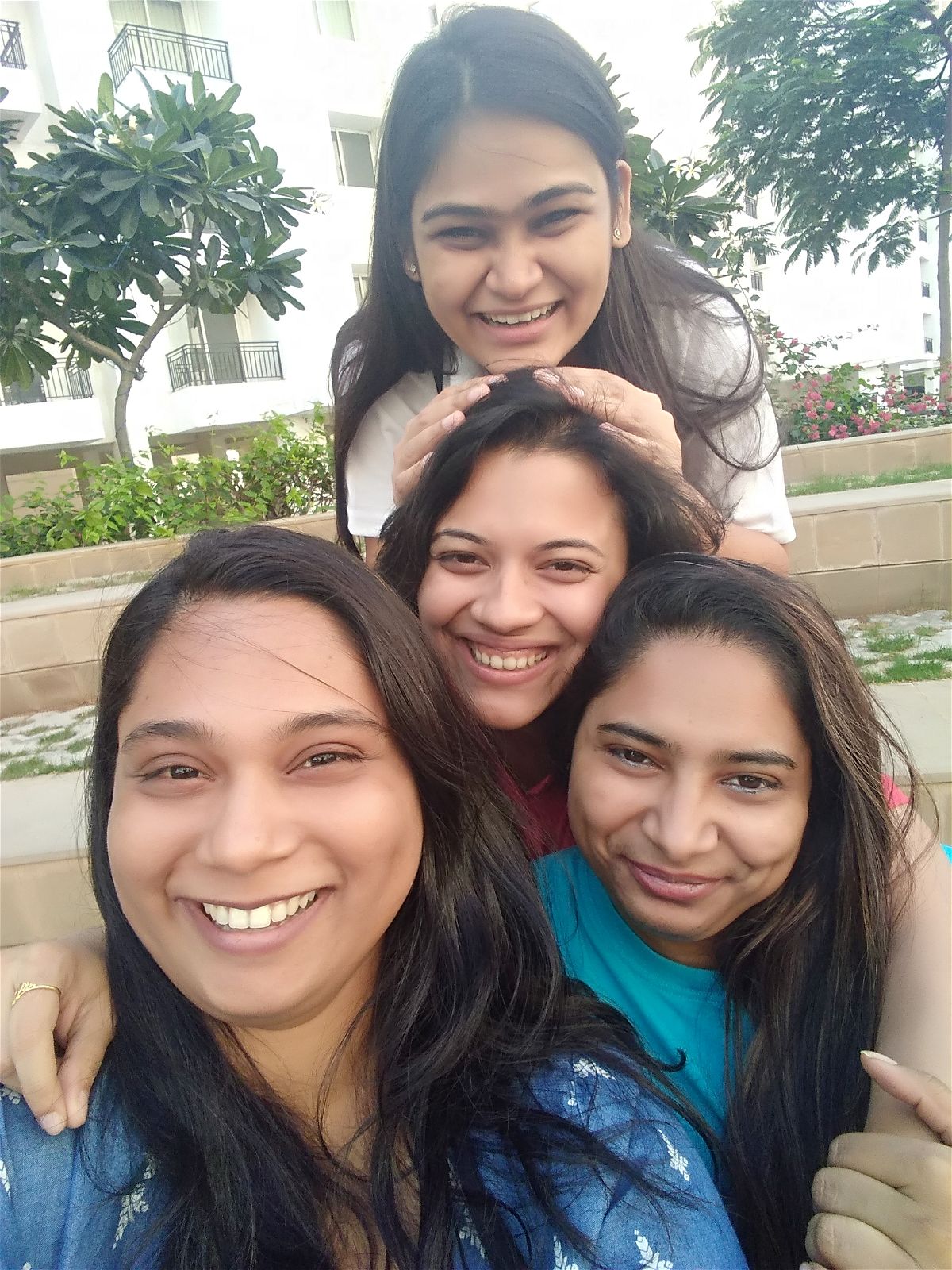 SS: You played your first World Championship a few days ago. Do you think your lessons from that event helped you here? 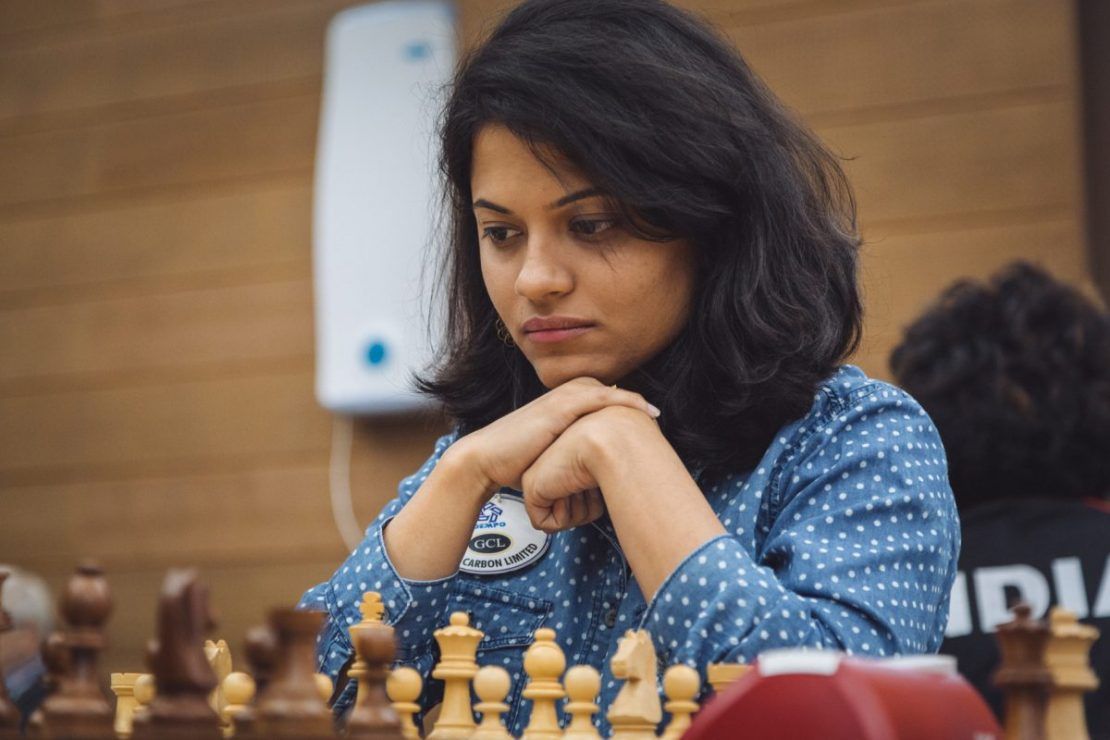 Bhakti fighting it out in her first World Championship in Khanty Mansiysk earlier this year. She lost the first round to experienced Natalija Pogonina.| Photo: Ugrachess

BK: I learned a lot in just 2 games of the World Championship. I saw the higher rated players playing tie breakers without showing nerves and giving their best. The atmosphere was terrific. I went there as student of chess and not as a competitor. I was happy that I had equal positions against Pogonina. That inspired me a lot when I came back.

SS: How was it playing at the World Championships?

BK: I was completely overwhelmed by that experience. I remembered my first International tour. It was Iran in 2006. Many of us were playing for the first time abroad. Padmini, Vidit, Ankit, Prasanna Rao etc. For the first time we saw the world where people were speaking a language we could not understand. It was the same for me in Russia at the World Championships. I saw so many of the top players of the World at one place.

SS: Of course Natalia Pogonina is not an easy opponent. How did you prepare for her?

BK: I had little time to prepare for the World Championship. In fact when he saw me playing in Goa International, GM Amonatov scolded me."You should be preparing and not playing here". But my home state was hosting a tournament for the first time. So I decided to play. I was preparing for 5 hours for the World Championship and then playing the game on board in a completely exhausted state. Finally I had to go for my visa leaving the tournament midway. Any way I prepared a few openings and concentrated on my middle game - thanks to Gokhale sir.

SS: After your journey at the World Championship ended you still were there next day cheering your team mates Harika and Padmini. How was it as a spectator? 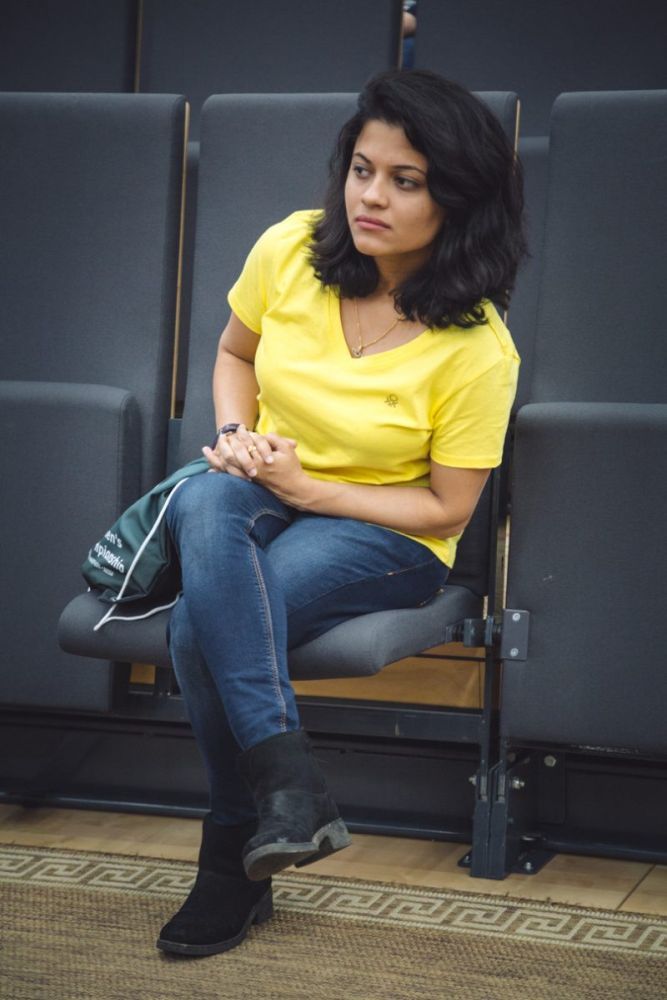 Bhakti, the spectator at the World Championships 2018 in round one tiebreaks | Photo: Ugrachess

It was an unique experience. Both were playing tie breaks. Padmini had a tough opponent in Abdumalik Zhansaya but I hoped that Padmini will use her superior experience to scrape through. But Zhansya is very talented and mentally tough. She withstood the stress and strain and Padmini couldn't make it. Harika is a great fighter. Playing so many tie breaks costed her dearly. This time she was not changing her openings and may be it was cause of her defeat. I and Padmini used the spare time in preparing food in my room.  We would cook food and spend time chatting. But we did not directly contact Humpy or Harika. Their concentration would have been affected. But we hoped both Humpy and Harika to go ahead and win. Unfortunately no one could go beyone round three.

SS: What do you think about the World Champion Ju Wenjun?

Whatever I had seen of her - I am totally impressed. She came as a Champion and played like a Champion, and finally became a Champion! I feel that is the quality of a true Champion to play one's natural game under any circumstance. She fought back from a loss in the finals to turn the tables on Kateryna Lagno. Wish I can play like Ju Wenjun under pressure (and also with the same class). 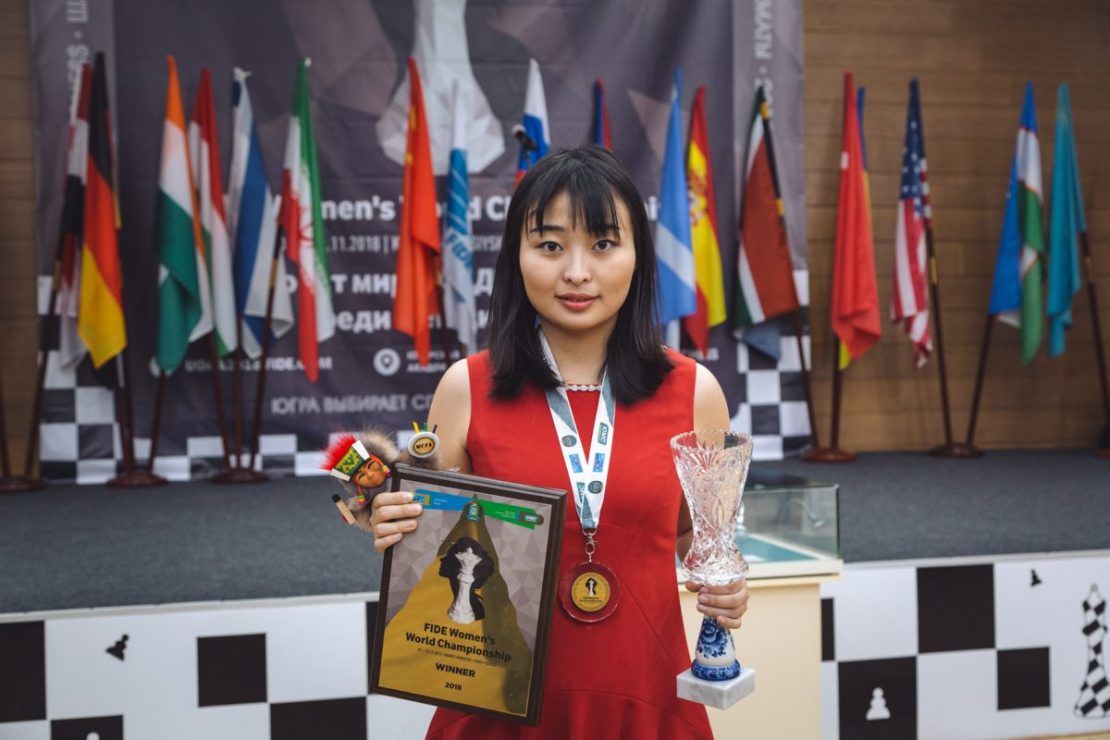 SS: And lastly Bhakti, you have three IM norms now, you are an Asian champion, National champion, you have achieved so much in the last few years. What are your next aims now?

BK: My first aim is to play well and finish my IM title. I need to reach 2400. It is not easy if you make heavy weather of the same but it's not something you cannot achieve. I have not thought of anything at this moment. I am just soaking myself in the thought that finally I am National Woman Champion. I am going to UAE for the Sharjah Cup Women's tournament in December. 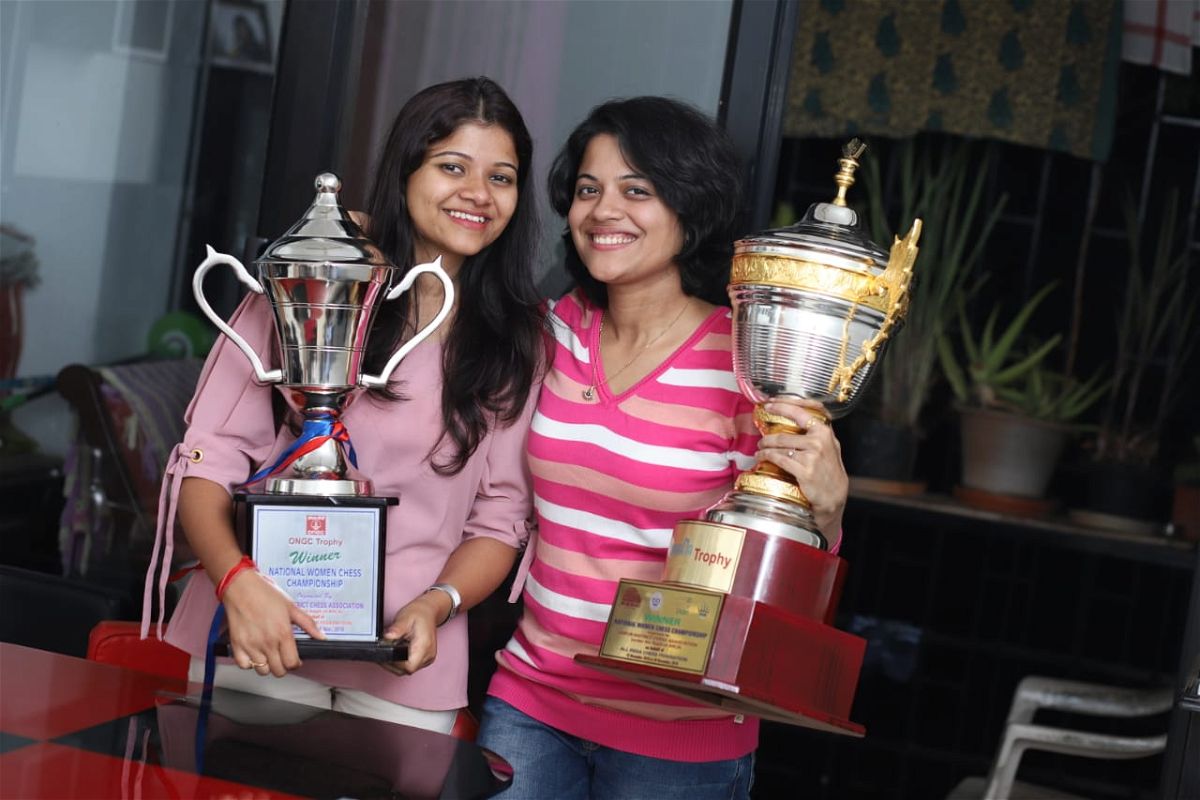 My aim is to become a World Champion