Sinquefield Cup 2018 Round 3: Grischuk demonstrates the power of space advantange to join the leaders

Just like the previous day, the 3rd round at Saint Louis also followed a similar script. Three games ending early in draws, two games being fought on, and one result finally in the 7th hour of play. It was Grischuk who came out victorious by beating Hikaru Nakamura. It was a game where Grischuk managed to show how space advantage is important and slowly churned out a win. There is also an exchange of tweets between Levon Aronian and Mikhail Golubev from which we can learn a lot. A tremendously informative and educative round 3 report of Sinquefield Cup 2018 by IM V. Saravanan and game annotations of Anand's encounter against Karjakin by Tanmay Srinath.

Wesley So comes across as a plain young man, and he didn’t have any qualms in admitting that he wasn’t in a good frame of mind during the previous game which he drew with white, the first round loss against Mamedyarov still haunting him. In the 3rd round, it was his turn to adopt the Berlin, and the game followed one of Vachier-Lagrave’s earlier outings: 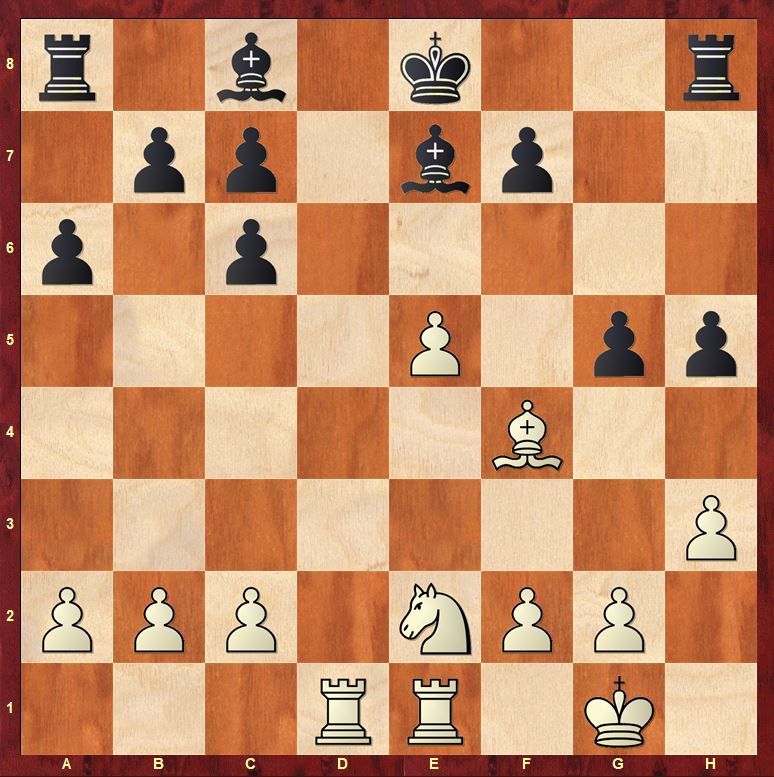 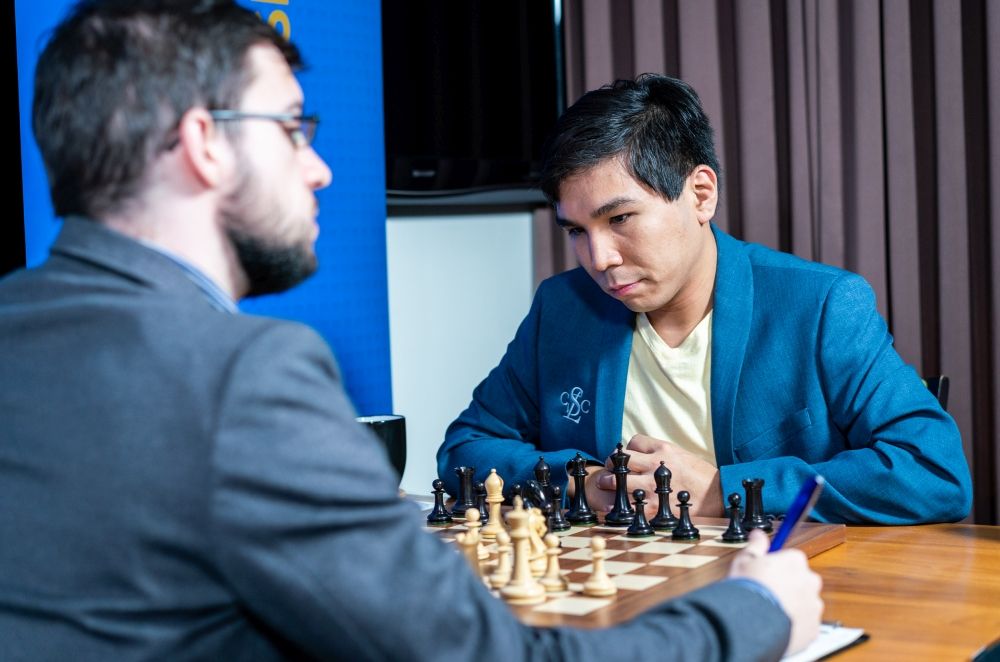 No offence meant, but the click is indicative of the game – not much happened! | Photo – Saint Louis Chess Club / Lennart Ootes

After two consecutive losses, it was understandable that Karjakin wasn’t really ready to burn it all to look for a win. He chose a quiet continuation against Anand’s Open Ruy Lopez, and there were almost fluctuations in equilibrium: 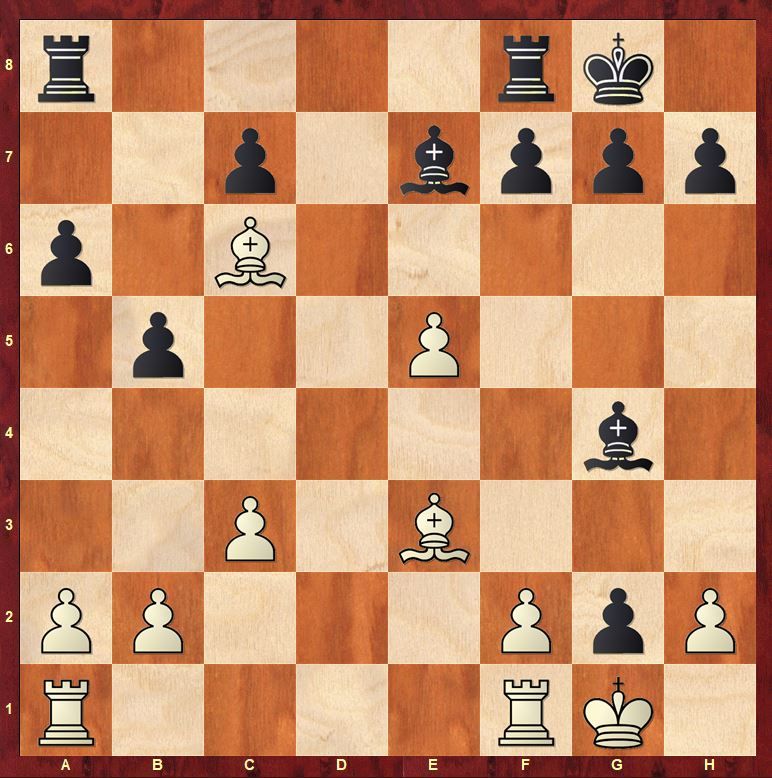 Choosing the comparatively quite Be3 system, Karjakin almost didn’t think much against Anand’s choice of 11…Bg4, and reached the diagrammed position quickly. He came up with 16.Rfc1 after a 5 minute think, but Anand seemed to equalise quite comfortably: 16…Rab8 17.a4 b4 18.cxb4 Bxb4 19.Bxg2 c5!?... once again leaving us with the question – is it possible in modern chess to get a tangible position to play with white at all? But you should also need to remember the grind he suffered yesterday… 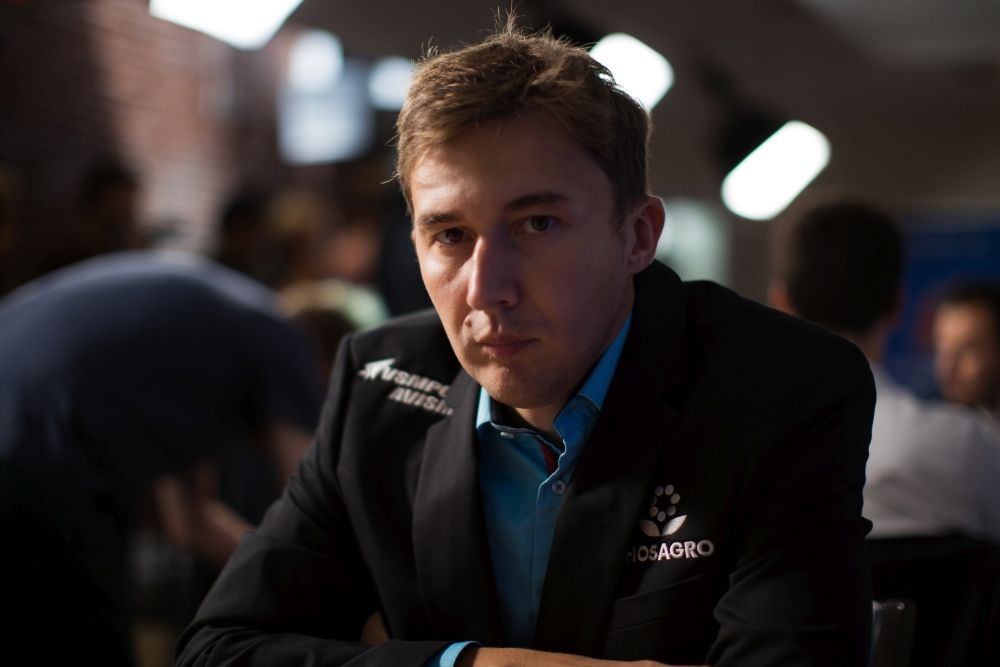 After his incredible effort yesterday, Carlsen’s returned to the board to face Aronian’s 1.e4 again, which he has been boldly executing since the Norway Masters Blitz from 2018. When praised for his boldness is pursuing his new love against the world champion also, Aronian came up with the quote of the day,”…It’ is risky, but as they say in Russia, the one who doesn’t risk, doesn’t drink Champagne!” 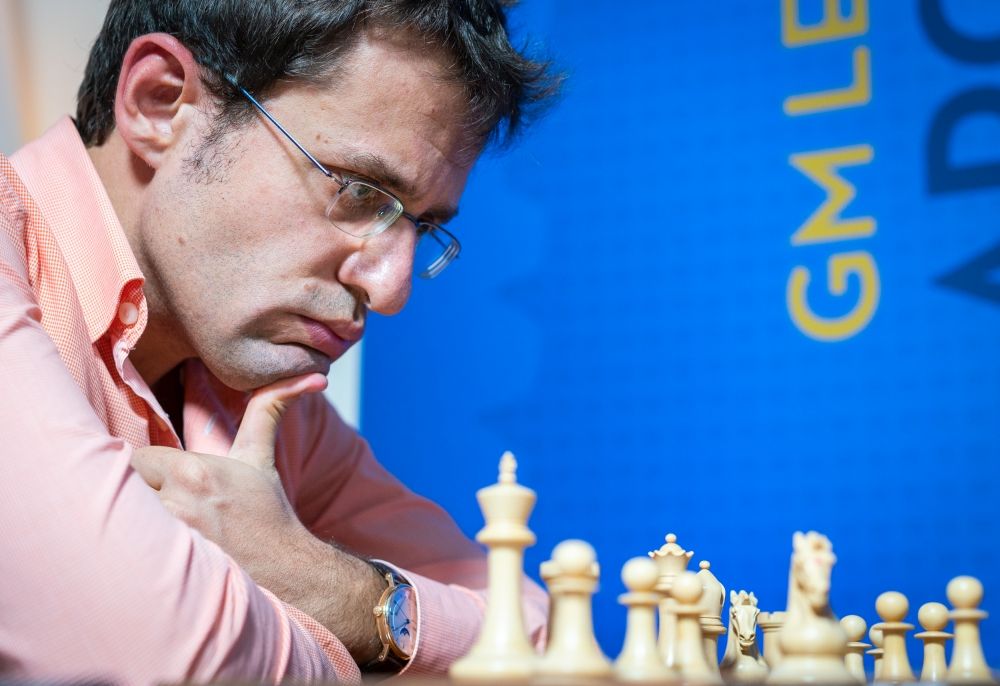 And for a moment in the game, he even seemed to be smelling more than the drink: 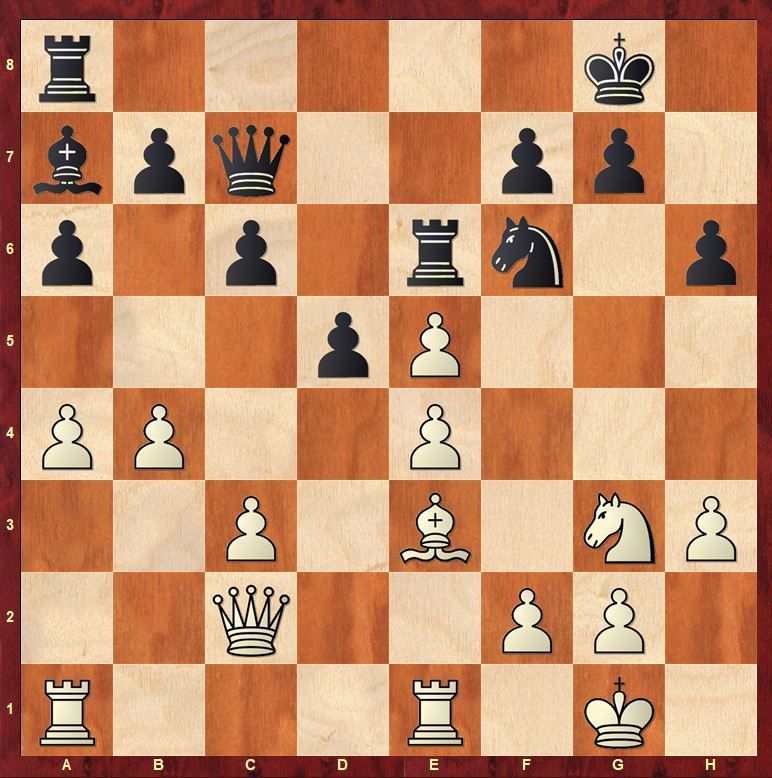 Here, it seemed inevitable that black was forced to go into the simplification involving an exchange sacrifice with 19…Bxe3 20.Rxe3 (If 20.exf6 Ba7 and Black is threatening …Qxg3) 20…Rxe5 21.f4 Rxe4!? 22.Nxe4 Nxe4 and Black seemed to be enjoying enough compensation for the pawn. But Carlsen unexpectedly continued 19…Qxe5 and after 20.exd5 cxd5 seemed to be staring at difficulties 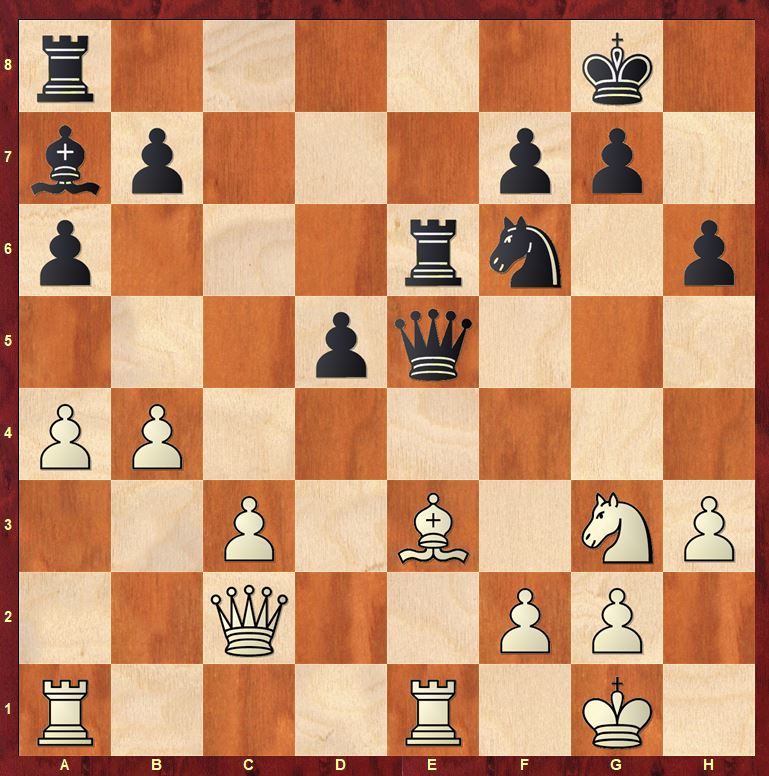 Carlsen too, acknowledged that this was a critical moment. Aronian preferred 21.Rad1, but what would happen here after 21.Bxa7? Aronian had seen it of course, and offered the following variation: 21…Qxe1 22.Rxe1 Rxe1 23.Kh2 Rxa7 24.Qd2 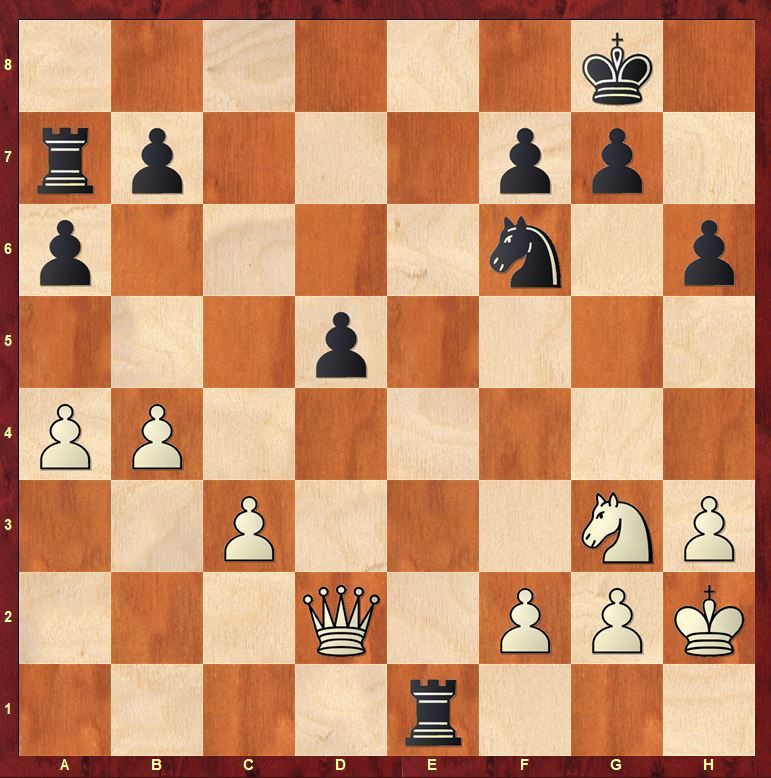 Carlsen came up with the enigmatic proclamation, “I wasn’t too concerned. Maybe I should have been – but I wasn’t”! Here, Aronian wasn’t happy with the position after 24…Re8 25.Nf5 Raa8, and somehow he felt that this should be okay for black. But not everyone was convinced:

Grandmaster Mikhail Golubev got onto twitter, and got onto an open discussion: 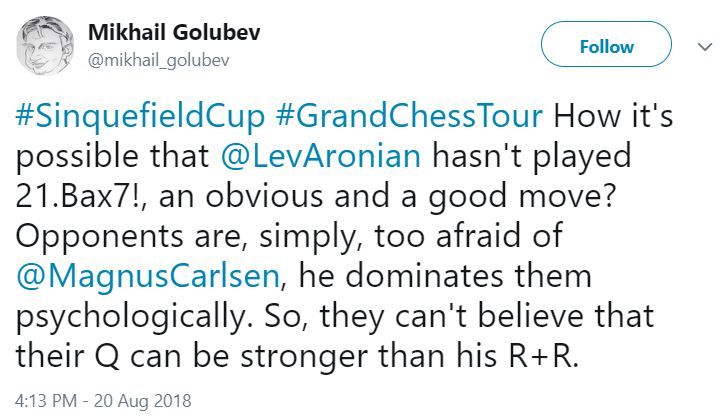 And suddenly, Aronian got into replying, and it all became a little messy: 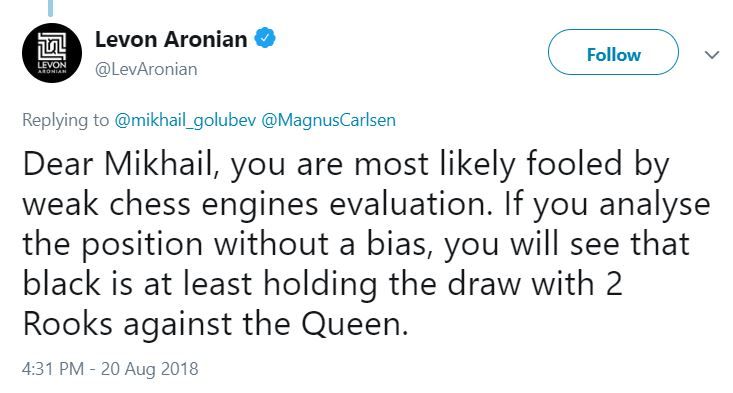 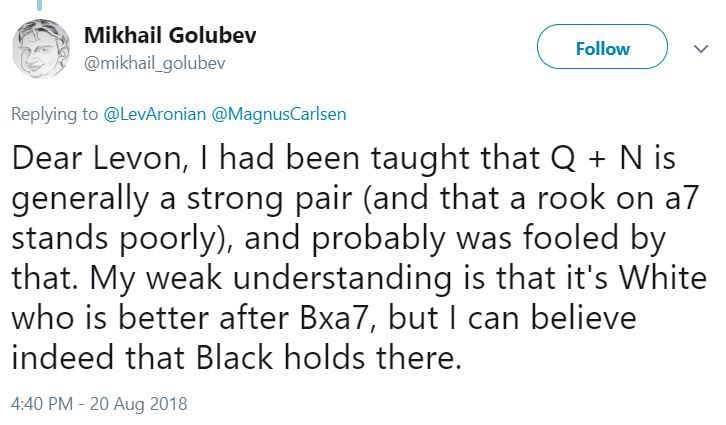 Mamedyarov has this ability to choose lines which are fundamentally not unsound, but at the same time create their own peculiar dynamics. Having chosen such systems, he plays them with maximum energy and strives for initiative from the very beginning, thus setting enormous problems for the opponents if they are caught unawares. Curiously, the line he chose on Monday against Caruana was such an offbeat system in the Queens Gambit Accepted which has been adopted by two of Anand’s seconds, Wojtaszek and Gajewski curiously. 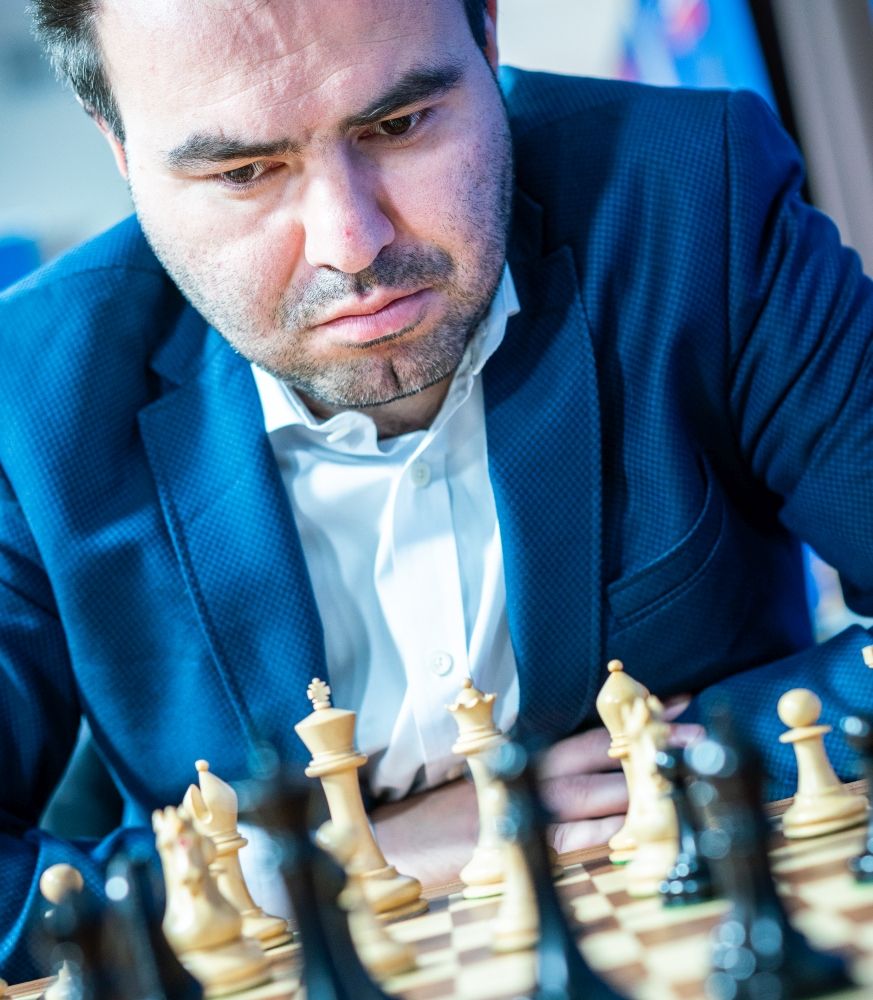 However, he found his preparation not helping him much, after Caruana played a new move: 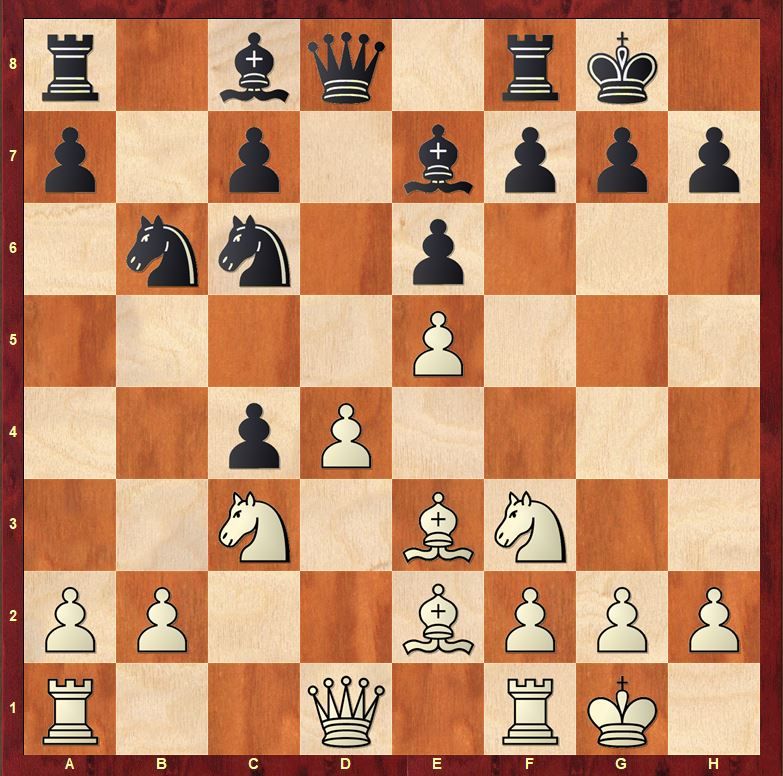 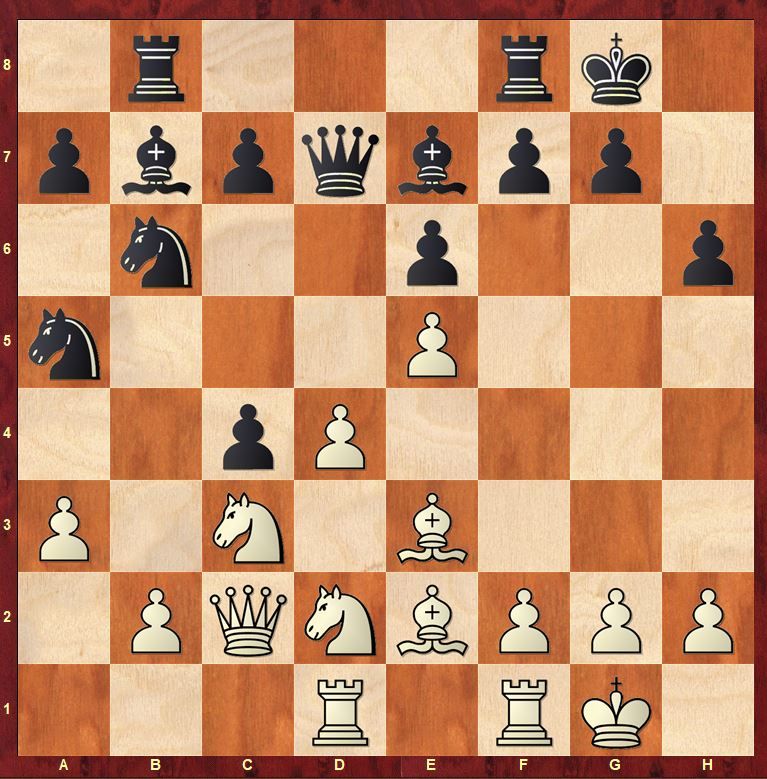 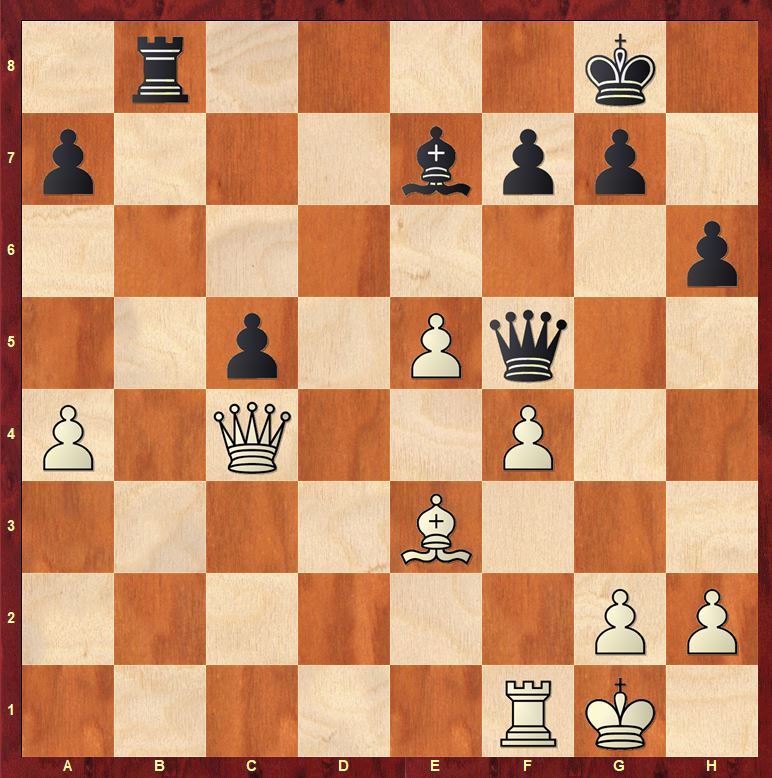 27.Qd5 Rd8 28.Qc4 Rb8 29.Qd5 Rd8 30.Qc4 and just when everyone was waiting for the three-fold repetition, came 30…a5! Caruana would later proclaim that he felt his position was comfortable, even though ‘he seemed happy to repeat’, and even though the position was still equal, ‘black was on the better side of equality’. Mamedyarov praised this moment of fight shown by Caruana on the board, that when Caruana faces Carlsen in the world championship, he better learn to milk positions such as this. And Caruana calmly replied, “If I got the same position, I would probably play it against Magnus as well!! In general, you have to try to take your chances. You don’t win games everyday in these tournaments. Wins usually come with a great deal of difficulty, so when you have the slightest chance you have to take it”. Brave words! 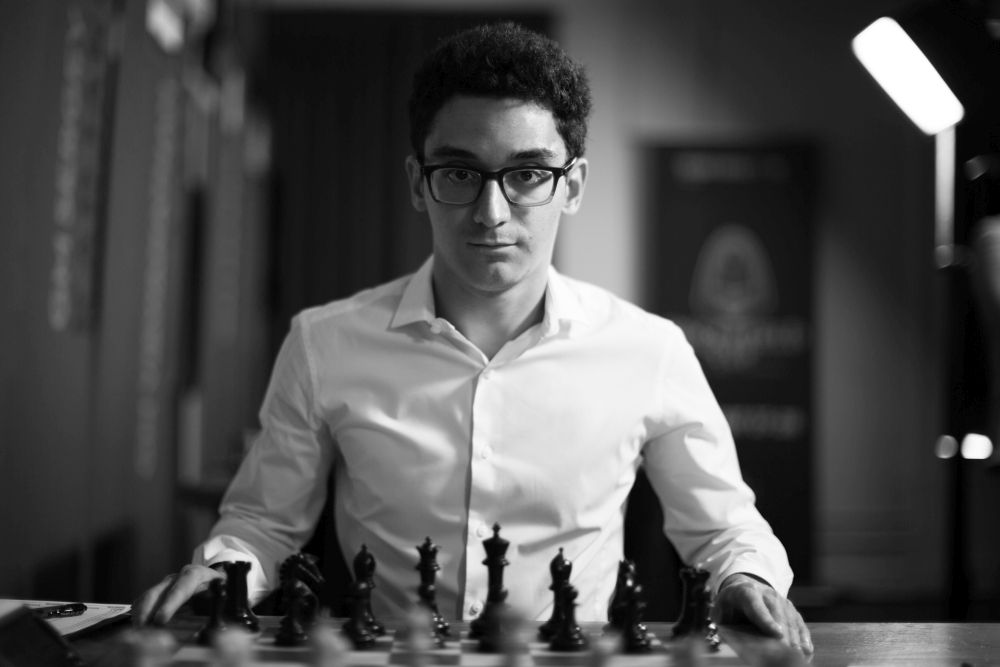 Now, finally the game of the day between Nakamura and Grischuk which followed known paths for a long time: 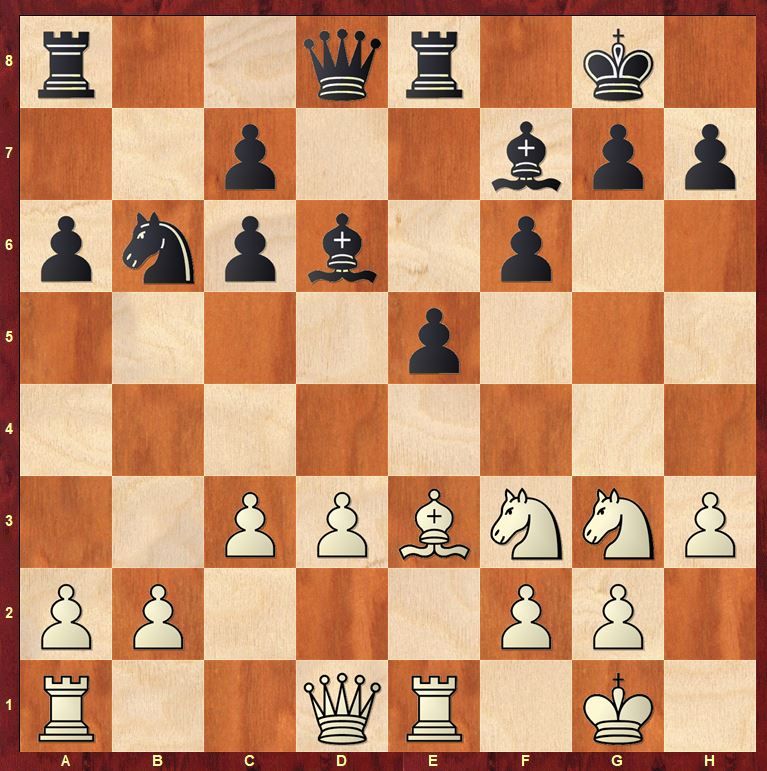 This position had already occurred in Carlsen – Aronian, Leuven Blitz 2016 (which continued 17.d4 here), and Hikaru varied with 17.c4, obviously a prepared improvement. But he didn’t seem to be handling the white side too well… 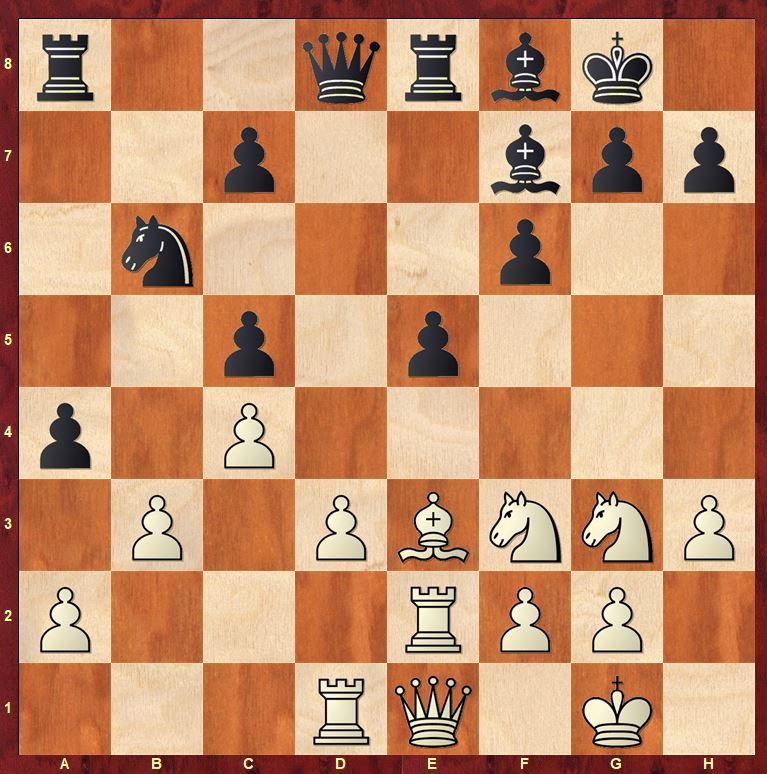 We had talked about Nakamura’s ‘coiled spring strategy’ about his rapid game against Vachier-Lagrave in the Saint Louis Rapid & Blitz, but in the current position, he seemed to be taking it to dubious heights with…22.Nd2?! Qd7 23.Nb1 (where is the knight going?) axb3 24.axb3 Bg6 25.f3 Rad8 and black seemed to be doing fine. After a long maneuvering game, finally Hikaru cracked in the following position: 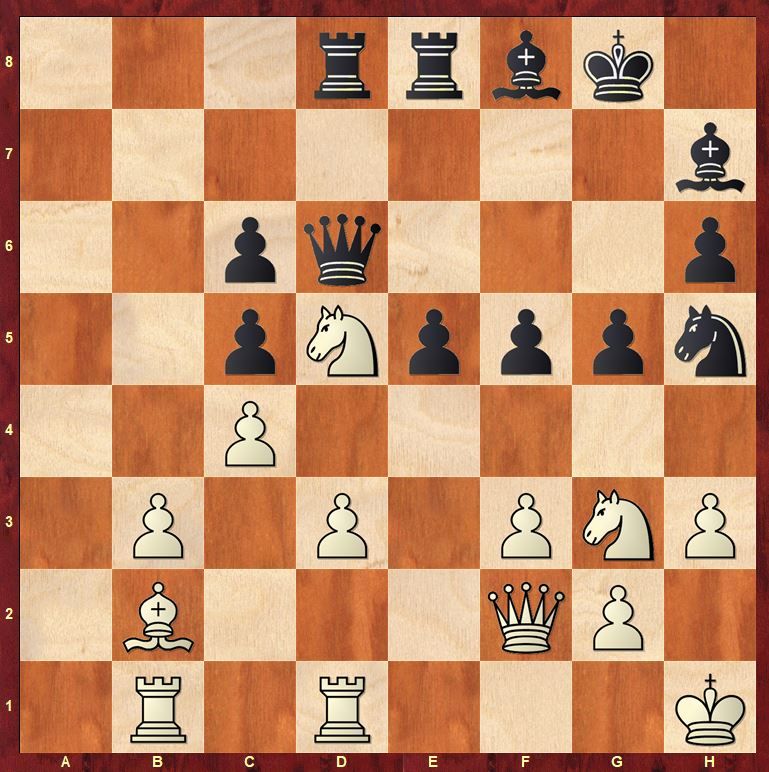 Here, white is forced to play 40.Nxh5 cxd5 41.cxd5 f4! and remains better. But under clock pressure, Nakamura erred with 40.Nc3? Nf4 and the d3 pawn ultimately fell. Though the game progressed for a long 6 hours and more, the outcome was almost never in doubt, though Hikaru fought valiantly. Grischuk’s moment of perfection came at… 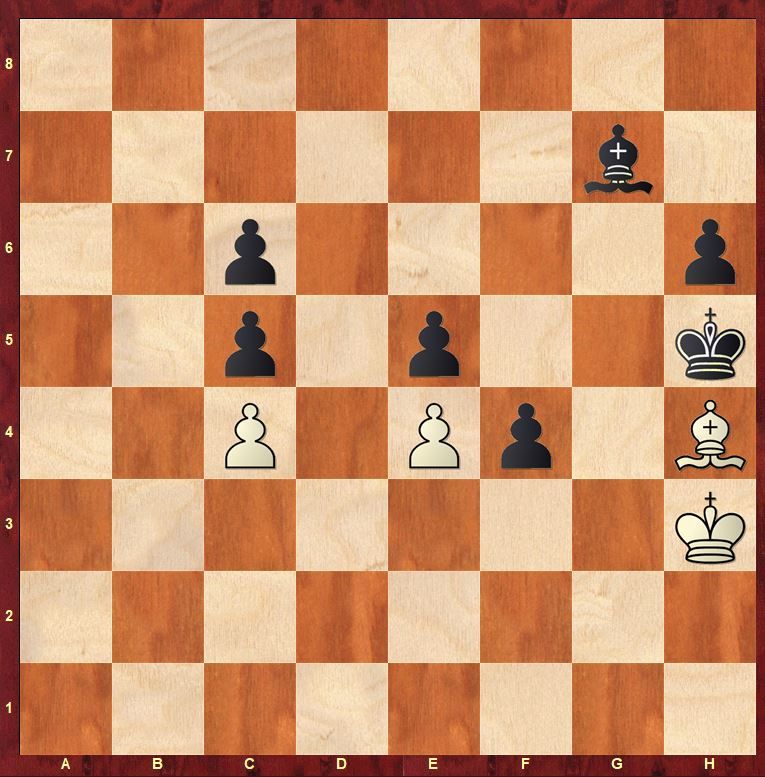 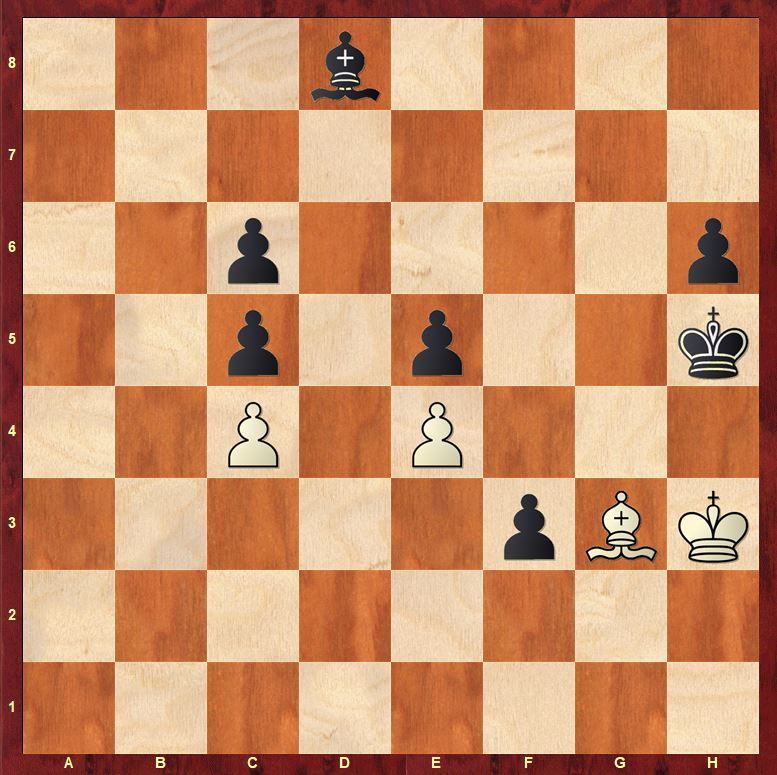 And out came our friend Lennart Ootes with his click and caption: 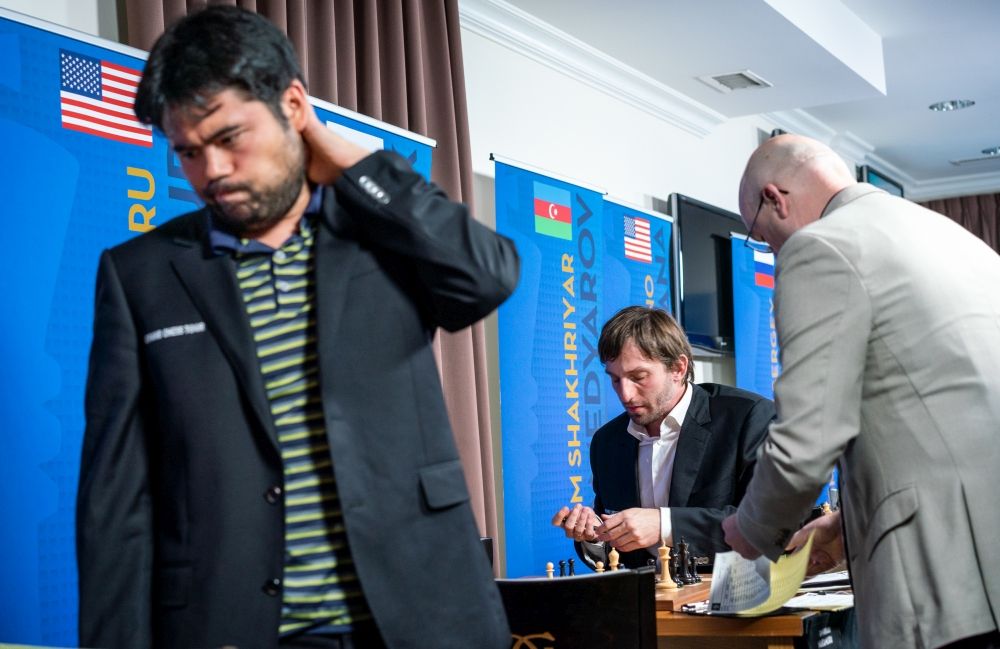 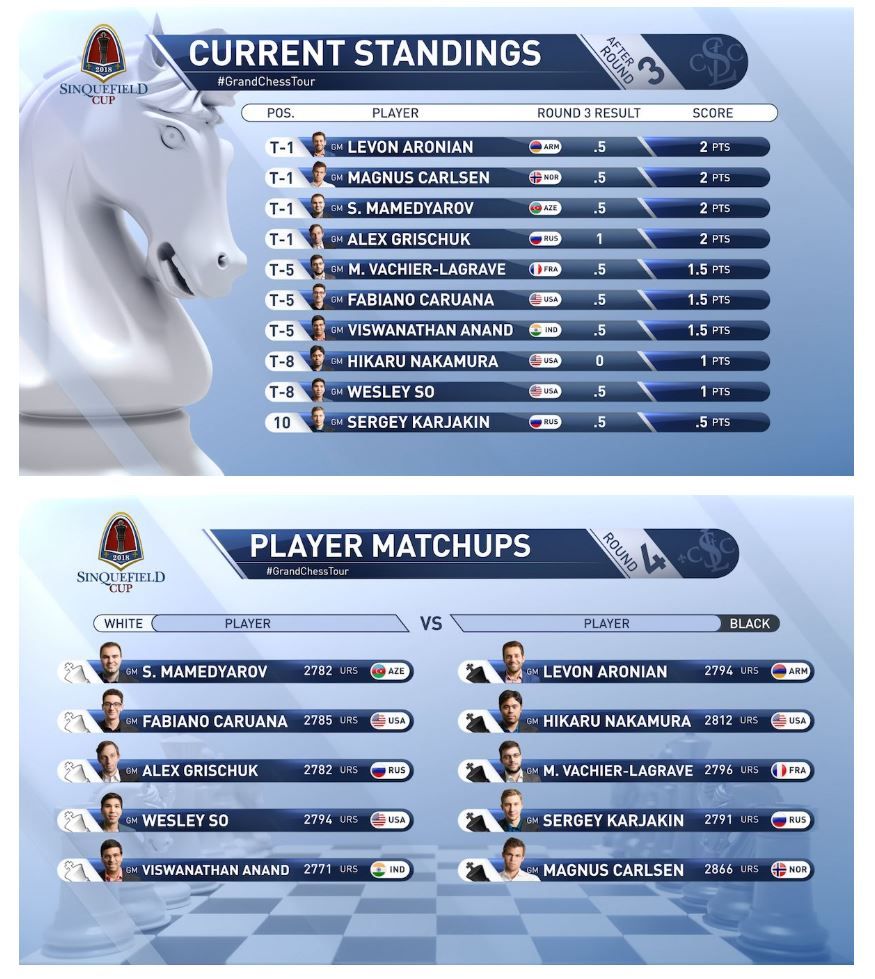