He was one of the most prolific achievers in Indian sub junior chess. Girish Koushik has the record for winning gold in Asian championships u-8,10,12,14 and 16! He was also the world under-10 champion, national under-9 and 11 champion and the list of medals is simply endless. But then all of a sudden he nearly quit playing chess! Girish became academically inclined and started to pursue Electronics and Communications Engineering in RV College of Engineering in Bangalore. It seemed like India had lost a GM. Not quite true. The moment his 8th semester got over Girish packed his bags and left for a three tournament Europe trip in May-June 2019. From being rated 2444 with one GM norm, he came back with an Elo of 2500.7 and three GM norms, effectively becoming India's 63rd Grandmaster.

Girish Koushik - the boy with the Midas Touch! 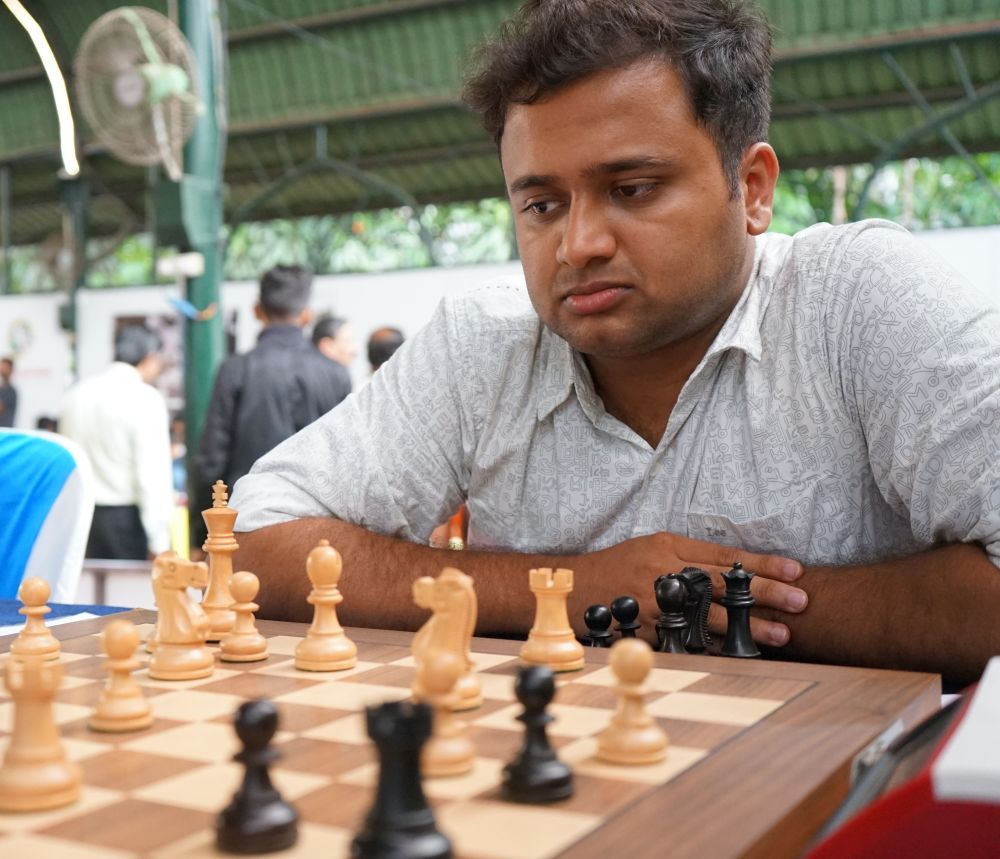 The 8th semester at the RV college of Engineering had just come to an end. Girish Koushik couldn't wait to catch a flight and play in the three tournaments that he had planned during May and June 2019. They were the Llucmajor tournament in Spain, First Saturday June edition in Hungary and Balaton GM Round Robin also in Hungary. Girish, apart from being an IM, had one GM norm under his belt and an Elo of 2444. To expect that he would gain 56 Elo points in three tournaments and also two GM norms, was asking for a bit too much, especially because the lad had hardly seen the chess board in the last few months. Speaking to ChessBase India, Girish said, "I had just finished my 8th semester B.E exams on the day of departure, and I had absolutely no chess preparation for the trip." But nothing came in between Girish and his will to do well. This is how he fared in the three events: 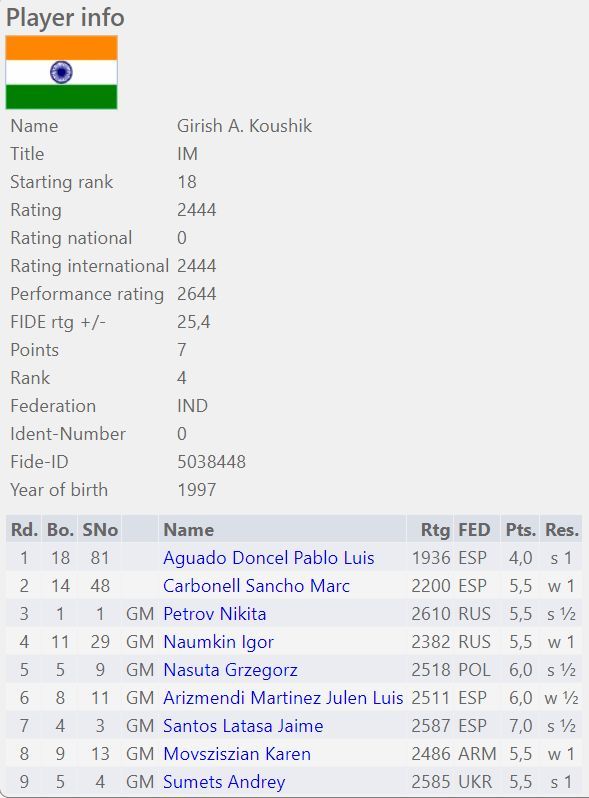 A GM norm, 25 Elo point gain and fourth place finish in the strong Llucmajor Open was a great start. 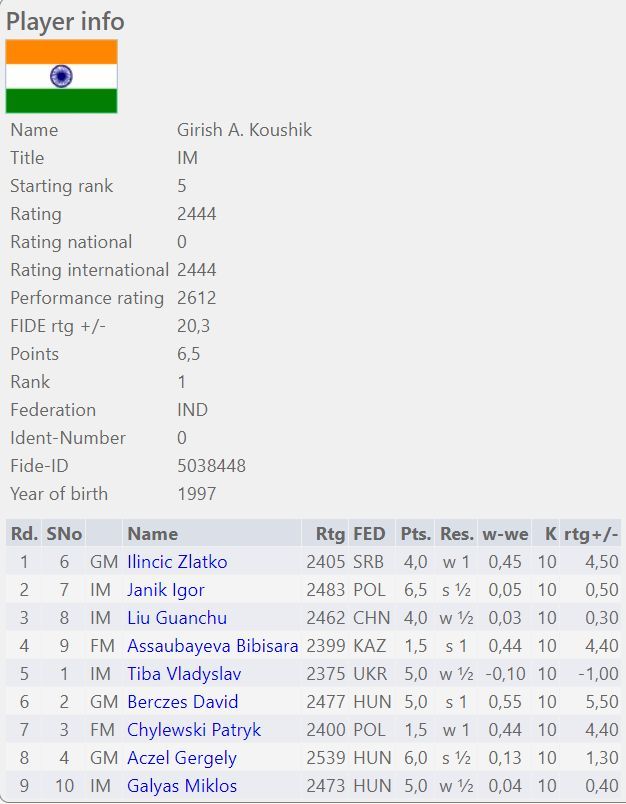 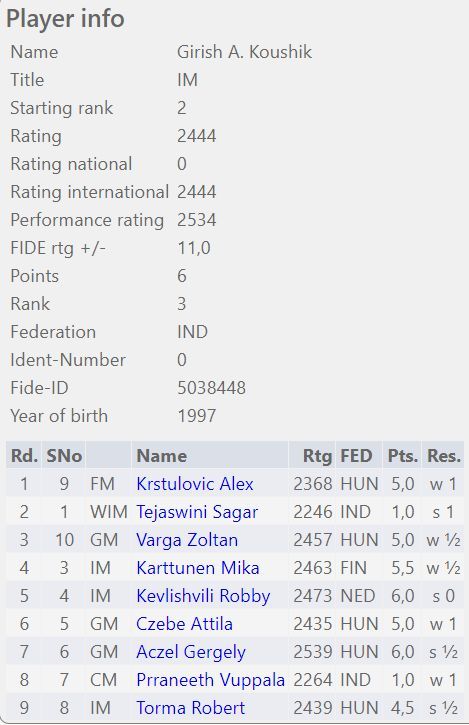 11 Elo points in the final tournament of the trip was good enough to cross 2500 Elo and get his live rating to 2500.7 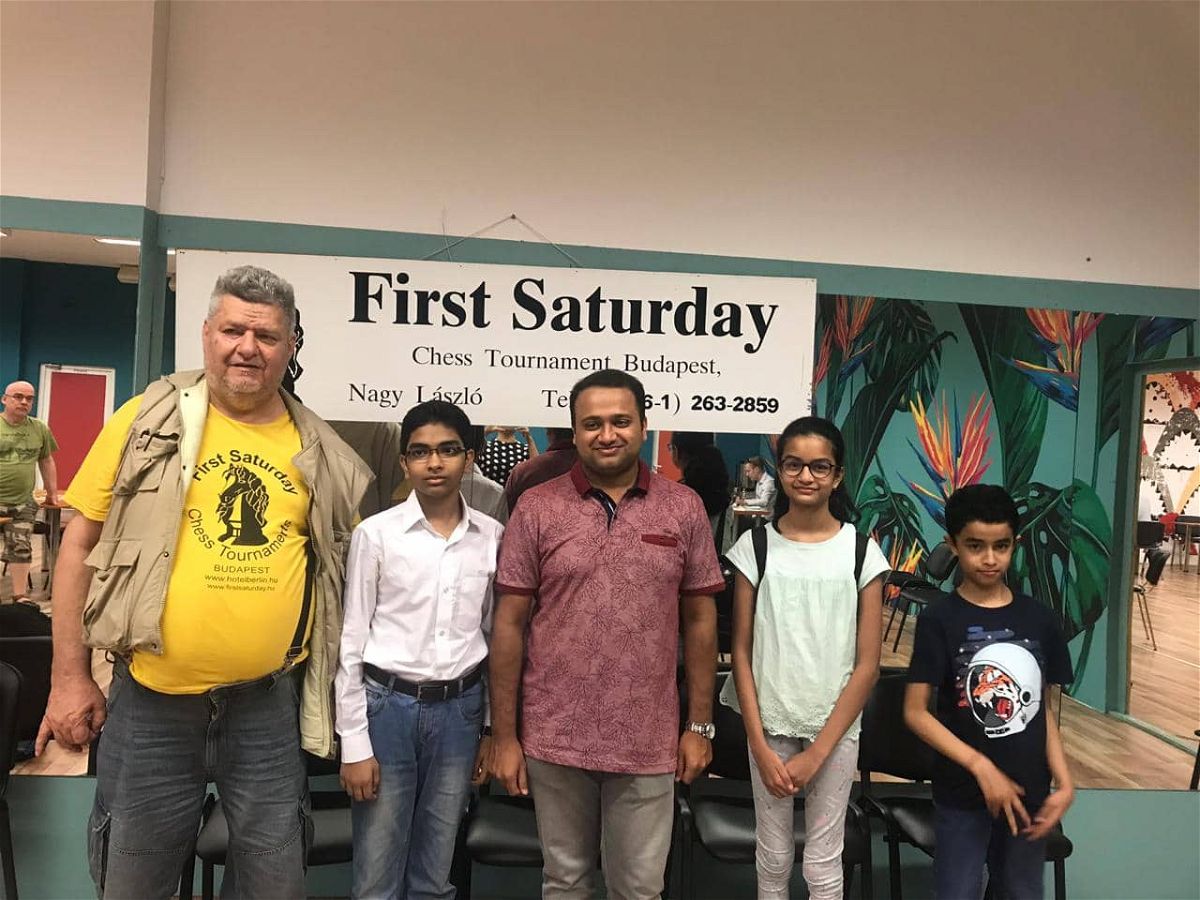 From being 2444 Elo with 1 GM norm, within 30 days Girish had achieved all his three GM norms and crossed 2500 Elo mark. If you look at his results carefully, you will see that the youngster had lost only one game in the entire trip. This just goes to show how solid Girish really is. "My two favourite games from the trip were my wins against GM Igor Naumkin and against GM Andrey Sumets both from Llucmajor tournament," says Girish. Here's the last round game against Sumets: 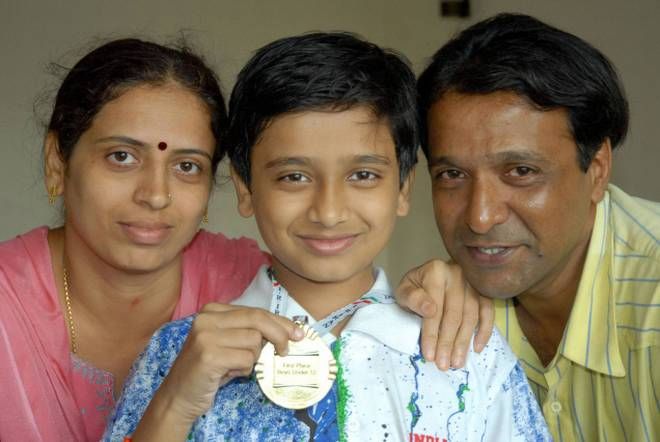 Girish with his parents | Photo: The Hindu

Girish's father Arun used to play chess during his college days. He was extremely passionate about chess and always wanted his son to excel in it. " It was always my father's dream that I should become a GM. He has been my only coach in my chess career. I trained very hard with him when I was young. There were days when we would work for even 14 to 16 hours on chess! We would mainly work on the middlegame and endgame at home. My father would accompany me to tournaments and during the events we would work on the openings. He was very fond of books and would refer to a lot of them and teach me! So this was all well stored in my mind! Even though I didn't prepare much later on, my hard work from the past has helped me a lot." 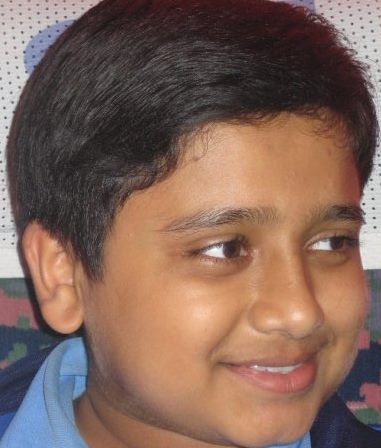 Cuteness overload! Little Girish was a nightmare for his opponents on the board and everyone's favourite off it! | Photo: Girish Koushik Facebook

Girish's hard work on chess ensured that he was better than all his competitors in age group tournaments. He hardly prepared for his games. In spite of this he won the Asian Championships in under-8, 10, 12, 14 and 16 category! He was also the under-10 world champion and under-9 and under-11 national champion! It's achievements like these that made everyone believe that Girish would go on to become one of the most prolific chess players that the country has every produced. "I trained very hard and played a lot of tournaments when I was young. This helped me in getting a lot of experience. With experience comes intuition! And I was very competitive in the category tournaments. So, I was able to win National, Asian, World and Commonwealth age group titles." 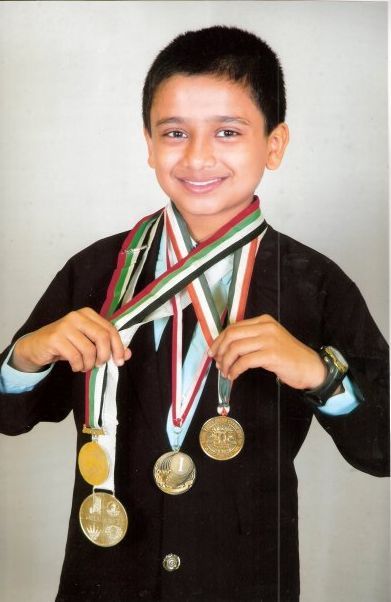 But at the age of 18, Girish decided to give his academics the priority. "I feel that both academics and chess should be part of one's life. If you just keep working on chess, your life might become monotonous. I don't know about others, but for myself I definitely feel that way. Academics and chess I think complement each other and I feel it is a great combination." Girish studied electronics and communications engineering in the RV engineering college, one of the premier engineering institutes in Bangalore. He finished his course just a month ago and is a full fledged engineer! 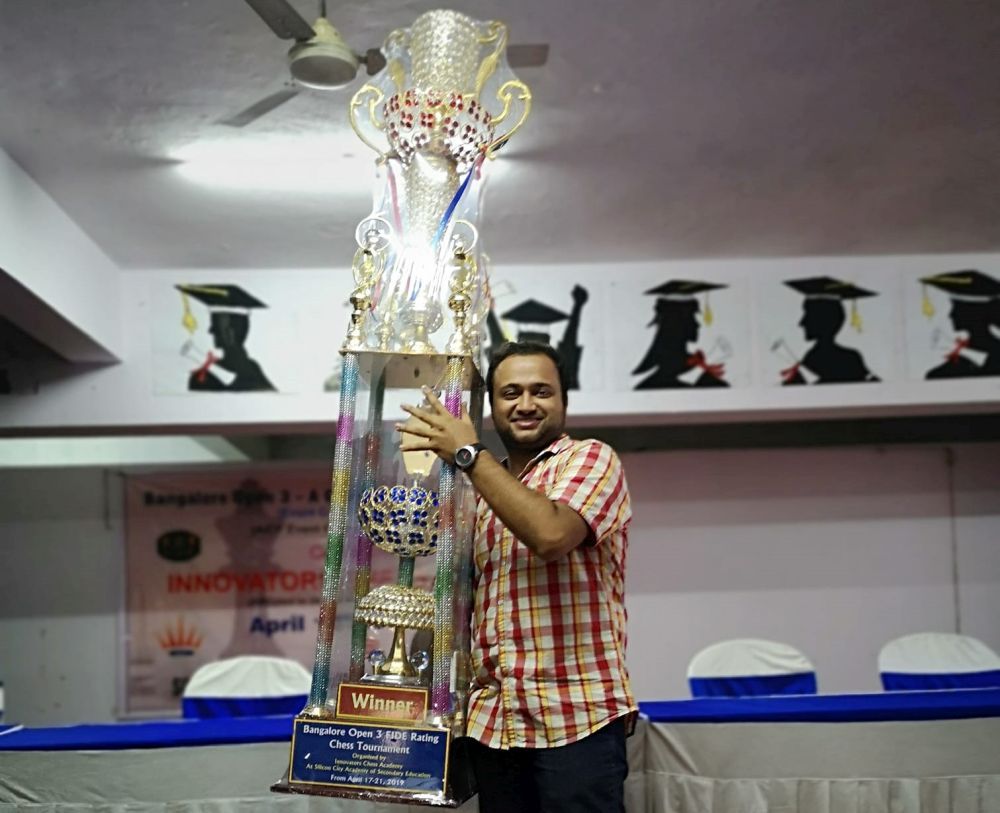 Girish holding the biggest trophy of his chess career at the 3rd edition of the Bangalore Open 2019 | Photo: Girish Koushik Facebook

Who are the people that Girish would like to thank after becoming a GM? "My parents mostly, other than that I want thank my college for their support and encouragement, finally my friends who have helped a lot during difficult times."So what does future hold for this youngster with the midas touch? "I don't know exactly! I have a job offer in hand. I also have plans to go for MS abroad but right now nothing is clear. I want to play as many tournaments as I can whenever I find time." We as chess lovers can only hope that Girish plays a lot and reaches a rating where chess would take precedence over everything else in his life! For that we will have to wait and watch! For now, we congratulate the 22-year-old for becoming the 63rd GM of India and the 3rd from the state of Karnataka. 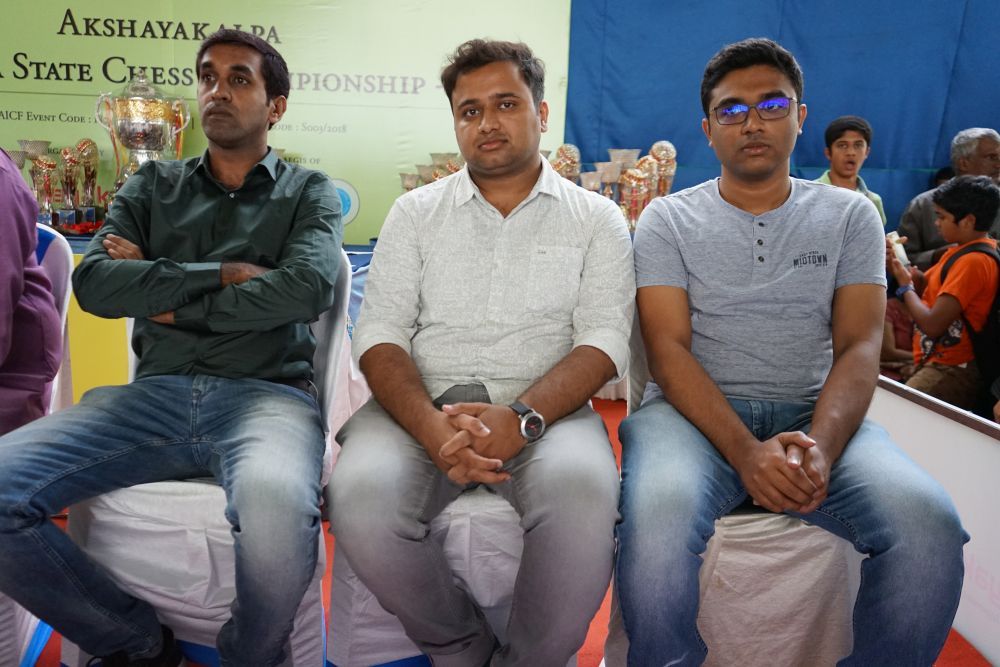 Girish Koushik wins the biggest trophy of his chess career