Every once in a while we hear a story of a chess player who surpasses the established norms and achieves truly something special. At that point a thought does cross almost every chess fan's mind - would he be doing it the clean way? This is the case of 58-year-old GM Igors Rausis who saw a phenomenal surge in his rating that brought him to a rating of 2686, gaining over 50 Elo points in the last year. For a player who had long passed his prime, Igors performance was closely scrutinized. And while him playing against too many lower rated players didn't go down well with the chess community, on 11th of July he was caught red handed in the Strausborg Open in France where he was cheating with his mobile phone inside a toilet. Full story.

A few days ago there was quite an intense debate taking place on Facebook about the rule of Elo difference between two opponents being limited to 400 points. In chess even if the rating difference between two opponents is over 1000 Elo points (let's say a 2700 GM playing a 1700 rated opponent), the difference is limited to 400 points. This discussion was because Igors Rausis, a GM from Latvia and who now plays for the Czech Republic, had gained a massive rating in the last few months and at the age of 58 years had climbed to an Elo of 2686! 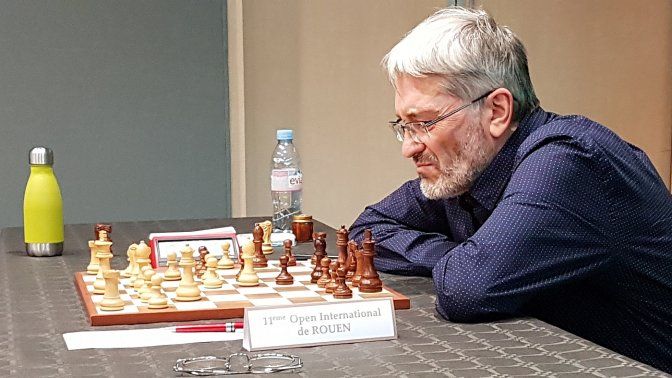 Igors Rausis, 58 year old GM was the oldest GM in the top 100 players in the world with an Elo of 2686 | Photo: orcherlatour.fr 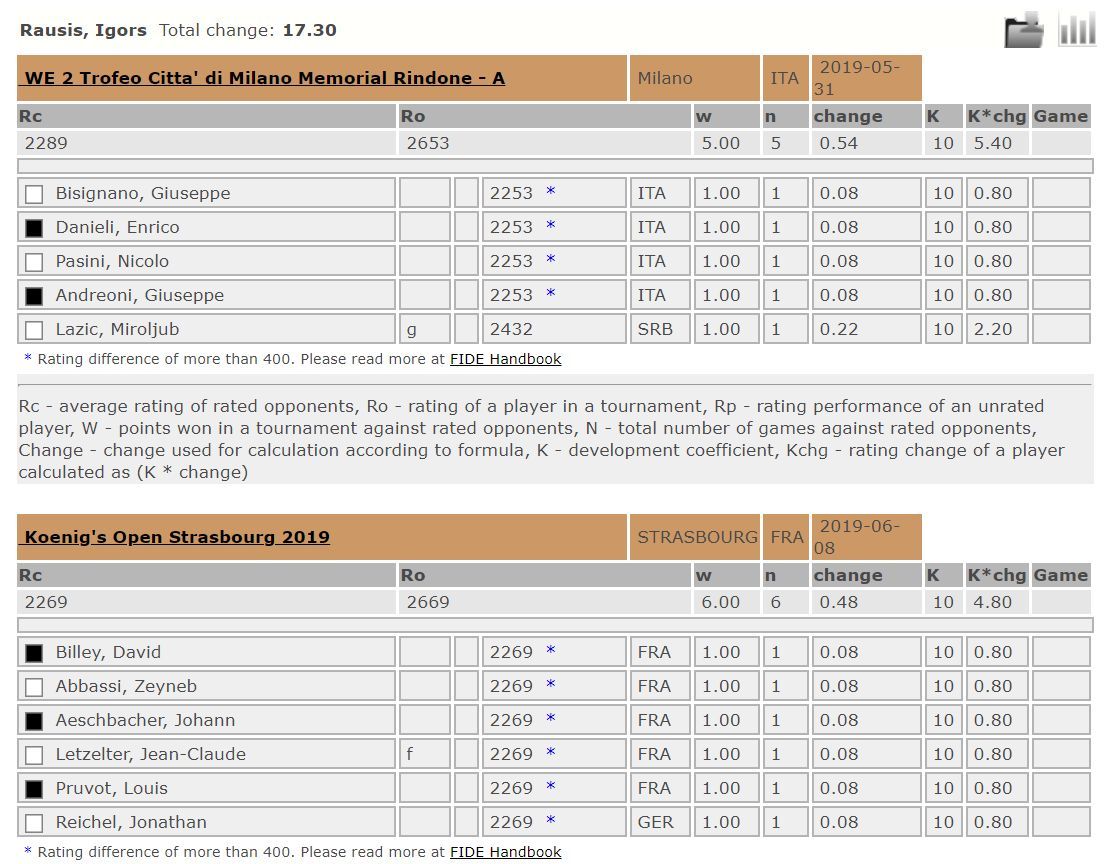 Igors' strategy was to choose weak events and play against players who were rated more than 400 points below him and gain 0.8 Elo points per game. In this way he had gained 17.3 Elo points in the last month and moved from 2669 to 2686!

While all of the above was controversial behaviour from Rausis, it was well within the FIDE rules. However, at the 10th Strasbourg summer festival that is being held in France from the 10th to the 14th of July 2019, Rausis was caught using a mobile phone inside the toilet!

The first prize of the tournament was just 1000 Euros and there were no GMs taking part in the tournament apart from Rausis. In fact he was the top seed by 320 Elo points! The second seed was rated just 2365. Rausis was following his strategy of facing lower rated opponents and gaining 0.8 Elo points from every game. Him reaching 2700 Elo would have really made the world take notice of his achievement. But things didn't reach this stage. Igors Rausis was caught cheating when his mobile phone was found in the toilet by the team of Fair Play Commission headed by Yuri Garrett. The tournament arbiters worked in close sync with the Fair play Commission and the cheater was caught. Here is what Yuri Garrett wrote on Facebook:

The Fair Play Commission has been closely following a player for months thank to Prof. Regan’s excellent statistical insights. Then we finally get a chance: a good arbiter does the right thing. He calls the Chairman of the Arbiters Commission for advice when he understands something is wrong in his tournament.  At this point the Chair of ARB consults with the Secretary of FPC and a procedure is devised and applied. Trust me, the guy didn’t stand a chance from the moment I knew about the incident: FPC knows how to protect chess if given the chance. The final result is finding a phone in the toilet and also finding its owner. Now the incident will follow the regular procedure and a trial will follow to establish what really happened. This is how anti-cheating works in chess. It’s the team of the good guys against those who attempt at our game. Play in our team and help us defend the royal game. Study the anti-cheating regulations, protect your tournament and chess by applying the anti-cheating measures in all international tournaments. Do the right thing, and all cheaters will eventually be defeated. I wish to thank the chief arbiter for doing the right thing, my friend Laurent Freyd for alerting me and Fide for finally believing in anti-cheating efforts. The fight has just begun and we will pursue anyone who attempts at our integrity. Today was a great day for chess." 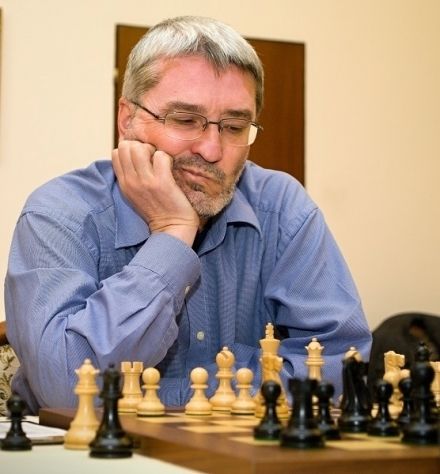 The fairy tale story of Igors Rausis comes to an end

Emil Sutovsky, FIDE Director General, made a post in Russian on his Facebook profile: (This is translated into English by using Google translate)

"BREAKING: Igor Rausis is caught at the tournament in Strasbourg. Thank you Yuri Garrett and Laurent Freyd, who managed to capture the long-suspected player. A thanks to the arbiters of the tournament, who clearly followed all the instructions. Rausis is suspended from the tournament, and all the material will be sent to the Ethics Commission. In Parallel, the French police will take part. Ten days ago I wrote that I don't advise anyone to cheat. The capture of Rausis is the beginning. FIDE has tightened its attitude towards cheating. Although it is impossible to eliminate cheating, the risk of being caught has significantly increased and the penalties will be greater. The war against cheating will last for years, and FIDE is in it for the long haul."

ChessBase India spoke with Mr. Ravindra Dongre, who is the member of FIDE's Ethics Commission. According to him as the incident has just happened, all the details will be submitted to the Chairman of the Ethics Commission, and then the proper procedure will be followed to impose the penalty.

Rausis was also the coach of the Bangladesh chess team in the past. ChessBase India spoke to GM Enamul Hossain who was one of the members of Bangladesh team, "It is very surprising for me. I know he plays weak tournaments and increased rating but it's hard for me to believe that he cheated."

Two important questions to be answered:

1. What is the penalty for cheating?

2. What is to be done about the 400 Elo points difference rule?

When we talk about the penalty, it is important that stringent laws have to be imposed. As a journalist I was present at the Dubai Open 2015 when Gaoiz Nigalidze was caught cheating and his phone was found in the toilet. FIDE stripped him of his GM title and imposed a ban of three years. The three years period has ended and Nigalidze can once again start playing chess. Just like how Rausis had beaten so many opponents and won so many rating points before he was caught, Nigalidze had also won the Al Ain Open 2014 and went back home richer by $11,000. 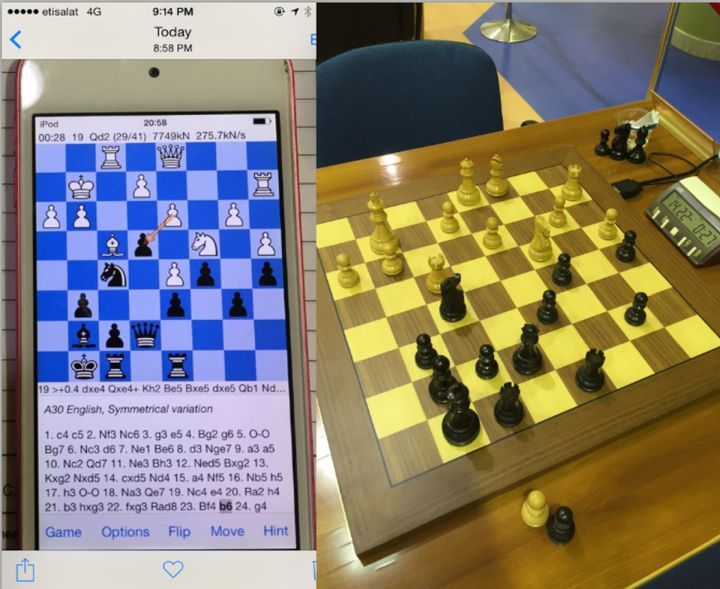 For the 400 Elo point difference rule, it's fine if you face one or two opponents with that difference in a tournament or a rating period. But if you are facing lower rated opponents on a consistent basis, then something should be done about it. One of the events that comes to my mind is the Colombo Open 2015 when Li Chao with a rating of 2693 was the top seed. He faced all opponents who were rated 400 points below him and gained 5.6 Elo points and moved to 2699 on the Elo scale. 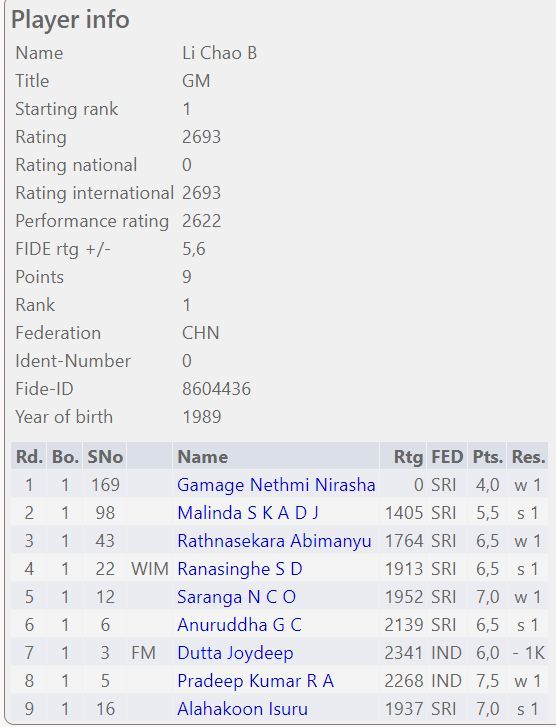 Of course Li Chao had proved before and even after the event that he is a world class player by fighting against the best players in the world and pumping his rating beyond 2750, but if someone decides to play around with the rules, and does something like this on a regular basis, he would not be cheating as he is within the laws of FIDE. We can agree that beating lower rated opposition on a regular basis is by no means easy, but it is also important to take this into consideration the other side and put some thought on this front.

As for Rausis' case we will wait for the FIDE Ethics Commision's decision on his penalty.