The blitz leg of the Paris Grand Chess ended in the most exciting manner one could have imagined. Wesley So led the event after the blitz, Sergey Karjakin took over after the first day of the blitz, but neither of them won the tournament! It was GM Hikaru Nakamura, who had always been lurking around the winners, who took the title prize scoring four wins on the final day. Indian ace, Viswanathan Anand, finished with a lukewarm sixth place with a combined score (rapid + blitz) of 17/36.

The battles moved to the blitz time control on the fourth day of the Grand Chess Tour in Paris. Instead of 20 minutes with a 10-second delay, the players now had only 5 minutes and a three-second delay to make their moves. And after eighteen gruelling rounds, dramatic changes occurred on the leaderboard. At the conclusion of the first day of blitz, tournament leader, Wesley So was overtaken as the sole leader for the first time in the event by Sergey Karjakin. But by the end of the eighteenth round, even Karjakin was unable to keep his lead, as Hikaru Nakamura – almost out of the blue – stepped up and conquered the field. 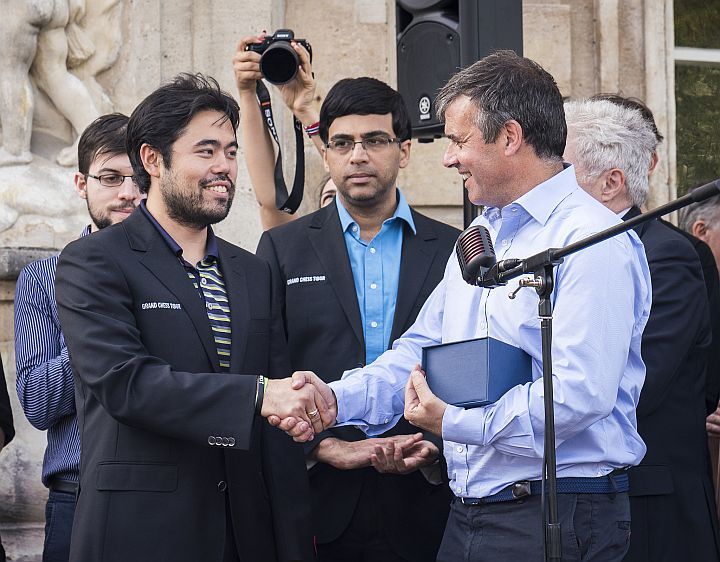 When the blitz started, however, it was hard to even count Nakamura as a serious contender. Of course, he was always lurking around but it was Karjakin’s mind-boggling five-game winning streak that overshadowed everything else. After a quiet draw against Nakamura in his opening game, Karjakin defeated Grischuk, Kramnik, So, Caruana and Anand in his next six games, striding past Wesley So on the leaderboard at Flash-like speed.

This winning spree of Karjakin was brought to a halt in the seventh round when Maxime Vachier-Lagrave, with merely 10 seconds remaining on his clock, was able to defeat the 2016 World Blitz champion. Vachier-Lagrave was a full piece up in this game but the little time remaining on his clock gave his opponent much hope to try and survive. Karjakin was trying to set up a fortress that he hoped his opponent would not be able to break with the limited time he had remaining. But MVL was on his toes in this game and utilized his knight and rook to the fullest to bring home the full point. 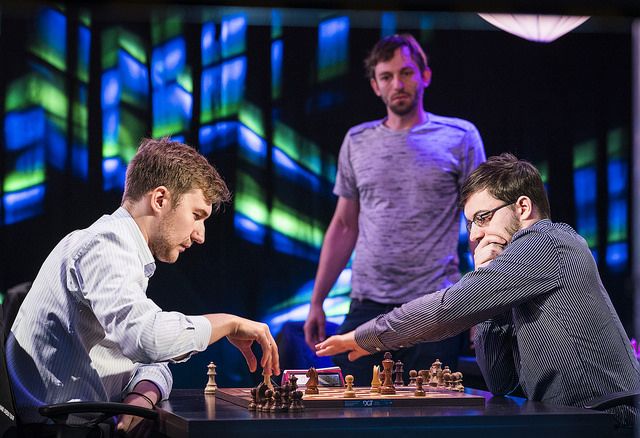 Even with 10 seconds remaining on his clock, MVL brought down Karjakin in style | Photo: Lennart Ootes

Karjakin came back strongly winning his next game against Aronian but had to finish the day with another disappointing loss against Shakhriyar Mamedyarov where Karjakin – quite shockingly – blundered a full piece! 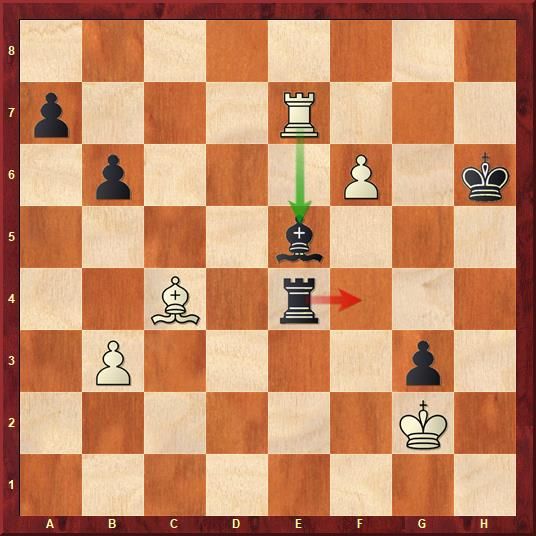 Believe it or not, Sergey played 60...Rf4 here, leaving his bishop en prise!

By this point, Nakamura had clearly surfaced as a potential contender. Having scored 5.5 points out of his first nine blitz games, the American Grandmaster had surpassed the winner of the rapid leg, Wesley So, to take clear second place. He was still a full point behind Karjakin, however.

On the final day, Nakamura’s strategy was simple. He didn’t want to mess with the in-form players. He was happy to hold on to a draw against them and pick out on those who were struggling in the tournament. His wins came against Anand, Kramnik, Mamedyarov and Caruana, all of whom had finished in the bottom half. The rest of his games, he drew, taking his total score to 23/36 (12/18 in blitz).

In this time, Karjakin began to struggle. While Nakamura had scored four wins on the final day, Karjakin could only score one. And that one win came against his compatriot, GM Vladimir Kramnik. He also lost two important games on the final day which deteriorated his tournament standing furthermore.

For the only Indian in the fray, Viswanathan Anand, the blitz leg of the event brought terrible results for the most part. In all of his eighteen games, Anand was only able to eke out three wins: against Grischuk on the first day and one against Caruana and Sergey Karjakin on the final day. 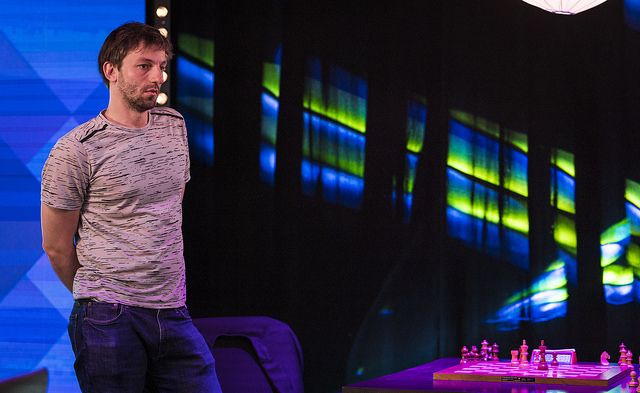 Against Grischuk, a sharp Sicilian Najdorf had fizzled out in an endgame where both sides had two rooks, a minor piece and a bunch of pawns. Even though the material was equal, Anand, with his extra space, surely had a slight edge; nothing too serious, though. But some inaccuracies by Grischuk changed the evaluation of the position from slightly better for white to completely winning in a matter of merely three moves. Anand was quick to realize this and instantly liquidated into a clearly winning king and pawn endgame to force resignation by move 41.

Anand began the second day of blitz with a win in the very first round. Playing with the white pieces in a closed Spanish Opening, Anand had nothing to worry about for the most part of the game. But as the clock began to tick down, Anand made a fatal error on his 42nd move and what was an equal position turned into a disastrously lost one.

However, Anand wasn’t the only one in time trouble. Caruana missed the outright knockout punch in the time scramble. Nevertheless, his position was still clearly winning. But then, what happened on the 51st move, was utterly inexplicable. 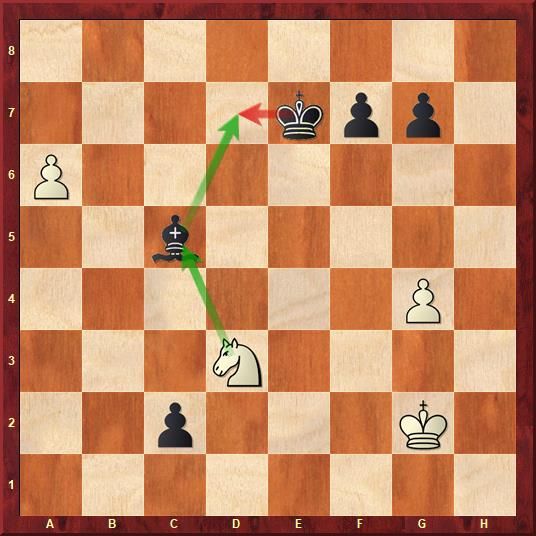 In this position, Caruana, who is black, is completely winning. All he needs to do is reach the white pawn on the queenside and capture it. Of course, Caruana saw this but chose the wrong route. Here, he played the unfortunate 51…Kd7?? Until this point, Black's bishop was immune from being captured by the black knight as the pawn on c2 was only one step away from queening. But Caruana’s last move allowed Anand to capture with a check and leave resignation the only option for Caruana.

Anand’s third and final win of the tournament also had a big impact on the standings as he defeated one of the biggest contenders for the title, Sergey Karjakin in the 15th round of Blitz. Karjakin was leading the tournament alone until this point, but after this loss against Anand, the Russian GM was caught in the lead by Hikaru Nakamura. 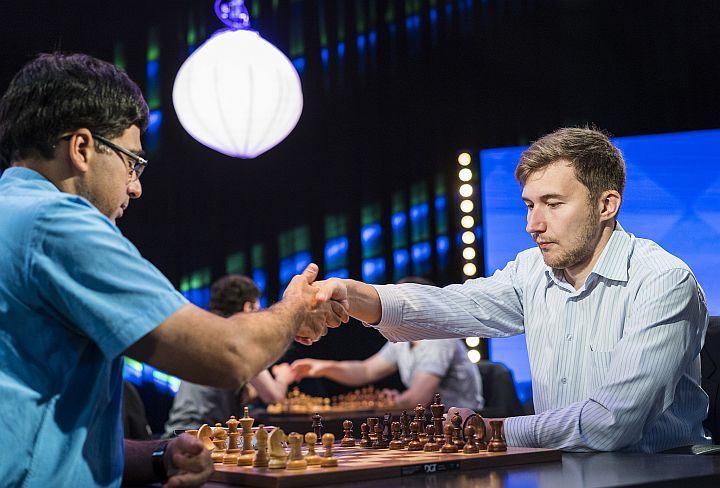 Anand’s game against Karjakin had a big impact on the overall standings | Photo: Lennart Ootes

This game was also a closed Spanish Opening. Anand, who had the white pieces, had emerged with a slightly better position out of the opening and soon, Karjakin began to stumble. On his 23rd turn, Karjakin blundered from a slightly worse position into a terribly lost one by allowing his opponent gain a strong passed pawn on the queenside. It wasn’t possible to stop Anand from queening his pawn until black accepted a ruinous loss of material. Karjakin limped on for a few moves but resigned eventually on move 31.

This was the beginning of Karjakin’s fall. He lost another game immediately after this one to Maxime Vachier-Lagrave and drew his final two games against Aronian and Mamedyarov respectively to finish joint third in the blitz with a score of 10.5/18. He also lost his overall lead of the event to Hikaru Nakamura in the process. Nakamura won his final two games against Mamedyarov and Caruana to increase his lead over Karjakin by a point and a half to bag the title prize in the Paris leg of the Grand Chess Tour.

Anand’s performance in Paris was definitely not the best but in comparison to Leuven, the Madras Tiger has done much better in terms of both overall score and tournament standing. In Leuven, Anand had finished eighth overall with a total score of 14.5/36 while in Paris, he has scored 17/36 and has finished sixth. 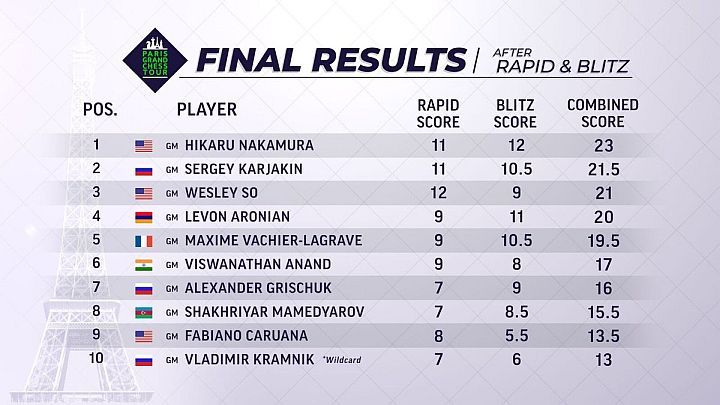