An intricacy that even many GMs may not know!

In chess, techinque is extremely important. Often there are two paths to victory. For the untrained eye, both the options look the same, because both lead to a win. But for a trained and experienced player, the most important thing in winning a won game is to give minimum counterplay to the opponent. How do you achieve that? Well, you have to improve your technique. In this article IM Sagar Shah tells you all about what good technique means. He shows you can example which you might be very well versed with, but he then shows a deep intricacy in it, which even many GMs may not know. If you understand this example well, you would get the gist of what good chess technique is all about!

I have a habit of buying a chess book in every tournament that I participate. I have to agree that there are many unread books in my library, but in general I like to keep building up my library. I hope one day I can have a collection of chess books like the great chess player Late GM Lothar Schmid! 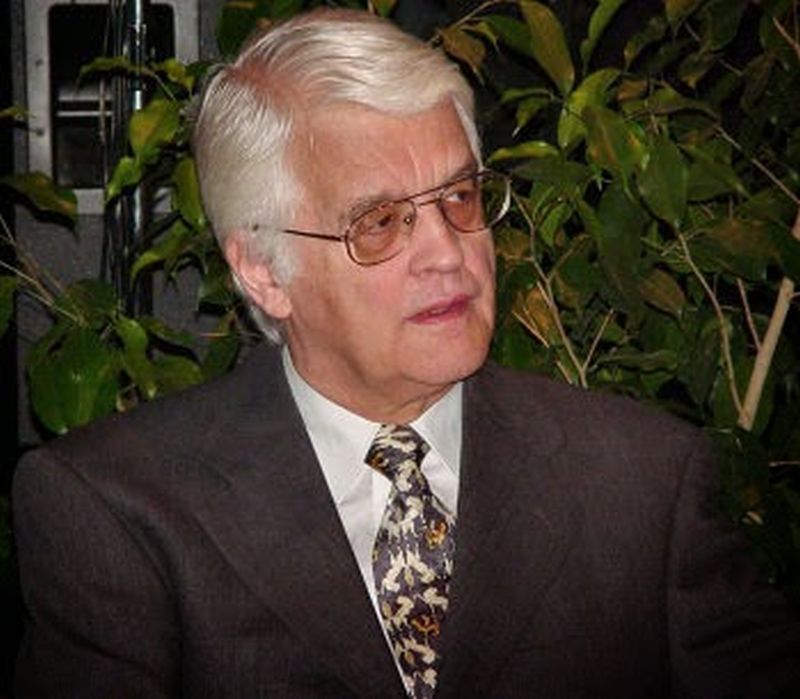 Late GM Lothar Maximilian Lorenz Schmid who had one of the best collection of chess books in the world.

An avid collector of chess books and paraphernalia Late GM Lothar Schmid was known for owning the largest known private chess library in the world, as well as a renowned collection of chess art, chess boards and chess pieces from around the globe. He is also the first player to win the German Correspondence Chess Championship. He is best remembered for being the chief arbiter of the epic 1972 'Match of the Century' between Bobby Fischer and Boris Spassky at Reykjavik and also Karpov–Korchnoi 1978, Kasparov–Karpov 1986, and for Fischer–Spassky 1992 (the 'Revenge Match'). Among the many rare books he owned was one of only ten copies that have survived of the first-ever printed chess manual, published in Salamanca in 1497 viz. "Repeticion d'Amores y Arte de Ajedrez" (Repetition of Love and the Art of Playing Chess). 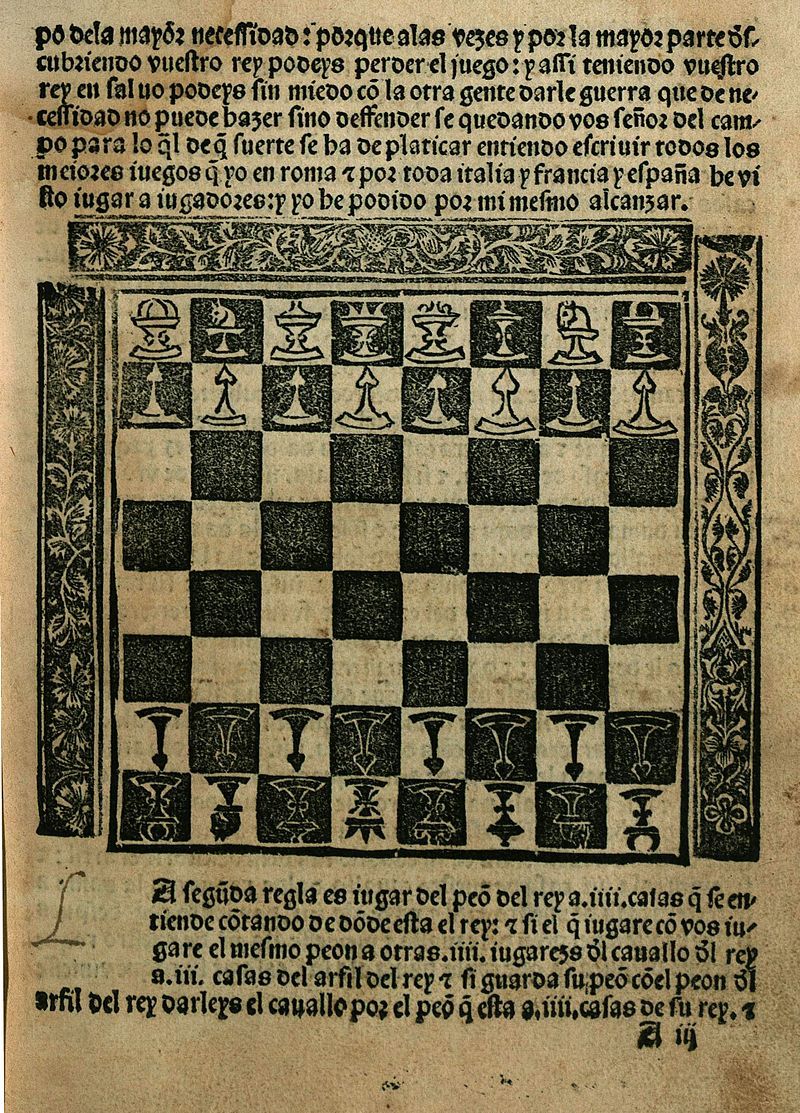 Anyway! The main reason I write this is because I particularly liked one book that I bought recently. The name of the book is Amateur to IM and it is written by an International Master named Jonathon Hawkins (Jonathon Hawkins is now a Grand Master). "A careful study of the endgame sparked the biggest leap forward in my own game" - Jonathan Hawkins. | Photo: John Upham

The wonderful thing about this book is that it has material which is basic but is so very well explained. Also some of the material which I thought I knew so well revealed some very interesting points. I would like to bring to your notice the following position which I think contains a very beautiful point which is not known to even extremely strong players. 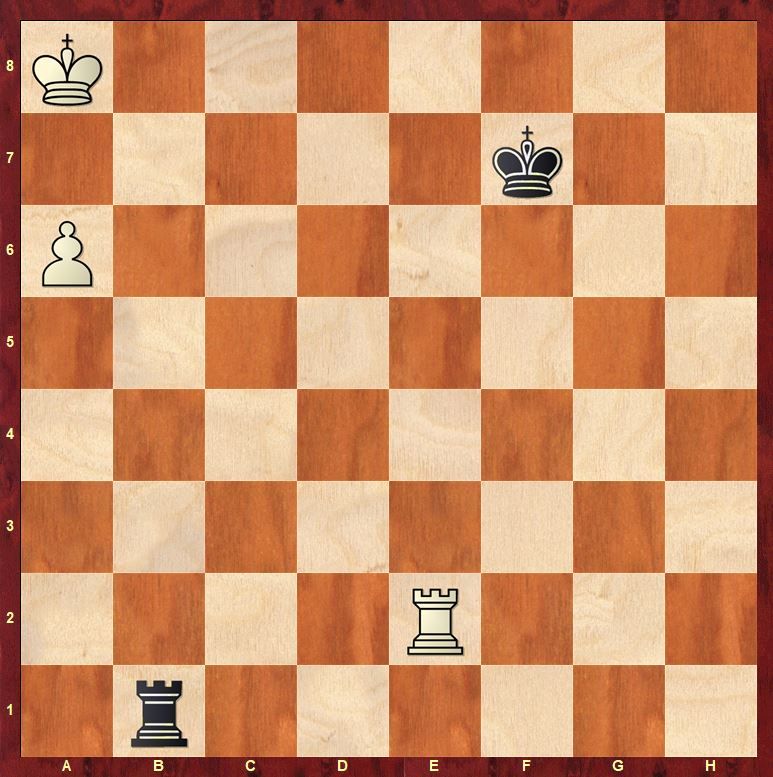 My question to you is this: Its white to play. What will you play?

Just before you close this article by thinking that it is too basic, I must warn you to have a deeper think! If you ask any knowledgeable chess player, his answer will most probably go something like this.

"The black king is cut off by 4 files from the pawn.This is the required distance to win the position. Hence this is a theoretically winning position and hence the right move is 1.a7."

For those who did not know how to win this position, here is the winning technique which is not so straightforward.

So, yes this position is totally winning for white. a7 is a theoretically winning move. Why in the name of God then did I give you this position? Is it an April fool trick? Or am I trying to waste your time?

Certainly not! Here's the difference between a position that you know well and one which you know very very very well. After 1.a7, the problem is that White is winning but Black has this amazing defensive resource.... 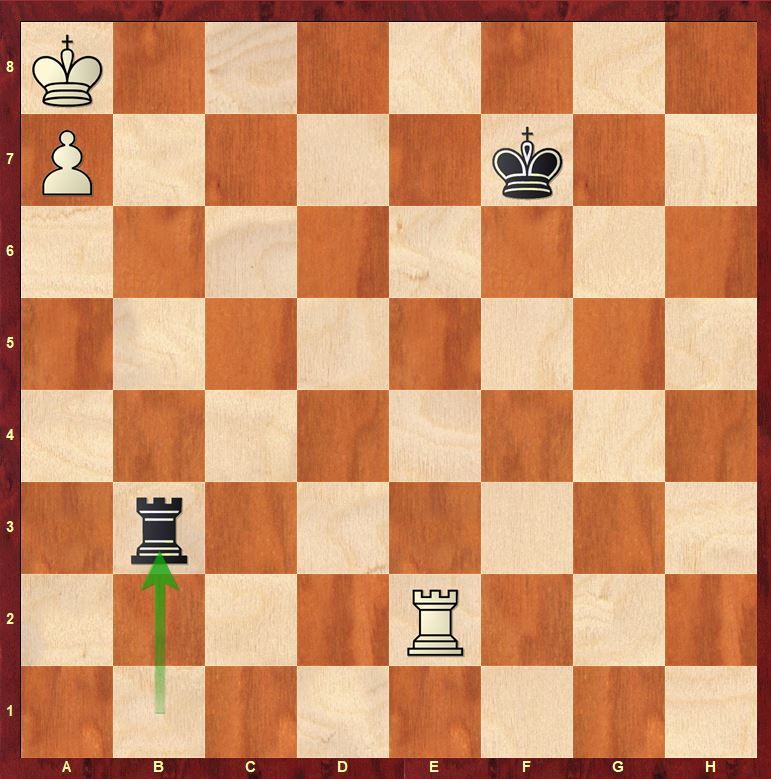 The rook on the 3rd rank is very well placed because after white sacrifices his rook to make a queen, white will not be able to win the black rook and will have to win a queen vs rook ending. Here is how it will pan out. 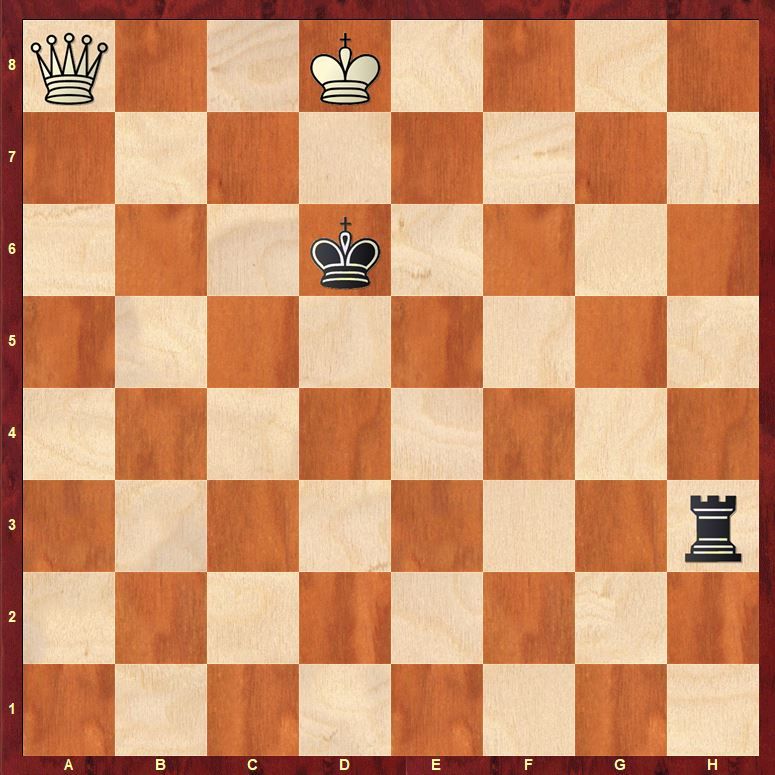 White has made a queen but there is just no easy way to win the black rook on h3. White will have to play another 30-40 moves and show some good technique in order to take  the full point home.

Let's go Back to the initial position. From what I have shown, it will be very clear to you now that the right move for white in the first position is to play... 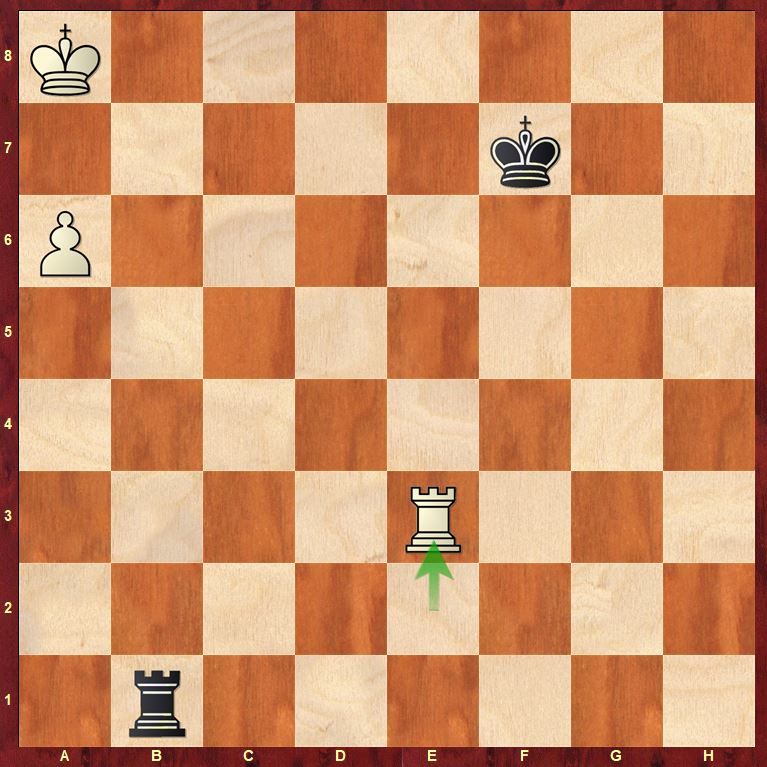 Denying Black the very important third rank! This makes sure that White will not have to play the Queen vs Rook endgame and will be an entire queen or rook up! Black now can wait on the first rank but as we know the rook on the first rank will be lost. On the 2nd rank too the rook is lost in queen checks as will be shown. And the 4th rank is useless as it allows white king to come out. Hence black is absolutely lost here! Here are the moves:

So, here is my question to you, what would you play on the first move? 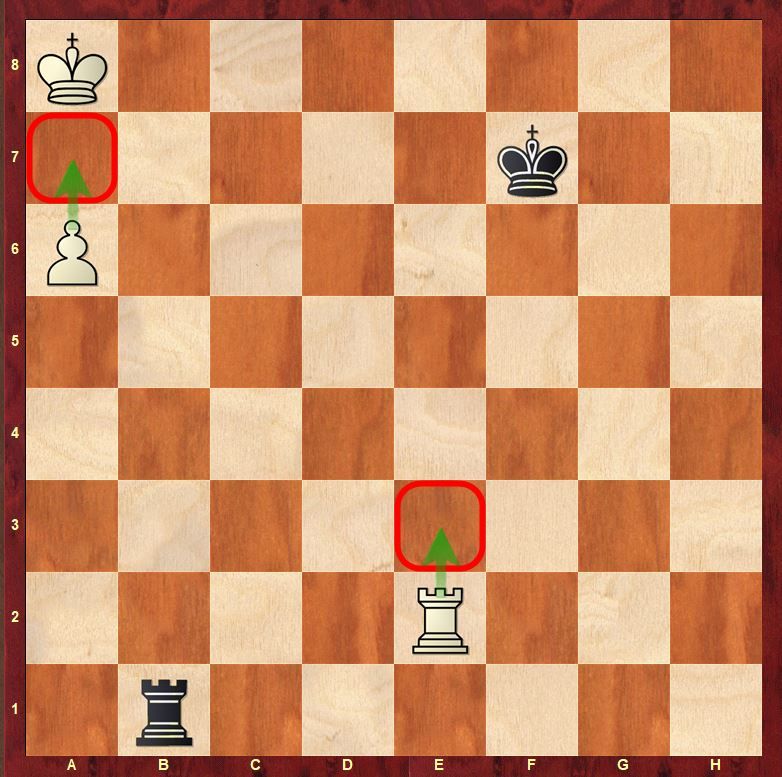 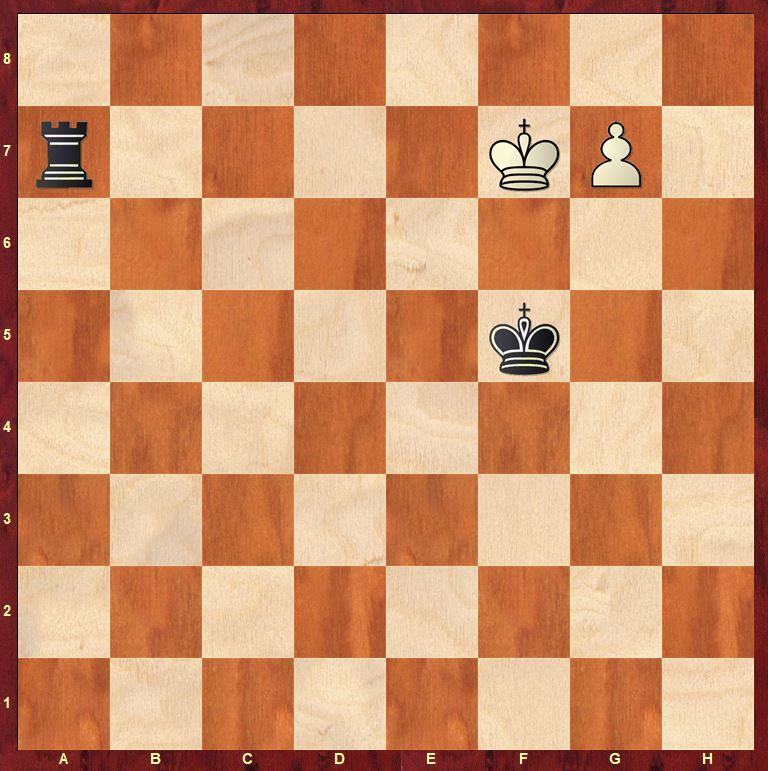 Its White to play and draw. How would you do it?

There are 2 ways to draw here. The first one is to play 1.Kf8 Kf6 2.g8=N+ and this position is a theoretical draw.

But as Karsten Mueller says 1.Kg8! is good technique! Kg6 2.Kh8! and after black takes Rxg7. It's an immediate stalemate!

You might argue with me that Kf8 and Kg8 are relatively of the same merit as they both lead to the same end, but I say that the means to reach the end are also important. While one gives the opponent some hope for a positive result, the other gives the opponent absolutely no chance!

The definition of technique in the dictionary is something like this:

A way of carrying out a particular task, especially the execution or performance of an artistic work or a scientific procedure.

If you carry out the procedure well, the result is bound to fall in place! That's what good chess technique is all about!

I hope I have convinced you that the position which I had given to you at the start is not so trivial as it seems at first glance and that 1.Re3! is a move which shows a very high level of technical mastery in the game of chess.