Even though the A group of the Barberà del Vallès Open in Spain was won by the experienced Azerbaijani GM Gadir Guseinov, the Indian contingent in the tournament did not fail to impress with their performance. Erode's youngster IM P. Iniyan, with an unbeaten score of 7.0/9, not only finished clear second in the tournament but also completed his third and final Grandmaster norm. All that remains now is for him to touch the 2500 Elo mark. Among norm makers, there were also the names of Neelash Saha and Kumar Gaurav who scored IM norms. Saloni Sapale completed her final WIM norm to clinch the title! Anuj Shrivatri came very close to scoring an IM norm but a last round defeat dissipated his chances. Om Kadam had to miss out on his norm due to some technical difficulty. Meanwhile, Asia's first Grandmaster, Eugenio Torre inspired all with his presence. ChessBase India Power Group gained a whopping 1355 Elo points in the event. Report from Barcelona.

The 41st edition of the Barbera del Valles concluded with Azerbaijani GM Gadir Guseinov taking the title while India's P Iniyan had to satisfy himself with the second place, half-a-point behind the victor. Going into the final round, both players shared the lead at 6.5 points apiece. However, while Iniyan signed peace in the finale against Italian GM Andrea Stella, Guseinov scored a much needed victory against Spaniard IM Asis Gargatagli to step past the Indian young gun. With a better tiebreak score, Cuban GM Isan Reynaldo took the third place. Among other Indians in the fray, Karthik Venkatraman bagged sixth place while Haryana's Himanshu Sharma finished 13th. 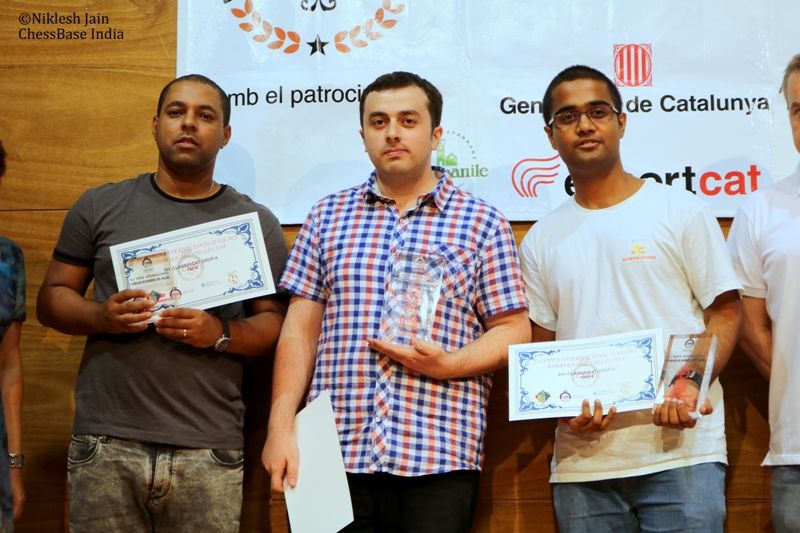 After the event, title winner, GM Gadir Guseinov spoke to ChessBase India about why he thinks India and Azerbaijan will be very strong contenders for the gold medal at the Batumi Olympiad.

He also spoke about his performance and the abundance of young talent in India. 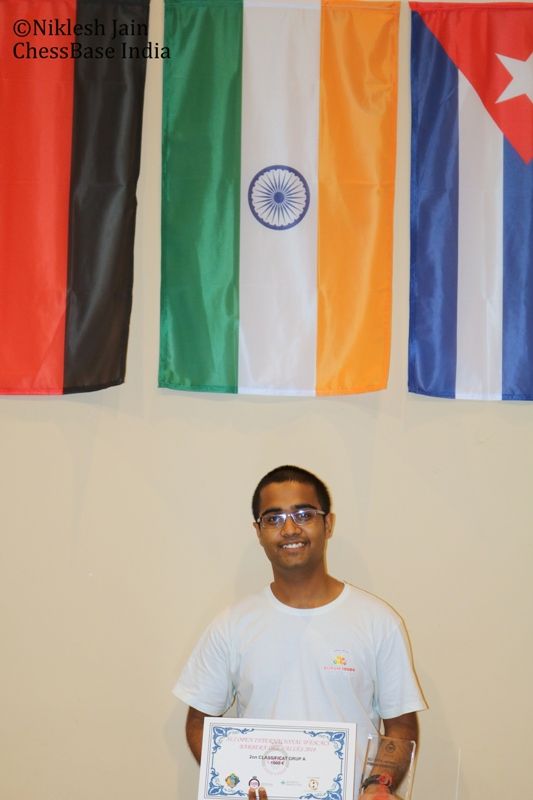 P Iniyan with his trophy and certificate | Photo: Niklesh Jain

The final day was quite a successful one for the Indian players. P Iniyan completed his third and final GM norm and now needs only 20 points to become a Grandmaster. He played phenomenally throughout the event. Had he won his final round game, he could have clinched the title. But the young IM decided to play safe and ensure that he didn't miss the norm. Iniyan hails from the town of Erode and is trained by K.Visweswaran. Here's an article that was published on ChessBase India in May 2017 which gives you more information about this phenomenal young talent. 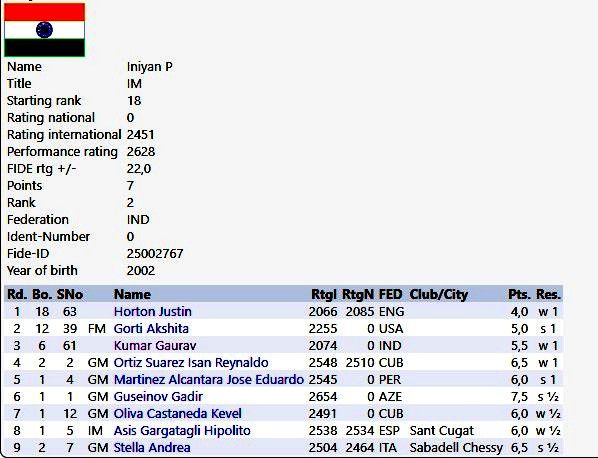 A brief look at Iniyan's performance
Iniyan, who had also scored his first GM norm in Spain last year talks to ChessBase India about securing his final norm 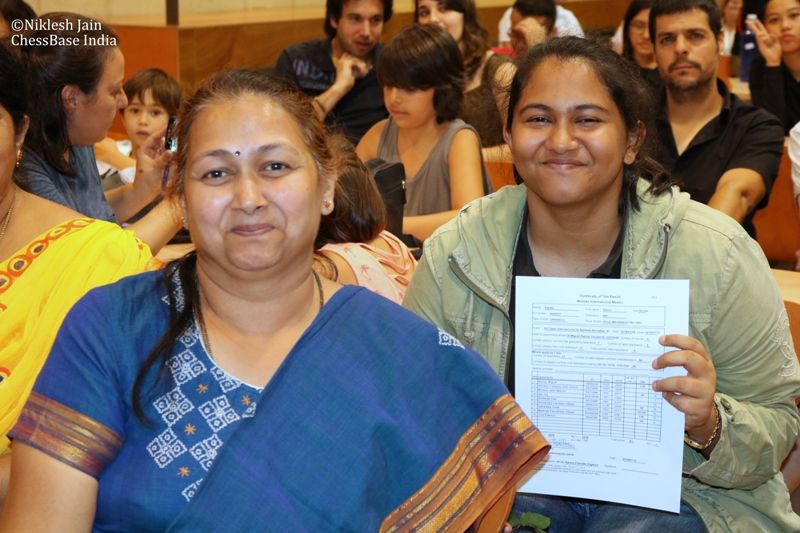 Both Saloni and her mother were ecstatic after she became a WIM! | Photo: Niklesh Jain

Saloni Sapale is India's latest Woman International Master! She had already fulfilled her rating requirement for the title and with her final norm at the Barbera del Valles, she has sealed the deal. She hails from Pune and is trained by IM Prathamesh Mokal.

Saloni talks about her latest achievement with ChessBase India 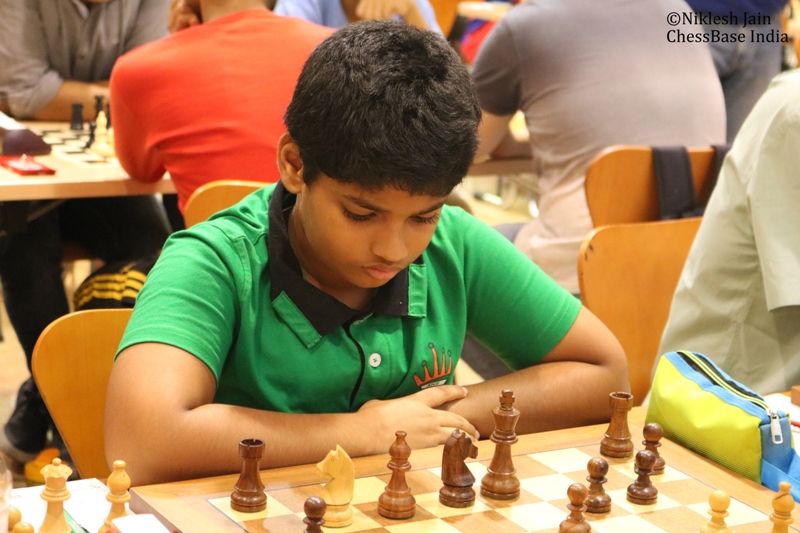 Om Kadam was the find of the tournament

When Om Kadam was identified as a talent by the team of ChessBase India, his rating was just 1850. But Om has some special talents. He is fearless and has a great feel for the game. One cannot really call him a natural talent, because a lot of his success (under-9 national title, under-10 asian title) has to do with his never-give-up attitude. Says Sagar Shah, the CEO of ChessBase India, "When I met Om, I decided to record a video with him. In the video I gave him a position that I thought he would solve in under a minute. It was a simple tactic based on discovered attack. The boy took seven minutes to solve the problem. But it impressed me tremendously. The reason: I have seen a lot of kids get uncomfortable when they don't get the answer. They feel that not finding the move is somehow a measure of their talent. But Om powered on. It didn't matter to him whether there was a video being recorded or not. In general I feel that he had a toughness about him which is quite rare to find in young kids these days. On the other hand, he has many shortcomings as well which need to be fixed apart from his chess. But should happen in course of time."

Om was sponsored by a few individuals who were keen that he goes and plays to Spain after reading this article and ChessBase India Power subsidized a lot his cost including his internal travel in Spain and stay, food etc. The boy went straight from Commonwealth Championships 2018 to Barbera Del Valles Open 2018. And guess what, he travelled alone! The flight staff took care of him. Of course his parents were really tensed about their 10-year-old son travelling alone to Barcelona, but that's the sacrifice they had to make to ensure that he got this new opportunity in his chess career. Om was picked up at the airport by ChessBase India Power head Ankit Dalal and he took him straight to the second round of Barbera event. Om was facing a 2050 rated opponent. He came out within an hour crushing his opponent. From there on Om did not look back. In the eight rounds that he played he scored 5.5/8, beating GM Marius Manolache and also drawing his game against Asia's first GM Eugene Torre. 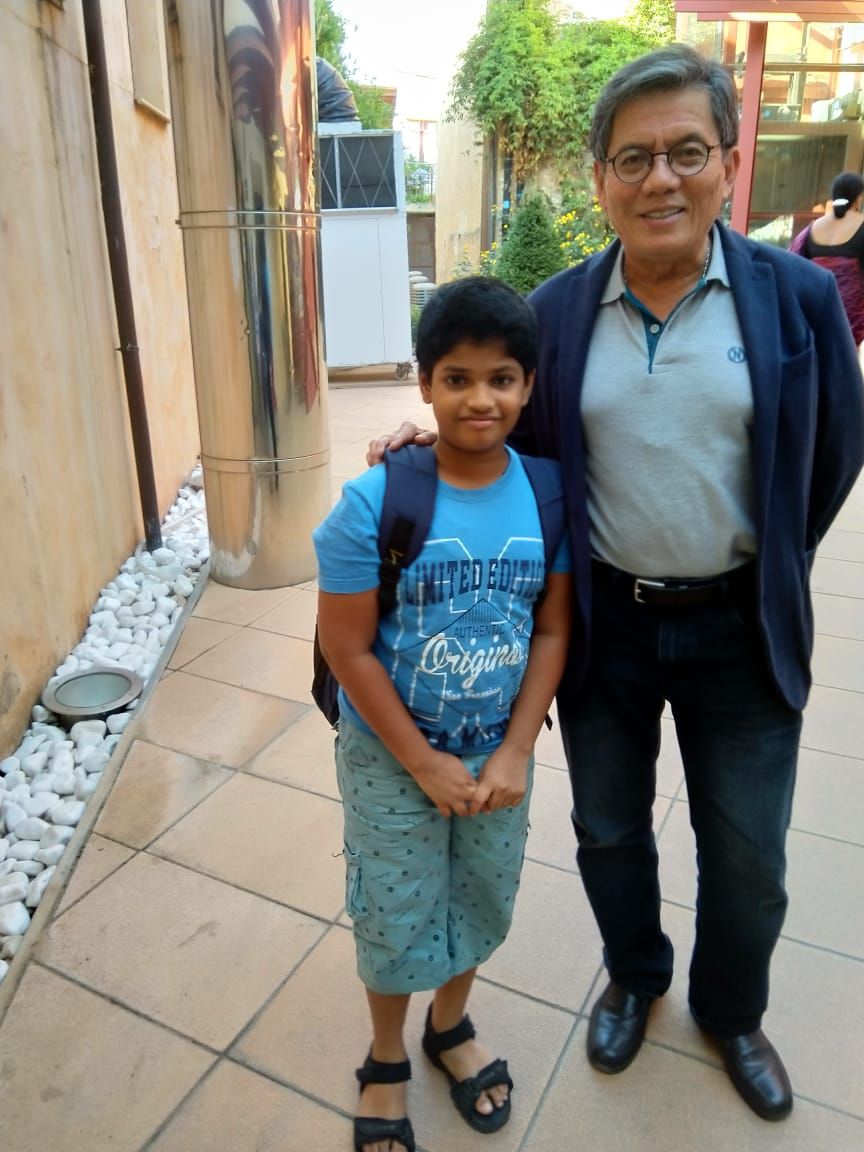 After his game against GM Torre, the Philippine GM said to Om, "You will be world's youngest GM. I am following your journey." These words of encouragement from a living legend like Torre will go a long way in Om becoming a strong player. In his recent training camp with the blind players of Indian, Sagar Shah showed Om's below game to the students without revealing the name and rating of the players. After the game was over he asked the players about what White's rating would be approximately from the strength of his moves. Everyone unanimously said 2450+. One boy even went to say 2700! Of course it was Om who had a rating of 1836. 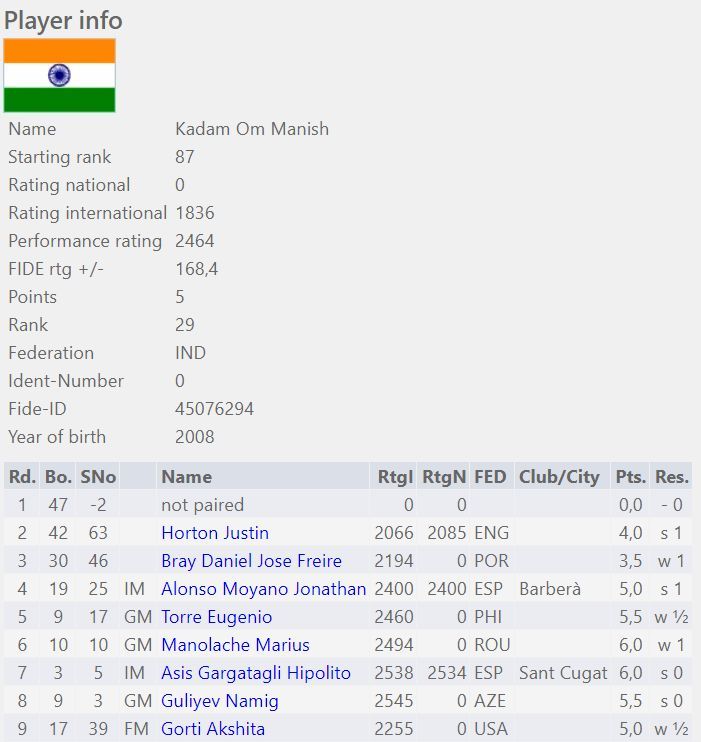 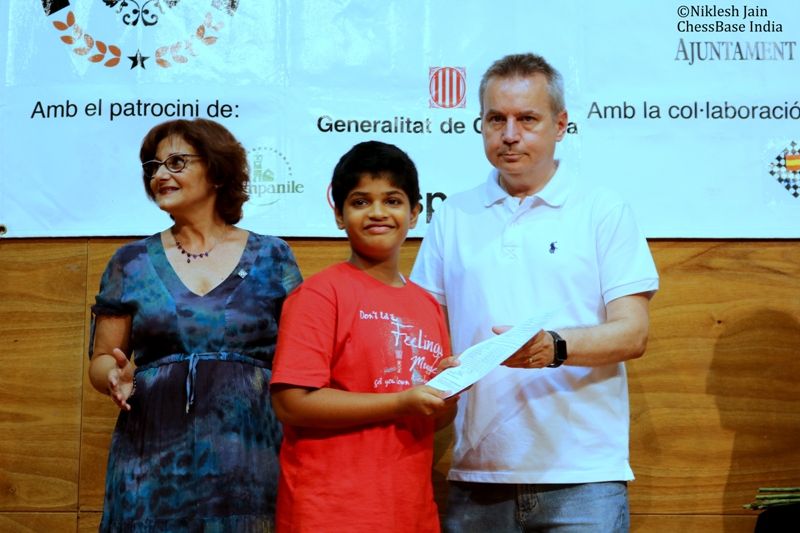 Of course everyone in India rejoiced over the 10-year-old making his maiden IM norm. But there were certain technical issues which came to light later. We got a confirmation from one of India's top arbiters Gopakumar Sudhakaran that this norm would not be counted. The rule is: "If a player himself is absent he does not have 9 games which are necessary for a norm. In case the opponent is absent, then the result may be counted as a 8-game norm."

Of course it came as a bitter disappointment that Om's norm was not counted, but still it was a big achievement to play up to that level. We are very sure he will achieve it very soon. A huge thanks to all the donors - Mayur Gondhalekar, parents of Shravani Patil, parents of Raahil Mullick, Abhinav Shetty and many others who made Om's dream of going to Spain come true. There is also an Indian GM who does not want his name to be revealed, who supported in a big way. 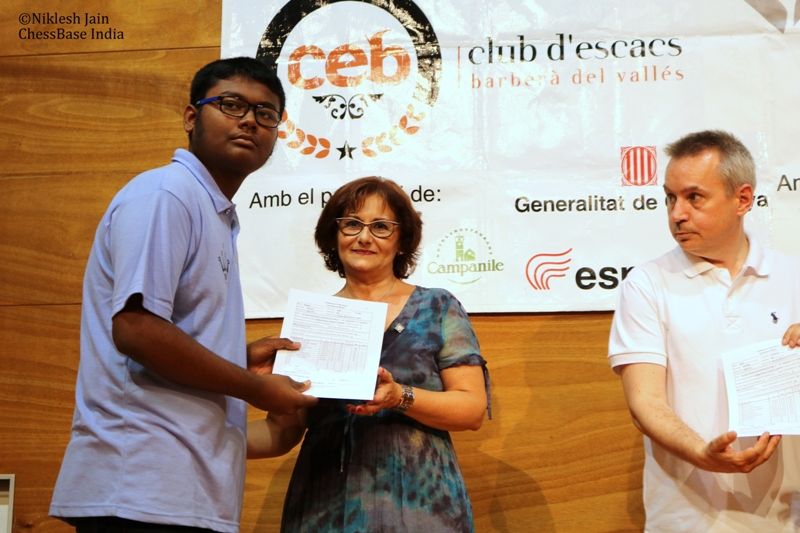 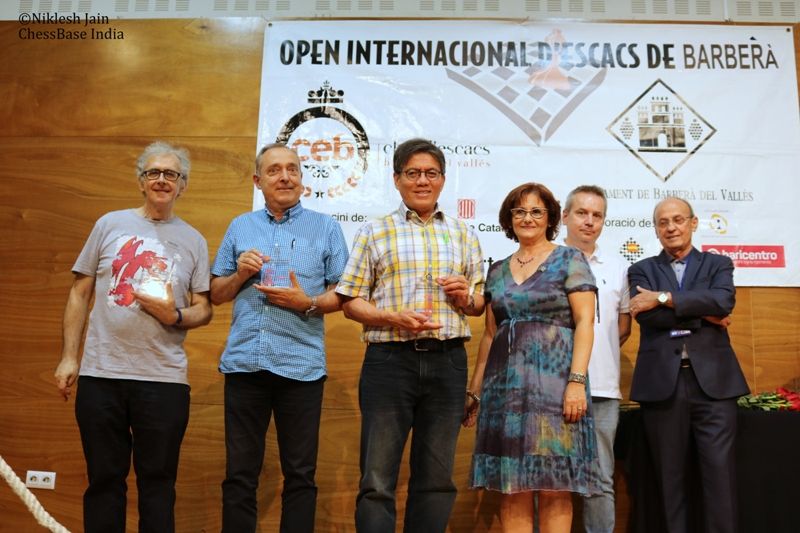 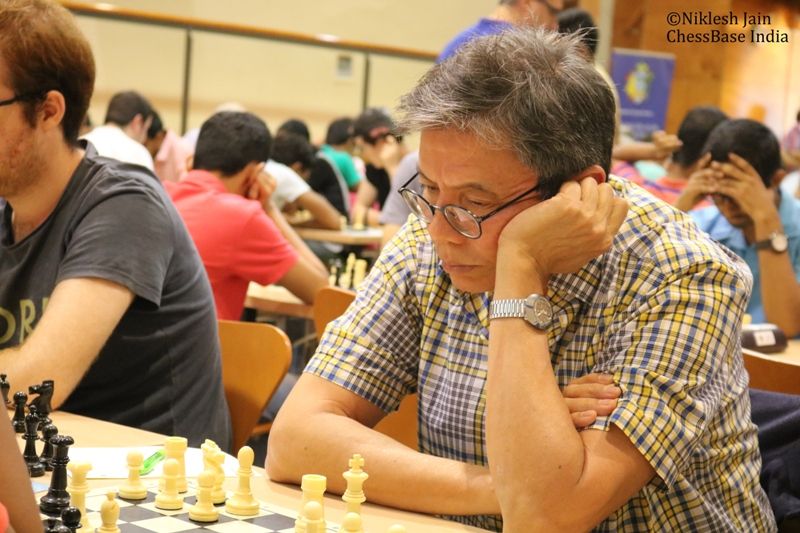 In the eighth round of the event, GM Eugenio Torre won in merely 13 moves against the young Indian FM Mitrabha Guha. What did he have to say about this victory, find out in the following video.

A special bond: Asia's first Grandmaster, GM Eugenio Torre is quite a popular figure in Indian chess circles. When his Indian fans met him in Barbera, he won the hearts of all with his friendly and cheerful nature. He also shared his wise opinion on the present state of chess and what lies in the future. Stay tuned for our interview with him. 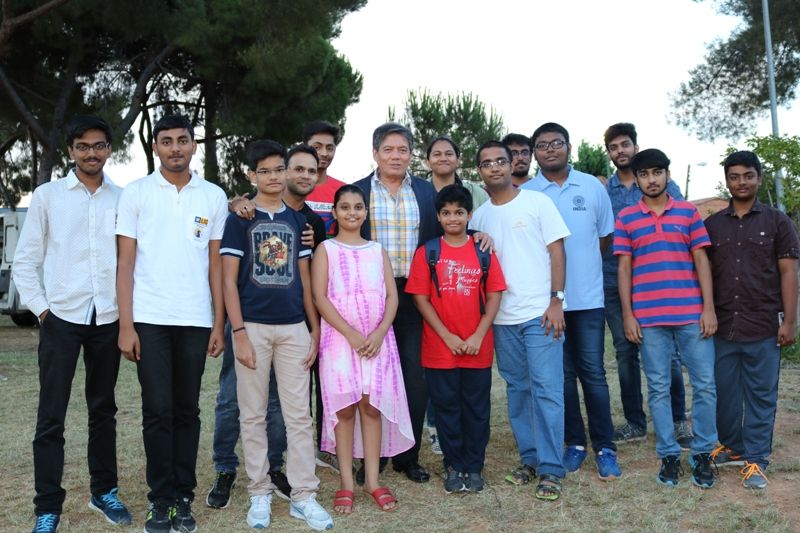 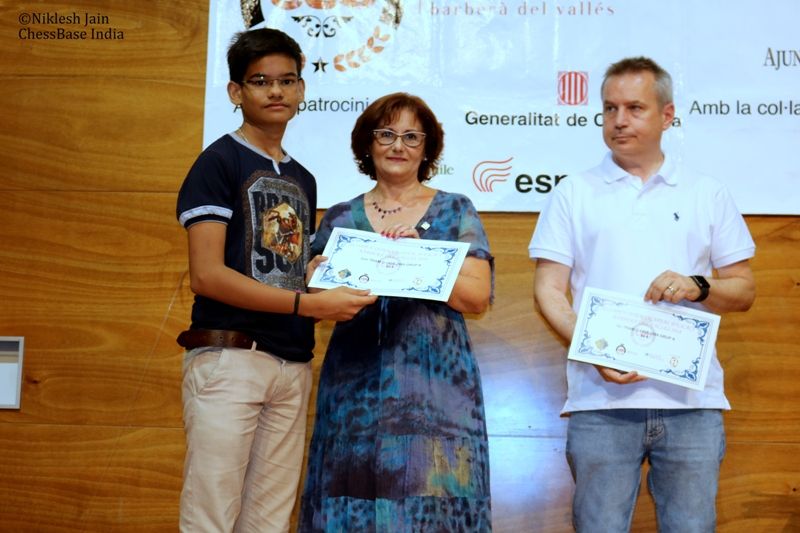 14-year-old Anuj Shrivatri missed his IM norm by a heartbeat. Had it not been for his final round loss to IM Raghunandan Srihari, the boy would have succeeded. Nevertheless, he had a lot to be proud of as he earned 117 rating points! 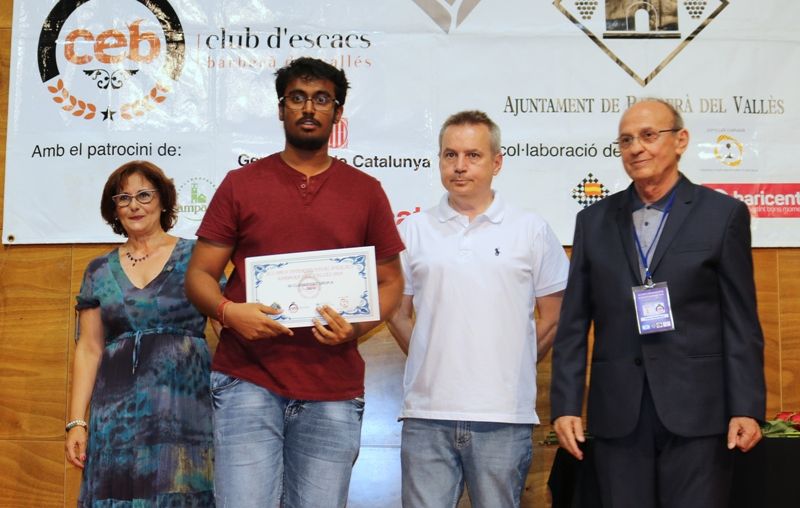 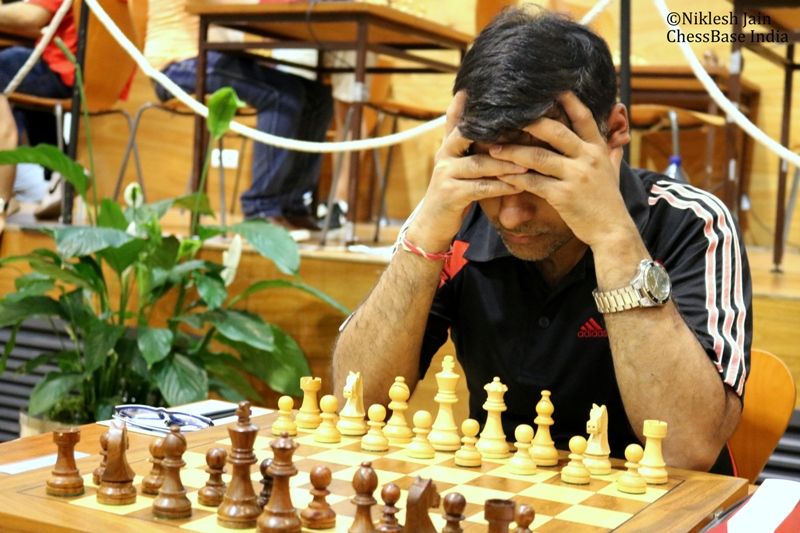 Defending champion of the Barbera del Valles, GM Himanshu Sharma did not do as well this year. Scoring 5.5/9, he finished 13th. | Photo: Niklesh Jain 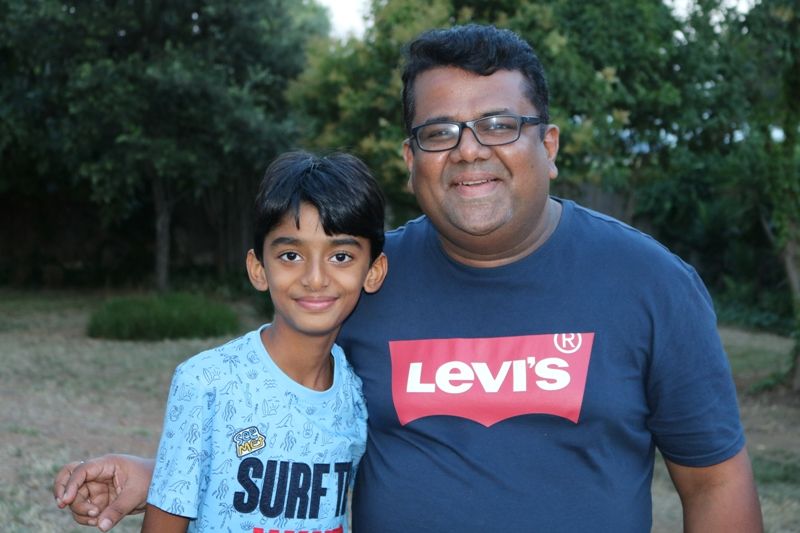 This Spanish trip proved to be quite a successful one for FM Saurabh Kherdekar. Once again he was seen heading strongly towards the 2300 rating mark. His student, Aniket, who has joined him on the trip, also earned quite a few Elo points. 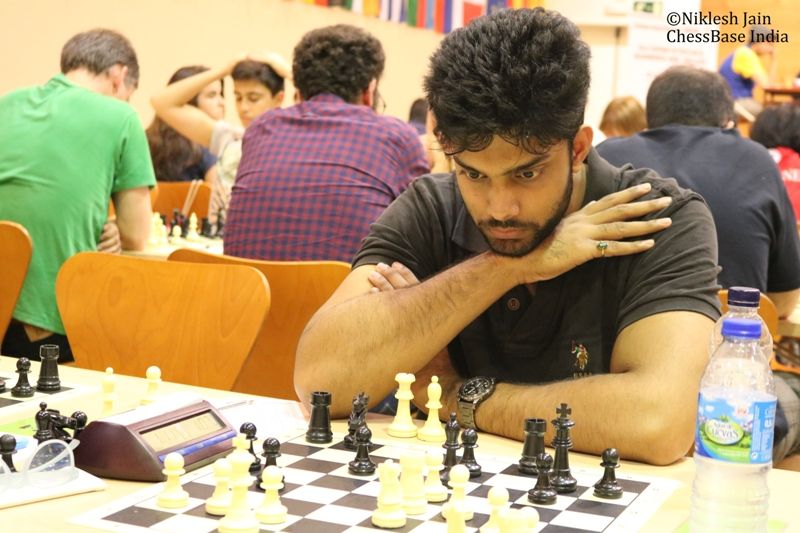 B Group of the tournament was won by Madhya Pradesh's Anshul Saxena | Photo: Niklesh Jain

Madhya Pradesh lad, Anshul Saxena recently completed his engineering degree. But before going out job hunting he decided to play in the Catalonian circuit. Back then, little did he know that he would end up winning the B group of the event. With this feat, he has also gained 90 rating points! 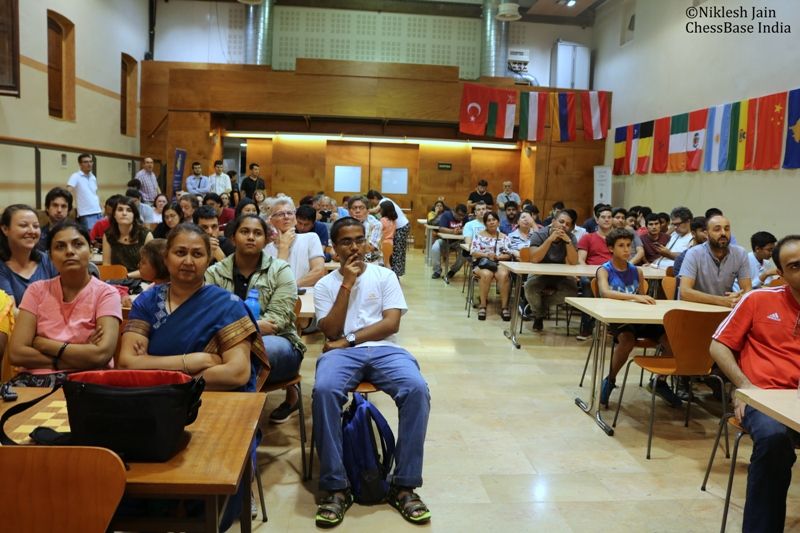 An impression from the prize giving | Photo: Niklesh Jain 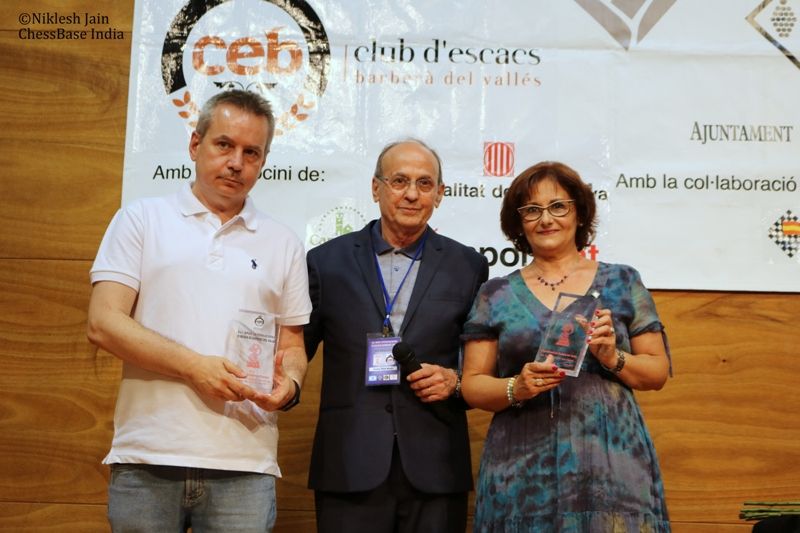 The tournament Director, the head of Catalonian Chess Association and the guest, all came together to give the event a memorable end! | Photo: Niklesh Jain

The ChessBase India Power Group Tour headed by Ankit Dalal is a novel concept launched by ChessBase India. We have 19 players who are part of this tour and their performance has been truly excellent. In two events the total rating they have gained is a whopping 2545 Elo points! 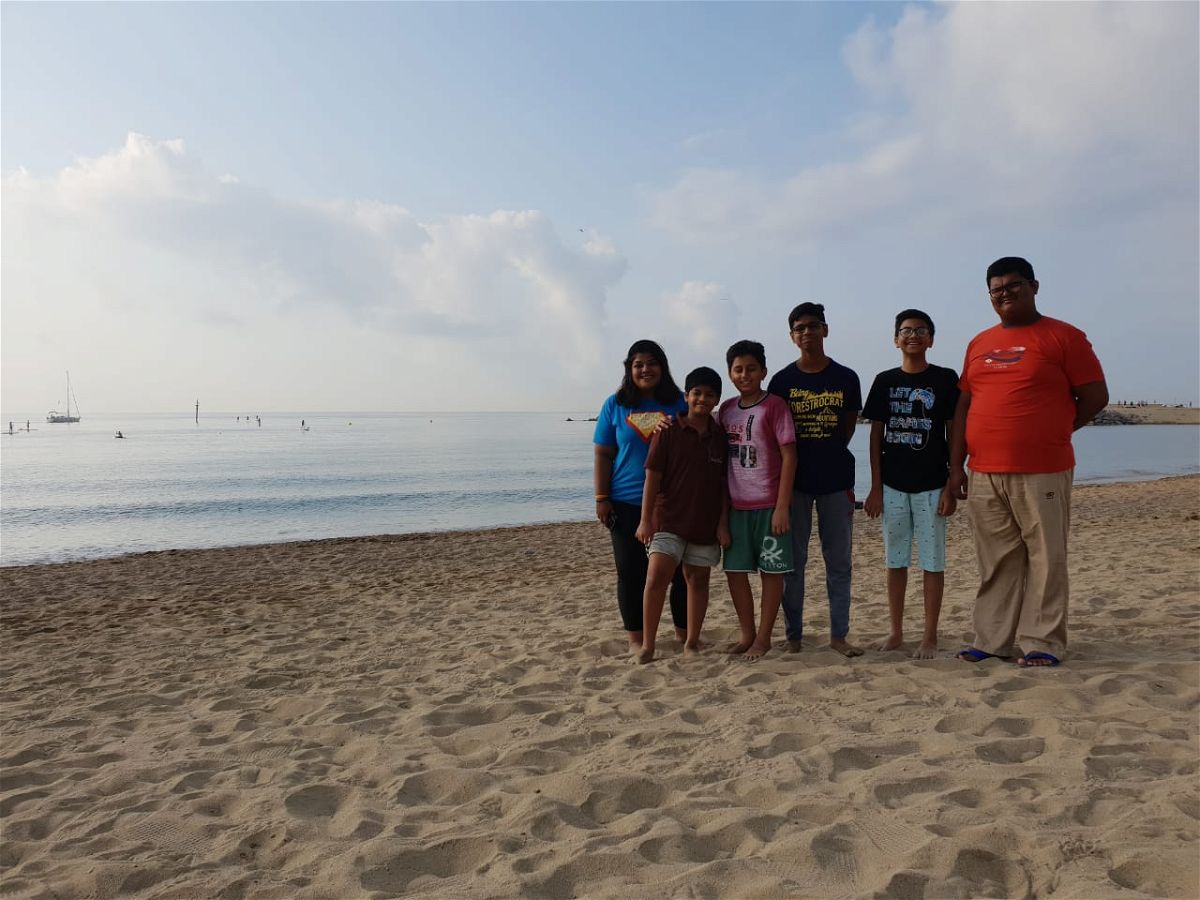 Of course, it is not just all chess! The group taking some time off on the beach! 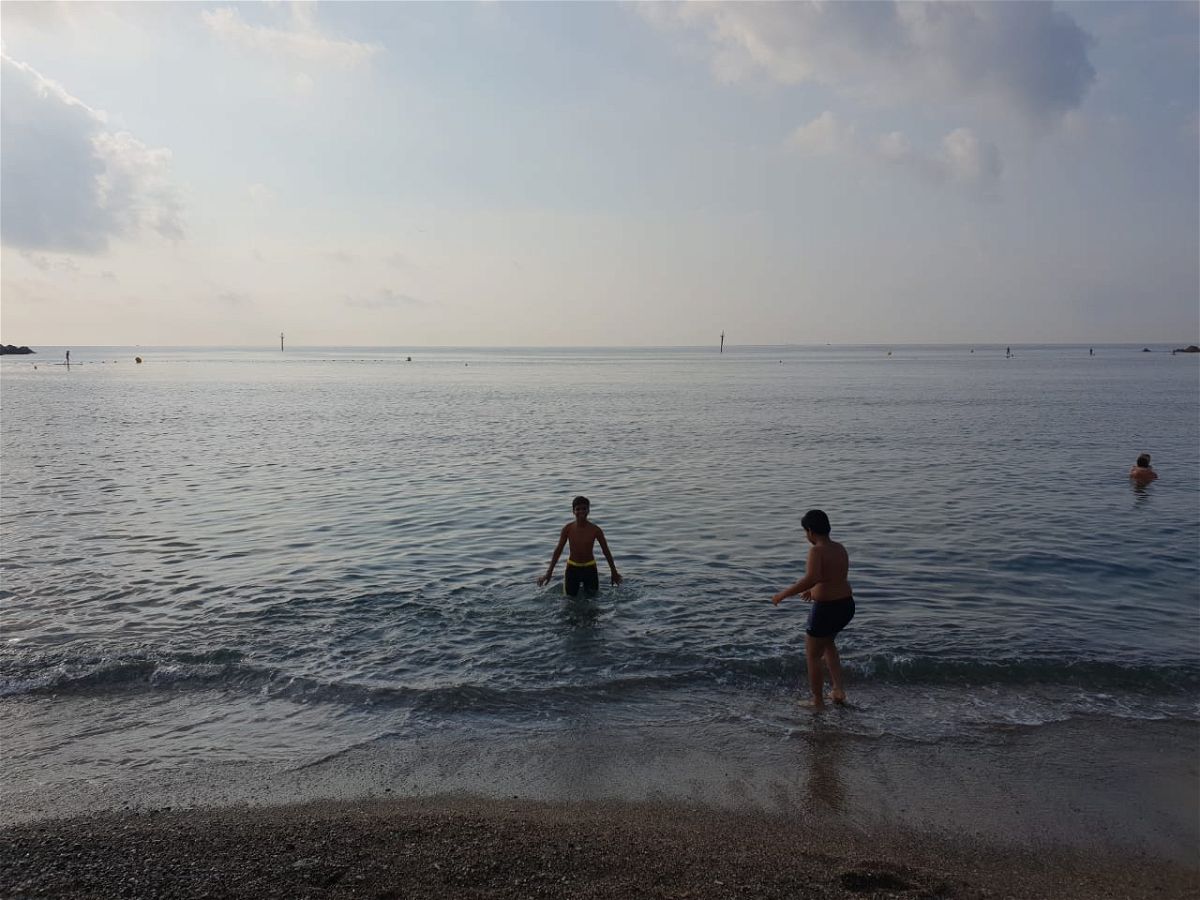 You have to visit the Catalonian beach if you haven't done it already!

Other Reports on Catalonian Circuit