The Bangkok Chess Club Open 2018 had many surprises in store. There were ten GMs above the rating of 2500 including some very strong grandmasters - Nigel Short, Hrant Melkumyan, Jan Gustafsson etc. However, the first prize was taken home by Novendra Priasmoro - an Indonesian player, about whom no one knew anything much. The second place was won by India's Deepan Chakkravarthy - we show you one of his blistering wins. And the third place went to 11-year-old D. Gukesh who made his maiden GM norm! Indian talent Rithvik Raja achieved his maiden IM norm. All this and more in our final report from the Bangkok Open 2018.

Indonesian chess has always shown big promise, but has failed to deliver. It speaks volumes about the new and upcoming talents of the country, when the 53-year-old legendary Utut Adianto is still the highest rated player with an Elo of 2566. Adianto no longer plays chess and is engaged in political work, but whenever he does, like in Baku Olympiad 2016, he is capable of delivering powerful performances (5.0/6). GM Susanto Megaranto showed a lot of promise when he was young, but now at the age of 31 and a rating of 2528, it doesn't seem that he will be able to go beyond Adianto's rating. In a country where chess is perhaps the most popular sport (Yes! You see people playing chess just about everywhere on the streets!) why is it that Indonesia is unable to deliver a world beater?

Well, the reasons can be many - from lack of motivation to lack of exposure to lack of finances. However, there is one lad who is clearly superior than all his peers. That's Novendra Priasmoro - the 19-year-old talent who won the Bangkok Chess Club Open 2018 ahead of many strong grandmasters. 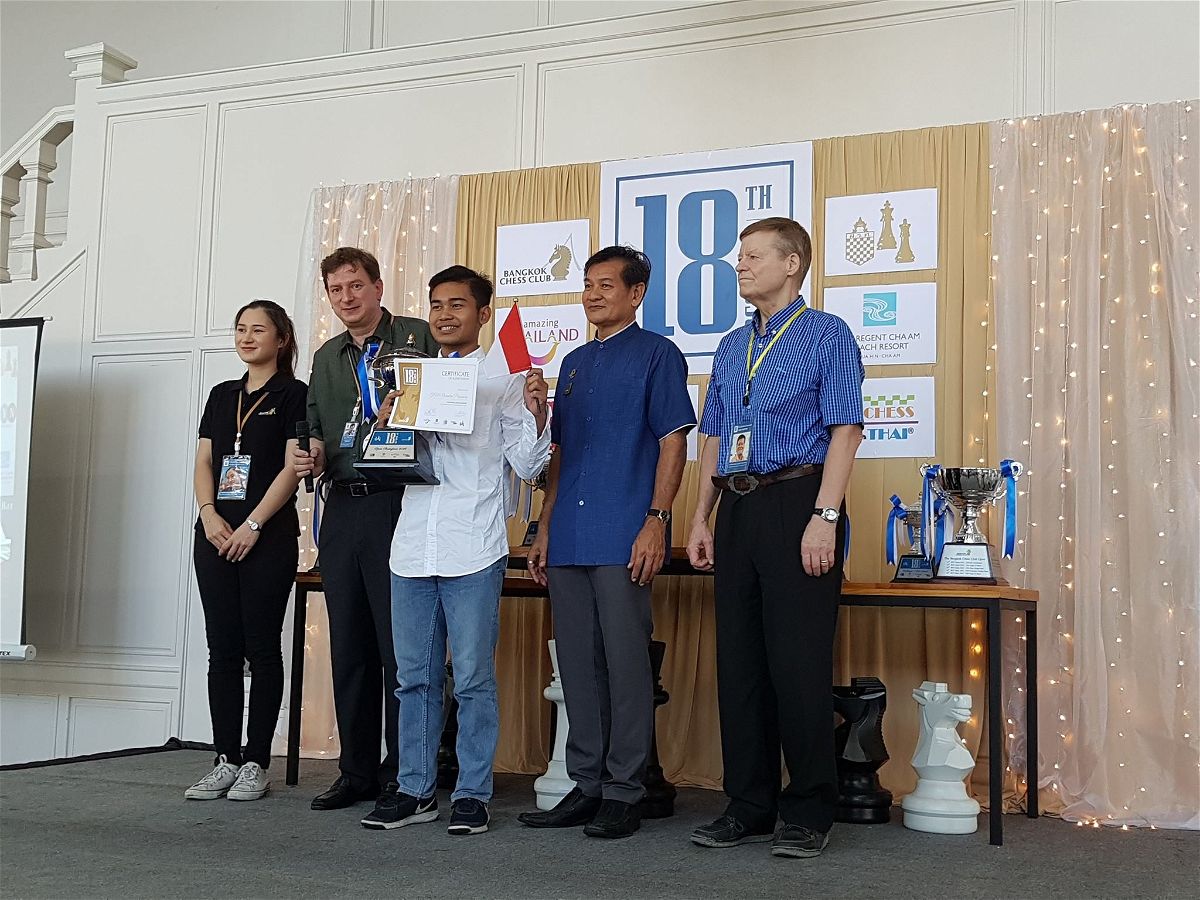 Novendra Priasmoro - FM (he has completed his IM formalities) with a rating of 2449 won the Bangkok Open 2018 | Photo: Peter Long

I met Novendra in 2017 when I played the Japfa closed IM norm tournament in Jakarta. Novendra stood out from the rest of the players thanks to his brilliant tactical acumen. All that he loved to do in just about any position was to find some complex crazy idea that would throw his opponent off balance. The confidence with which he would make his moves, the speed at which he would spot the tactics, convinced me that Novendra would become a 2600+ player if he put in the right effort. I was not the only one of this opinion. I think even Novendra knew very well that he was capable of great things if he just avoided the distractions that a teenager would usually have and put all his energy on the chess board.

Priasmoro seems to have taken everyone's advice seriously. The Indonesian talent not only won the Bangkok Chess Club Open 2018, but did so in an extremely convincing manner beating GM Ly Mouthun, top seed GM Hrant Melkumyan and GM Anton Smirnov. He finished with 8.0/9, half a point ahead of the nearest rival. 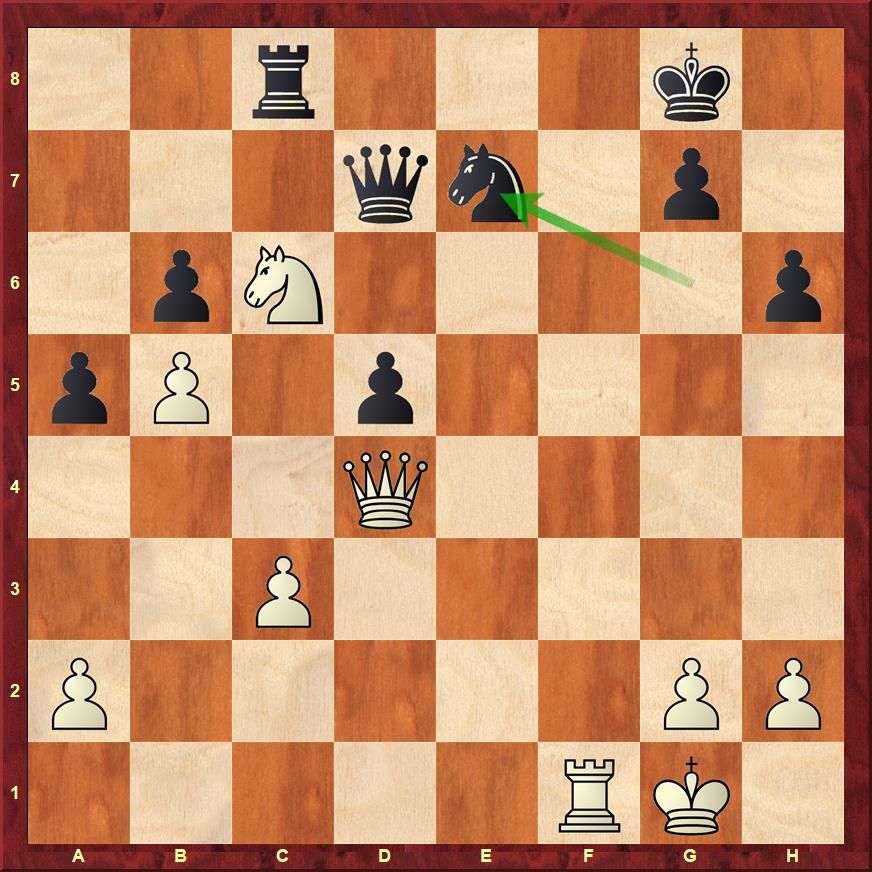 A typical Priasmoro tactic is hidden in the position. Can you spot it?

Here's his win against the top seed of the event Hrant Melkumyan:

I predict a bright future for Novendra. If you are playing against him, be wary of his tactical abilities. In any case I think he is working very hard on his overall game. Such a performance (winning the Bangkok Open) is not possible without a well-rounded game. Here's a small video of Novendra which I captured back in May 2017 where he gave a blindfold blitz exhibition in front of hundreds of people against a strong opponent. He had absolutely no problems visualizing the board and won the game with ease!

A blindfold blitz exhibition by Novendra in Jakarta in 2017 | Video: ChessBase India 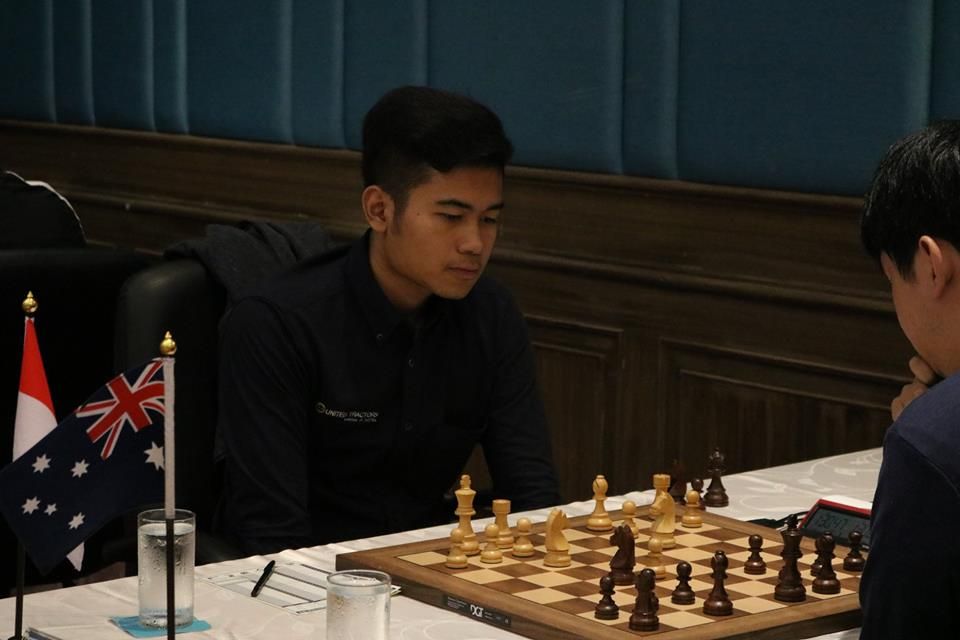 You give up something, to gain something - Deepan Chakkravarthy 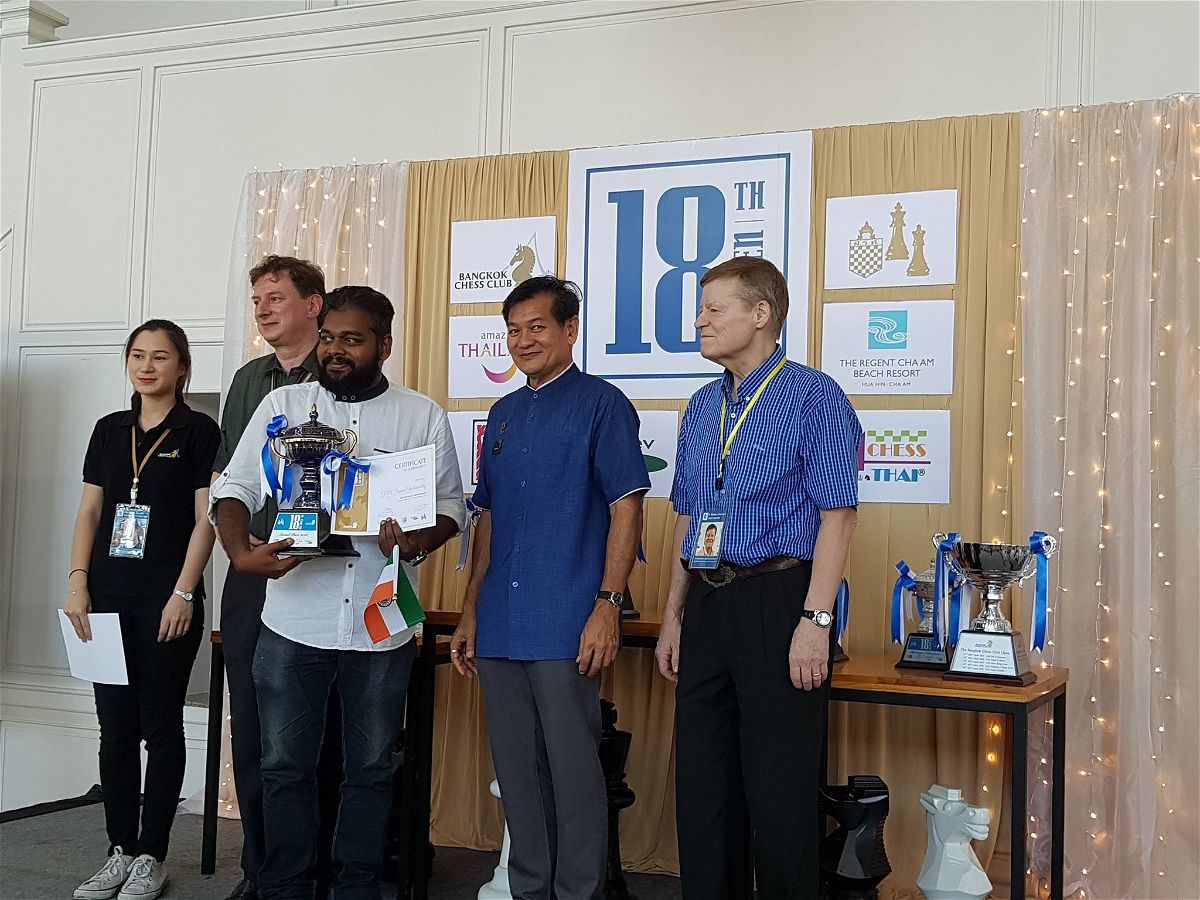 Deepan Chakkravarthy was the runner-up of the tournament scoring 7.5/9 | Photo: Peter Long

Deepan Chakkravarthy's style of chess off late has been nothing but refreshing! The Chennai GM has a simple maxim - you give up something, in order to gain something. And this knowledge has come to him after years of self-learning. Deepan was an aggressive player in his younger days, but after becoming a GM (at the age of 19) he began to play chess in a conservative manner. He adhered to the positional principles, didn't calculate as hard as he could, played on his positional intuition and in general was stuck in the 2450-2500 zone for many years.

I am not sure what happened, but it seems Deepan grew tired of his style of play. He decided to go back to his old self - the original Deepan. He began to understand the golden principle in not just chess - but also in life: 'You give up something, in order to gain something'. Chakkravarthy started to give up his comfort of having things under control and started creating chaos on the board. "Having things under control on the board is an illusion", says Deepan. "If you do not let things spin out of control, the chances of your opponent making mistakes is also minimal." With this attitude Deepan has started playing some highly enterprising chess and the result is here for all to see. He has surpassed the rating of 2500 once again and is confidently moving towards 2600 on the Elo scale. 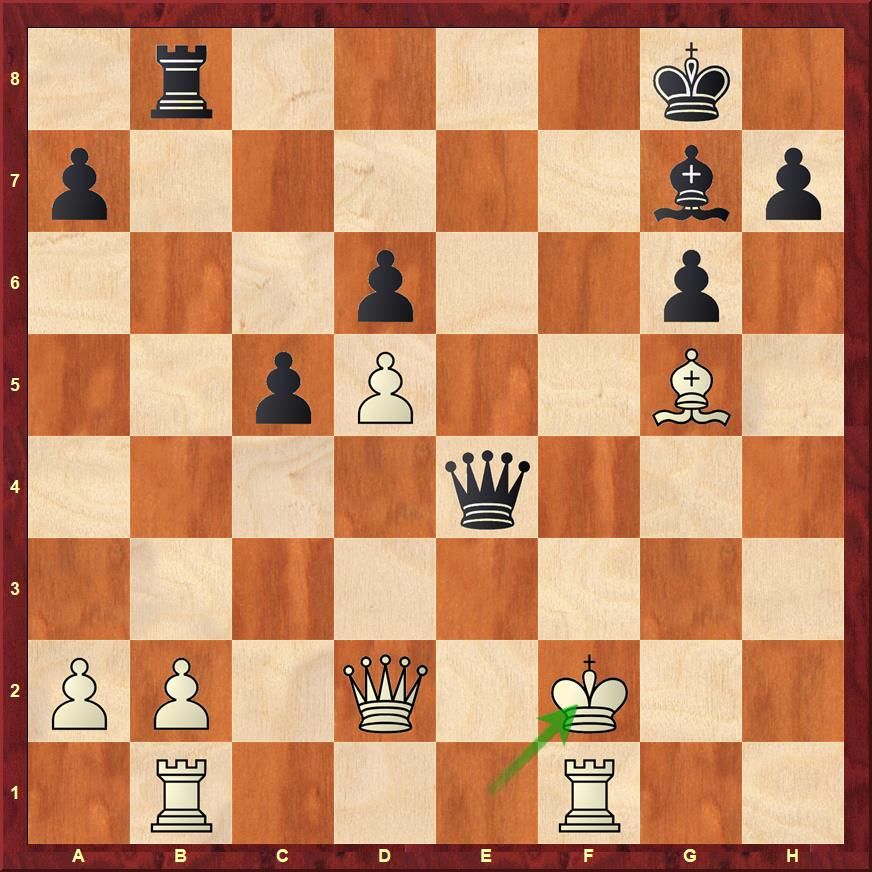 White's last move was Kf2. Only one move wins for Black here. Can you find it? (Solution in the annotations below)

You have to let go off the illusion of keeping control! To make the above s point clear, I would like to show Deepan's game from the fifth round. Pay special attention to the move ...b5, from where all the chaos began! 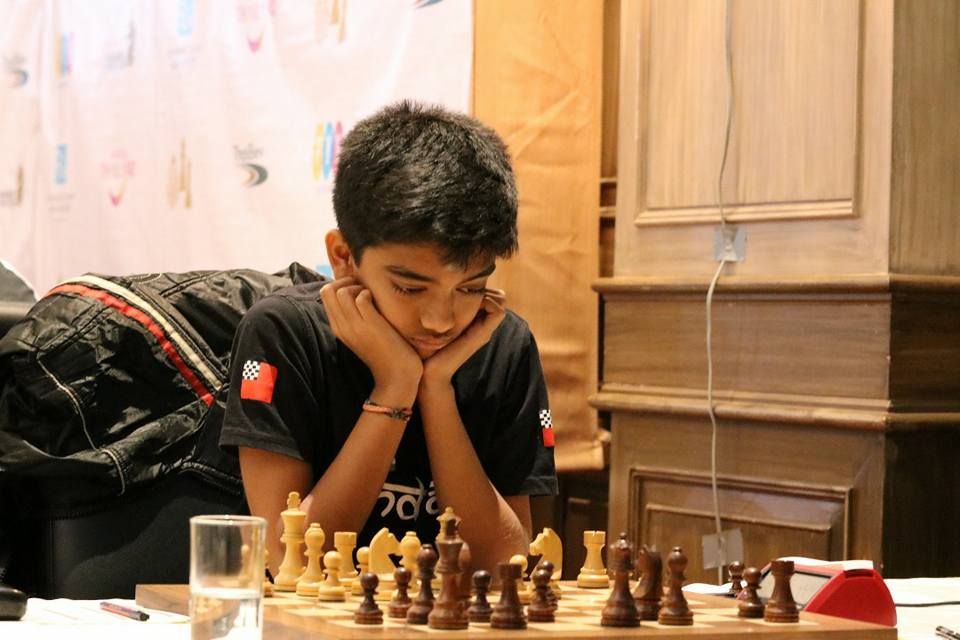 After drawing Mitali Patil (2071) in round two, it seemed as if Gukesh was burnt out after playing so many games at the Asian Youth 2018. But that was not the case as all that Gukesh loves to do, day in and out is to play chess. In the fourth round, we had quite a controversy. Gukesh was playing against Nigel Short. The former World Championship Challenger showed his class and soon got a winning position. However, tenaciously Gukesh held on and tried his best to make Nigel's task as difficult as possible. Short was two pawns up but due to the opposite coloured bishop scenario, the win was not trivial. Yet, we can be sure that a player of Nigel's calibre would convert that position to a win.

Gukesh vs Short, Position after 58 moves 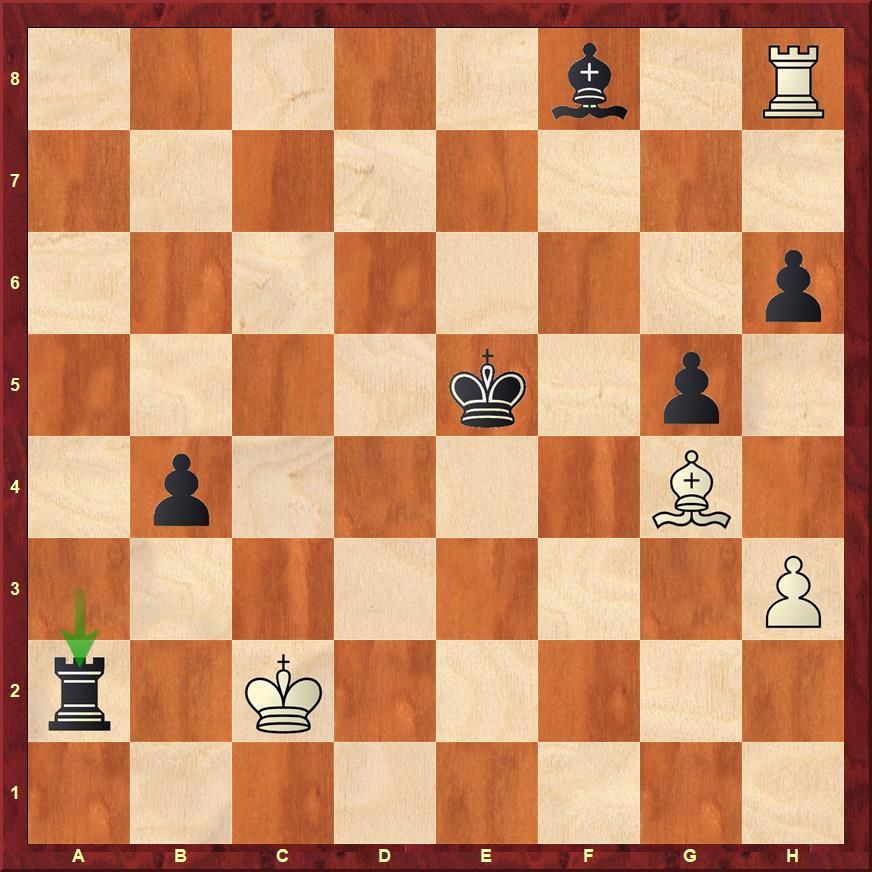 But on move 58, disaster struck. Nigel played the move ...Ra2+ and forgot to press the clock. Nigel's time ran out and Gukesh won the game. After the game, Nigel was quite upset and wrote on Twitter, "Lose with dignity they say. I will try better next time - although it is a bit hard when your opponent is fully aware that you have not pressed your clock (in a winning position) and jumps up and down with glee the moment your flag falls."

We asked Rajinikanth, Gukesh's father about the incident. He said, "Gukesh did know that Nigel had not pressed the clock. When the flag fell he got excited, stood up and called the arbiter. This was a very unique incident where Gukesh couldn't control his emotions. Usually, he is extremely calm on the chess board. Nigel left without signing the scoresheets, so Gukesh ran after him to get it signed. The arbiters later called him (Gukesh) back. After the game ended many people came to congratulate Gukesh but he just told everyone that it was because of the flag fall and did not boast about the victory. We were very happy when we got to know that Gukesh has got a chance to play a great player like Nigel. It's unfortunate that it ended in an unexpected way."

The Facebook post written by us on this subject on the ChessBase India page generated quite a few reactions (50+ comments) which you can read below:

It is still open to debate whether Gukesh's behaviour against Nigel was appropriate or not. But, the way he took his opportunity and converted it into a GM norm is something quite amazing! Gukesh drew his fifth and sixth rounds against GM Ly Mouthun and IM Haridas Pascua. In the seventh and eighth rounds he pressed his foot on the accelerator and scored two fine wins over GM Leandro Krysa and IM Kevin Goh Wei Ming. In the game against Wei Ming, Gukesh positionally outplayed his experienced opponent. This game was quite well played right from the opening until the endgame after the Singapore IM made an error in the opening. 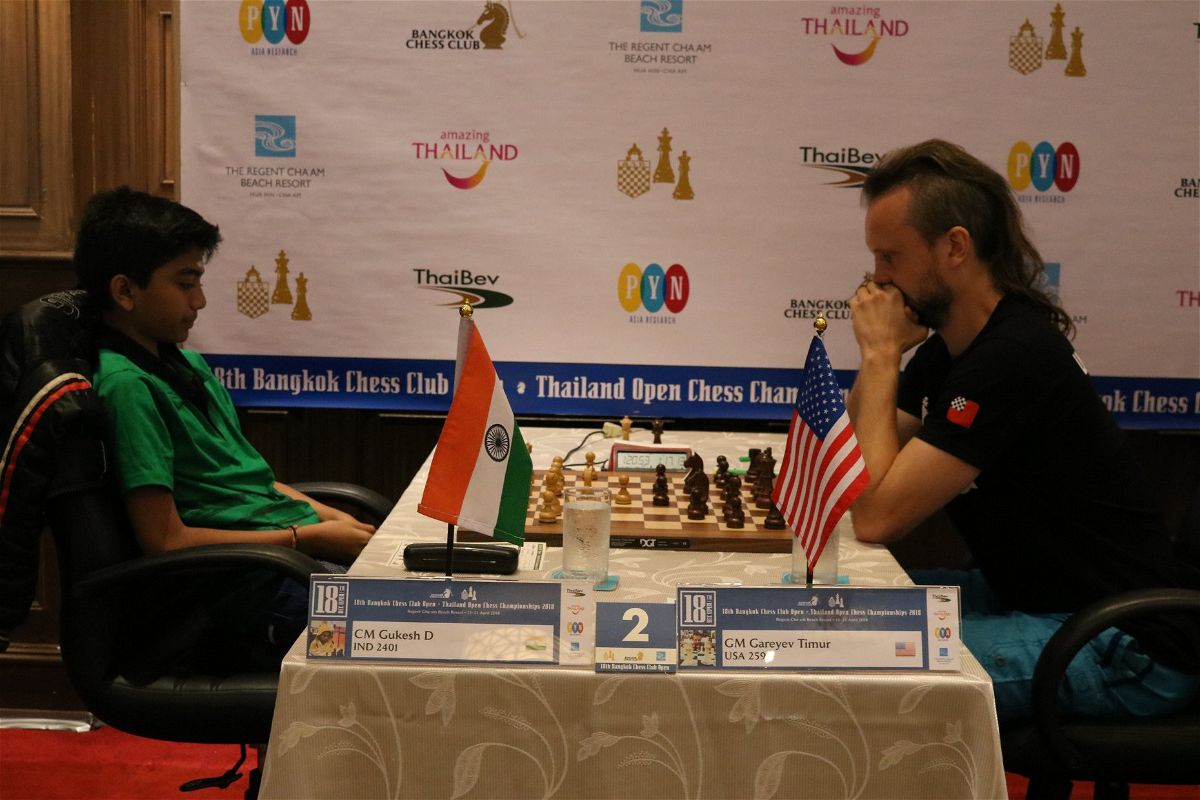 In the final round Gukesh needed a draw against the blindfold king Timur Gareyev and he managed to do that without too many difficulties to score his GM norm | Photo: Peter Long

Gukesh has scored his first GM norm even before he has turned 12 (his birthday is on the 29th of May). With IM title already achieved and also his first GM norm, Gukesh is racing towards the GM title. Gukesh's style of play has been much different from other players who have had a similar rating like him. The boy has played a lot of tournaments in India and just loves to keep playing one event after another. Next we will see him in action at the Kolkata International 2018 from 14-22 May. Perhaps, he will achieve his second GM norm there before his twelfth birthday! 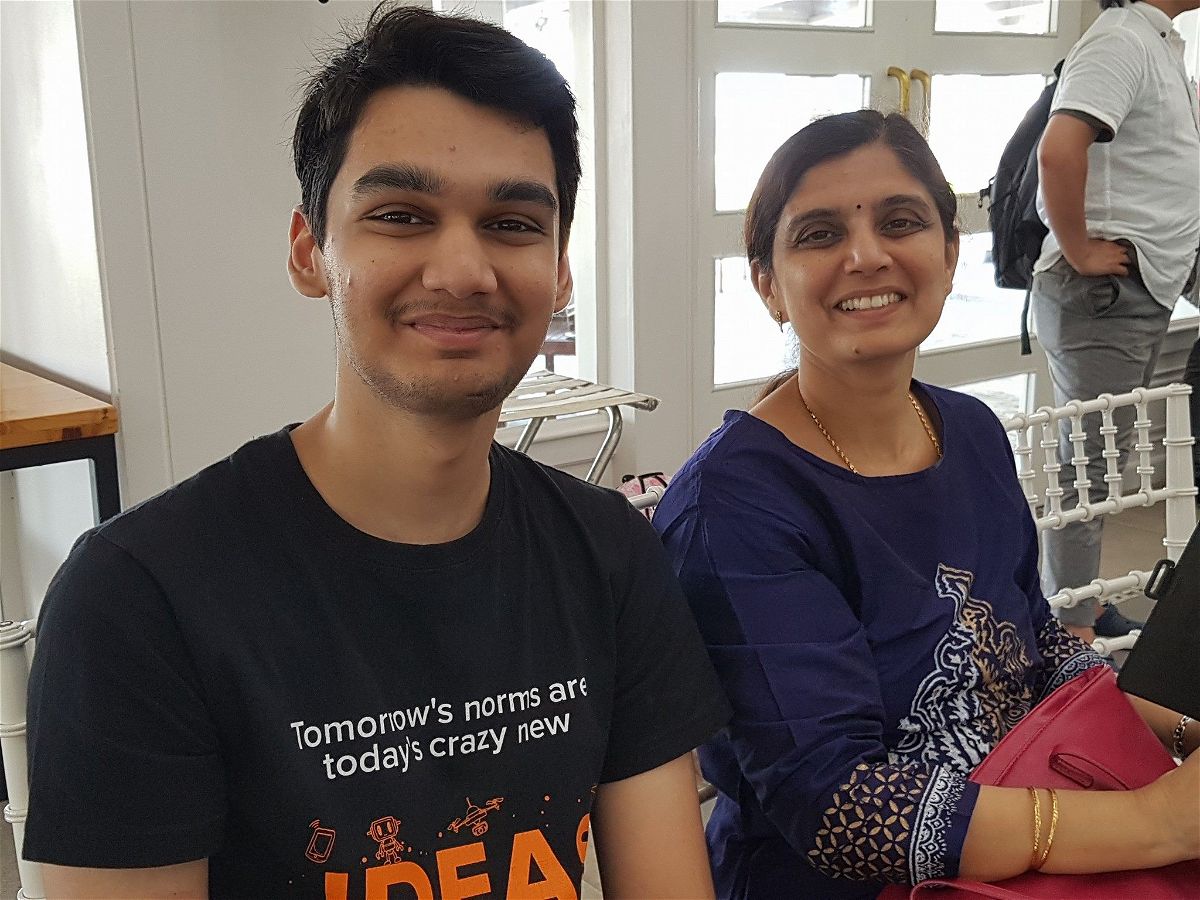 Rithvik Raja has been showing some very strong chess recently. It was not surprising that he achieved his maiden IM norm at the event. | Photo: Peter Long

One of the most exciting games was Rithvik's final round battle against GM Hrant Melkumyan. Rithvik needed a draw to achieve his IM norm and he was worse out of the opening. At one point the Armenian had a beautiful finishing stroke. 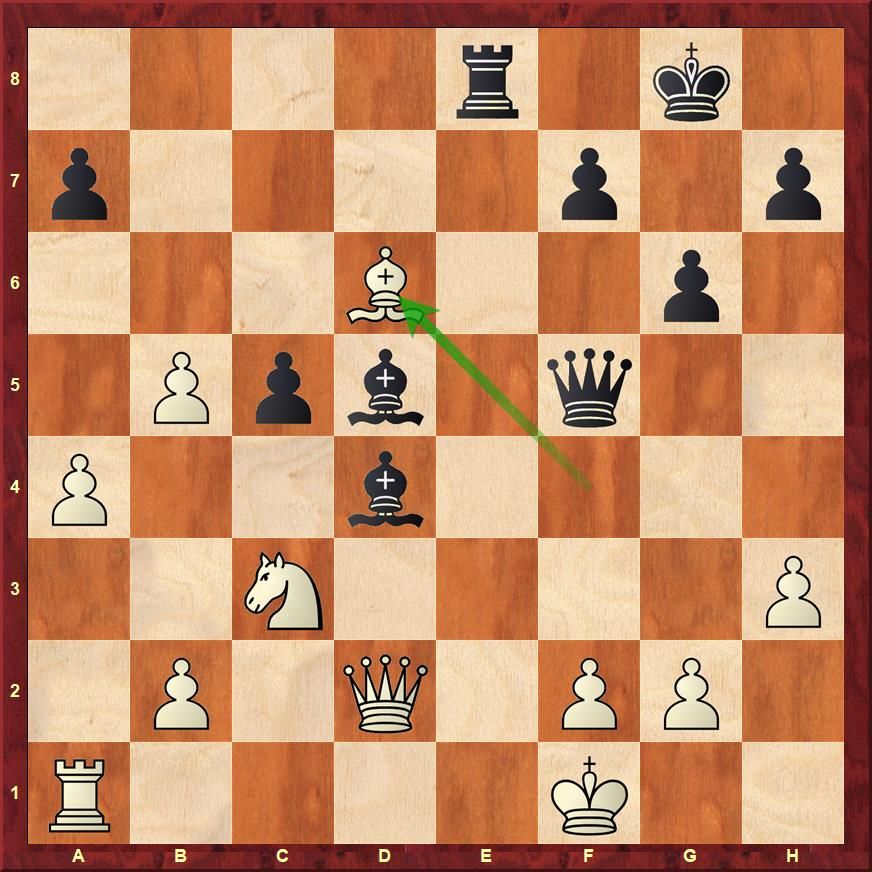 White has just taken the pawn on d6. Can you spot the winning tactic for Black? Think hard! It's quite pretty. (The answer is in the game replayer below)

After Hrant missed this chance, he was worse for the remaining part of the game. In a completely lose position a draw was offered and Rithvik accepted it as it meant his maiden IM norm. Perhaps it would have been wiser to play on and score a win against a 2669 GM. But such moments are sure to crop up more than once in Rithvik's playing career! 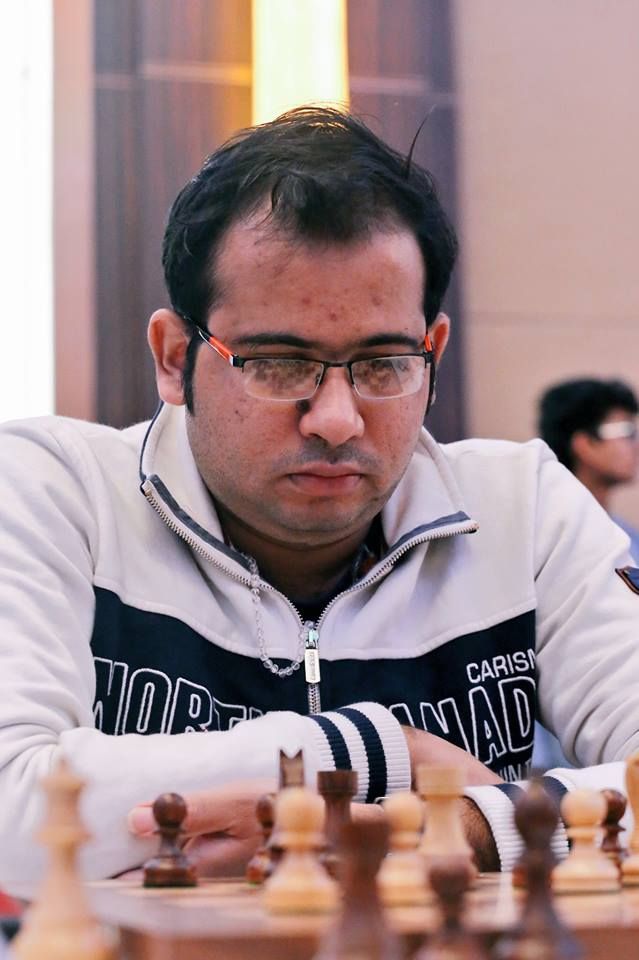 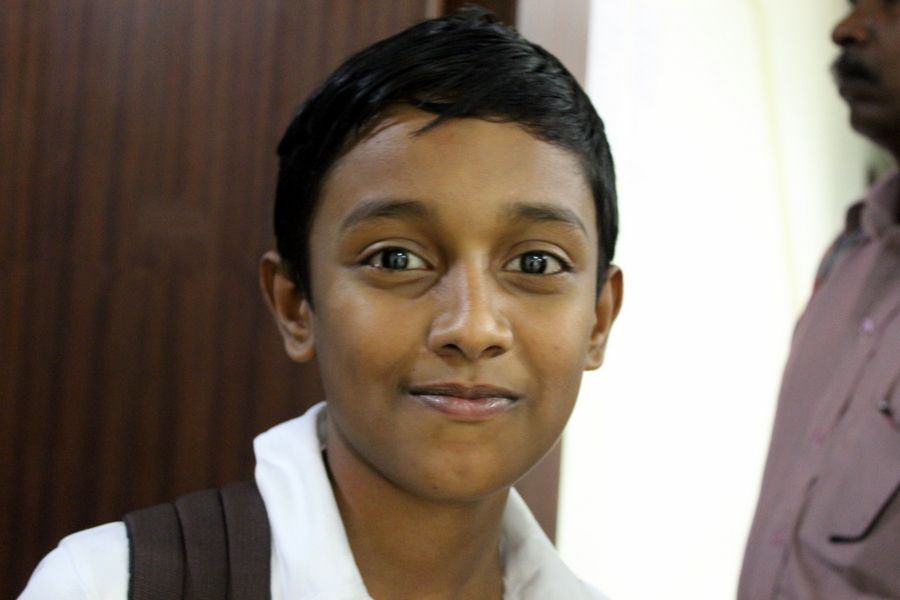 Manish Anto Cristiano surely made a mark at this event. This youngster has always shown promise. He was also the under-11 national champion of India. However, inconsistent play has ensured that his rating is just 1926. In this tournament Manish showed some phenomenal play to gain 185 Elo points! We hope that he now starts playing consistently and keeps growing with time. 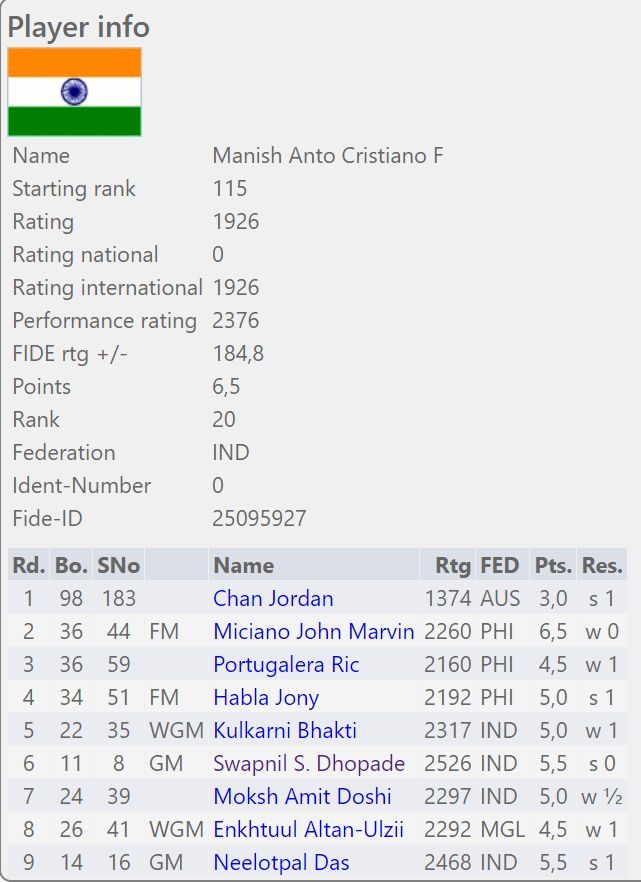 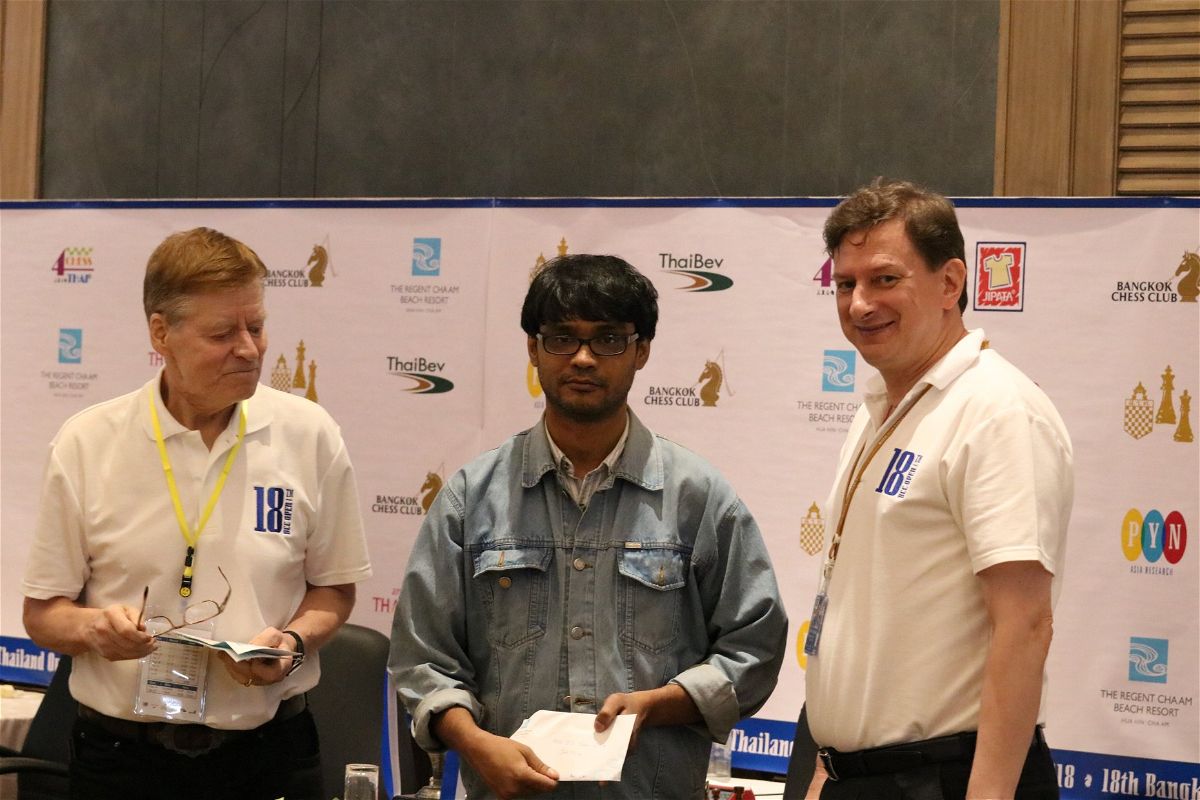 So what is it that will attract you to visit Bangkok in 2019? 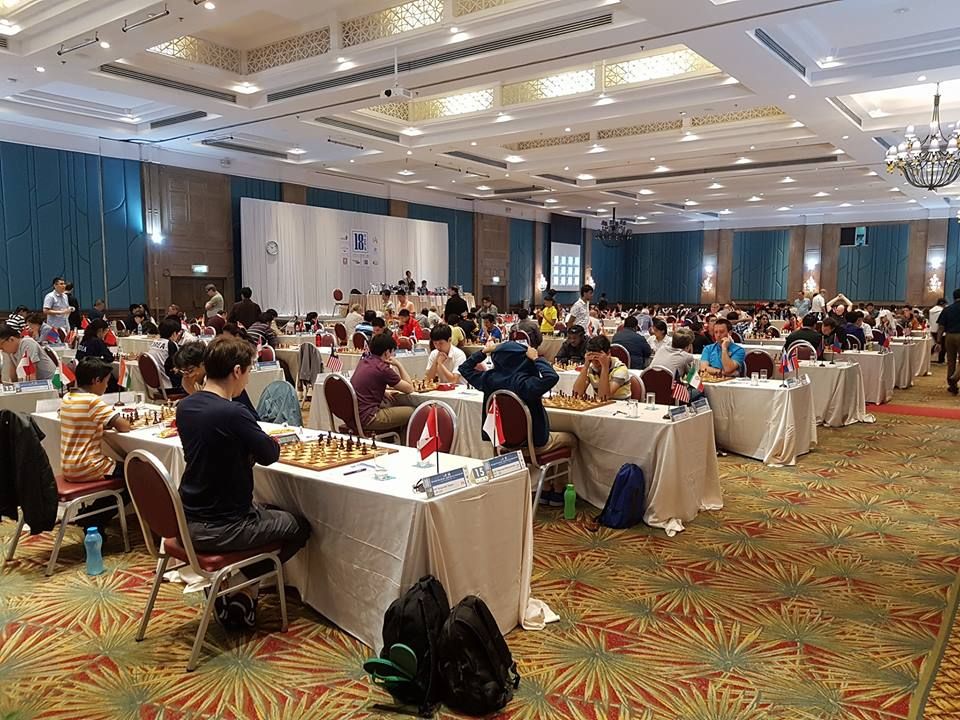 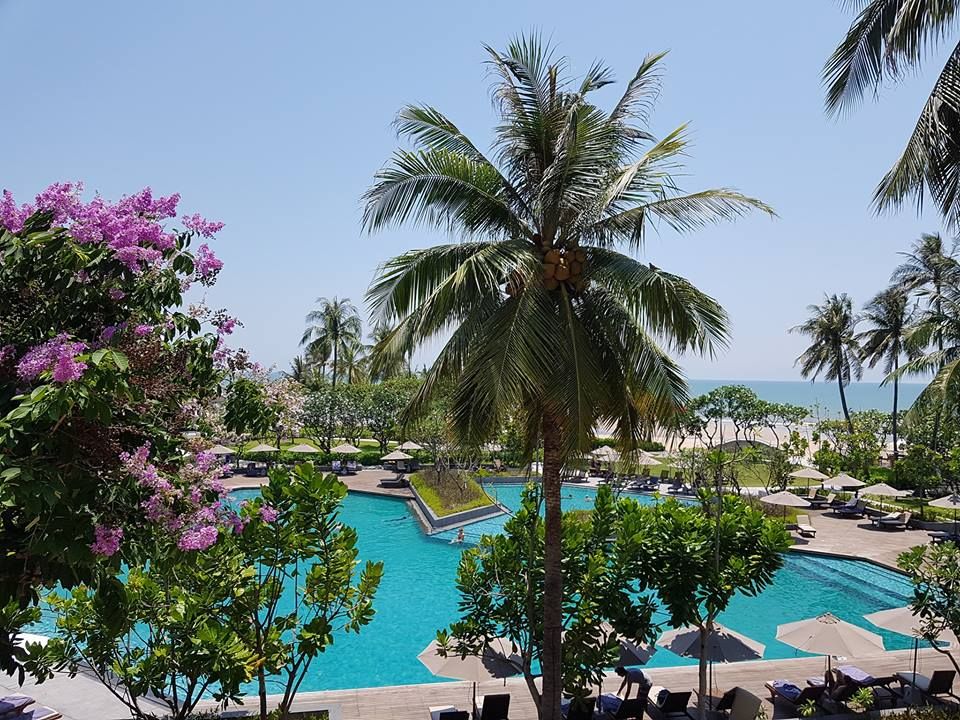 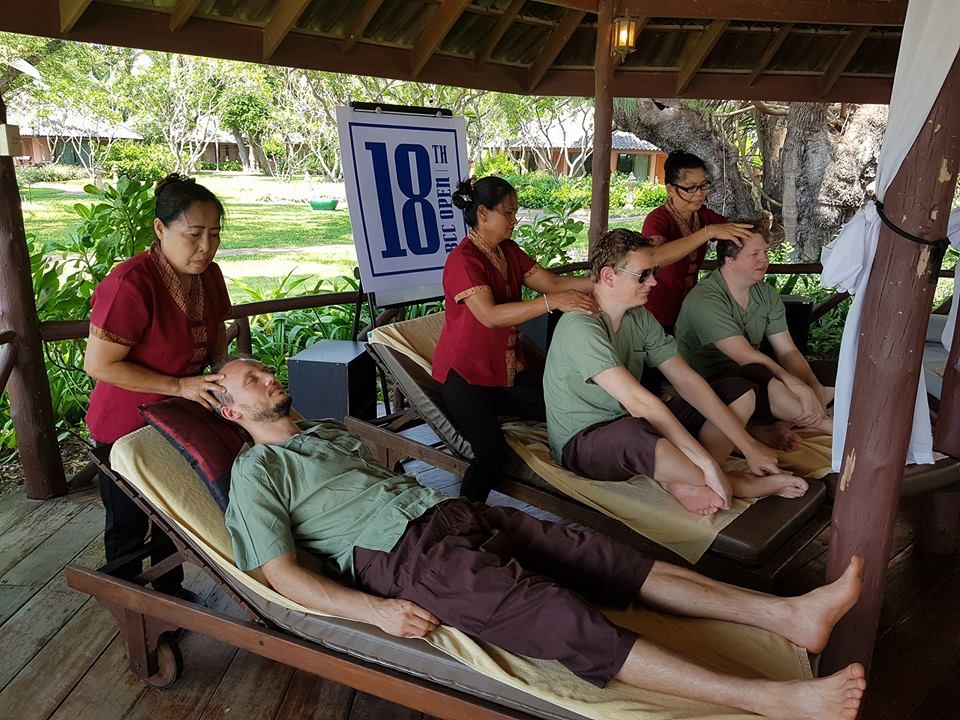 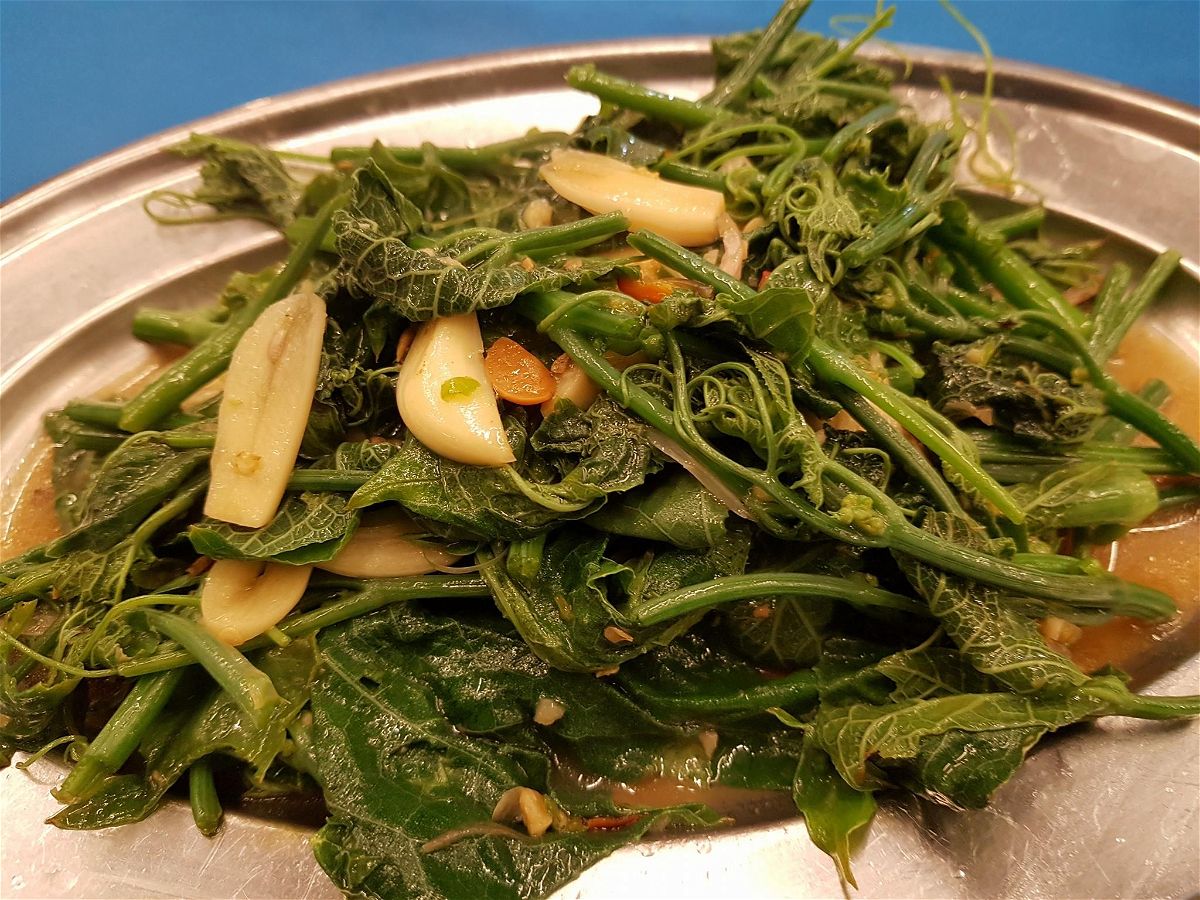 There is something here for everyone! 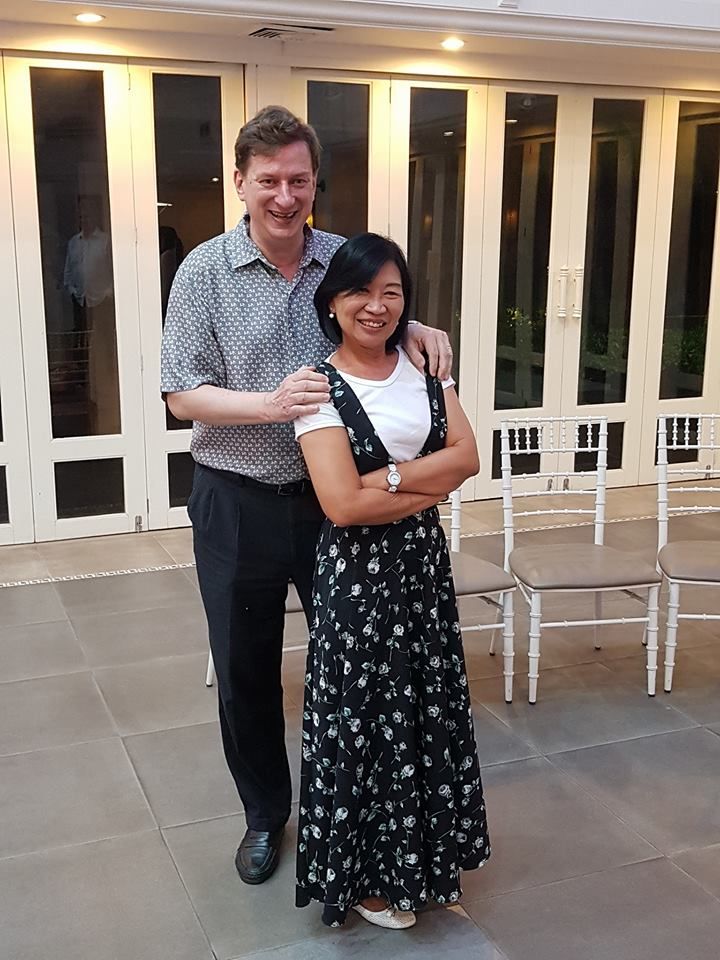 The tournament director Kai Tuorila with his wife. The duo work tirelessly to ensure that the Bangkok Chess Club Open is a continuing tradition. | Photo: Peter Long 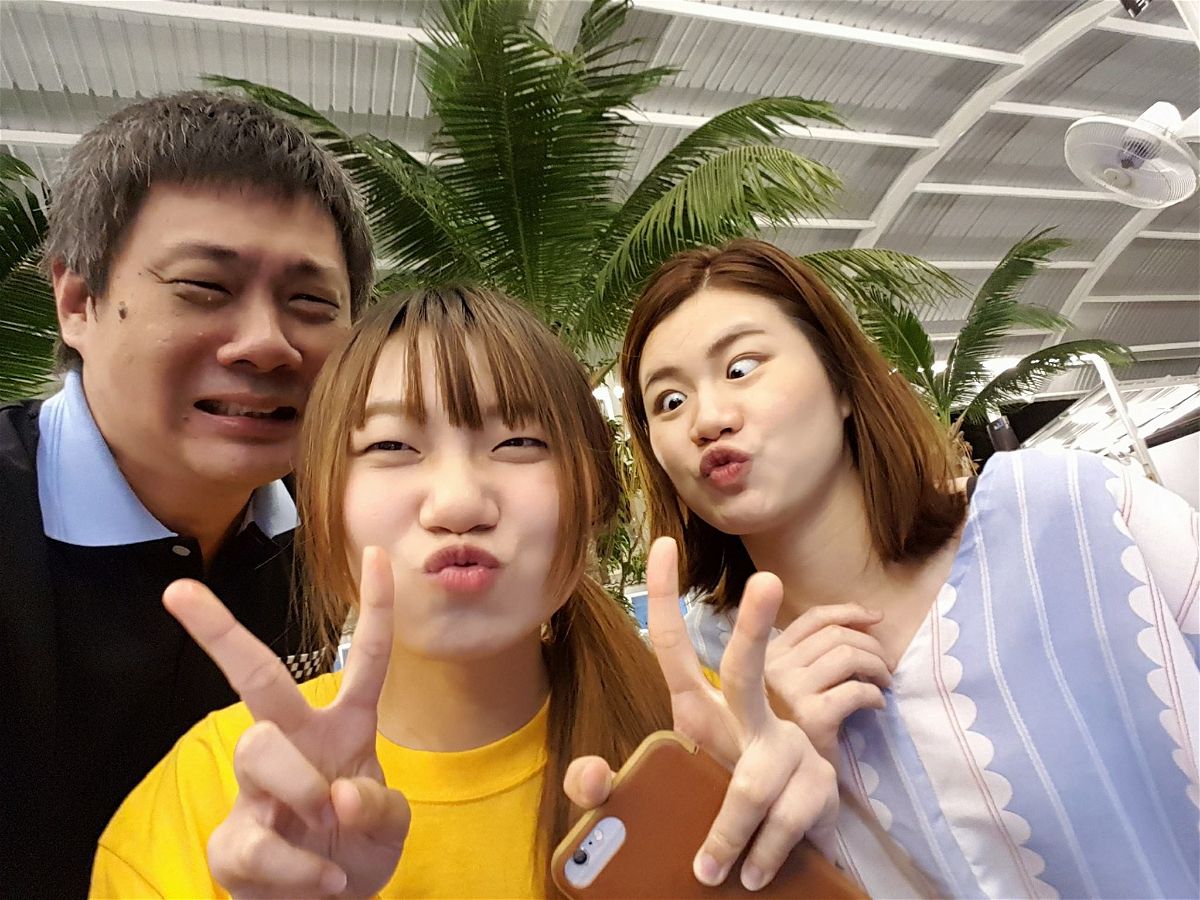