Athens of the East Round 8: Abhijeet Gupta goes down against Pavel Smirnov

The Athens of the East International Open 2019 had five players tied for the lead with 6.0/7 points at the end of the seventh round. However, in round eight one of them, the Russian Grandmaster Pavel Smirnov, dashed ahead of the others to emerge as the sole leader. Pavel defeated Abhijeet Gupta in the eighth round to take a half point lead over the entire field with 7.0/8 points. He is closely followed by a pack of six players on 6.5/8 led by West Bengal's Sayantan Das who maintained his solid form to hold GM Adam Tukhaev to a draw in the latest round. Elsewhere, Venkatesh M.R. drew the Chilean GM Rodrigo Vásquez Schroder, while India's Blitz King Rajaram Laxman suffered defeat in the hands of second seed Boris Savchenko. In this report we bring you photos, games, analyses, and more. 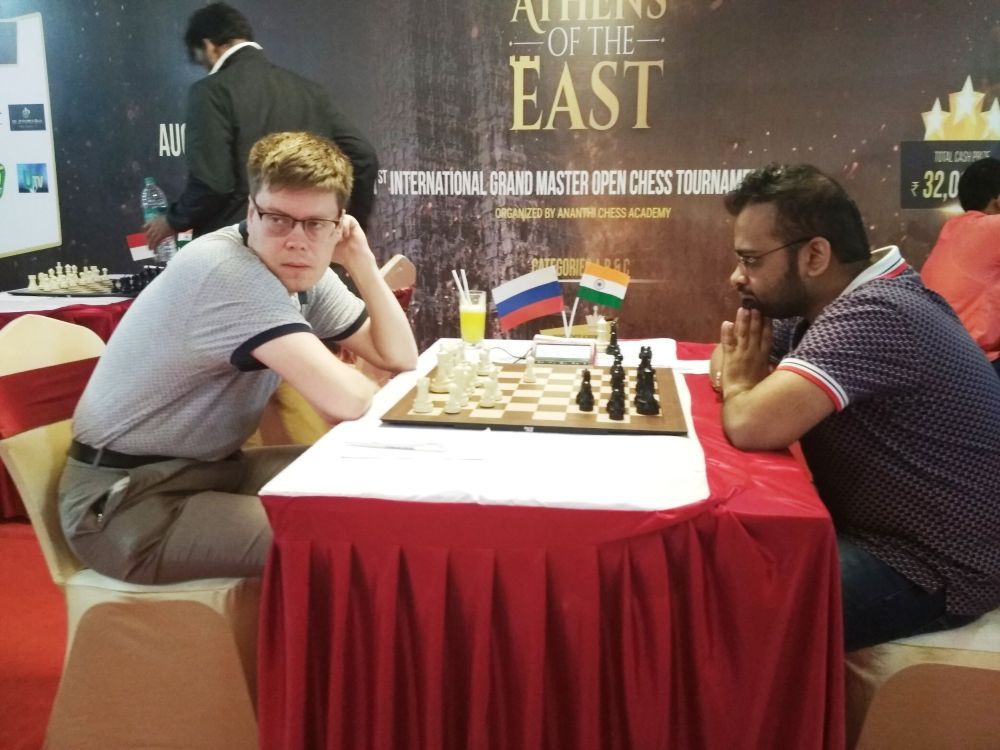 Russia's Pavel Smirnov has so far remained unbeaten in the event, by defeating the top seed Abhijeet Gupta he has now emerged as the sole leader | Photo: IA Rathinam Anantharam

In round eight of the ongoing Athens of the East International Open 2019, the top seed Abhijeet Gupta was pitted against third seed Pavel Smirnov. The game opened with an English and the queens and knights got traded off as early as move 12 to enter into a perfectly even endgamish position. But just as the game seemed dwindling towards a draw, the Russian was able to create small practical chances. The Indian soon found himself in an inferior position after committing slight inaccuracies and failing to coordinate his pieces well. 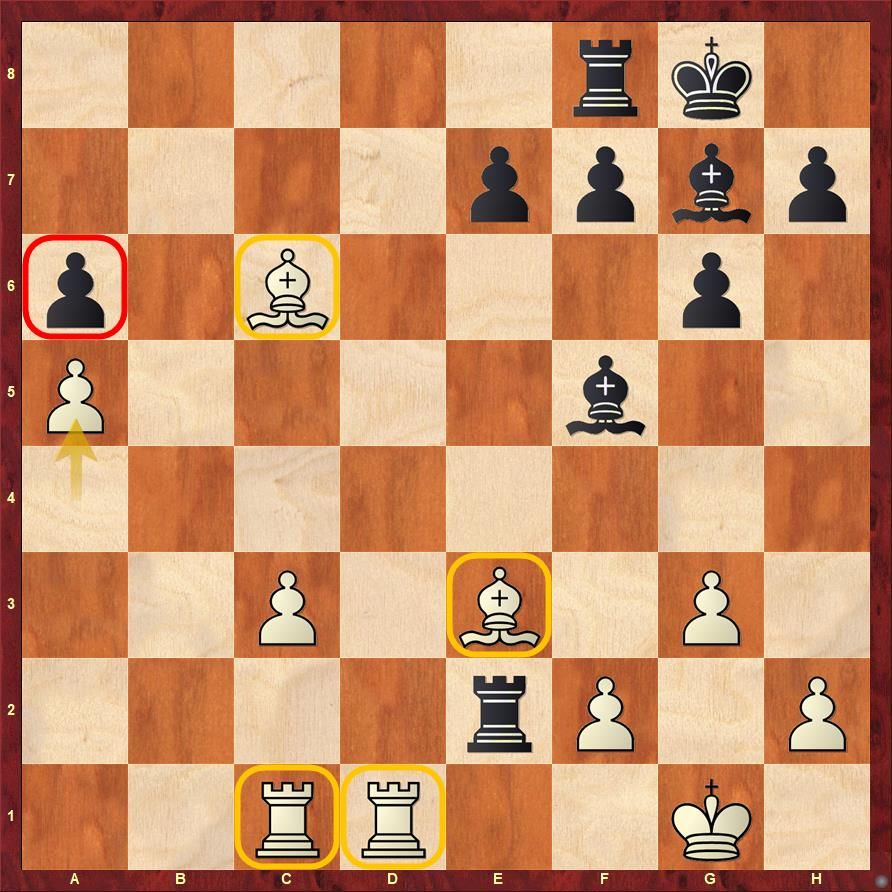 Position after 19.a5: The engine considers this position to be equal but from a human point of view it seems White's pieces are better coordinated, while Black still has some work to do on that front. His rook on e2 particularly seems disconnected and his pawn on a6 is clearly a target which if falls will give White a dangerous passer.

In the above situation 19...Bg4 20.Bb6 Bh6 21.Rb1 Rc2 22.Re1 e6 23.Bb7 Bd2 for instance would have been a good way for Black to create counterplay. In this line even if White has the strong passed a-pawn but advancing it is difficult with Black's bishop pair controlling the whole board. But in the game 19.a5 Be5 20.Bb6 Rc8 21.Bb7 Rxc3 was opted for instead, this wasn't probably the best of judgements. After this White was able to advance his a-pawn and exchange two pairs of rooks and bishops. And of course, this favoured White, as Capablanca had once said, "A passed pawn increases in strength as the number of pieces on the board diminishes". 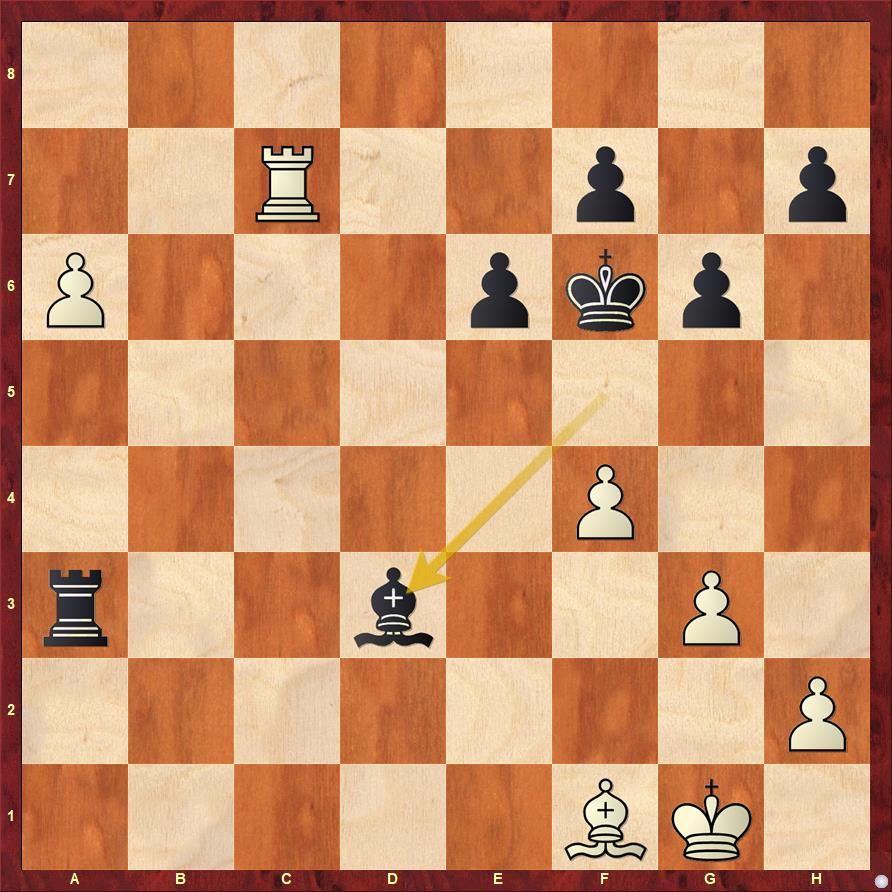 31...Bd3 was perhaps the next most critical mistake, keeping the bishop on board would have given Black better chances to defend. After 32.Bxd3 Rxd3 33.a7 White was clearly winning. 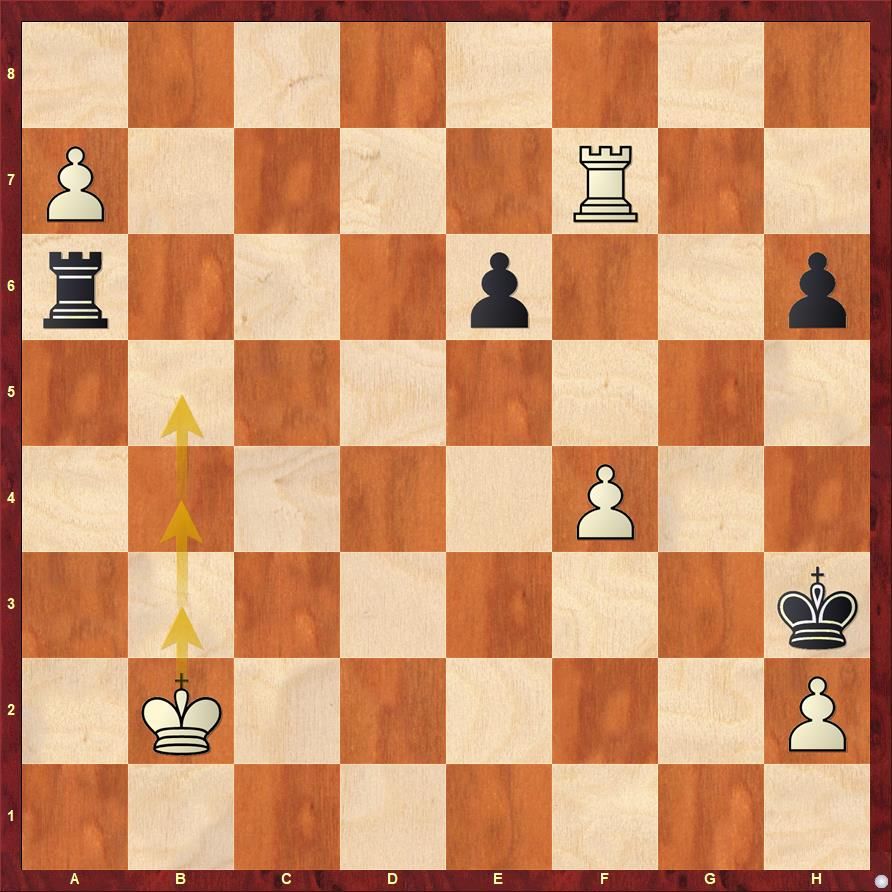 All White has to do in this position is to get his king to b8 after which it is game over for Black. 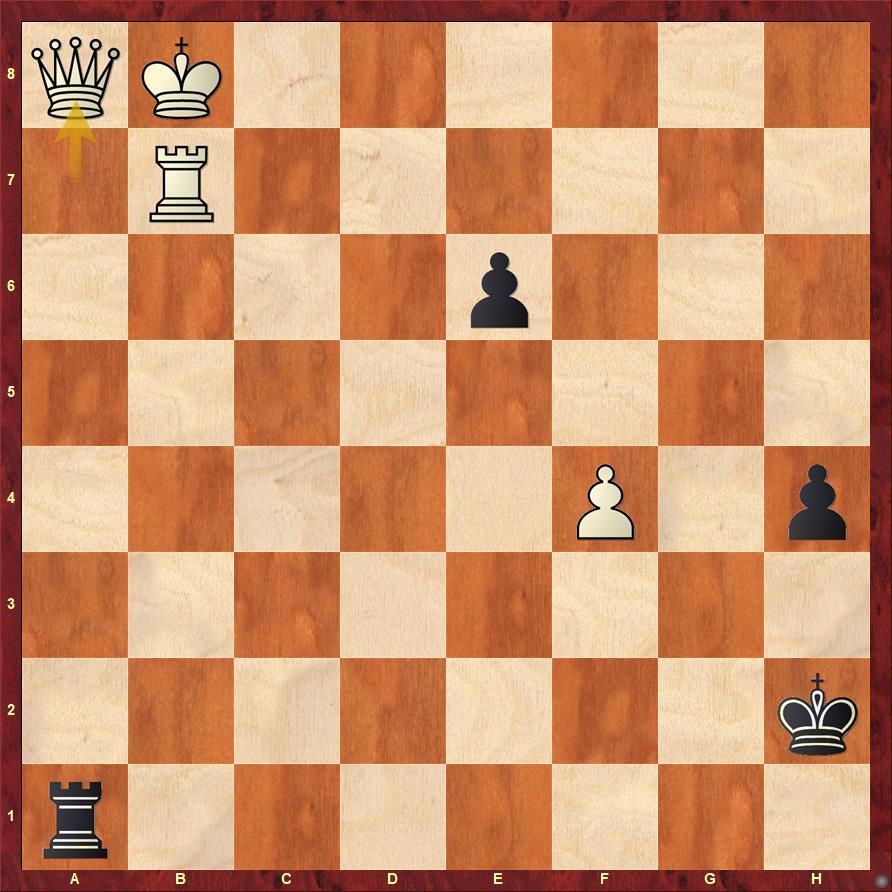 There was no difficulty in executing this standard idea. The a-pawn was queened and Black now had to part with his rook. Resignation came soon after. 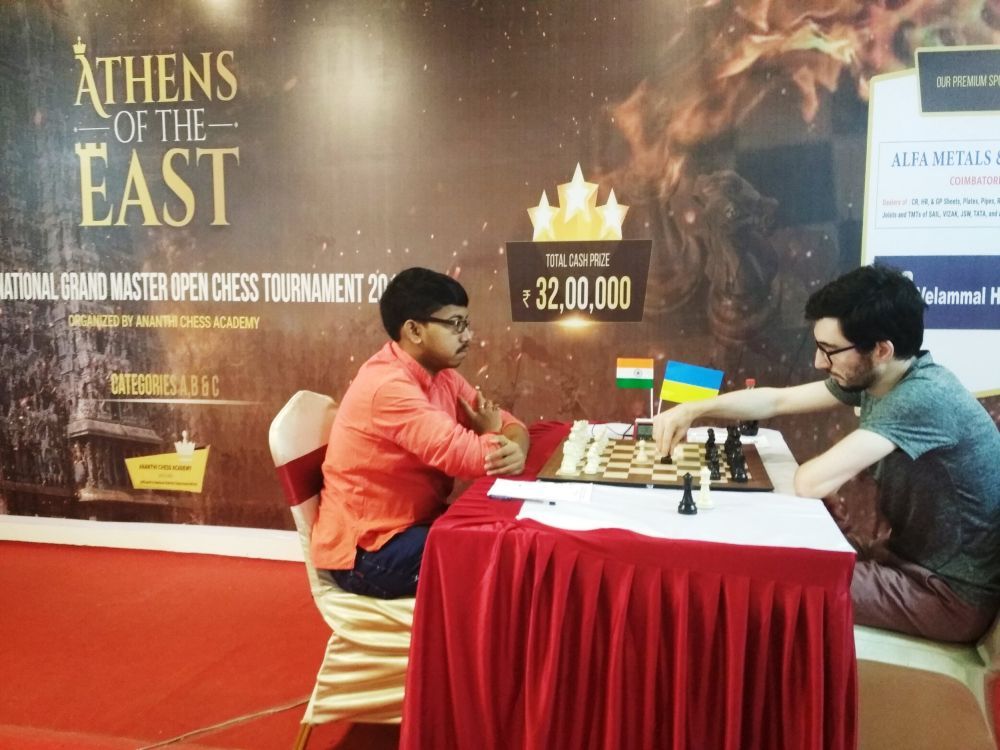 Sayantan Das had some winning chances against Adam Tukhaev with an extra pawn but the Ukrainian GM defended well to force the split of points. | Photo: IA Rathinam Anantharam 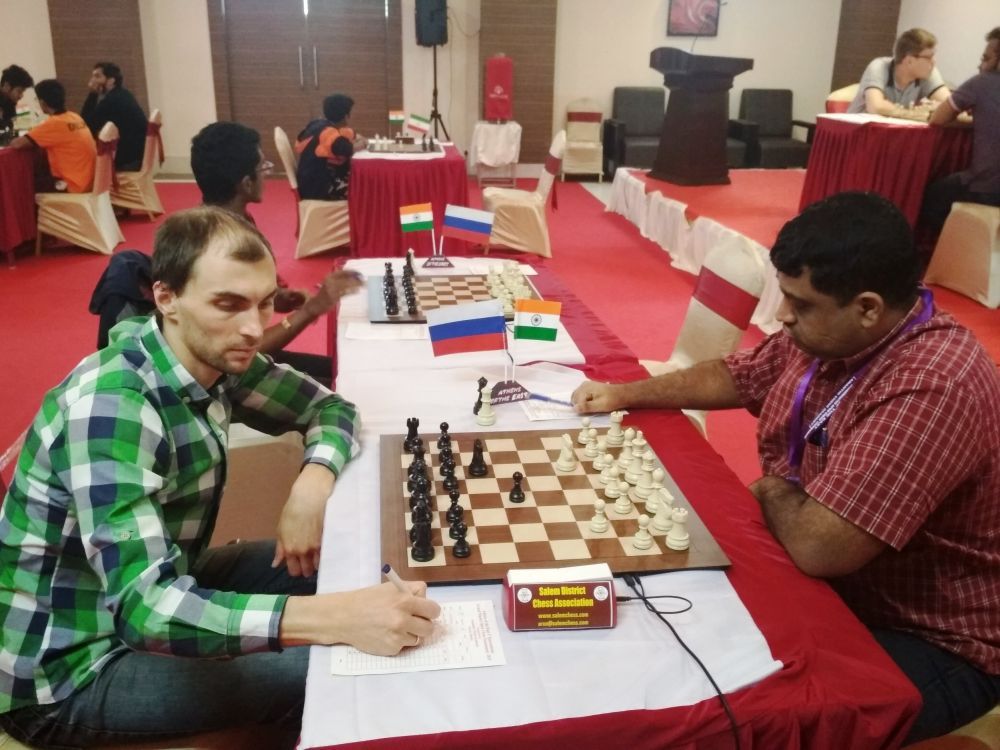 Boris Savchenko beat Rajaram Laxman who opted for the unusual Nimzo-Larsen opening with 1.Nf3 and 2.b3 | Photo: IA Rathinam Anantharam 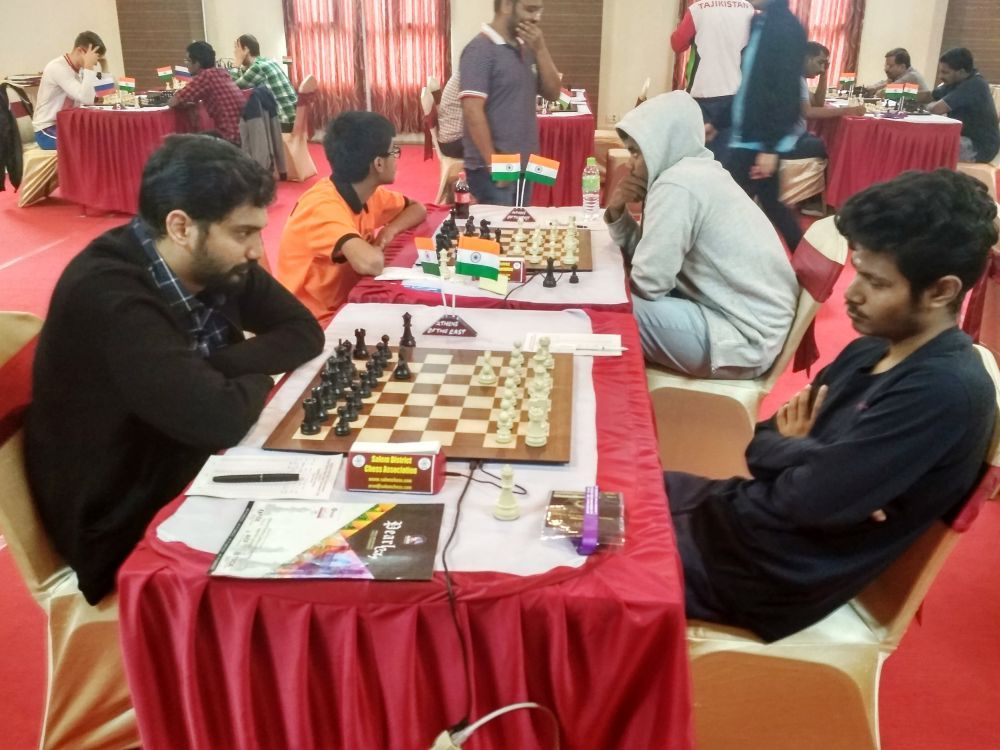 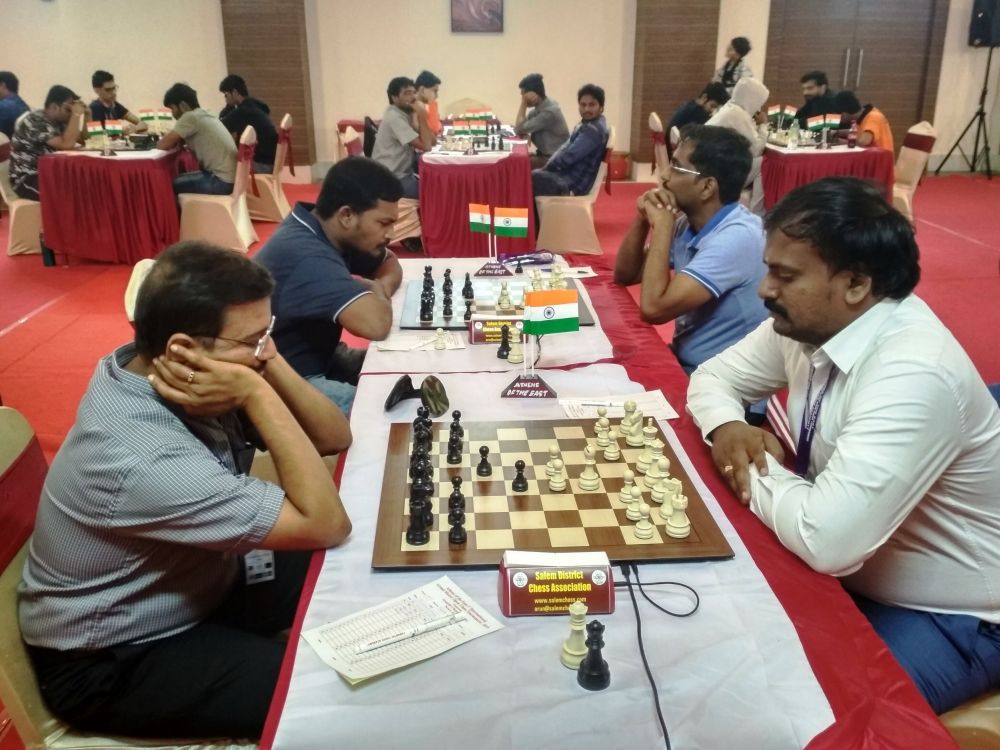 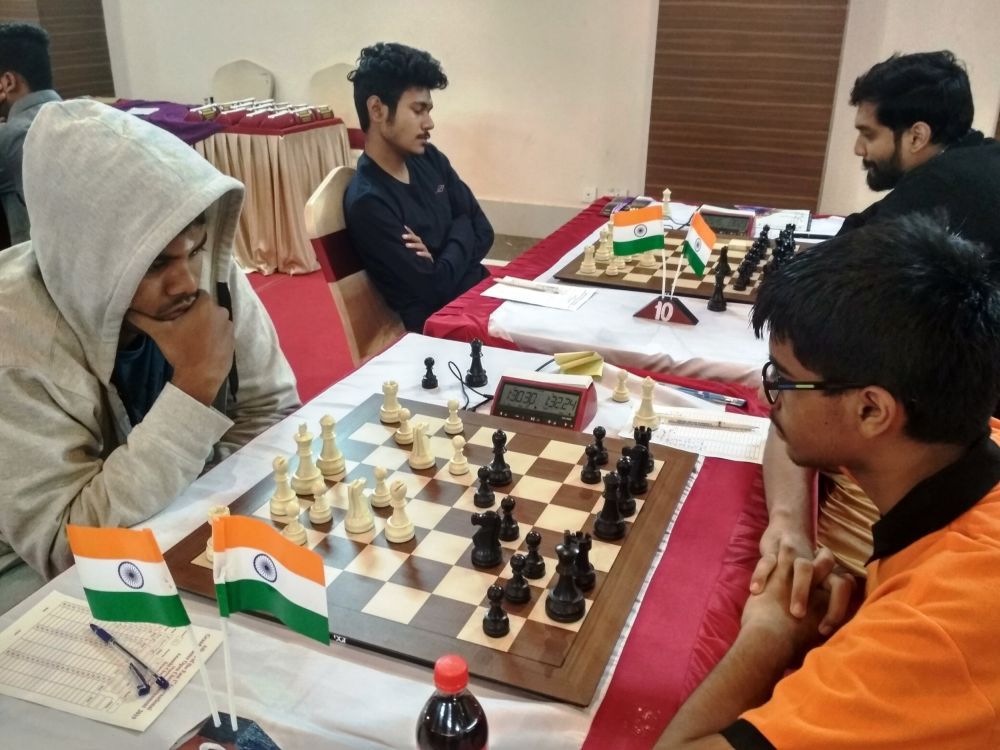 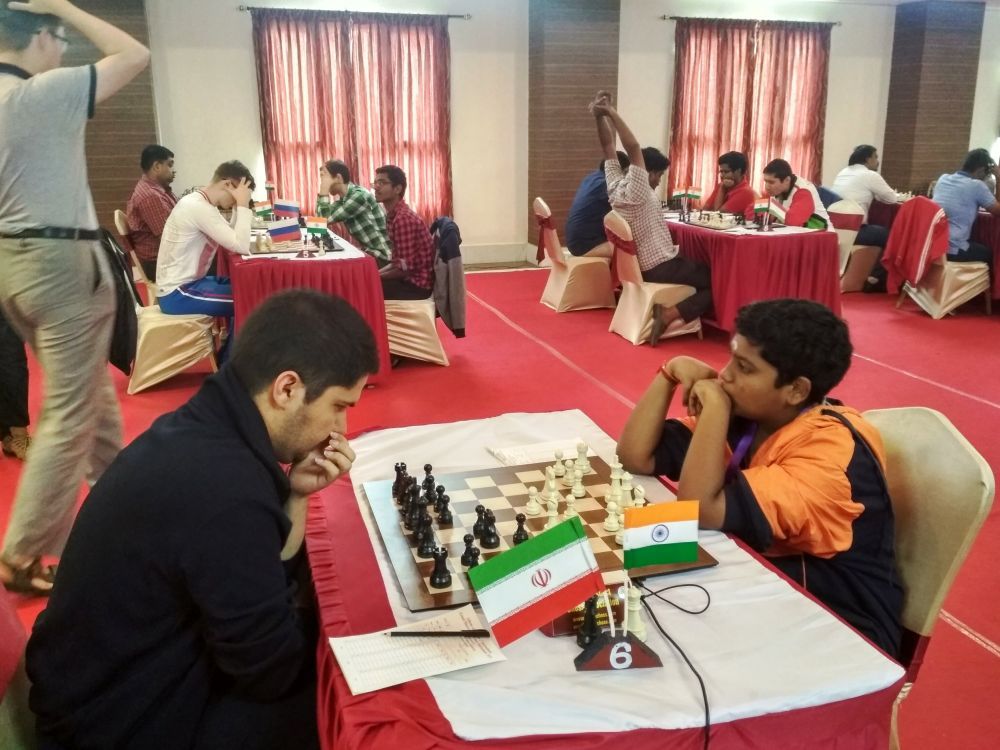 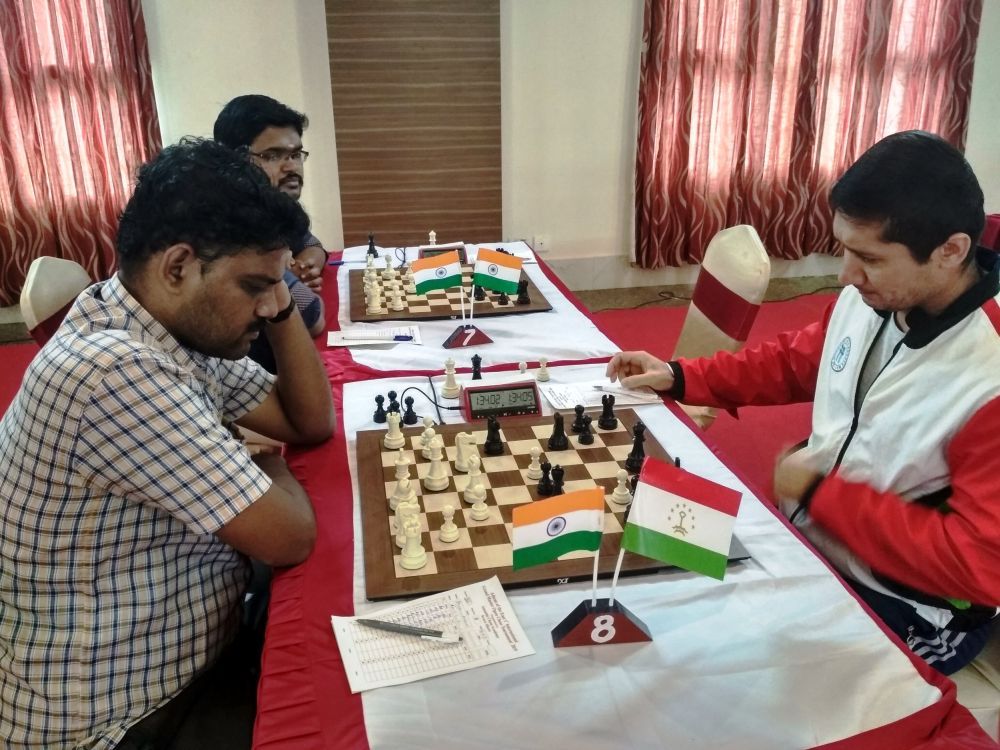