While strong male players are constantly being churned out from the country, women's chess has been a matter of worry for the current administration of AICF. In order to set this problem straight they have decided to seriously invest in bringing world class international players to India and give a chance to the young talents to fight it out against them in Round Robin format. The six Indian girls who have got a chance in the Velammal-AICF WGM Round Robin tournament are Michelle Catherina, Varshini, Divya Deshmukh, Aakanksha Hagawane, Saloni Sapale and Chandreyee Hajra. The international players are Nakhbayeva, Munguuntuul, Osmak, Uuriinuya, Babiy and Franco. Olga Babiy from Ukraine is leading the event with 3.0/3. On her heels is India's future in women's chess WIM Divya Deshmukh. An illustrated report with pictures from Chennai by Niklesh Jain.

Staying true to their aim of powering women's chess in the country, the AICF has organized the Velammal - AICF International Women GM Round Robin Tournament 2019. This is the third such event that the national chess federation has organized in a year now, the first one being in Mumbai in June, the second one in Hyderabad in August and now this one in Chennai. The idea is to give six of our talented young WIMs a chance to fight it out against International IMs and WGMs and try to score their WGM or IM norms. The title sponsors of the event are Velammal institute.

One could say that there are six Indian players and six international, but at the same time the penultimate seed in the event is Angela Franco. Although from Colombia, she is now married to ChessBase India Hindi's editor-in-chief Niklesh Jain and lives in Katni, Madhya Pradesh. So can we say seven Indians and five international players?! 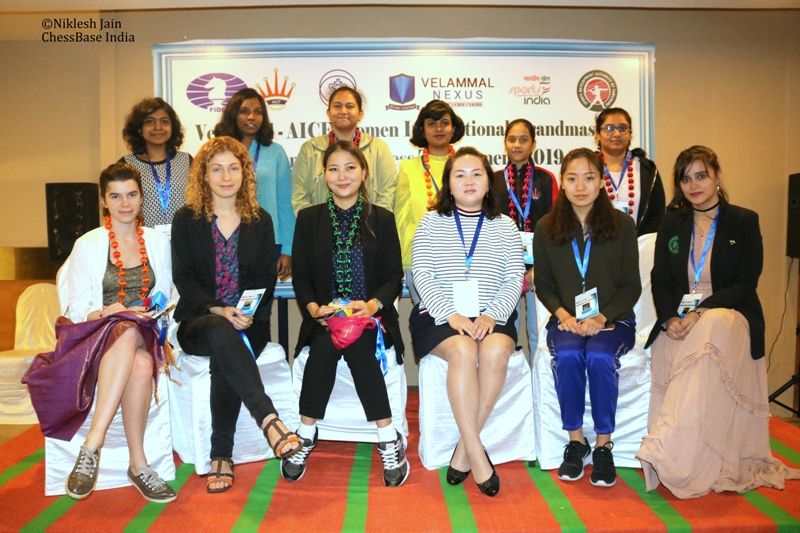 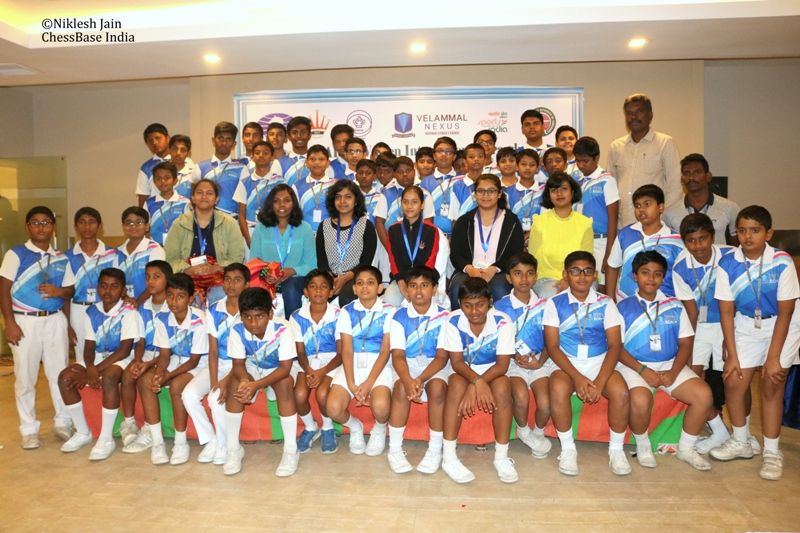 It's nice to see so much excitement among the youngsters of Chennai for this unique event | Photo: Niklesh Jain 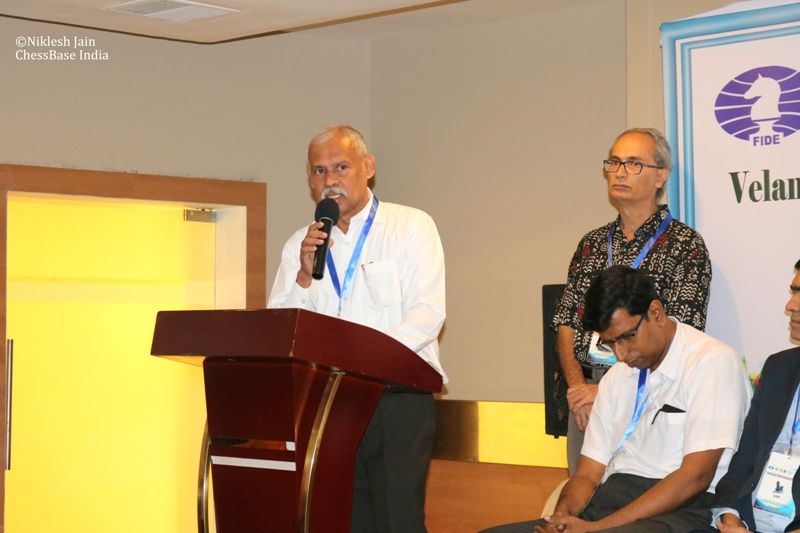 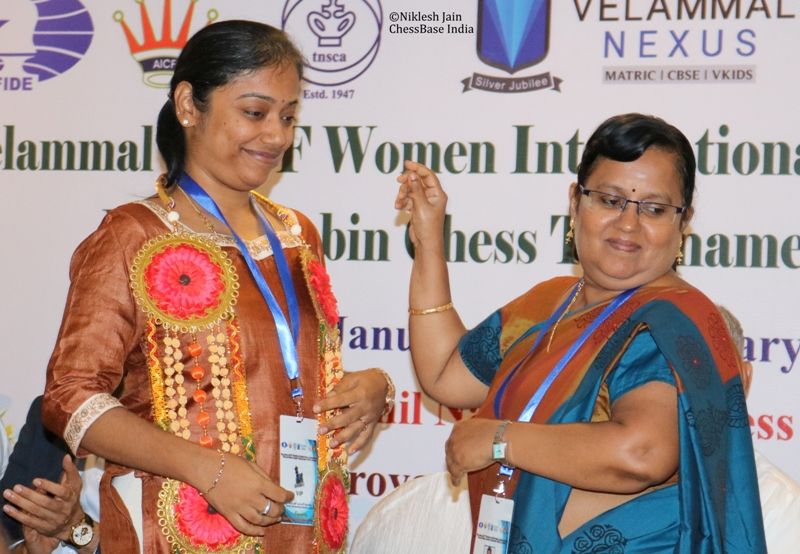 WGM Aarthie Ramaswamy, the former World Youth Champion and one of India's finest chess players in the past, was a guest at the opening ceremony. She is welcomed by the chief arbiter of the tournament Bhuvana Sai | Photo: Niklesh Jain 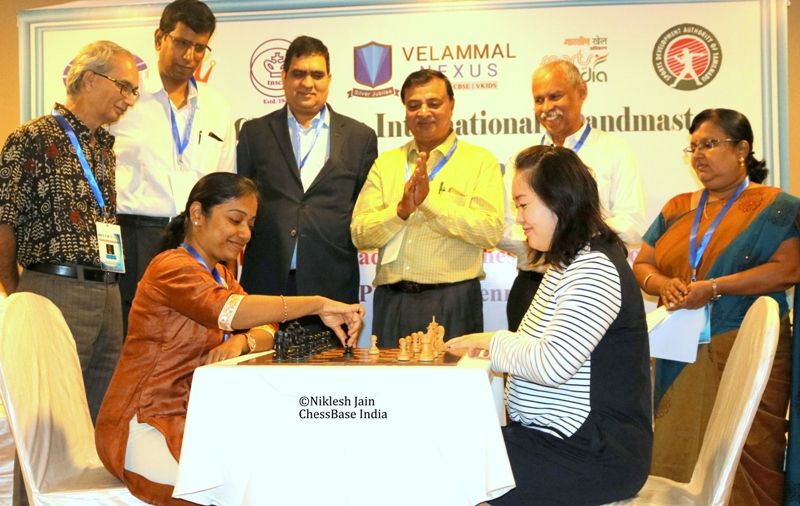 The tournament is opened by Aarthie and the top seed of the tournament Batkhuyag Munguntuul. Sicilian it is! | Photo: Niklesh Jain The International players are all felicitated and welcomed with shawls and garlands! | Photo: Niklesh Jain

Indians surely do know how to welcome their guests! | Photo: Niklesh Jain

Three rounds have been played at the event. 28th of January was the first round and there were two rounds on 29th. That's how things look after three rounds:

Ranking crosstable after Round 3

Olga Babiy has started off with three wins out of three games by beating V. Varshini, Angela Franco and Guliskhan Nakhbayeva. 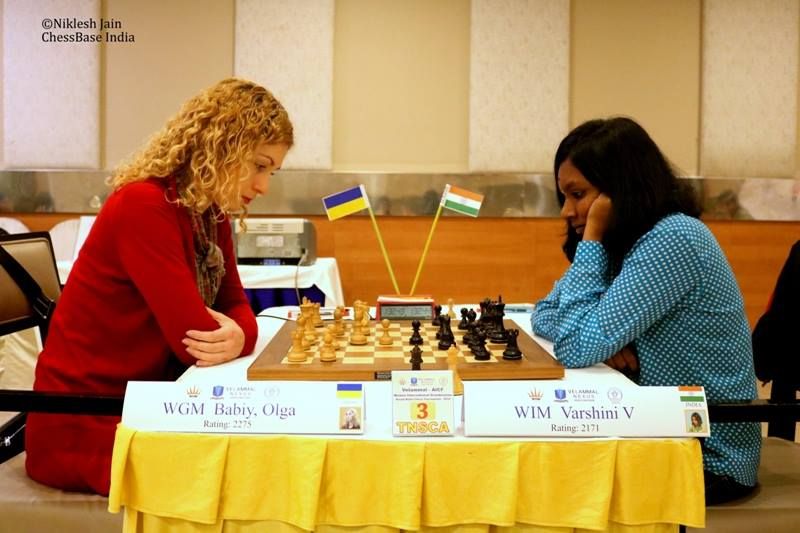 Varshini got a completely minus position in the Sicilian Najdorf against Olga Babiy in just a few moves | Photo: Niklesh Jain

Babiy vs Varshini, Round 1 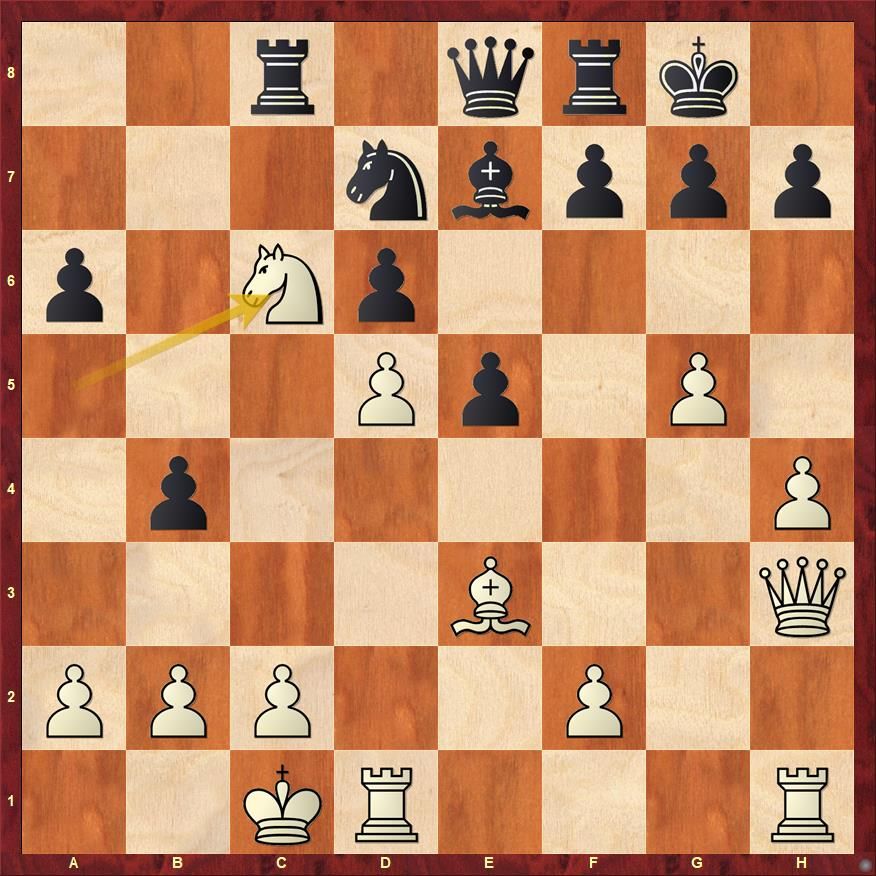 It started as the Najdorf and within 15 moves White has a completely dominating position. How did this happen? Let's find out: 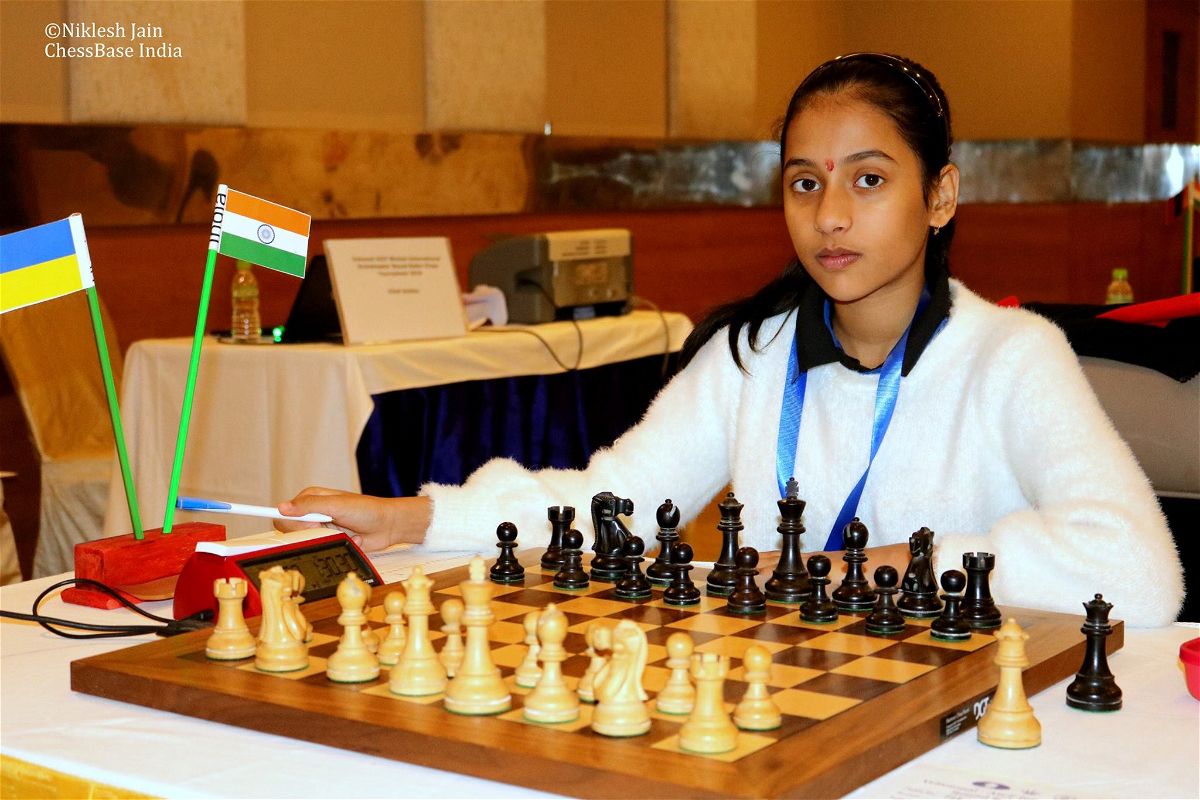 The youngest participant in the event, Divya Deshmukh is on 2.5/3 | Photo: Niklesh Jain 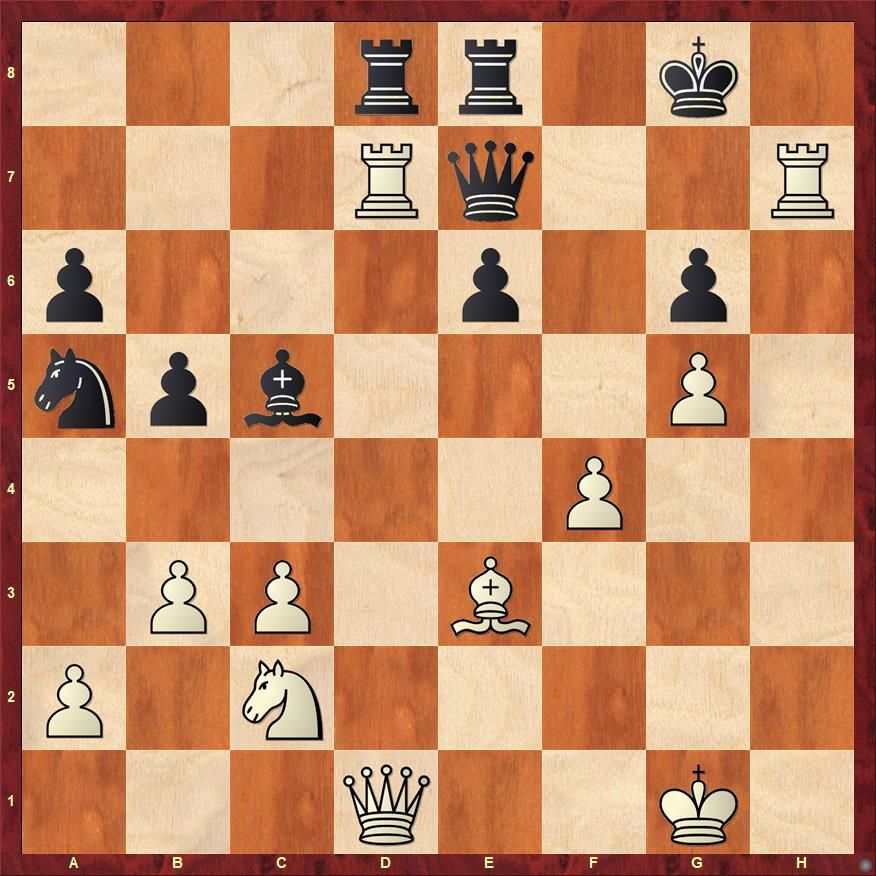 White's last move in this position was Rh3xh7?!! Divya didn't really understand what was going on! She picked up the d7 rook, and then the h7 rook with the queen! A free rook.

But Divya also showcased some high quality chess in round three when she got the better of Saloni Sapale in nice positional style.

Divya vs Saloni, Round 3 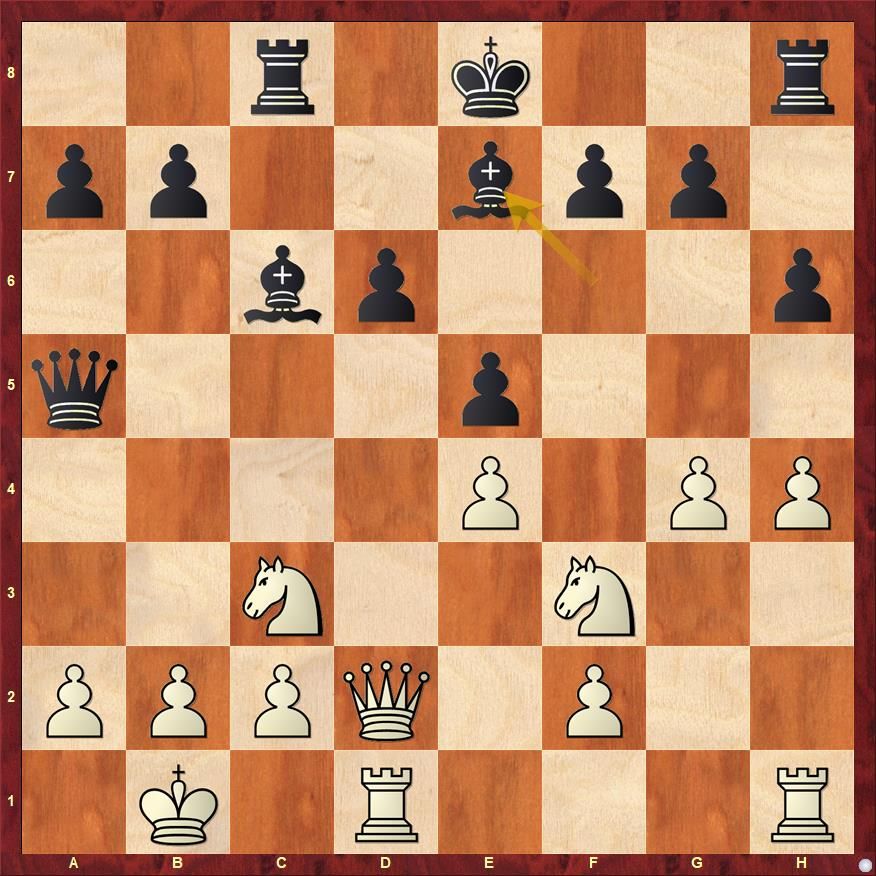 How should White continue in this position?

It was clear to Divya that her knight on f3 was not well placed and needed to be rerouted. She played Ne1! which was a fine move. The knight will come to e3 via g2 and this led to a clearly better position for Divya. 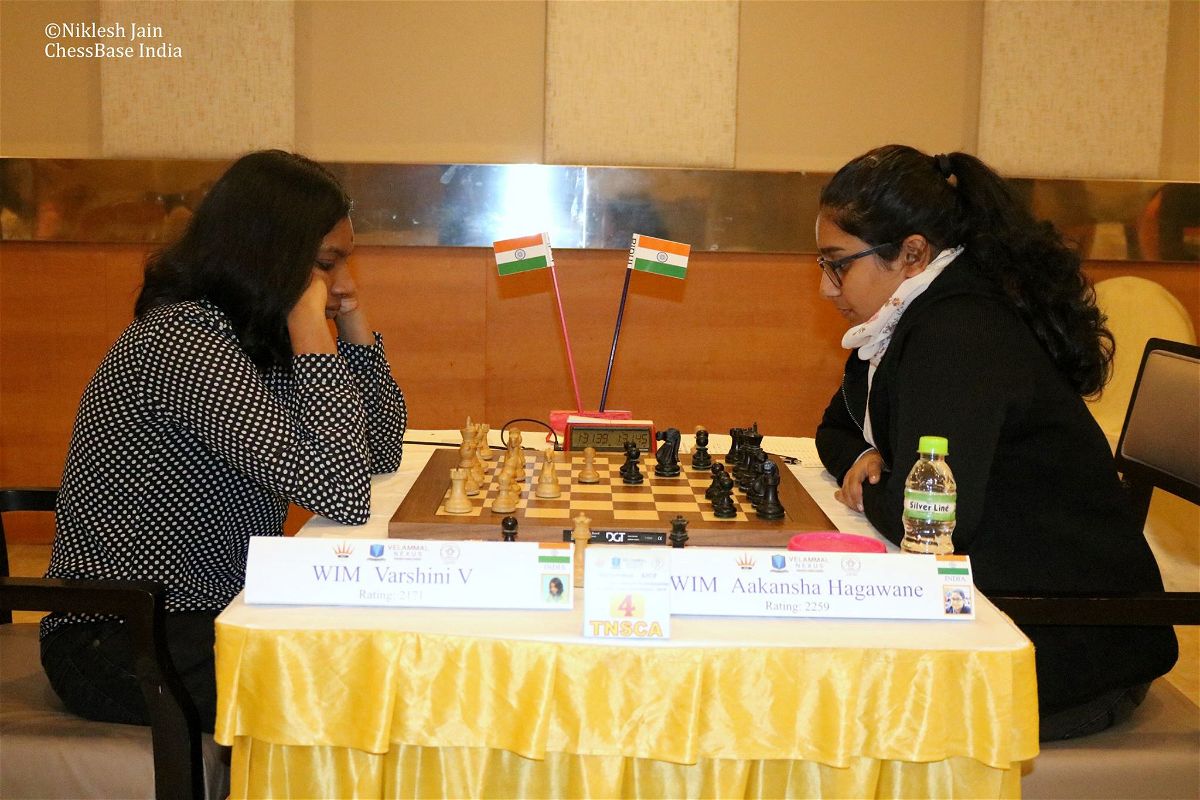 Perhaps the most interesting game from the point of view of unusual moves has been Varshini against Aakanksha | Photo: Niklesh Jain

Varshini vs Aakanksha, round 2 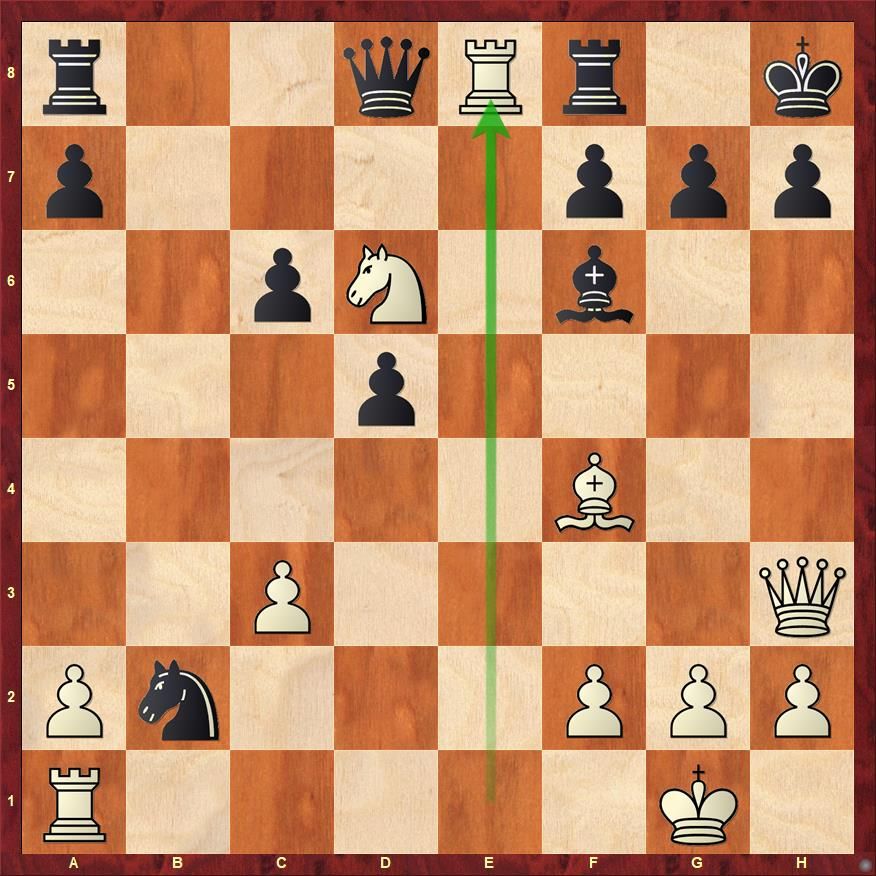 The rook enters the position with Re8! Usually such blows are finishing moves, but Aakanksha kept her cool and found Qc7! Varshini didn't relent and played her knight to c8, which forced Black to sacrifice her queen with Rxe8. The position was around even, but then Black got a great chance... 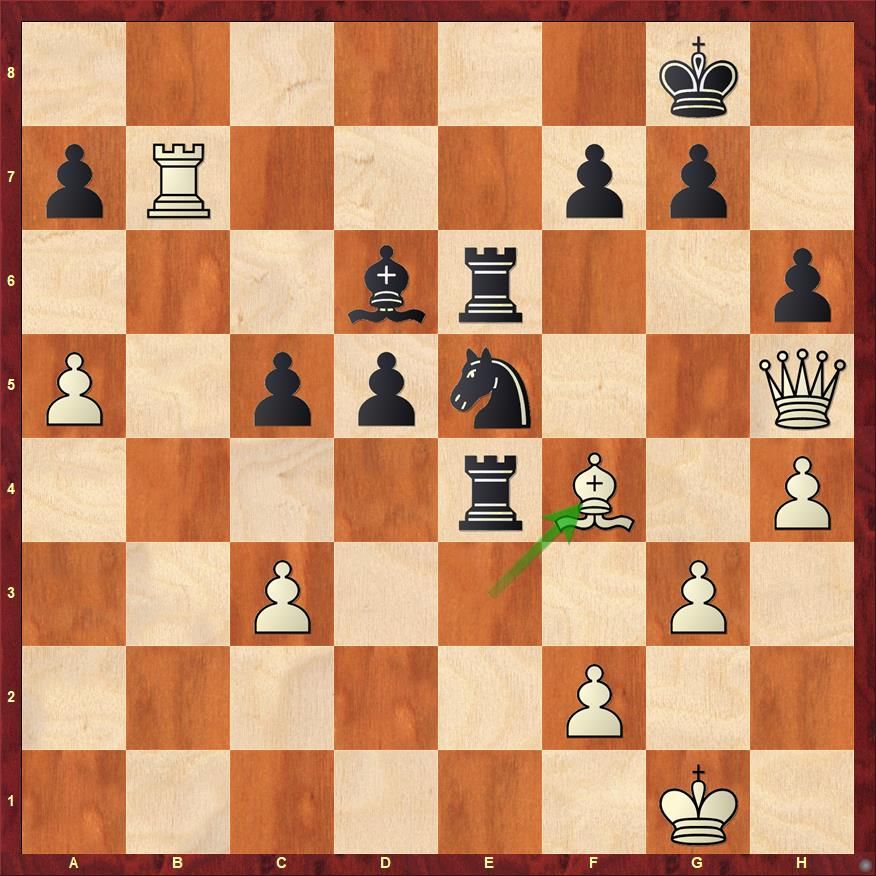 It was a disappointing defeat for Aakanksha. Full credit to Varshini for playing exciting chess! Check out what Hagawane had missed:

The biggest blunder of the tournament was played by Chandreyee Hajra in her second round encounter against Munguntuul: 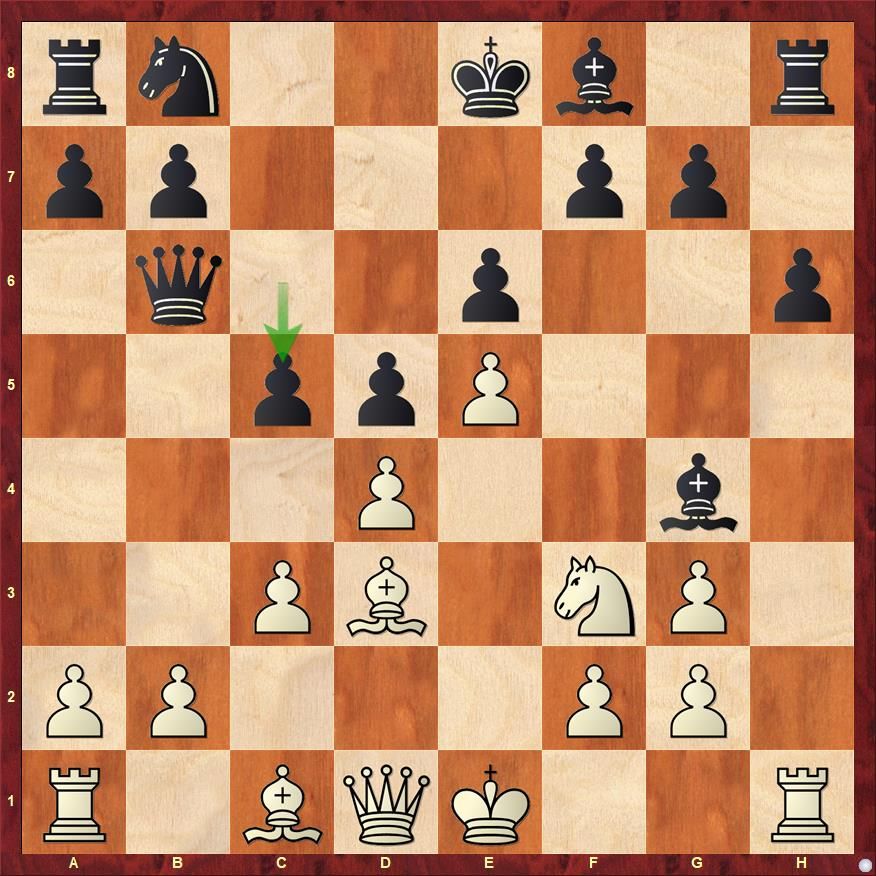 Hajra has just played her pawn to c5. What did she miss? 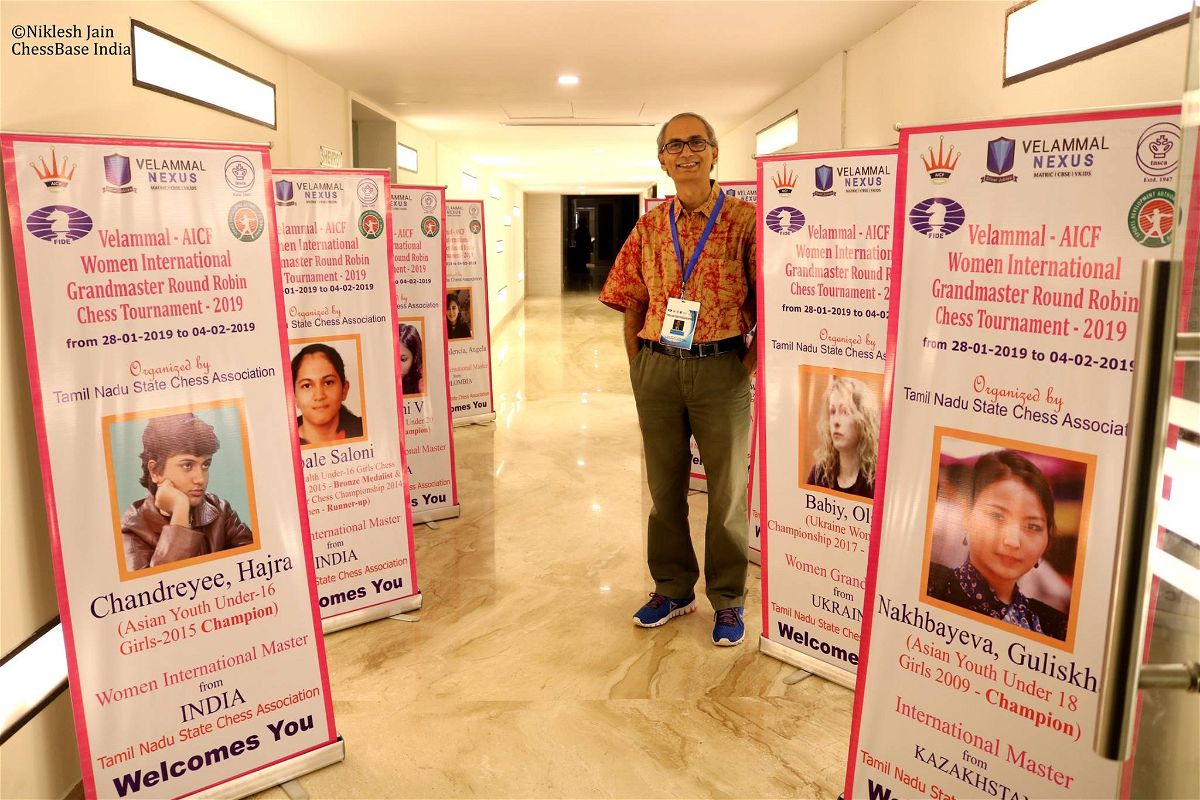 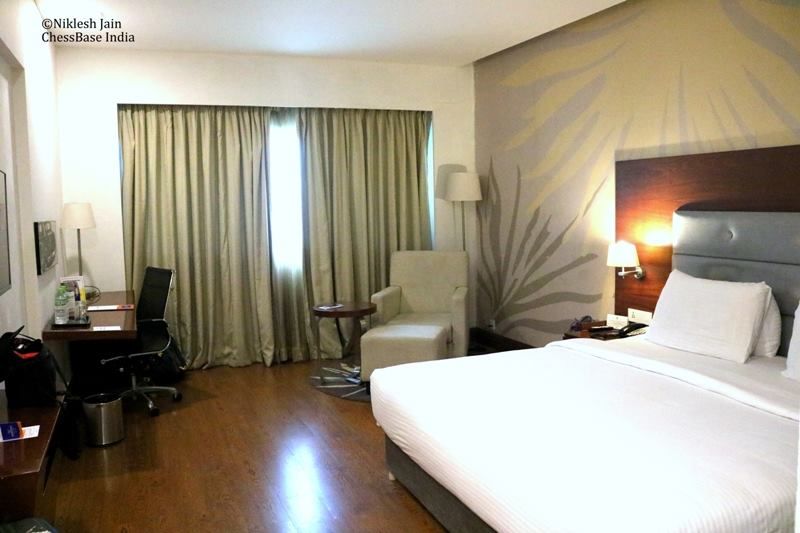 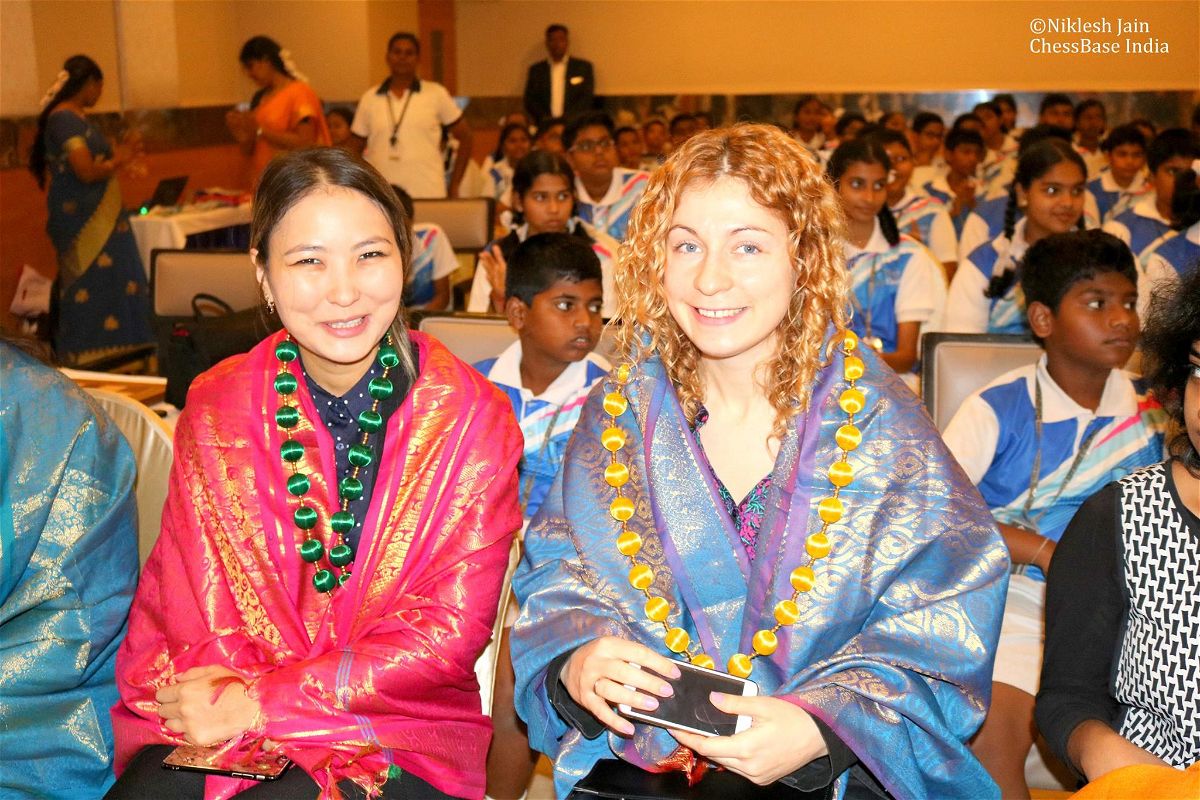 Will someone be able to stop Olga Babiy? (right) | Photo: Niklesh Jain

One has to commend the work done by AICF here. They are giving an opportunity to the young talents of Indian chess to fight against experienced and strong international women players. Yes, there are games with mistakes and errors. But with this experience you can be sure that they will improve and move forward. Take the example of Rakshitta Ravi. She scored just 0.5/11 in the first AICF women's Round Robin tournament held in Mumbai. It was a painful event for her. But she learnt her lessons and within six months she was already a WIM!