Will Karjakin be the 17th World Champion?

In a few hours from now we will have the rapid and blitz tiebreaks of the World Championship Match 2016. Sergey Karjakin has proved to be a worthy Challenger. Will he go the distance today and become the 17th undisputed World Champion? This article covering the journey of both Karjakin and Carlsen was written by IM Sagar Shah and first published on Firstpost online news portal. Read on and get in the groove for the grand finale.

The entire spectator’s zone erupted as Sergey Karjakin moved his rook from d7 to d8. His opponent Fabiano Caruana, seeing no way to avert a mate, stretched out his hand in resignation. This victory not only helped Karjakin to win the Moscow Candidates tournament in March 2016, but also made him the Challenger for the World Championship Match against Magnus Carlsen. It was a stellar performance by the Russian as he finished ahead of great players like Vishy Anand, Levon Aronian, Veselin Topalov, Fabiano Caruana and others. 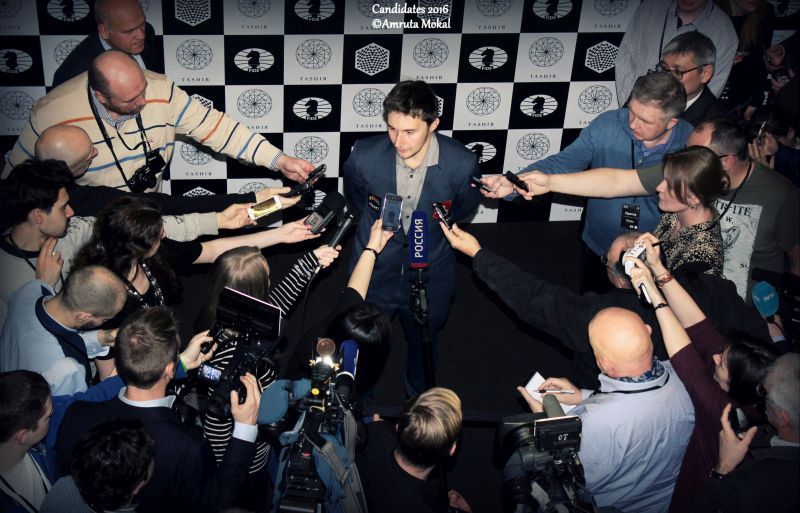 Media and journalists swarm all over Sergey Karjakin, as the 26-year-old Russian wins the Candidates tournament in Moscow 2016 (Picture by Amruta Mokal) 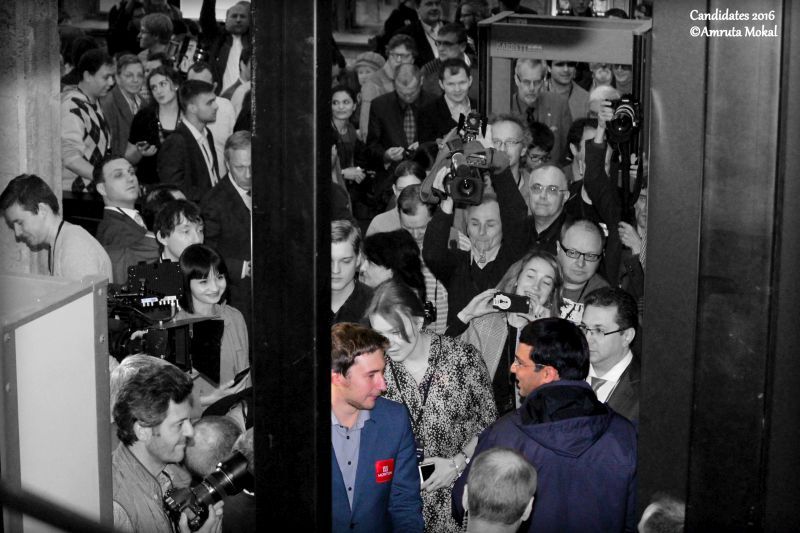 “I hand over the baton to you.” After losing in the World Championships in 2013 and 2014 against Magnus Carlsen, this would be the first time in eight years that Vishy Anand would not be fighting for the world title. (Picture by Amruta Mokal)

Sergey Karjakin was, perhaps, the most prodigious talent that the game of chess has ever seen. He became the youngest grandmaster in the world at the age of 12 years and 212 days in 2002. Young Sergey was ambitious and had the aim to become a World Champion by the age of 16 years. He had to wait for ten years before he got the opportunity to fight for the highest title in the world of chess – the title of the World Champion. 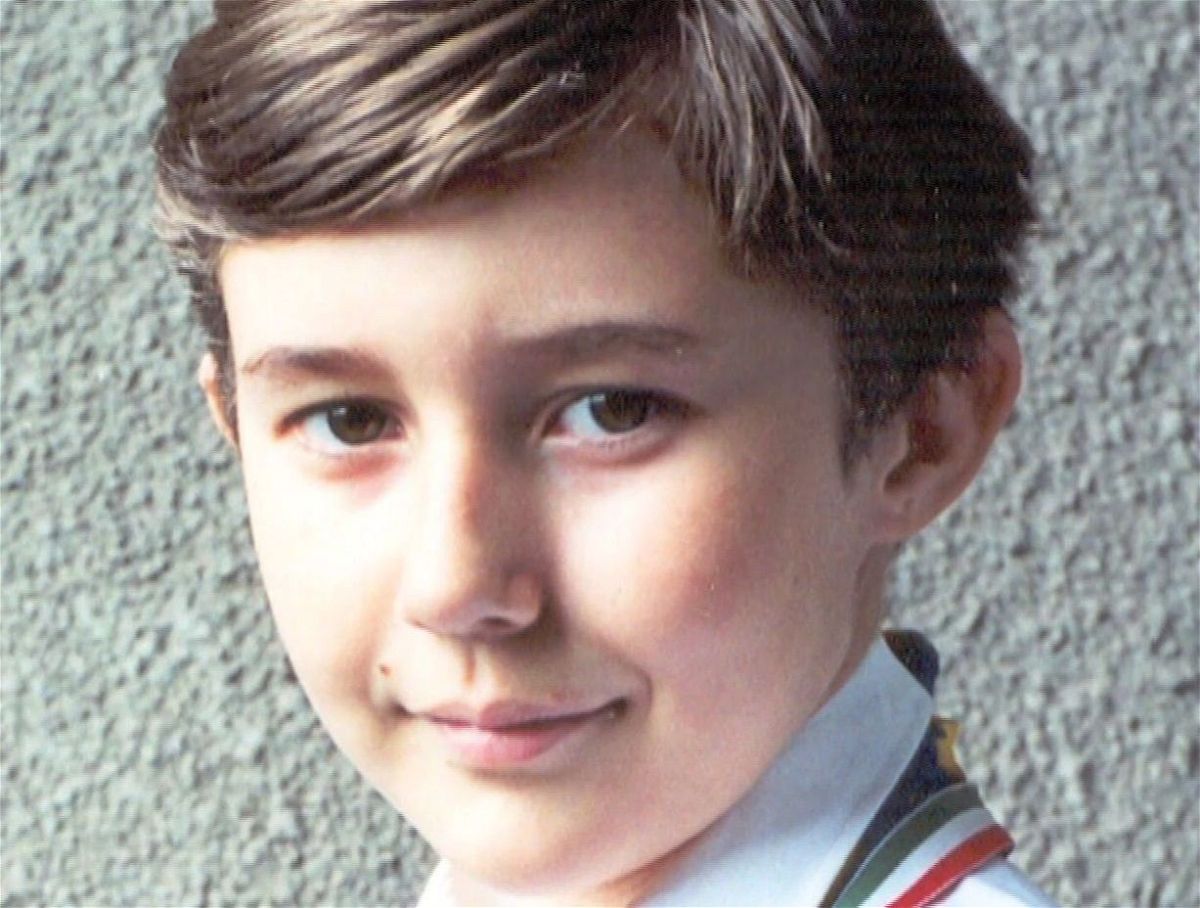 Sergey’s opponent, Magnus Carlsen from Norway, is considered by many as the greatest player ever to grace the game of chess. He got his GM title at 13 years and 3 months. While Karjakin struggled to get support and sponsors between the age of 13 to 19 years, everything fell in place for the Norwegian as he quickly rose in ranks and became the highest Elo ranked player in the world in 2011 with a rating of 2821. Since then Magnus has grown in strength, winning one tournament after another, and reaching a career high Elo of 2881. That’s 30 points more than what Garry Kasparov had managed at his peak. Carlsen also became the World Champion in 2013 after beating Anand in Chennai and defended the title once again in 2014 against the same opponent in Khanty Mansiysk, Russia. 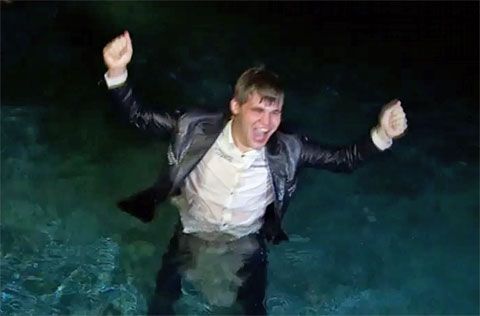 Magnus Carlsen on becoming the World Champion in November 2013

For Sergey Karjakin’s chess career switching federations from Ukraine to Russia when he was 19 was the best decision. He got the right people to spend money for his chess, hire coaches, pay for his training expenses and this helped him become the World Championship Challenger. 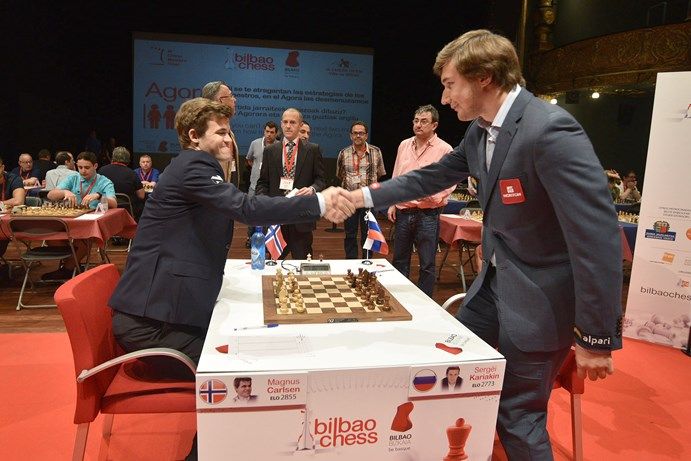 Three months before the World Championship Match, Magnus (left) and Sergey played each other twice in the Bilbao Masters in July 2016, and the result 1.5-0.5 in the favour of the World Champion. (picture by Bilbao Chess)

The World Championship Match was scheduled to be held in the Fulton Market, New York from the 11th to the 30th of November 2016. Magnus and Sergey would play twelve games against each other and the first to reach 6.5 points would be the World Champion. According to pundits and experts Magnus Carlsen was the favourite by a huge margin. Not only was he a better player than Karjakin, he also had the additional experience of fighting for the World Championship Match on two occasions previously. This first-hand experience is invaluable.

Some predicted that the match won’t even go the distance and would be completed in just ten games with seven draws and three wins for Magnus. While everyone was trying to decide on the margin with which Karjakin would lose the Match, the Russian was busy preparing hard with his team of seconds. Motylev, Dokhoian, Mamedyarov are some of the best training partners and Karjakin could afford them thanks to the support of the Russian Government. Systematic and meticulous preparation was Sergey’s strength and that was the only way he had any chance of beating Magnus. 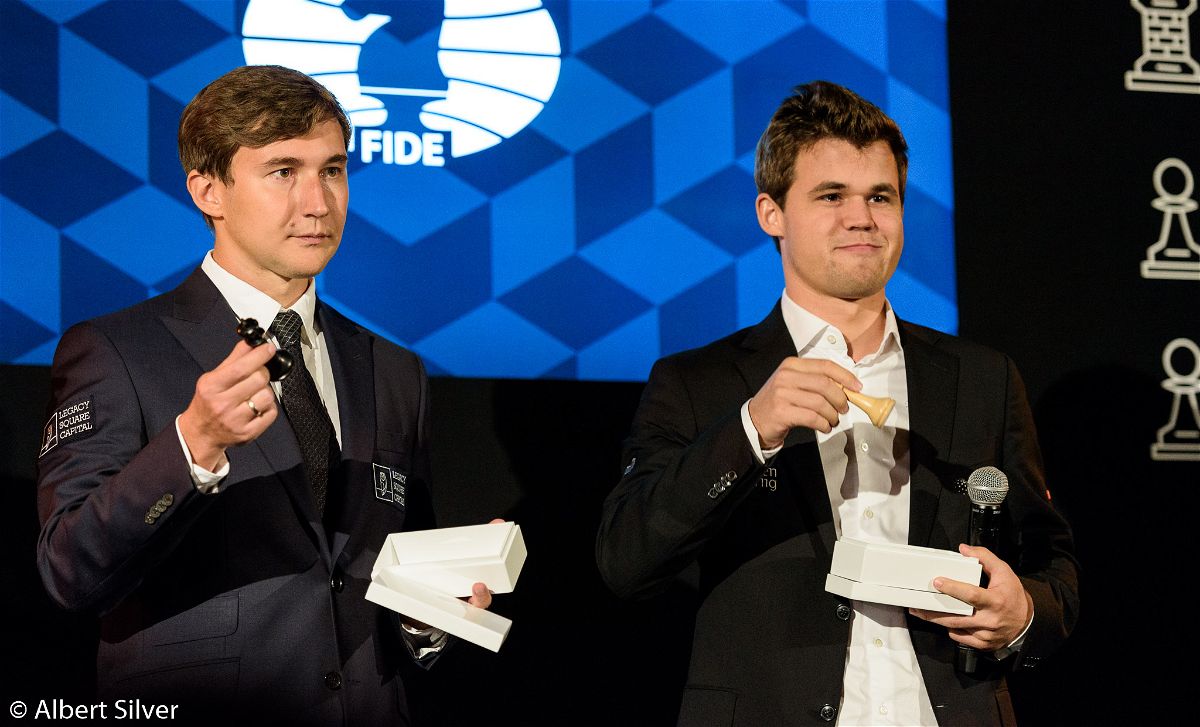 Magnus gets the white pieces in the first encounter of the 12 game Match. (photo by Albert Silver)

The first two games of the Match were uneventful draws. The players were feeling each other and slowly getting into the groove. Magnus even played the off-beat Trompowsky Opening(1.d4 Nf6 2.Bg5!?), which was motivated by the fact that Donald Trump became the US President!

In the third and fourth games Carlsen had clear chances to win. But Karjakin, who is known as one of the most tenacious defenders in the chess world, escaped with the draw in both the encounters. This was a clear indication that Magnus was the favourite and it was only a matter of time before Karjakin would succumb under the pressure and lose a game.

But Sergey turned out to be a hard nut to crack. As the Match progressed his confidence grew and without much diffifulties he drew the next three games. With seven rounds gone the score stood level at 3.5-3.5. That’s when the World Champion started to get impatient and desperate. 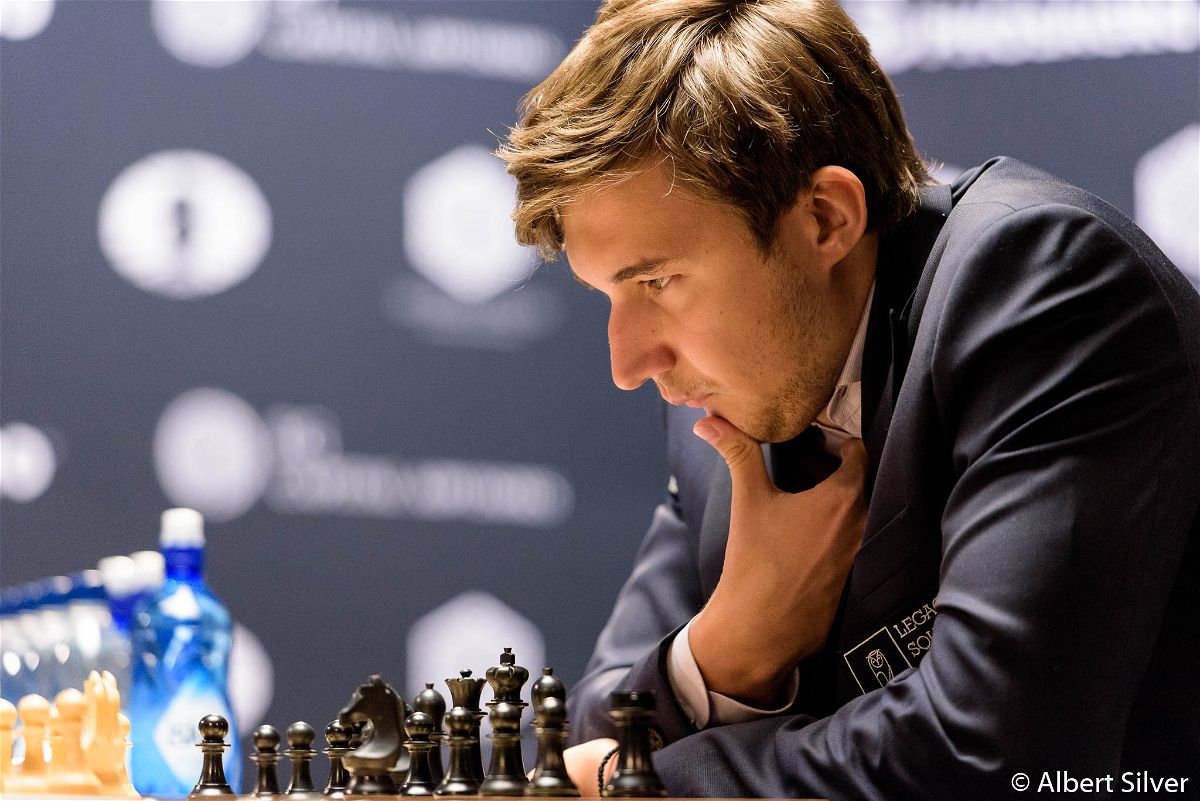 In the eighth round, the World Champion went overboard. Another draw was an unacceptable result for him. He wanted to win at all costs and took risks which the chess board didn’t permit him to. Karjakin won. It was an unbelievable situation for the chess fans all over the world as Magnus Carlsen, who was the clear favourite before the start of the match, was now trailing 4.5-3.5, with only four games to go.

In depth game-analysis of game eight 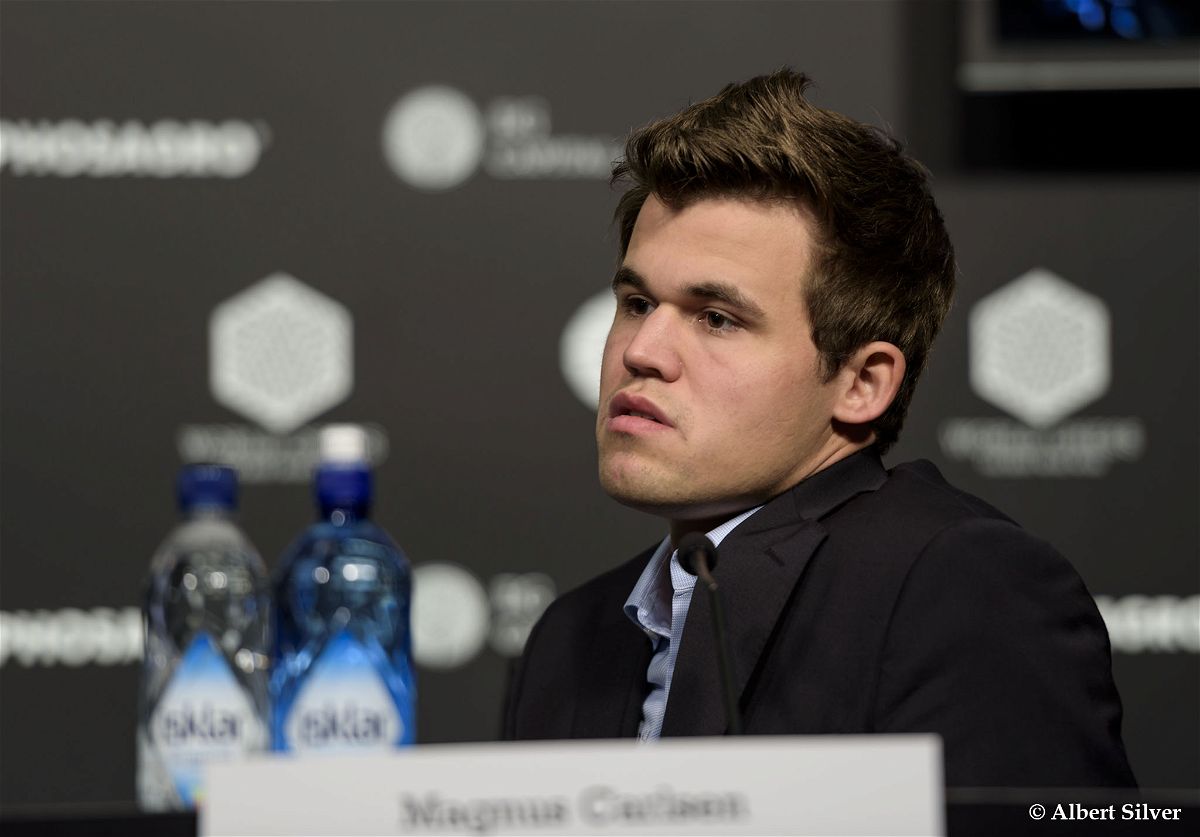 A dejected and heart-broken Magnus after his first defeat
(picture by Albert Silver)
A two-minute clip that shows Magnus tired and irritated at having to wait for Sergey at the press conference, and storming out

One of Carlsen’s best qualities is that he comes back stronger than ever after a loss. In the tenth game he gave everything that he had. After twenty moves Karjakin could have made a draw with accurate play, but he couldn’t find them. The game entered into an endgame where Magnus is clearly stronger than all of his rivals. Sustained pressure led Karjakin to make an error and Carlsen managed to win. The scores were now level at five points apiece with two games to go.

The eleventh game ended in a draw. 5.5-5.5. In the final game it seemed as if Magnus would press for a win with the white pieces. However, the Norwegian didn't try at all and the game ended in just 40 minutes in the symmetrical variation of the Berlin. Everything now hinges on rapid and blitz tie-breaks. One who wins it will be the World Chess Champion and can sit on the throne for the next two years. 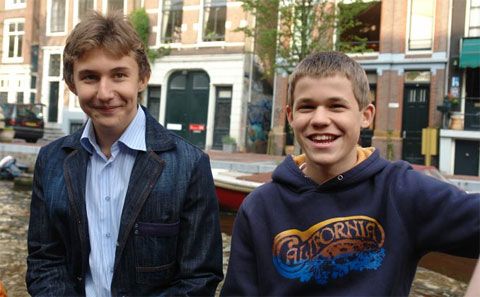 So what do you think? Will Magnus Carlsen defend his world title for the third time in a row? Or will Sergey Karjakin be able to fulfill his childhood dream of becoming the World Champion? Only time will tell.

Firstpost is a very popular online news portal in India. It's Twitter handle has well over a million followers. ChessBase India has collaborated with Firstpost and will cover the all the updates and news related to chess. This is sure to give more exposure to the sport and make it popular in our country.